This is a quick update with my latest Batman villain...Turk! 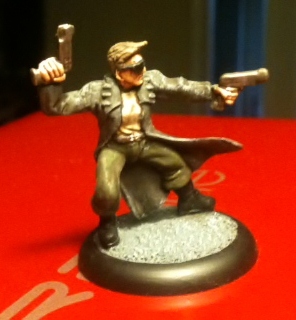 Don't recognise him? Thought not. That's because he's simply a henchman. The model is a repaint of a a Heroclix 'Hitman', a character I confess I'd never come across. I've done him as a quick re-entry into painting and so that I can have roughly even sides in my first game of the Batman Miniatures Game tomorrow against Matt.

I'll be running the Joker, Harley Quinn and Turk (a gun toting escapee from Blackgate Prison - as featured in the Blackgate Prisoners by Knight Models). You'll notice from the image below that there's absolutely no resemblance between the two...I don't care. He's not from the Batman universe, so he's open to interpretation. For the sake of argument, let's say that I've painted him as he looked before he got put away.

Matt will be running the Gotham City Police Department SWAT team led by Comissioner Gordon (another set from Knight Models) using his own collection of SWAT miniatures from his own game 'Flashbang!'.

One of the beauties of the Batman Miniatures Game is that all the rules and stat cards are available for download so you don't have to use their models to play the game. Although this seems counter intuitive to selling miniatures, I think it's a great idea as able to cheaphammer where I can but still pick up their models to round out my collection (I recently got Mr. Freeze to add to the cops and Killer Croc, and I've got my eye on the Dark Knight Rises Bane). This is a particularly good feature given the variable scale and quality of the Heroclix miniatures that I'm mainly using.

The flip side of this is that you can't use characters which don't have models yet, such as my Firefly. However Knight Models are releasing miniatures at a surprising rate so it's really just a matter of time.

I'll post a write up and review of the game later in the week.
Posted by Kieron at 12:17