Last Saturday saw the first battle in our Firestorm: Lorraine campaign. Rather than play three player, I opted to sit it out and act as war reporter (my cyber-bullying of Matt resulted in him bringing a proper camera), whilst Pete and Matt duked it out. We merged out armies to give a greater range of choice and allow the game to reach 2000+ points.

According to the campaign rules we determined that Matt, as the Americans, would be making a Hasty Attack across the Moselle river just south of Luxembourg in an attempt to cut off the FHH Panzerkompanie from supply and make them easier to defeat. Matt's invading force was appropriately chosen from the Blood, Guts and Glory, 4th Armoured Division list (Confident Veteran) and consisted of:

Rather less appropriately, Pete used the Herman Goering Panzerkompanie (Confident Veteran) from Dogs & Devils. The reasoning behind this was that Pete's Germans are actually Early/Mid War and so there are limited lists that allow him to use them in Late War. Purists might find the images below disturbing as you'll have to imagine the schurzen on several tanks and I suspect that the guns aren't right either. It's sort of proxying but all Panzer IV tanks are Panzer IV tanks and so on. His list was as follows: 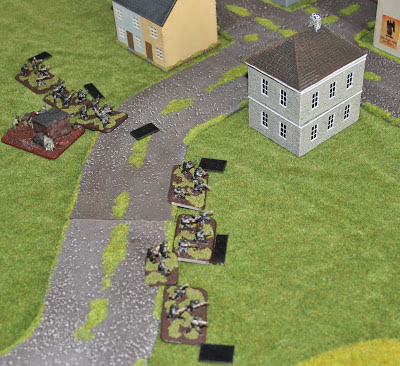 Dig In!
On the German left, the CV Grenadiers occupy two trench lines (the other was in the middle) protecting an objective which Matt would choose to remove, leaving the poor infantry over-extended and far from help. 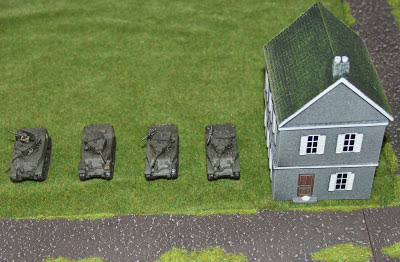 Gentlemen! Start Your Engines!
Opposite the infantry, a platoon of Stuarts revved up ready for some trademarked flank-turning. 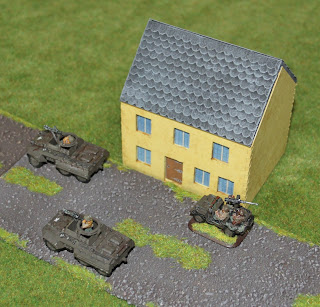 Engage Warp Drives!
Supporting the Stuarts were the Tank Destroyer Security Section. Not only would these be able to support the slaughter of the infantry, but their invisible friends would also provide an effective counter to any late arriving Panzers. 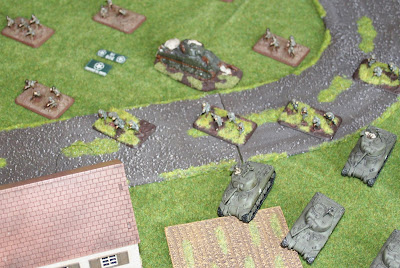 On Your Marks!
On the opposite flank, American infantry and Shermans surround an objective which will play little to no further part in this battle report...did I just give away the American strategy? 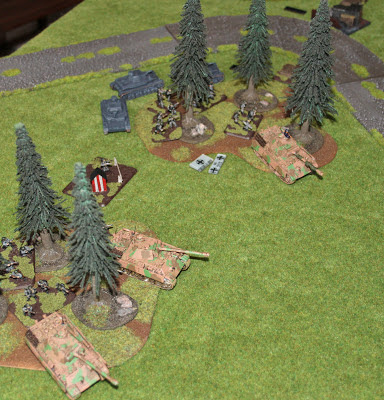 The Far Right.
Judiicious use of an immediate ambush sees the Panthers arrive to support the CT Grenadiers, the CiC and the Panzer IV Kampfgruppe in defending the other two objectives on the German right. The Americans had a platoon of Shermans, a Platoon of Stuarts and a Recce Platoon in reserve. The Germans had two pairs of Panzer III's, a pair of Stugs and a Recce Platoon as well. 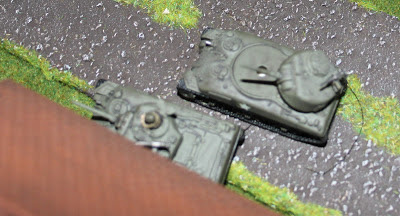 First Blood.
Sporadic German fire takes down the only Sherman foolish enough the pop out from cover. 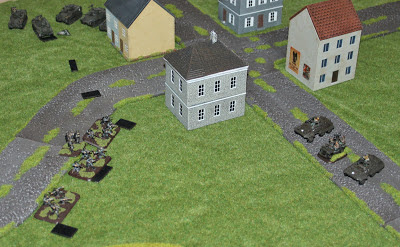 Go And Get 'Em!
The Stuarts molest the trenches, whilst the TD Security Section sprat the survivors with MG fire. Given how he attacked here, I'm not entirely sure why Matt removed the objective on the left. I'm sure he had a plan. 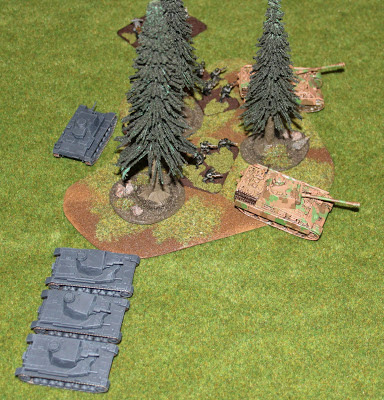 The Iron Curtain.
Panzer IV's and Panthers form an impenetrable wall and keep the Shermans' heads down. 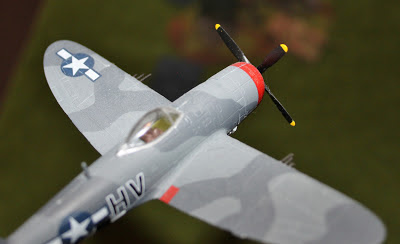 Incoming!
The P-47 Thunderbolts show up and begin what would be a somewhat underwhelming performance from them - the destroyed a single tank in the entire game. 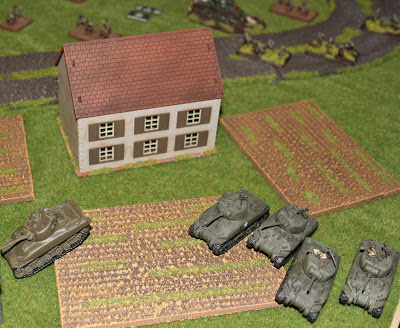 The Better Part Of Valour?
The Shermans break cover to take the fight to the Panzer IV's. They fail to destroy a single German tank. In return, combbined Panzer and Panther fire destroys two and breaks the remainder of the platoon. 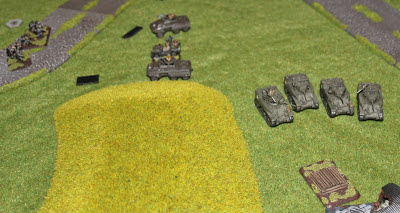 We'll Be Home For Christmas!
The Security Section finish off the remains of the Grenadiers, whilst the Stuarts trample HMG nests in their thrust towards the central objective. 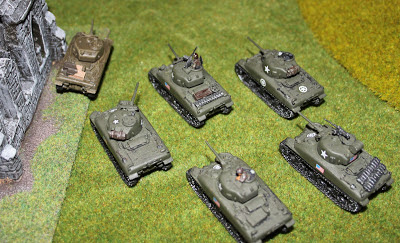 Here Come The Cavalry!
American reserves arrive. The second Stuart platoon follows the path of the first to occupy the village. The second Sherman platoon steams into the centre ground, whilst the Recce platoon moves cautious;y to support the infantry. 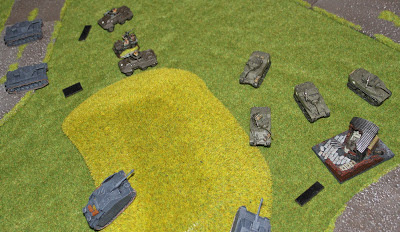 Killing Ground.
Stugs and Panzer III's arrive just in time to maul the Stuarts, contest the objective and send the Security Section scuttling for cover. 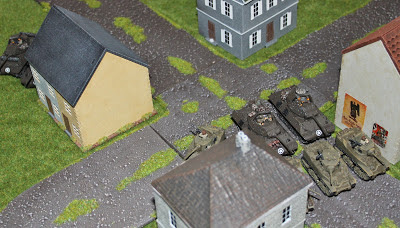 Target Acquired!
With German tanks in the open, the Tank Destroyers are called in to bring their big guns to bear. However, they begin a long range duel with the Panthers which prevents them from haing a significant effect. 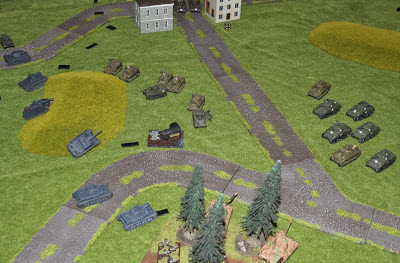 Nothing Ventured...
Under pressure from the Panzers, the Americans push a second Stuart platoon into the teeth of the Germans, whilst the Shermans rush headlong towards the Panthers' jaws. 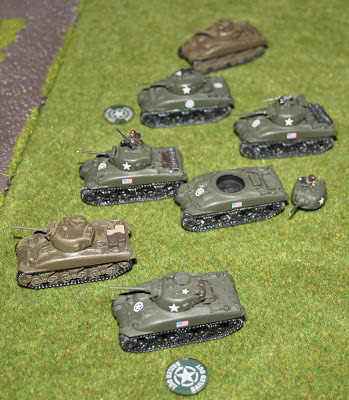 ...Nothing Gained...
The Shermans take heavy fire, blunting their attack. 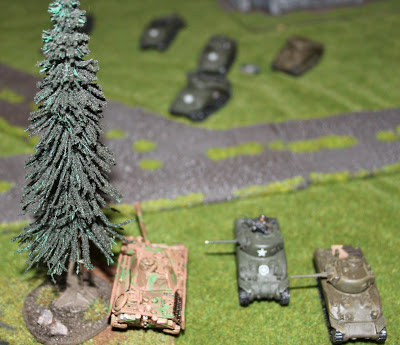 Knife Fight.
Two Shermans, including the 2iC make a push to get shots into the vulnerable side armour of the Panthers. Their stabilised shots go wide, leaving the two tanks horribly exposed.

Cannons To The Left Of Them...
The Shermans are gutted by short range fire from the German big guns. 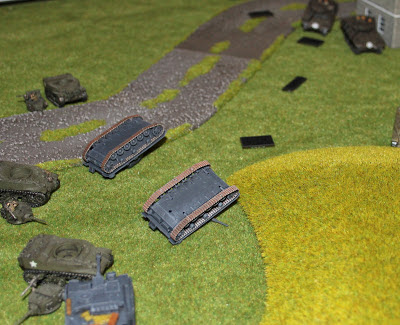 Cannons To The Right Of Them...
Meanwhile, the Tank Destroyers shift their focus and begin to eat medium tanks for breakfast. 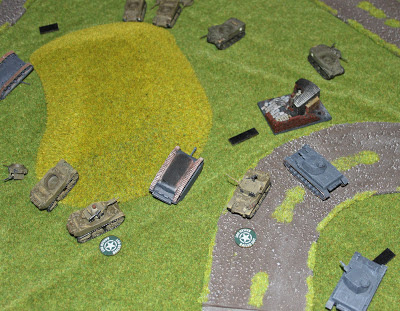 Swirling Melee
Stuarts and Panzer IV's circle each other amidst the burnt out wreckage of ally and enemy alike. 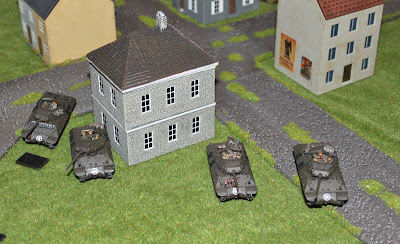 Move In For The Kill
Tank Destroyers break cover to concentrate their fire power in an attempt to nullify the Panthers. 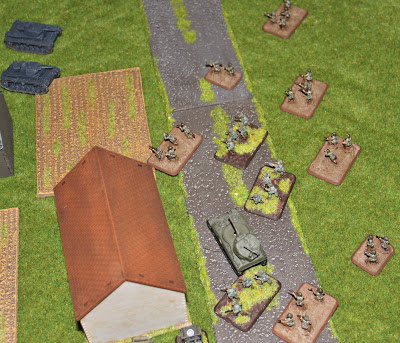 Pyrrhic Victory?
Despite their losses, the Americans can still sense an opportunity if they can get their infantry across the battlefield fast enough. 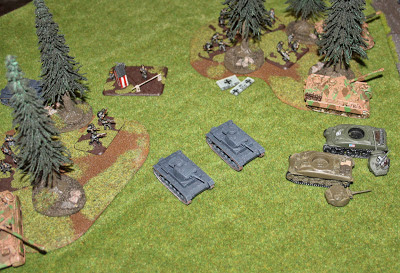 Indomitable
The German positions look much as they did at the beginning of the battle as they await the final push from the Americans.

Outgunned!
Failure to damage the Panthers proves costly as the big cats find their range and beat the M10's at their own game. 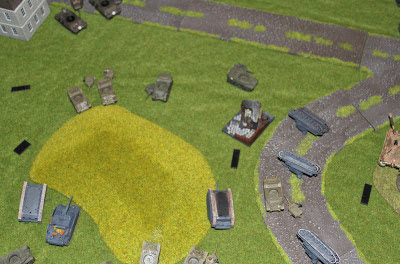 The One That Got Away
A single Stug survives the carnage surrounding the central objective. 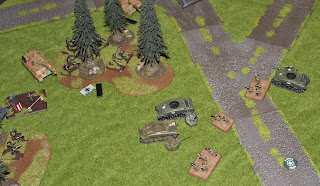 A Branch Too Far
MG fire from the woods nullifies the threat of the US Infantry as they skulk amongst the charred hulks of their armoured support. 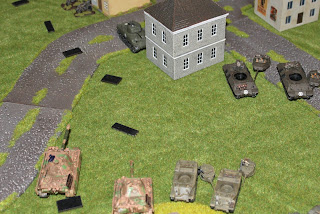 Prowling Panthers
The kings of the battlefield hunt down and destroy the last American tanks, forcing 4th Armoured to break. The Moselle bank had been held...for a while...

This was actually a really enjoyable game to watch. If I was asked, which I haven't been, I'd offer the following tactical snippets:


So the Germans held on (the score was 4-3). We forgot to roll for Firestorm Troops at the end (because it was getting late) but I rolled for them later and neither unit of infantry were destroyed. In terms of the campaign, not much has happened. The Allies have lost an opportunity and wasted an air sortie,and by starting in the lead, the status quo suits the Germans. 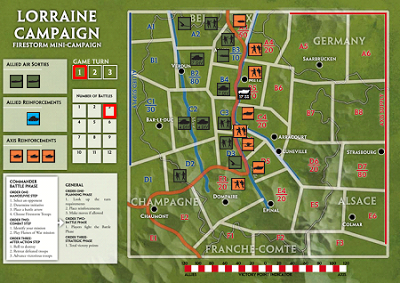 I'm not sure when the next game will be, but this game has left me certainly wanting to get stuck in.
Posted by Kieron at 15:43