Hello again. It's been a while.

Why've I not been blogging? Well, long-story-short, we've been trying to sell the house and so my painting stuff has been safely tucked away. However, the house is now safely sold and I can get going again.

First up, some of Gotham's finest for my Gotham City Project: 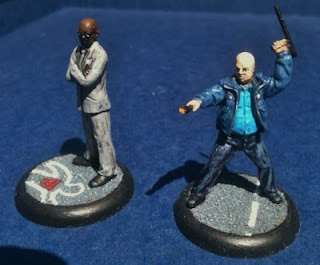 The chap on the right is a Heroclix Detective who, although not a sparklingly interesting mini is more than suitable for my needs. My continuing attempt to make my bases more interesting has resulted in an attempt at an outline for a body along with bloodstain. I have been considering adding a couple of evidence tags as well, but overall I'm happy enough with this chap. 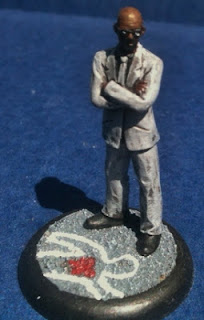 The beat cop is my first Knight Models miniature. You may remember me bemoaning the poor customer service of an online retailer. Well, after kicking up a bit of a fuss I finally got my order. Even though the problems weren't entirely their fault, I won't be using them again as their communication was shocking.

However, I was delighted to find that despite much internet wailing an gnashing of teeth, the Knight Models sculpts scale perfectly with the large Heroclix models I've been using. They're lovely sculpts although the spindly bits are a bit fragile (I broke his baton and had to replace it). I still need to add GPD to the back of his jacket and I'm considering adding a couple of traffic cones to the base. 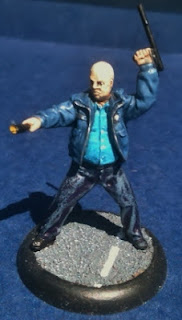 I've also added a unit to my America Flames of War force. It's a recon platoon backed up with .50cal AA MG's and a Bazooka. I've really enjoyed painting Americans as they're a bit more interesting to do than how I've been painting my Germans - they're also somewhat more historically accurate. I'm also pleased with the bases as I've gone for something that can pass for North Africa, Italy and France in the summer. 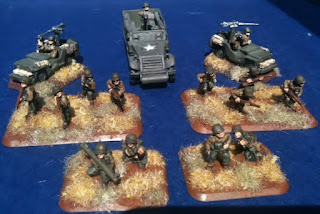 On a final point, for those that don't know, our wargaming club has recently folded. A disappointing development, however not feeling bound to a particular gaming night every week is already proving to be positive as I'm arranging games with people (who aren't members of the club) who I haven't played in ages. It's an ill wind and all that...