This is the first of two posts detailing my recent exploits on the Eastern Front in games of Flames of War. Last Saturday, in our second gathering at Pete's my humble Panzergrenadiers took on Pete's wall of Soviet armour.

The scenario was one I'd never played before - Counter Attack, I've always rolled randomly for scenarios and so there are a couple that just haven't come up yet. Cauldron is another one. This detail does mean, as you'll see, that there are tactical elements of the game that catch me out when I play a scenario for the first time.

The lists were, to the best of my knowledge, as follows:

Apologies for the appalling photos; it's Matt's fault...

The dug in Panzergrenadiers await the coming storm
The objective is in the woods, which are covered by a minefield on the flank. The Marders are in ambush and the Panthers reserve 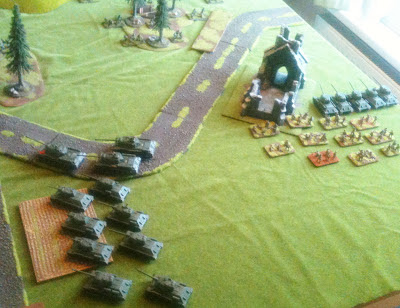 The iron fist of the Soviet Union prepares to strike!
Infantry and the smaller unit of tanks threaten the defended objective, whilst the majority of the armour heads out into open ground. 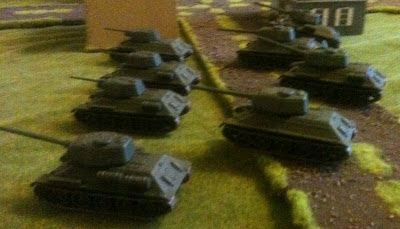 The assault begins...
Unsurprisingly, T-34's begin to rumble off to my undefended objective. 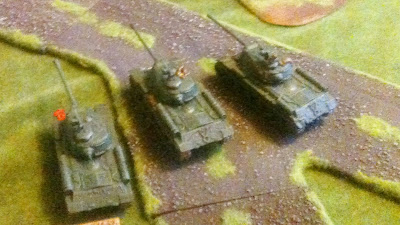 Heavy metal!
They are ably supported by the SU-85's (if that's what they are) 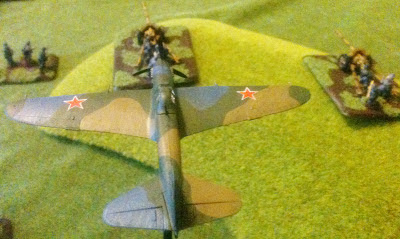 Look to the skies!
The Sturmoviks begin their somewhat ineffectual harrassment of my lines. 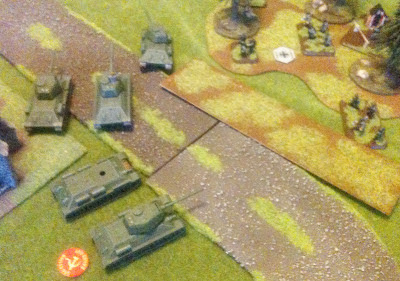 Gotcha!
The Marders spring their ambush, ending Soviet hopes of an early assault on the defended objective. 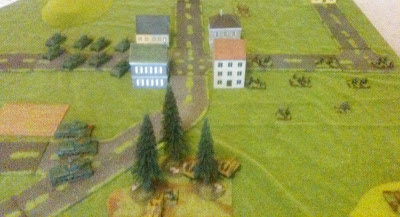 Schnell! Schnell!
Panzergrenadiers begin to leg it towards the undefended objective. It doesn't look good as they're racing tanks. 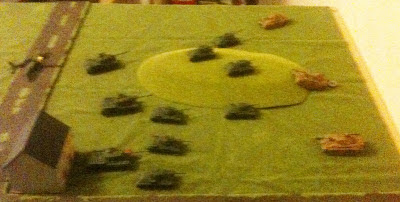 Hunters become prey...
My Panthers arrive, destroy a single T-34 and are then swamped by the Soviet tanks. On the up side, destroying my most expensive unit, does distract them from heading towards the objective for a turn. 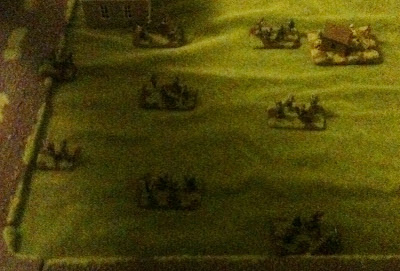 Dig for victory!
Out of breath, the Panzergrenadiers reach the objective and brace themselves for impact. 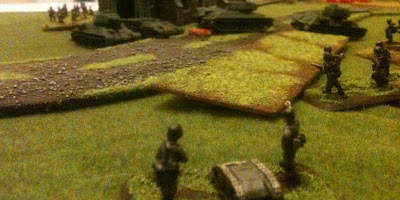 The one that got away...
Panzergrenadiers, Marders, Mortars and PaK 40's (but not assaults due to failed tank terror tests) take down all but one of the T-34's on the left, eventually forcing a failed morale check. They then begin to trade MG fire with the Sappers who refuse to leave the cover of the ruins. 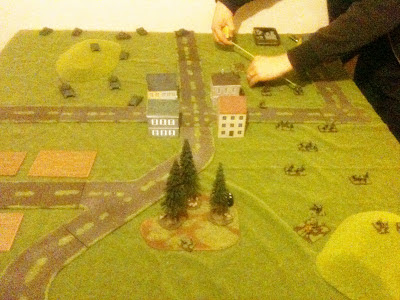 Desperate measures!
The Germans try to rush support across to the other objective, but to no avail. They cannot stop the flood of tanks and the position is lost.

That went badly from start to finish. Pete did everything he needed to in order to defeat me in detail. I made a number of errors too:


I was properly beaten in this game and in response to this defeat, when I got home I immediately ordered some anti-aircraft guns with an Amazon voucher I've been struggling to decide how to spend. I've also promised myself some Zvezda trucks and Panzerschreks from Triples in a couple of weeks.

I'll put this one down as a learning experience...next stop, Round 2!
Posted by Kieron at 10:24