As I mentioned in a previous post, the demise of our regular club has had the unexpected up side of forcing me arrange games with people I haven't played in a long while. Therefore, on Tuesday I arranged a game with Bill, who i don't think i've played in at least 18 month, at my house.

The game was only 1000 points because I currently only have access to a 3'x4' board. For simplicity's sake, we decided to play Free-For-All with only a single objective each, simply because objective would be so close together that they might as well count as one.

Bill took Tankovy from 'Red Bear', whereas I took the opportunity to try out the Reluctant Trained Panzergrenadiers from 'Blood, Guts & Glory'; mainly so that I could still use Panthers without being crippled in a small game, but I was also conscious that the infantry would be packing Panzerfausts on each stand (consider that lesson learned from the last game).

The lists were as follows:

You'll notice that the photos are much better...that's because Matt wasn't involved... 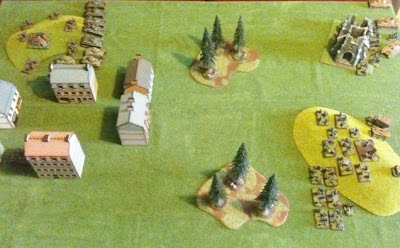 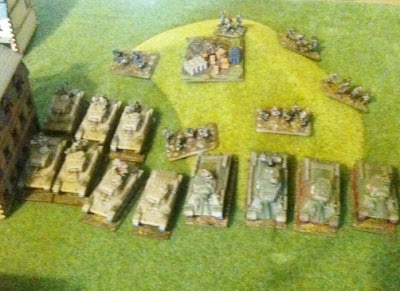 Operation N.C.P.
Lack of artillery or air support meant that the Soviet tanks could bunch up to their hearts' content. 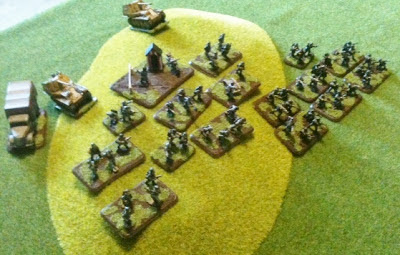 The Kop.
Likewise, the German infantry adopt the 'mob' formation. 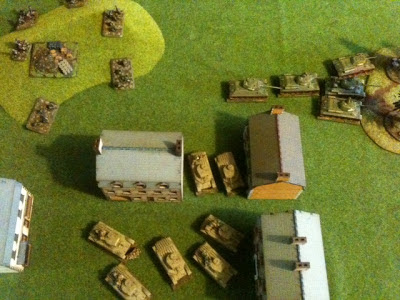 Bait and Switch.
The Matildas dive to the right, out of the Panthers' sights and towards the objective. Meanwhile, the T-34's take cover behind a single tree. 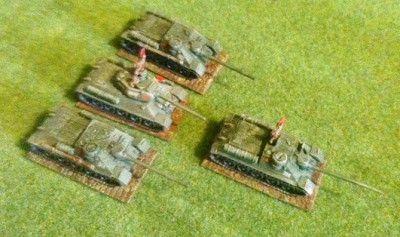 Big Guns.
The Soviet commander and the SU-100's rumble forwards to take advantage of their range superiority. 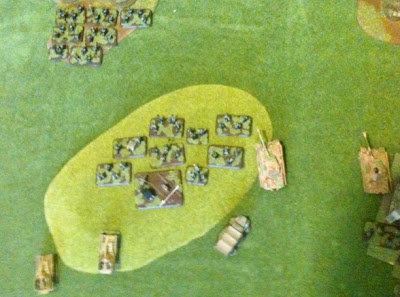 Operation Speedbump.
While the German big guns open up, bailing a T-34 and destroying an SU-100, Panzergrenadiers rush forwards to the cover of the trees with the sole aim of dying slowly under the tracks of the Matildas. 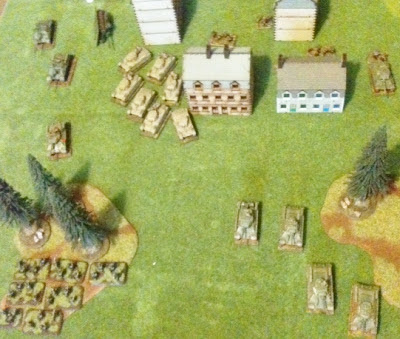 Forward Comrades!
Knowing that they can't survive a long range duel with the Panthers, the T-34's rush forwards hoping to draw fire away from the steadily advancing Matildas. 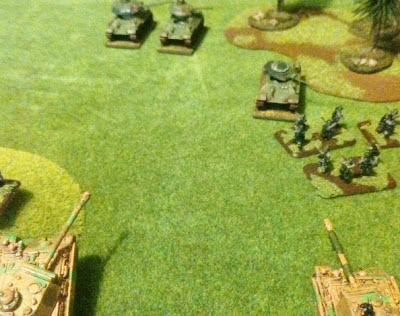 Open Fire!
Concentrated fire from the Marders and Panthers wipes out the T-34's and without an assault to launch the Panzergrenadiers look cheekily towards the undefended Soviet objective in the distance. 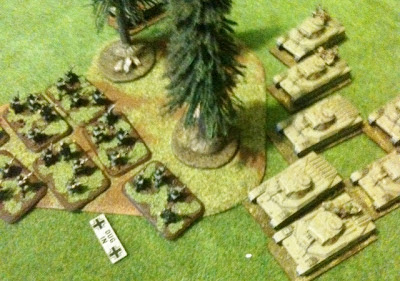 If you go down to the woods today...
Needing to make headway, the Matildas pour fire into the dug in infantry, pinning them prior to launching the assault which will crush them and open the path to victory... 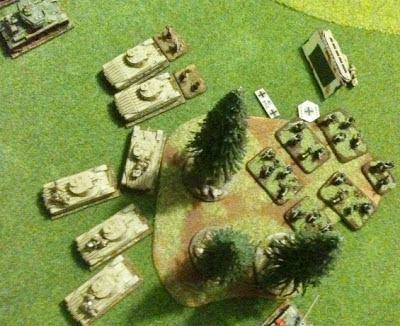 ...You're sure of a big surprise...
Despite being pinned, accurate Panzerfaust fire destroys one tank and bails two, driving off the assault and leaving the Matilda's stranded in the open and easy prey for massed Panther fire that destroys the platoon. 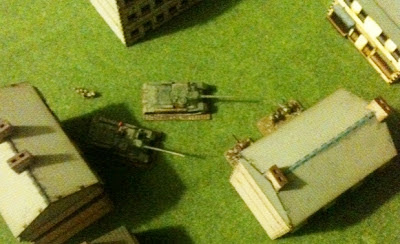 Run Away!
With only three tanks and a handful of infantry remaining the Russians retreat to the cover of the town and set up defensive positions to protect the objective from Panzergrenadiers sneakily doubling down the flank. 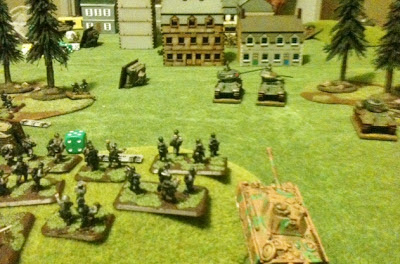 All Quiet on the Eastern Front
With the Soviets safely ensconced, the Germans settle in for long range shelling of the communist positions.

Admittedly, it's a 3-1 rather than a clear cut victory, and Bill's army list was somewhat hurriedly put together and was pretty much the natural prey of my list, and we were on a narrow table where the mobility of a tank company are largely negated, and I could operate without fear of bombardment...but a victory nonetheless. I feel like a striker in a dry spell and I've just scored with my arse - it still counts!

Contrary to the previous game, I did things right. Even without the Panzerfausts, the Matildas would have been in a world of hurt had they destroyed the infantry in the forest. I concentrated fire much more effectively and also didn't just sit back and react. Overall I'm quite pleased with the outcome.

The fact that my troops were reluctant was never put to the test, but being trained did cause problems for the Pioneers digging in, even with the supply truck. I'm not sure that this will be my regular list. However, it's a nice change to have numerical superiority once in a while.

It was great playing Bill again and I'm looking forward to more games with people I haven't played for some time.
Posted by Kieron at 12:09