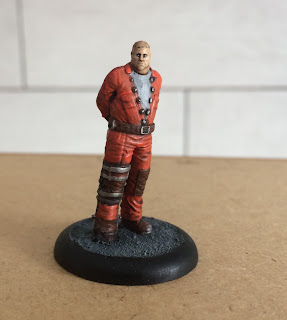 Not my best work by a long way, but good enough, given that the actual model is fairly dull. I've tried to get the dates he has tattooed around his head done, but they are a bit wonky.

In game terms Calendar Man is a slow moving assassin, who is quite durable, and has abilities that allow him to mess with your opponent. Amusingly, he has a variable trait that is different depending on which month you are playing the game in. This not only makes him interesting to use, but also means that your opponent will probably never be fully aware of his capabilities.

I'm going to a tournament in May, and there's a very good chance that Calendar Man will feature in my crew. For reference, his bonus trait in May is Disarray, allowing to mess with enemy counters.
Posted by Kieron at 06:38