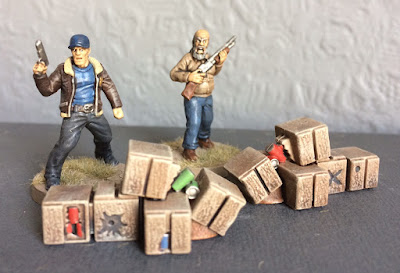 Another week and a few more Walking Dead: All Out War miniatures. This time it's the Shane booster pack which can with three miniatures, two character cards and four equipment cards to add extra elements to your games 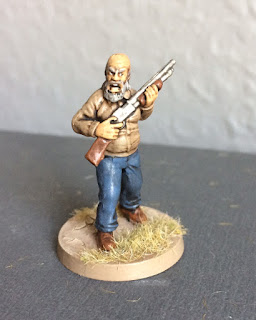 First up is Reggie, who is apparently based on the comic book criminal that shoots Rick, putting him into a coma for the beginning of the zombie apocalypse. In the game, Reggie is a basic mook, who can be added to any group, but will most often find himself alongside the likes of the Governor, Negan and other bad guys, simply because there are already plenty of Rick's group to choose from.

I kept to a very basic paint scheme, simply because I couldn't see a reason to do anything special with him. I'm quite happy with how he's turned out. 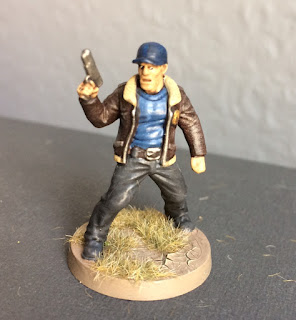 I really like this model, event though, like the rest of the range I've seen, it's a really simple sculpt. The jacket has enough details (the trim, the badge, the pockets) to really make the model 'pop'. I did contemplate putting 'police' on his cap, but my freehand lettering is always terrible, and I didn't want to ruin a model I liked so much. 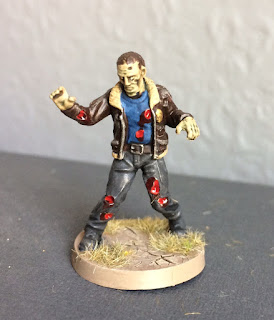 Typically, each booster pack includes a walker, and amusingly, this pack contains Zombie-Shane. This made painting him even quicker than usual as I didn't have to make a single decision about colours, as I just painted him in tandem with Shane, using exactly the same palette.

My only gripe with this set is that Zombie-Shane's base is slightly warped. I probably could have fixed this with the hot water trick, but I only noticed once he was finished.

It remains to be seen whether I'll use this model as much as the other walkers, simply because he's so recognisable, however, there is a mechanic in the game where characters killed by walkers or bites are replaced with a walker, and so I'll always keep him on hand when Shane's in use.

Finally, I've painted a couple of piles of boxes of canned goods. These are from the Mars Attacks game which I don't really play. There are a range of terrain pieces that are more than suitable for adding to my games of The Walking Dead. These will serve equally well as either small barriers for cover, or supply tokens.

I continue to really enjoy painting this stuff up, and so expect to see more in the coming weeks.
Posted by Kieron at 05:49