Panic in the Streets!

Keeping up with my frankly blistering pace of blogging at the moment, I've done some more models and terrain for The Walking Dead: All Out War. This time I've done the Lori and Andrea booster packs and some more scenery from Mars Attacks. 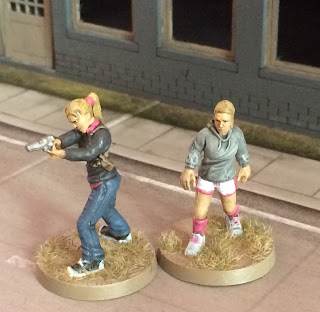 Beginning with Andrea; she comes with her little sister Amy, and these two are amongst my favourite in the range. The contrast in pose and outfit between the two sisters sums up their differing personalities perfectly: Andrea is read for action and determined to survive, whilst Amy's best bet is to run away. I've tried to capture this in the colour schemes too, with Andrea in darker, more practical clothing, whilst Andrea is in naive, innocent white and stands out like a McDonalds Drive Thru at night. However, I've used the same pink and hair colour to still tie the two together.

In game, Andrea is a marksman and a capable survivor. This is important to me, not only because I liked the character in the TV show, but also because the rest of the female characters available for TWD at the moment are so damn feeble. Amy typifies this, and is only marginally better if she stays close to her sister. I expect, as in the TV show and comic book, Andrea will appear much more than Amy... 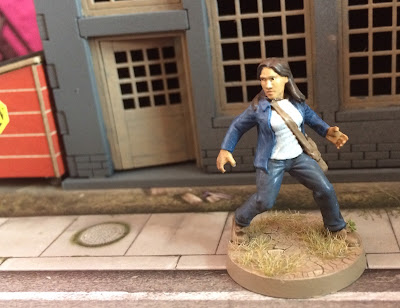 Lori Grimes is Rick's wife and Shane's erstwhile lover and at the apex of a very eventful love triangle...something which seems odd, if Mantic are to be believed in their sculpting, because she apparently looks a bit like Noel Fielding.

Manly jawline aside, I like the fact that this model, like others, is unarmed, as it captures the idea that not everybody is a gun-toting maniac. I've kept the colour scheme simple, but tried to reflect her costume from the TV show (although I'm not painting checks on her shirt).

In game, she's marginally better than Amy and Carol in that she has medium rather than low nerve. However, she's not brilliant in a fight, has no special rules and is only a support character. She's definitely a thematic, rather than a tactical choice. 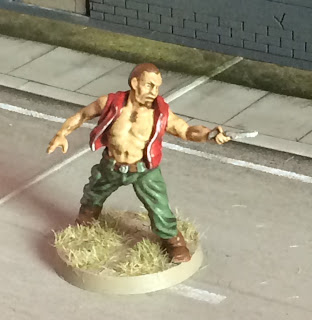 Craig is a generic bad guy (apparently based on a character who's gang attacks and attempts to assault Carl before Rick bites his throat out) who comes in the Lori booster. I've given him a very simple paint job (which isn't helped by the poor photo) as he's never really going to be massively important to the games I play.

I like the fact that Mantic are including generic bad guys, as it means that they can be used to create player vs player games that are more thematic than continuous civil wars within Rick's gang. 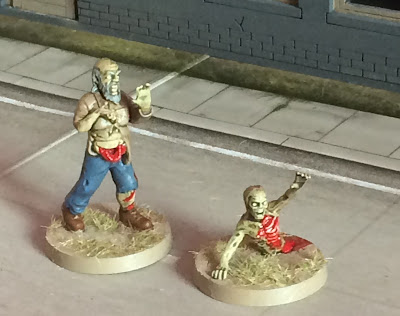 As ever, there was a Walker in each  booster pack. Actually, Lori came with a Crawler rather than a Walker, and I got to slap blood effect about liberally as it drags itself along.

The Walker from the Andrea box may look familiar as it appears to be a zombified version of Reggie from the Shane booster... 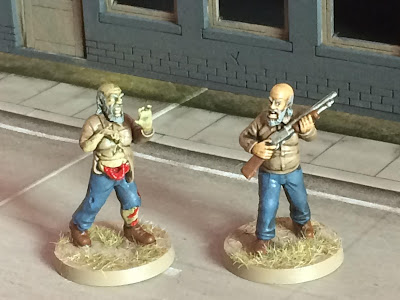 Apparently, in the comics the Walker that (SPOILER ALERT!) kills Amy looks a bit like the criminal that shoots Rick in the first issue (which Reggie is based on), and Mantic has decided to link the two. This is a nice touch as is means that there are a few character for whom there is the option of properly zombifying them if they get killed in game. 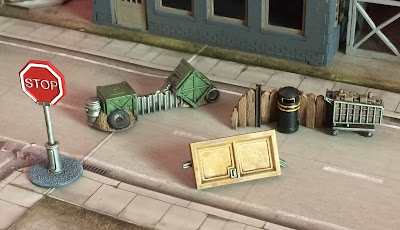 The Mars Attacks scenery is proving really easy to paint quickly and seems just as appropriate for a zombie apocalypse as an alien invasion. I'm pleased to be getting some use out of this as largely I found the miniatures in Mars Attacks a bit disappointing as they were a bit too small to scale with other ranges. I'll get round to painting the Martians some day (as scale accuracy isn't really a massive issue for aliens), but for now, the barricades will see good service in games of the The Walking Dead.

I've only got a handful of scatter terrain pieces to do now, and I'm still undecided whether I'm going to use the ruined buildings that come in the Mars Attacks box. However, there's still a steady flow of miniatures and game to come over the coming days.