It's been a while since I've painted some BMG stuff, so I thought I'd ease in with something fairly straightforward Talia Al Ghul (comics version) and the ninjas Shadow and Seeker. 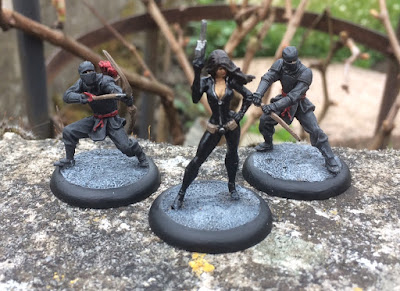 Talia provides an alternative to my tournament version. She's not as good in close combat, but has a more effective ranged attack with her Mauser and the Master Marksman trait. She's also more of a command model, bringing additional funding to the crew (effectively making her own cost $0) and having the, somewhat situational ability to allow henchmen to attack out of their own activation.

In terms of painting, I went back to the method I used for Catwoman, and used an ink for her catsuit to let light do the highlighting work for me. It's only something I do on characters that suit shiny skin-tight numbers, but I like it. 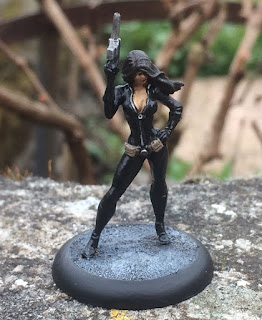 Shadow is a ninja who is determined to face down super humans and vigilantes, armed only with a stick. Sensibly, his Stealth, Undercover and Sneak Attack allow him to pick his fights to some degree. However, I can't see him doing much damage. Of more use is his potential ability to protect other, more important members of the League; his smoke bomb can provide cover from enemy snipers and he's a suitable recipient of Loyalty Tattoos which would allow him to act at a bodyguard given that he's clearly not as effective as the other ninjas.

In terms of painting, my ninjas push the three colour minimum tournament rules to the limit. Technically, if you count washes, there are actually six colours being used on Shadow. A really simple job. 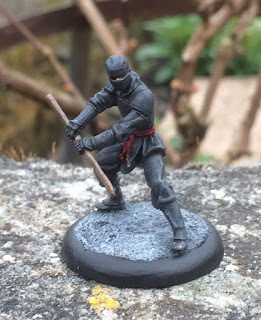 Shadow is slightly more sensibly armed. His bow brings additional ranged capability tot he League without having to turn to expensive Free Agents or theme-breaking Bane Mercenaries. In fact, with night vision goggles and extra ammo, Shadow is able to keep enemy heads down; especially those who are able to bypass the League's stealth. 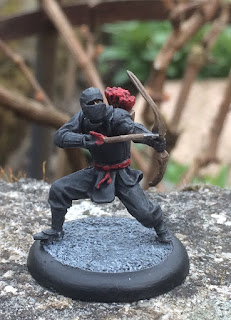 Overall, these three make my League of Shadows crew (currently my most unsuccessful crew - Played 4, Won 1, Drawn 1, Lost 2), a bit more effective and less vulnerable to to enemy shooting. I'm not sure when I'll get a chance to use them as other crews are still waiting for their first games, but the chance to actually shoot back does mean that using the League is now at least a possibility.

You may notice that my posting frequency has increased over the last couple of days. This is due to me not only being on holiday, but also being in the mood to paint and play. So you can expect more over the coming days.
Posted by Kieron at 13:17