Vicksburg: Gibraltar of the West 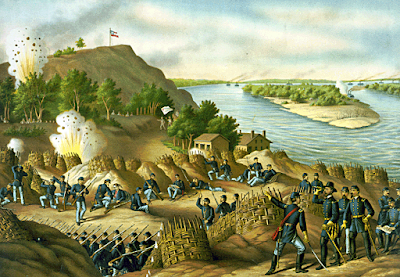 I've been threatening to do a campaign for a while, and a couple of weeks back we managed to get started on one. It's a American Civil War campaign set in 1863 featuring, unsurprisingly, the Union attempts to capture the Confederate stronghold of Vicksburg in order to free up the passage of the Mississippi and cut the Confederacy in two.

I'm not going to go into the history as, if you're interested, there's a plethora of resources available online, one of which is a set of free campaign rules for the game Altar of Freedom, which I've adapted for our use.

During this campaign, Matt and I will be commanding the Union army under General U.S. Grant as he takes the long route round to surprise and besiege Vicksburg. Meanwhile, Pete and Wes are controlling the motley collection of Confederate forces assembled under the hapless General John C. Pemberton, and potentially General Joseph E. Johnston, with the goal of holding of the Union forces for as long as possible.

The campaign takes place over 8 turns and each turn features an event card and various forces trying to outmanoeuvre each other. The campaign, realistically, is not likely to feature many major battles, but those that do happen will matter a lot.

What follows is an account of the first few turns. 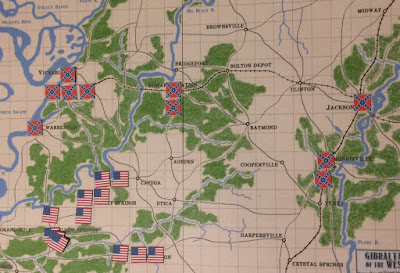 For the Confederacy, Pemberton's forces are mainly massed around Vicksburg, with outlying pickets and divisions stationed at Warrenton and Edwards Station. the city of Jackson is only sparsely defended, but the campaign allows for the possibility of reinforcement there, so any planned assault would have to be quick before it becomes too well defended.

The Union assault gets off to a slow start as all movement is severely hampered. McPherson's Corps trudges slowly northwards towards Utica, whilst McClernand's Corps limps towards the Big Black River, only to find that Confederate pickets (not pictured, for some reason) have destroyed one of the ferries, limiting their opportunities to cross. Sherman's Corps is completely unable to leave Willow Springs due to the inclement weather. There is some movement amongst the Confederate forces, but they are happy to sit tight and let Mother Nature fight on their behalf.

For reasons known only to himself, General Johnston evacuates Jackson leaving the Confederate forces under-supplied and with less ability to move and respond to the Federal army. Perhaps it was the fact that McPherson was clearly heading towards undefended Jackson, with some of his troops reaching as far as Raymond.

Meanwhile, Sherman finally gets his Corps moving north towards Warrenton whilst McClernand reroutes his forces to cross the Big Black at a different point, thanks to the actions of the Confederate pickets.

More misfortune for the Confederacy, however, in this case the intel received was their current score of victory points, and Matt and I were surprised that simply by the being no Union troops surrounding Vicksburg, Pete and Wes were already almost half way to victory.

Their discovery spurred the Federal troops into action. McPherson's Corps continued it's fast advance, cutting the rail lines at Clinton, in striking distance of Jackson. McClernand pushed on to almost the outskirts of Vicksburg, but was unable to make contact with the enemy.

This was not a problem for Sherman, however as Blair's Division clashed with Bowen's Division at Warrenton. Fully aware of the full might of the Union army massing in the countryside around them, Bowen retreated back to Vicksburg before he was cut off.

With Grant at the gates of Vicksburg, a major engagement was surely imminent.

McClernand was clearly unimpressed with the idea of leading the assault on Vicksburg and refused to move, so it was left to Sherman to initiate battle, which he did with zeal. Dispatching Blair after Bowen and then sending Steele across country to draw Smith into battle. This would surely pull Pemberton out from the Vicksburg defences and force McClernand to get off his behind and into battle.

A major engagement ends all further action for the turn as the battle is fought.

The Battle of Vicksburg

The coming battle is going to be a tough ask for the Union, who, despite having a slight advantage in numbers and artillery, will begin the game with only a single division deployed on the table, facing a worrying four Confederate divisions dug in around Vicksburg. However, as the battle goes on, reinforcements will arrive by road from the south, west and east, potentially allowing the Union to outflank the rebels and bring their numbers to bear.

The consequences of this battle could be dramatic. A rebel victory will surely see them amass enough victory points to be within touching distance of victory, whereas a Union victory will drive the Confederates out of Vicksburg and completely change the complexion of the campaign. This one matters.

The size of this battle required a bit of painting in order to provide enough troops, so I've done another three units of 6mm Union infantry, and a few more commanders. Technically, I've painted these units up as US Colored regiments (you might just be able to tell), but they won't serve in this capacity in the battle as we're a couple of years too early for them. 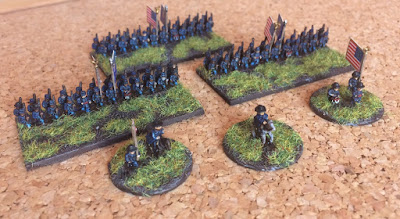 I now have all the troops that I need to be able to take control of Sherman's Corps in the coming battle. I will be attacking from the west, closest to the Vicksburg defences, whilst Matt, as the recalcitrant McClernand, will be entering via the east and south, rushing to support my advance units. I'm not sure how Pete and Wes are dividing their forces, but they will have to watch their flanks as the advance.

The results of the battle will be in the next post...
Posted by Kieron at 12:43