Inevitably, I've bought the Walking Dead: All Out War game box - along with numbers of other boosters and expansions which are all now in the painting queue. I'm going to aim to get them done in the order I need them for the scenarios I'm planning to play for my comic book campaign. I've got my eyes on doing my first custom scenario following the Governor on his road to Woodbury, and for it I will need some henchmen for him to lead. 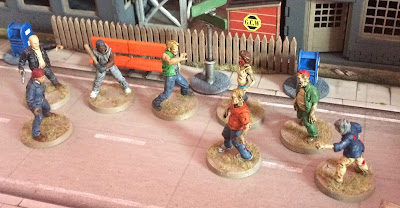 This group of ruffians are actually from much later in the storyline than the Governor (they are replaced by the 'Wolves' in the TV show), and really only feature in a single issue, but seem to have been included in the main box as opposition for Rick's group that won't have much appeal as the subject of an expansion (especially when you compare them to the Prisoners, Woodbury, the Hunters and the Saviours). In terms of my games, you can expect to see them lining up alongside numerous villains.

A nice touch is that Mantic have provided alternative cards for all but Liam in different expansions which increases the amount of choice that a person not playing as Rick's group has until more notable villains are released. Their numbers can be further increased by adding Reggie and Craig (although they aren't associated in the comics), that I've already painted up.


In addition, I've painted another four Walkers. I'm going to try to paint as many Walkers as I paint Survivors to try to get through them and not get distracted by the more interesting characters. 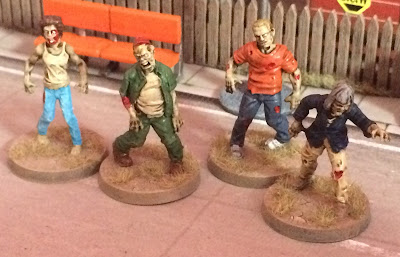 Finally, I've almost finished my Mars Attacks street furniture: two mailboxes, two sections of picket fence, a street sign and a bus stop bench. The streets sign still needs road names adding, which I'll probably do with the printer, and I still have a bin to finish off. Then I might move on to the ruined buildings.

That's it for now, but you can expect to see at least some of the Scavengers in a scenario soon.