The end of June's project heralds the beginning of July's project, and as a culmination of my Guildball project, JP came over to give my Morticians a thorough going over with his Butcher's Guild team. 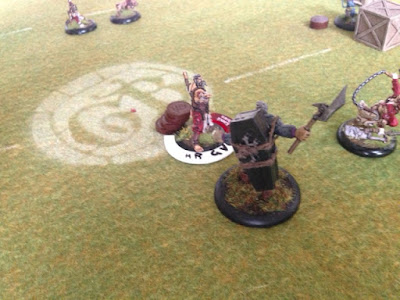 I'd like to point out before I begin, that JP was the winner of the world's first official Guildball tournament last months...with his Butchers. In fact, he apparently won the final in the manner of a steamroller. This wasn't going to be easy. However, it was going to be fun; I haven't played JP since our gaming club folded a couple of years ago, and we have a history of some brutal, and epic Bloodbowl matches (I seem to remember that our Skaven/Norse game broke the scoreboard).

The teams were as follows:

We deployed in fairly flat lines, and the game began with Ox kicking straight down the middle and following up. I used Casket to move up and use a range of his abilities to prevent Ox from moving, and then a combination of Silence and Obulos' Puppetmaster skill allowed me to move the ball out to the right towards where Dirge and Cosset were making headway up the field.

I felt that I'd made a good start and then I started to learn how the game really worked. In a flash of special rules, Shank leapt forwards, stole the ball, dodged through my defence and flash a shot straight towards my goal. Score 4-0 to the Butchers. Ouch!

The ball was kicked out and Dirge went to collect it and again move up the right as that was where I had players. I began trying to batted the Butchers in the area, but found Shank hard to lay my hands on and Gutter could heal herself fairly easily. Cosset, however, struggled to do the same and eventually fell in the battle of attrition. 6-0 to the Butchers!

In the middle, Casket was doing an excellent job of tying up the lethal Ox, and when Meathook joined the fray, Graves managed to get behind the pair and unleash a scything blow that hurt Ox, but put Meathook and the nearby Shank onto a dangerously low level of health. However, before I could capitalise on this, Graves also fell to some brutal combination attacks from the Butchers. 8-0. 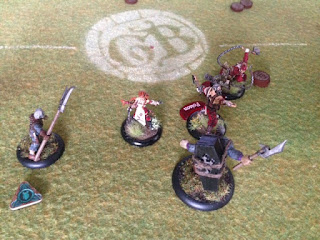 However, the build of damage I'd been inflicting across the Butchers finally paid dividends and with the writing on the wall in terms of the overall game, Obulos battered Gutter into submission and Dirge launched up field with the ball in a desperate rush to score. 8-2.

However, this was to be my final act as the job of holding up the main Butcher attack alone finally told on poor Casket and he fell before Ox's cleaver and then Boiler was launched towards the fragile Dirge and was more the capable of bringing down the the ball-bearing Bat. 12-2 to the Butchers.

Well, that was brutal.

To be honest, I wasn't at all surprised at the result and I feel that in some areas I did quite well. Casket was very good at keeping Ox occupied and to some extent out of the game. However, instead of attacking him, Casket's actual attacks should have been focused on a squishier player like Meathook, and he would have been helped in this if I'd given Graves more influence to get involved earlier.

Obulos is excellent and his Puppetmaster ability is really useful at controlling play, however, each time I got the ball, I didn't do enough with it and found myself drawn into a slugging match with the Butchers that I was destined to lose. I needed to get the ball moving sooner and be more aware of how easy it is to lose the ball. Cosset really struggled to make an impact, and she may find herself substituted out of a Union player like Mist in my next game.

I'm really enjoying Guildball and this game (my second, as I played another friend's Alchemists using his Fishermen a couple of weeks ago) has really whetted my appetite for more.

So with one project complete, a new one begins. Dave, one of the participants of the 6MMRPC has been working on some excellent Woodland Indians from the French & Indian War, and has inspired me to finally have a crack at the warband I've had kicking around for some years. 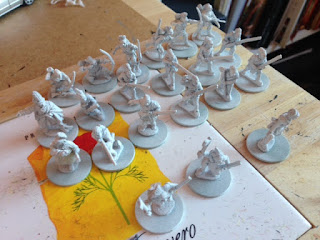 I originally bought these for Muskets & Tomahawks, but I never really played that, and then the got co-opted into my continuously false-starting War of 1812 project, and recently they've become a potential opponents for Mike's new Pirates project. And so, with numerous outlets for them, I've finally begun to paint them. 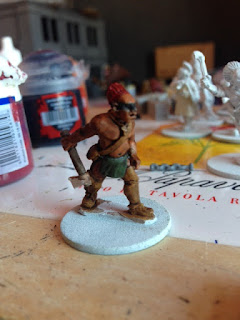 This picture is actually a rarity for me, as I don't normally like to post WIP photos, however, I've done this one to show the skin tone I've got for my Native Americans. I've done some digging on different paint recipes, but it didn't really work, and so I've settled on simply using Ratskin Flesh and a wash. I works for me. :)

So my goal for July is to complete the warband of 22 models and hopefully get some form of game in with them. No idea what rules I'll be using though...
Posted by Kieron at 13:05