We've just finished running through the narrative campaign in Imperial Assault, and I have to say that it's a brilliant game. The linked narrative nature of it takes me back to Heroquest.

Disappointingly, we, the Rebels, lost the final encounter. We'd previously bested the villainous General Weiss and prevented him even getting into his suped-up AT-ST before battering him down.

This time however, things were different. A door opened, Vader was there, he force choked Matt's Trooper; so far, so Vader. Mike's Smuggler had learned to shoot round corners (and apparently through walls - although we might have been cheating) and preceded to shoot the Dark Lord of the Sith from a position of complete safety.

Amazingly, rather than advancing into the face of the fight and dispatching Stormtroopers to deal with Mike, Wes made Vader run and hide in a corner. My Wookiee Meatshield had to run to catch up in order to smack him upside the head.

At the climax of the campaign, Darth  Vader cowered in a corner whilst we tried in vain to fight through his minions to fight the most dangerous model in the game. 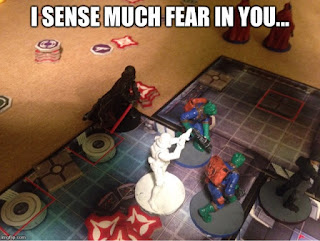 We took a vote and decided that although the Rebels had technically list the campaign, Wes had acted in a wholly un-Imperial manner and had therefore rendered the whole thing void. :)

It's called Imperial ASSAULT for a reason!

Nevertheless, Imperial Assault is a cracking game and well worth playing.
Posted by Kieron at 02:13