I finally managed to get my first games with my Resistance force for Dropzone Commander last week against Pete's United Colonies of Mankind (U.C.M.) army. In the first game we used just the contents of the starter boxes, and in the second we each added a couple of other units, and a commander to enable us to make use of the command cards. In both games we played the starter scenario in which we were going after three objectives and would gain 1VP for holding each of them at the end of the game, and 2VP for getting them off the table. 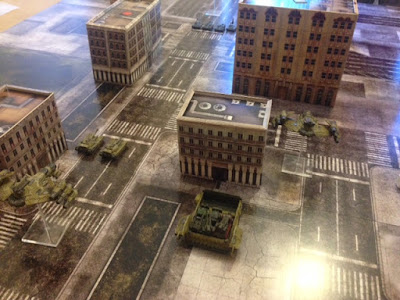 We called the game at that point, as Pete would not be able to stop me from scoring 2VPs with the objective in the Lifthawk and would struggle to get a draw as he had to race after my Jacksons with Sabres and find the third objective in two turns just to draw. We figured that getting a second game in would be a better idea.

For the second game we added the following units and upgrades to bring us up to 750 points.

I later found out that the Marine Recon Force was technically not allowed in my force at this level and with the current organisation, but it allowed us to play a bigger game. It also meant that I'd be using the Allied Resistance cards in my deck, rather than the Feral cards.

Pete's changes meant that I was less likely to be able to move my dropships as much as I had in the previous games, and the Kodiak would put me off clustering my forces. However, the addition of a fast moving infantry unit meant that I had much more flexibility in trying to grab objectives.

I didn't take photos in the second game as we had limited time, but the highlights were as follows:


So with two wins under my belt, I'd had a jolly good time. To be fair to Pete, the nature of the starter scenario seemed to favour the Resistance more than the U.C.M. due to my infantry's greater tactical flexibility and the awesome AA support that the Gun Wagons on the Kraken provide. In both games I was losing the battle of attrition badly, and I'd suggest that if Pete had managed to even up the VP scores, he would have won on kill points.

Based on my first impressions, Dropzone Commander is an excellent game, packed with tactical decision making and tough choices, and both games were very close. I'm now planning my next purchases, which should see the arrival of the hulking M3 Alexander command tank and another Lifthawk to get the slow moving behemoth into position.

I'd definitely recommend this game. Loads of fun.
Posted by Kieron at 06:02