The Man Who Laughs

I finally managed to get another game of Batman in last week against Pete, who'd recently finished his Watchmen crew. I decided to use my Joker gang against him for a couple of reasons: I've not actually used a full Joker crew for quite some time; I'm planning to take a Joker crew to my next tournament and I wanted to start experimenting; I was keen to try out Victor Zsasz after reading an article on the Crits Kill People blog; and after a recent game of Bolt Action Pete had been his usual magnanimous self and made no fuss at all about my amazing ability to roll ones in sequence - so I decided not to be nice. :)

We rolled up the Ambush scenario (which incidentally I've never played) and so Pete was inevitably going to be caught in my trap. I split up my force into two halves - Joker, Zsasz, Ringmaster & Sniggering on one side, Harley and the Clown swarm on the other. 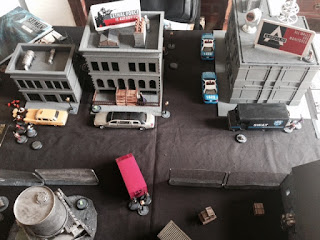 Pete sensibly decided to move to attack Harley Quinn's side of my force in an attempt to prevent me from, using my numbers against him. Ozymandias and Silk Spectre solved riddles, Rorsharch bat-clawed up high, Silk Spectre advanced in cover, and Comedian took a shot at one of the Clowns, but missed. Nite Owl, dropped down behind the Clowns, but was prevented from shooting at them by Harley's Disarray.

With my forces split, I decided to act quickly to close the gap and help out Harley's force. Shield Clown threw up a Flare, enabling Sniggering to target a Distracted (and easier to hit) Comedian, taking him out of the game. Joker used his Exploding Teeth to damage Rorsharch, whilst Zsasz used his massive move potential to cross half the board and Ringmaster picked up some Loot. Harley and her Clowns advanced into the teeth of the Watchmen, Contra-Auguste moved in to attack Nite Owl but failed to do damage in what was to become a battle of ineptitude.

It occurred to us that due to Hardened, Comedian shouldn't have become a casualty in the previous turn, so he reappeared but knocked out and was quickly dispatched by Knife Clown.

The Watchmen sprang their counter-ambush, but it didn't quite hit home as Pete hoped. Rorsharch swung down at Harley, but she blocked his attacks. Ozymandias joined the assault on her and knocked her down, but not out. Silk Spectre did manage knock out Knife Clown, but Nite Owl only managed to exchange handbag slaps with Contra-Auguste.


Joker sauntered up the road and in an ostentatious display of domestic violence, managed to blow up his own girlfriend in order to catch Ozymandias and Rorsharch, who was knocked down and then knocked out by another (slightly less effective) salvo from Sniggering. Zsasz sprinted up to assault Ozymandias, but failed to make his blows count against his formidable defence. Other clowns ran off to secure objectives in the following turns.

The third turn began with, frustratingly for Pete, Rorsharch failing his Endurance roll. This left him as easy meat for Zsasz and Tube Clown to finish off. Harley jumped up and ran away from Ozymandias, who proved extremely vulnerable to bad dice as he failed to have any significant impact on Zsasz, apart from activating his Tension rule, making Zsasz more dangerous.


Joker switched to his One Shot Gun, but Silk Spectre dodged the bullet and was able to leap away to continue an assault on Harley Quinn. Sniggering swung down from his vantage point to hunt targets and Sheild Clown made it to the Ammo objective. Meanwhile, Nite Owl and Contra-Auguste...well...failed to impress...

With the numbers starting to turn against the Watchmen, Ozymandias found himself swamped by Joken, Zsasz and Tube Clown. Thanks to being a Martial Artist, he managed to stay on his feet, but was badly mauled. Silk Spectre managed to strike a blow back by knocking out Harley Quinn, but this wasn't enough to offset Ringmaster dropping his Loot to grab a Titan Container.

With the Joker crew taking the lead, Zsasz was finally able to unleash his full attack potential against Ozymandias, knocking him out and leaving him at the mercy of Tube Clown to finish off with a coup de gras. In an attempt to liven up the fight with Nite Owl, Contra-Auguste backed off in order to draw him towards the other Clowns, however, this succeeded only in allowing Nite Owl to thrown shurikens and back off towards a Titan Container.


Seeing this, Joker moved around to deal with Nite Owl himself, whilst the rest of the Clowns engaged with Silk Spectre.

Joker advanced on Nite Owl and managed to finish the hero off with his poisoned blade. With Silk Spectre surrounded and the Clowns sitting on objectives, we decided to call it a day as there was no way back for Pete's crew.

That went south for Pete quickly. One of the things about this game is that there's a lot to know about and when you're new to it, you can easily overlook details that will matter later on. Such was the case with Flare; I don't think he realised how much danger Comedian was in when he moved him on the first turn. This took one fifth of Pete's crew out and meant that he really couldn't respond effectively to my numbers and freed up Clowns to head off for objectives.

I was also able to concentrate my attacks and pretty much drop one Watchman per turn. The isolated Watchmen were unable to respond, although Silk Spectre made a good fist of it. Pete wasn't helped by Ozymandias and Nite Owl continually fluffing their attacks - something they are vulnerable to without Handy.

Pete may have done better if he'd launched into my weaker Clowns early on to even up numbers, prevent objective sitting and add to his VP tally. It also seems that Nite Owl needs a more specific role - either drawing the enemy to him by waiting on a valuable objective, or assaulting Sniggering (who was in a prime position to be pushed off a building).

Nevertheless, this was a fun game and it's only a matter of time before Pete gets to grips with the Watchmen. Although for now, I'll only mention this score a couple of times...