A World That Hates And Fears Them 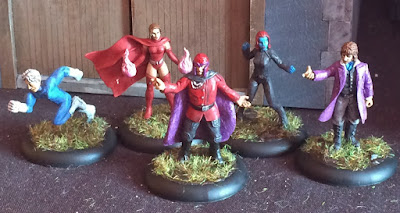 With all these heroes popping up, they need someone to fight. So with the X-Men finished, it seemed only fitting that the Brotherhood of (Evil) Mutants should be next in line. I've gone with almost the classic original line up of Magneto, his twin children: Quicksilver and the Scarlet Witch, Mastermind and instead of Toad, Mystique, who has been a fixture in the Brotherhood in the movies. 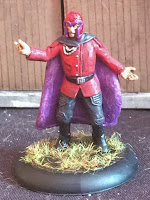 Magneto, the Master of Magnetism! In terms of the colours, I went for something like the outfit Michael Fassbender wears at the end of X-Men:First Class. It's not the classic outfit but there's no way I could make that much purple and red work on a model without something else to balance it. 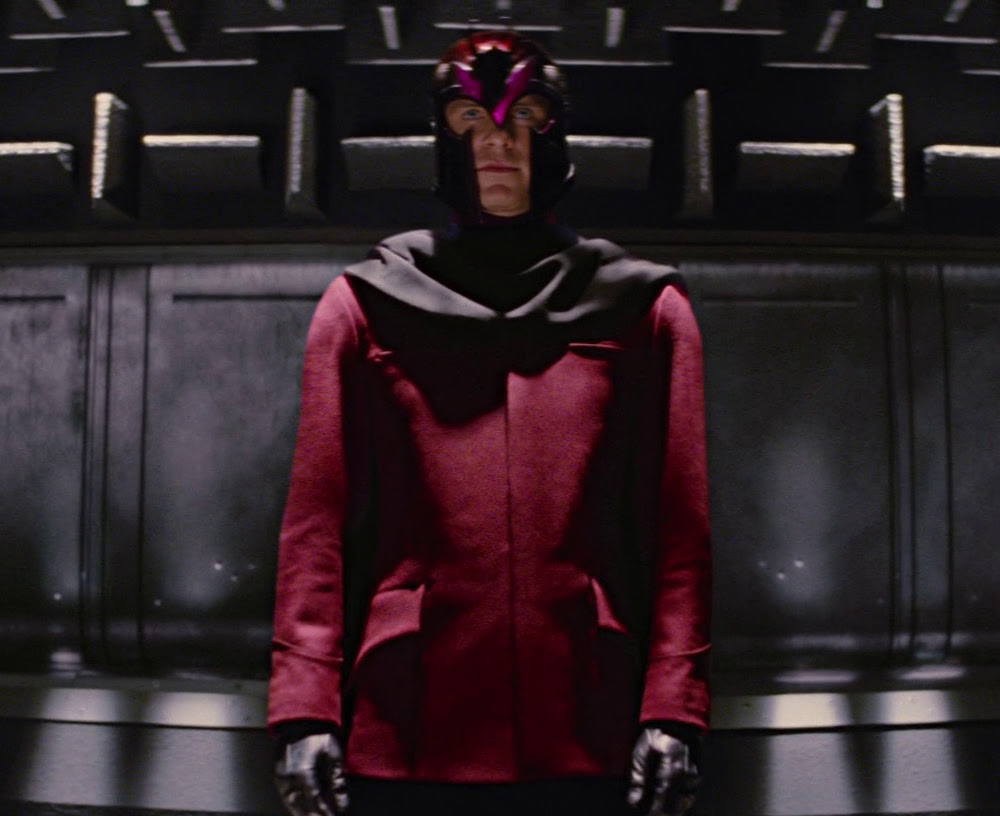 This model from Nexus Miniatures and bears a striking resemblance to the leader of the Brotherhood. Despite liking the miniature, I've a small gripe in that the head seems a little small. I also need to pluck up the courage to give him eyes, as the gap is too big to get away with just shading. At least if I muck it up I've got another one as there was a small delay in shipping so Nexus sent me another model and some spare heads, so I might even try out a different scheme or a version without his helmet.

Mystique, the shape-changing mutant is more like the comics version than the movies in that she's wearing clothes! This is a Crooked Dice sculpt and was extremely simple to paint. There's not much else to say, I really like her, however, she does offer options as in addition to working for the Brotherhood, she has, in several incarnations been part of a X-Team or two. 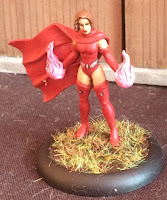 Scarlet Witch, impractically dressed and ready for action. Although simple, I'm really happy with the job I've done on her, especially the magic effects which came out surprisingly well.

This model is from Crossover Miniatures and demonstrates more of that flat and immobile sculpting that I commented on in my previous post. It's a shame, as the details of this model make her almost perfect for the Scarlet Witch of the comics. If you prefer something a little more like the version from the recent movies, Hasslefree Miniatures have an appropriate sculpt in their resin range that might suit your tastes. 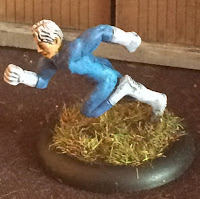 Quicksilver, Scarlet Witch's twin brother, is also from Crossover Miniatures. Although this sculpt is a little more dynamic, I did have to do a little head surgery, as the one he's supplied with was twice as big as the heads of the rest of the group. The sheer volume of spare heads you get with Crossover Miniautes (and my recent order from Nexus) meant that finding a suitable alternative was no problem.

I've gone for a simple colour schemes, opting for his blue rather than green costume as I didn't want confusion between him and the model I've painted up as Speed from the Young Avengers. I've also not bothered with his trademark lightning bolts as a) they'd be a pain to paint given his pose, b) you wouldn't really see the ones on his front, and c) they're my models so I don't have to please anybody else but myself.

Both Quicksilver and the Scarlet Witch are also potentially additions to my Avengers team, so I have plenty of options now.

Finally, a character many will be unfamiliar with: Jason Wyngarde, the Mastermind, in his guise as a member of the Hellfire Club. Fun fact: the character's appearance was based on Peter Wyngarde's character Jason King (hence the name), and the Hellfire Club itself was based on an episode of the Avengers, the British version starring Patrick Macnee and Diana Rigg. I bet you never knew that!

I only have a few models left to do in what I'd previously bought for this project, but I now have fully useable teams for the Avengers, the X-Men, the Brotherhood of Mutants and HYDRA. I now need to sort out some rules and get some games played.
Posted by Kieron at 03:17