Models were painted, scenery was placed, it was time for battle to be joined. Matt and I would be marshalling the proud blue bellies of the Union in our attempt to win Missouri to our cause against those vile, traitorous, secessionists of the Confederacy, Pete and Wes.

The battle we would be fighting was the Battle of Wilson's Creek, 1861, the first major engagement in the western theatre of the American Civil War. Brigadier Nathaniel Lyon had chased Sterling Price's Missouri State Guard to the southwestern corner of the state, where the Missouri rebels had been joined by Benjamin McCulloch's troops from Arkansas. Despite being outnumbered, the aggressive Lyon saw his opportunity to drive all significant Confederate forces out of the state.


Despite the scenario giving us the option to have one brigade attack the enemy in the rear, Matt and I opted to concentrate our outnumbered forces, and hope that Pete and Wes were worried enough about the rear attack to deploy troops to deal with the threat, preventing them (initially, at least) from overwhelming us. I was commanding the 1st and 2nd Brigades, which we placed on the flanks to be held back  in case of sweeping flanking movements (one of which we knew would come from the cavalry which were off table). Matt's 3rd and 4th Brigades were massed in the centre, although this was a bit too cramped to bring them all into play, and things got a bit confused over the first couple of turns.

Worryingly, for me at least, Wes and Pete decided to mass on the flanks too. Pete was controlling the 1st, 2nd and 4th Brigades, as well as the Cavalry, and had placed his two better brigades (more resilient and armed with rifled muskets) facing my 2nd Brigade, and we all knew that the Confederate Cavalry would be showing up on that flank at some point too. Meeanwhile, Wes had placed his massive 3rd Brigade on the opposite flank. Only the 4th Brigade was in the centre, whilst the under-strength 5th Brigade was held in reserve as defence against a rear attack.

To an extent, our plan had worked. At least one brigade had been held back, and the rest we scattered and had to negotiate the stream before they could get to us. What's more, we not only out-ranged the Confederates, but we also had better artillery to greet them as they attacked. Until either the cavalry showed up, or the 5th Brigade was able to get into line, the numbers were also pretty much even.

It was time to put our theory to the test. 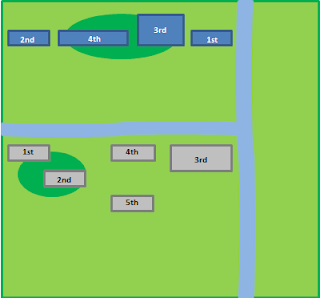 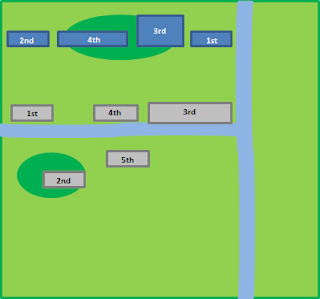 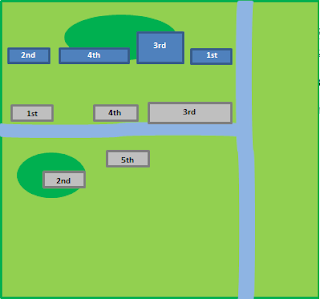 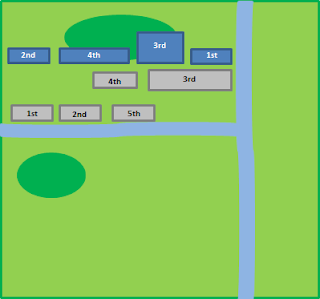 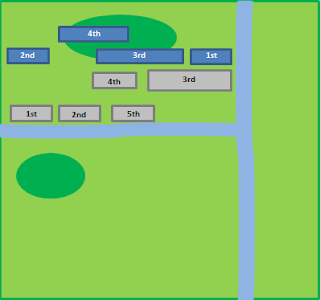 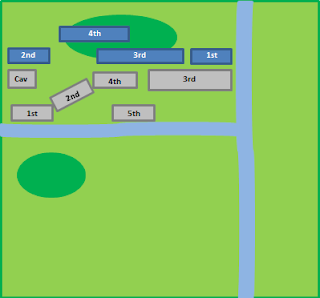 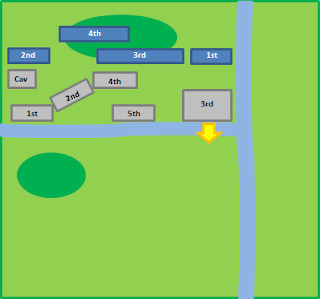 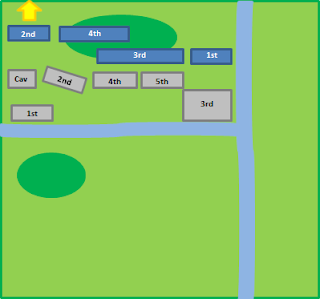 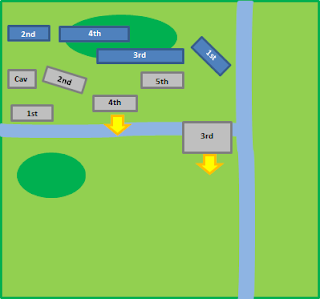 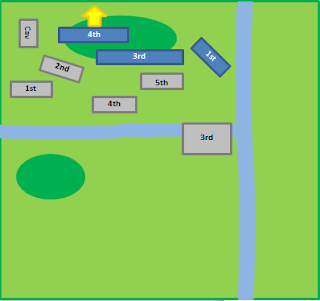 We were within a whisker of breaking the Confederate 5th Brigade as both armies raced to envelop each other's flanks. If we'd held for another turn, we might have done enough to drive off the enemy. Black Powder is a funny game in that both sides experienced shooting failing to have the expected impact, whilst battered regiments just wouldn't break.

Personally, I think I did the right thing putting my toughest regiments on the flanks of my brigades and both were instrumental in my little brigades holding for as long as they did. Matt and I definitely benefited from Wes and Pete having trouble getting their artillery into action quickly, and we were able to disorder their lines consistently with our own artillery. We probably didn't make as good use of the hill as we could have, and we probably should have worked harder to bring more of our units into the battle earlier. We were also a bit too cautious, and I should have tried to charge to drive off the cavalry, as shooting had not effect on the dismounted skirmishers.

Wes and Pete were very aggressive, as befitted having the advantage of numbers, but putting the 3rd Brigade at point blank range from my artillery, enabled me to do damage quickly to counteract their numbers advantage. Massing on the flanks ultimately won them the game, and was a sound strategy.

Overall, I think we did well, and came closer to beating the Confederates than our historical counterparts. At some point, it might be nice to play a game where we have the same size force as Pete and Wes, although that shouldn't be a problem as we move through the Civil War - number were usually the Confederacy's problem.

Next week, Pete and Matt are going one on one with each other in the scenario from the main rulebook, Daybreak at Hangman's Creek. I'm going as 'umpire', mainly to iron out the rules mistakes we made in this game. We're also working towards the Bartlett's Farm scenario, which requires me to paint another four stands of infantry.
Posted by Kieron at 12:41