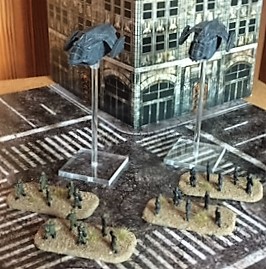 These special ops units are only available to Allied Resistance armies, as they are the forward scouts of the UCM reconquest forces. They are better trained and better equipped than any of the UCM infantry (a point that I'm sure is irritating to Pete) and arrive on the battlefield in suped-up Raven-A light dropships.

These elite troops will provide my army with fast units who can retrieve objectives, search for intel or dish out some pain with equal measure, freeing up my Resistance Fighters to work together more and use their numbers to their advantage.

The Raven-A light dropships are currently the only light dropships available to my force. They were painted simply: spray grey, pick out silver and black details, wash black and drybrush to highlight. I now realise how Pete is able to get so much DZC stuff painted so quickly; UCM are a doddle to do.

These dropships have also given me a chance to test the colour scheme for another painting job I have coming up, but this is bigger, with wheels (minus the one it lost on the M6 motorway).

The infantry aren't official MFR models, but are plastic UCM Legionnaires I was given by Pete. They aren't the best models around (I can see why Pete didn't want to do more - besides the fact that Legionnaire suck), reminding me a little of the inhabitants of Trumpton, but free always enhances quality in my eyes.

In  fact, these are the closest I'm going to get to proxies in DZC as Hawk Wargames genuinely manufacture the cheapest 10mm sci-fi going, it's just not work proxying. 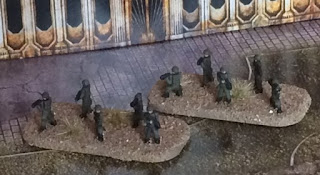 The second unit have been done in green for a number of reasons. Firstly, it allows me to distinguish between the units. Secondly, as I'll usually use only one of these pricey units, the others become available as additional UCM troops that can be gained through one of the Resistance command cards. Finally, painting them different colours prevents me from beginning to think that I have the beginnings of a UCM army and starting to build one. 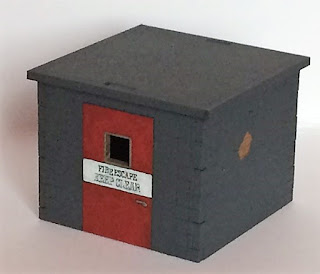 In addition to all this I've painted a fire escape that can with the air-con unit I painted yesterday. It's TT Combat, and again very simple and functional. I've run out of textured spray paint and so the roof still needs doing, however, it's perfectly usable. The only issue I have now, is that I don't really have a building tall enough to justify a fire escape on the roof.
Posted by Kieron at 07:20