...and what I do isn't very expensive!

Getting back in the painting groove with the fifth member of my Avengers team for the Marvel Universe Miniatures Game: Wolverine! 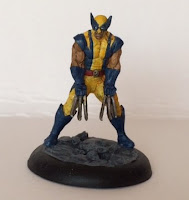 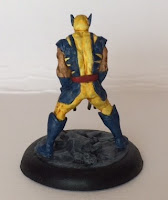 Familiar to everyone and their sister, Wolverine, a.k.a. Logan, is the pint-sized, adamantium-clawed, regenerating mutant that features in all of the X-Men series of movies, even though his ageing process doesn't tally with any of the timings of the movie.

I've done him in has famous yellow spandex outfit, and I was really pleased with how I'd done, until I took these pictures and they revealed how rough the yellow is, and how much I've stuffed up in different places. Having said that, I won't be changing him, as he looks fine to the naked eye (or at least my naked eye).

This brings my Avengers up to 38 points, which annoyingly means that I can't fit them all in when I get round to repainting my Hulk, who adds a further 17 points. To be able to use all of the models I've painted, I'll have to get a few more models to offer alternate team builds.

An air-con unit from TT Combat. Easy to put together and easy to paint. 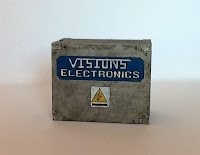 A skip from Fenris Games. I've left this one empty, but I'll be doing something a bit more interestin when I do the other one in order to cover up a little bit of miscasting. 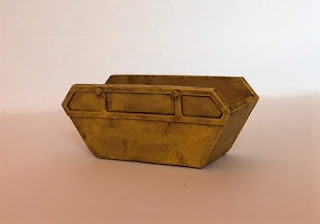 Some jersey barriers from Reaper Bones. I bought these to try out the Bones range as I normally really like Reaper Miniatures, but found them somewhat lacking in detail and a bit warped. I won't be investing heavily in more Bones figures, but at £2.50 for two, I'm not complaining. They'll do.

All of the above provide simple items for my heroes to chuck at people in the Marvel game. They'll also provide more cover in BMG and 7TV.