Given that I'd recently got hold of a shiny copy of the 'Flash and The Arrow' expansion book full of new (if questionably worded) rules, I decided that I would take one of the new teams to the tournament to try them out.

A quick inspection of my model collection revealed that the team I would most likely be able to field with minimal painting was the Birds of Prey, and the line up was as follows: 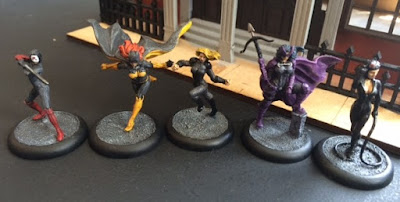 Short on numbers and lacking in big hitters, but fast and agile. I was not sure that this team was going to be effective in certain scenarios, but it would certainly be a different experience.

Regular readers will notice that there are a couple of new models in the line up which needed to be painted ready for the tournament. 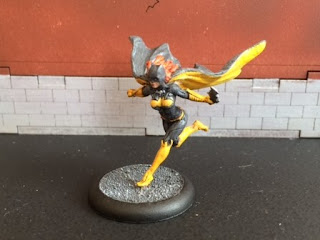 Batgirl a.k.a. Barbara Gordon. I needed her in the crew as she's currently (along with another version of her) the only character who has a small enough reputation to allow me to get five models into the crew. She also brings a degree of vertical mobility (through the use of her bat-claw) which the crew was missing.

I'm going to go on record and say that this model is without a doubt the most godawful sculpt I've come across in my three years of buying and painting BMG minis. Both legs come separate from each other and the torso and the join point on the midriff is just a mangled mess; there's a gouge missing out of her back. The cape which hides this is also separate and really heavy, so much so that I've had to weight the base to stop her falling over.

Given my frustrations with assembly, I'm actually not that disappointed by how she's turned out, but she's not a model I'd recommend to anybody. 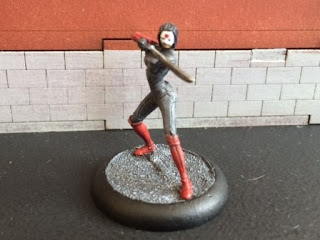 Katana is a character you might not be familiar with. Indeed, I wasn't until recently coming across her in 'Beware the Batman' and Season 3 of 'Arrow'. What's more, she's also going to feature in the 'Suicide Squad' movie that's being released this summer.

I hadn't originally intended to buy her, I was going to use Poison Ivy, but I picked her up second hand from the same person I bought Batgirl from. She was simple to paint, and ultimately I was glad I had her in the tournament. 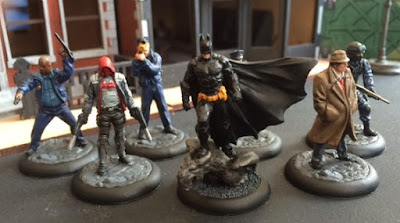 The moment I saw Dan's crew, I knew I was in trouble. His set up was very similar to my Batman crew and it does Plunder very well. I knew what to expect; the cops would sit on his objectives, and Batman and Red Hood would come hunting for my Birds of Prey. Conversely, the nature of Plunder meant that my crew would probably be isolated and easy prey (excuse the pun). I would have to score every turn and do something to interrupt Dan's ability to score.

In brief, the game went like this:
In retrospect, I made several mistakes and Dan made none. I lost Black Canary cheaply and this put me on the back foot from the get go. I also attacked a group of henchmen with Huntress rather than Katana; had I been more aggressive with Katana, she would probably have cut through the cops and prevented Dan scoring from the Titan. At the very least I could have made the scores closer.

This would be more like it. Patrol suits the faster crews, and Bane's mooks aren't too manoeuvrable. I was also helped by a building blocking off half of Simon's deployment zone, so there was a chance of scoring unopposed for a while from Catwoman's loot if I could get it to her. I would have to be careful as Bane, Venom Soldier and Smash could make a mess of the Birds of Prey, if they could get hold of them. What's more, I'd need to be conscious of the ever present threat posed by Dallas and his night vision enhanced assault rifle.

The game in brief:


This game was close. Although I  allowed Catwoman and Canary to be cornered and lost them (again), they were able to pull Bane and Venom Soldier away from the big points in the game, and Ravager and the other henchmen were unable to deal with, or get hold of, the other Birds, which allowed Batgirl freedom to score at the end, and Katana freedom to chop them to bits. 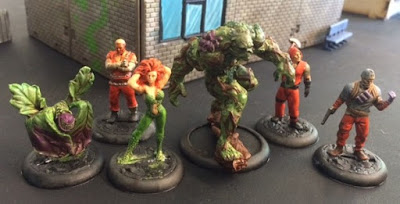 With a win and a loss behind me, this game would be tricky. Although, with the exception of Swamp Thing, my crew was faster and stronger than Jane's. The hypnotize ability of both Ivy and Borj were bad news for my Willpower 6 crew; I would have to steer clear of them both if possible. Ideally, I could also avoid Swamp Thing and use hit and run tactics to hit the prisoners.

As it happened:
This was a very cagey game, with Ivy controlling the centre of the board, whilst the Birds of Prey skirted the edges. For much of the game the only difference in the points tallies per turn was the bonus point Catwoman was getting from the Loot. The last turn, specifically Huntress breaking free of Ivy's control, made a difference to the scores.

So with two wins and a draw I wound up third...again. This time there was only a small field, but I pretty much matched my performance from last time. Three good games and a fun day was had all round. First place was taken by Kris with a frightening Cyborg/Starfire crew. No prizes yet, as the prize pack hadn't been received in time, however I can look forward to a package arriving at some point.

Looking forward to the next one.

As for the Birds of Prey, they're hard work. They lack the numbers, hitting power and durability to go toe to toe with most crews. They have to rely on hit and run tactics, taking down easy marks and grabbing objectives quickly. They also struggle with objective camping, as they are all crucial to the overall effectiveness of the crew. Once one of the Birds sits on an objective, a fifth of my total crew is unable to support the rest. Whereas in most crews, there a 20 rep henchmen available for the same task. Because of this, I can't see the Birds of Prey racking up big wins and each game will be touch and go, with a slip costing them big.

The Birds of Prey are fun and fast, but they are a scalpel as opposed to a sledgehammer.
Posted by Kieron at 16:56