As it's Boxing Day, officially the laziest day of the year, I've got a little time to post something I did last week:

I've revamped my old Necromunda Gang, which have sat unused for at least a decade. I didn't do anything complicated, just a simple rebase (using the growing mound of Knight Models knobbly bases I've amassed), throw a wash over them and change the colour of their gang colours. Overall, I'm happy with how they've turned out with a minimal amount of work. 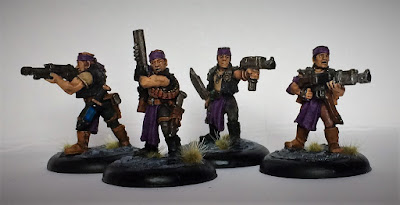 The gang used to have green bandannas and loincloths, but the colour change has been prompted by, of all things, my Teenage Mutant Ninja Turtles for 7TV. I do have some plans for villains such as Baxter Stockman, Bebop and Rocksteady, the Krang and, of course, the Shredder, but in the short term, I wanted to put together some suitable opponents for them. 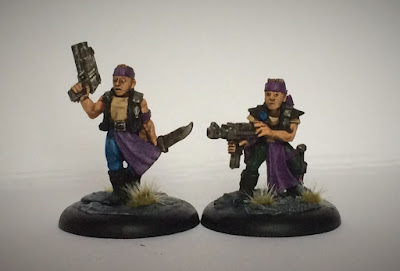 Therefore, in the spirit of saving money, my Orlocks have been transformed into a heavily armed version of the Purple Dragons, a street gang which the Turtles (in almost all of their incarnations) tangle with very early in their crime-fighting careers - which seems appropriate.

I'm not sure I'm going to use all of the heavy weapons in a TMNT game, but certainly the flamethrower might make an appearance. I'm planning to use the Minion profiles for the gang and have them led by either Baxter Stockman, or Chris Bradford (using the Bolo profile from the SHIVA PDF).

I might, of course, also use them for Necromunda...