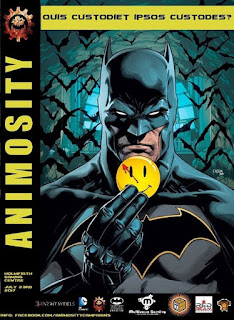 Yesterday I was able to attend another Animosity Batman Miniature Game event at Holmfirth Gaming Centre. Again it was a themed campaign day rather than a straight tournament, and unsually there weren't as many people as at previous events (presumably due to the school holidays starting and folks being away).

The theme for the day was based around a story-line that appears in the Batman: Rebirth comics in which there is some sort of crossover between the DC universe and that of the Watchmen. Broadly, the Watchmen have appeared in Gotham and are searching for Dr Manhattan to take them home, and Batman was investigating their activities. Meanwhile, the League of Shadows was also trying to secure the power of Dr Manhattan, but also track down Harley Quinn, who had stolen a truckload of merchandise related to their plot in an attempt to use Dr Manhattan to bring the Joker back from whatever plane of hell he was banished to during the last event.

Into all this enters my Wonderland Gang... 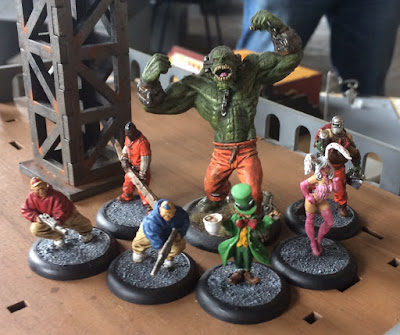 Jervis Tetch, aka the Mad Hatter, was not bothered about securing cosmic power, he has his own agenda and obsessions to address, namely broadening his collection of hats and finding Alice.

My crew was as follows:

My broad plan in most scenarios was to use Killer Croc, White Rabbit and Little Spark would use their speed (or the sewers) to get across the board to objectives whilst Hatter and the Tweedles (who are significantly slower) would use their formidable firepower to hold off and pin down the enemy. The Prisoner would do whatever seemed best at the time. 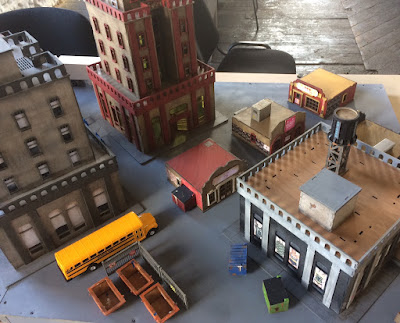 Harley Quinn had taken her truckload of goods stolen from the League of Shadows to her hideout in China Town. However, the Mad Hatter had become convinced that Alice was in Harley's hideout, and the single goal of the game (after all my planning) was for the Mad Hatter to get to the doorway of the red building. Harley Quinn had to stop him. There was also the small issue of an added scenario rule involving a biker gang, who may, or may not be involved. 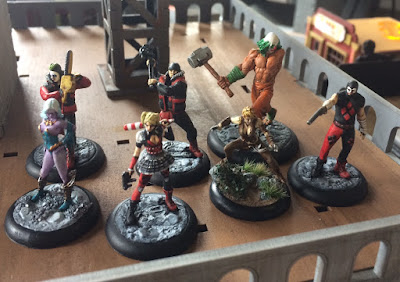 
Things went badly for Rob on turn four, when Croc popped up and ate the Thug with the shotgun, Mr Hammer was beaten up by some bikers, Killer Frost was mind controlled into stopping Copperhead from attacking leaving both in the line of fire from the Tweedles. At the end of the game, Rob just didn't have enough people available to prevent Hatter reaching his goal, despite cunning use of the Goad trait on the previous turn, and ultimately, White Rabbit kicked Punker away from Hatter to win the game.

Unfortunately, 'Alice' turned out to be the truck driver, called Dave, who had long blond hair. Things never go right for Jervis Tetch.

Final Score: 15-1 to the Wonderland Gang.

After driving Harley Quinn out of China Town the Mad Hatter spots a familiar silhouette outlined on the rooftops. The Bat was here, clearly responding to the disturbance. Even though he hadn't found Alice, he could at least add a new hat to his collection. Thus began: 'The Battle For The Cowl'. 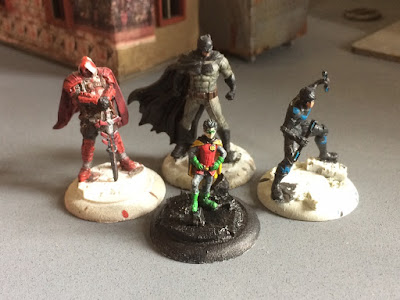 With corner deployments and facing such a fast and aggressive (but small) crew, I put my initial plan into action. Little Spark and White Rabbit set of at a run, but both had to change direction faced with fast approaching vigilantes, White Rabbit turned back and Little Spark took a longer route. Croc popped up and drew Azrael back to him to prevent him scoring, however, Croc got the better of their confrontation and Azrael sought out an easier target in Little Spark.

Meanwhile, Hatter and the Tweedles, with the help of White Rabbit, were on defensive duty, managing fire enough shots to take down Nightwing (but not before he'd clobbered Tweedledee), and Hatter mind controlled Robin into helping and then going away. Batman managed to turn on the bat-signal but couldn't turn round the result.

The final result was 21-6, but I owe Matthew an apology as I used the Fake Objective strategy on the Bat-Signal, but shouldn't have done as you can't affect it with strategies, and so he should have had a couple of extra victory points. As a special mission reward, I was given a Batman mask to wear.

Game 3 - Tonight Ends With Gotham's Fall vs the Watchmen (Chris) 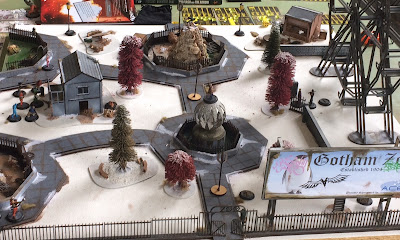 In his continuing search, Jervis Tetch spots a PVC clad woman investigating a glowing blue apparition in Gotham Zoo and thinks it might be Alice. His gang captures the Silk Spectre and the unresponsive form of Dr Manhattan, but the Watchmen were about to bear down on them. 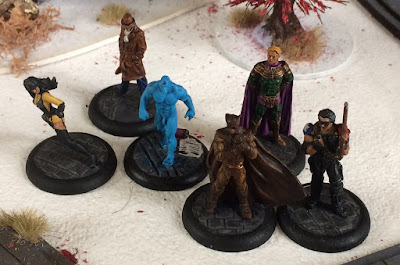 Dr Manhattan is an objective marker Chris made using a miniature from Hasslefree Miniatures, and in this game would be used as a bat-signal.

The scenario didn't help Chris as he began without Silk Spectre, and this was compounded when Tweedledee and Hatter managed to kill Rorschach quickly. However, Night Owl released Silk Spectre and Ozymandias got across the board ridiculously quickly and the Watchmen began kicking the hell out of Hatter and the Tweedles.

However, the Watchmen didn't have enough bodies to cover all angles and so Killer Croc was unopposed sat on the Titan objective for five turns and White Rabbit grabbed some loot and headed for the Ammo. Comedian did his best to deny White Rabbit some points, but couldn't get to grips with the slippery bunny girl.

The final score was 29-19 to me, with 10 of those points coming from Croc, who was rapidly becoming my MVP for not doing much.

Game 3 - Streetfight vs the League of Shadows (Darren) 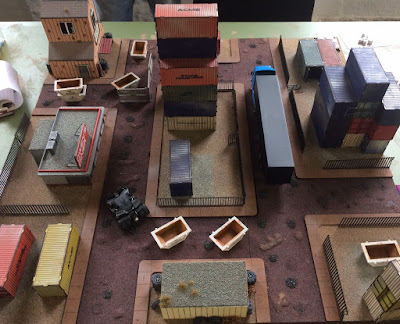 I'm not sure what the premise of this final game was, but basically, I was suddenly in a shipping yard facing ninjas. Fittingly, however, this was a game between the only two players who hadn't lost a game so far. Darren had won two and drawn one.

This game was a very cagey affair. I obviously didn't want to get too close to the Ninjas' katanas (when Little Spark did so, he was killed quickly), and Darren made good use of stealth and cover to stay clear of my firepower. Seeker and Nyssa failed to inflict much damage with their arrows, and ultimately it was left to Shiva and one of the League Agents to make it to their objectives. However, White Rabbit killed the Agent and Mad Hatter took control of Shiva's mind, sending her off in the wrong direction.

Ultimately, the game was decided by Killer Croc once again climbing out of a sewer onto an objective, and he was joined soon after by the Prisoner, who jumped onto the Titan. The final score was 25-7 to the Wonderland Gang.

If you've been paying attention, you'll have realised that I managed to win all four games fairly comfortably, and this meant that I ultimately won the event (which as well as the campaign, had a loose tournament structure). I realise that I had a degree of scenario help, but I felt that I used combination of strong defence (in the form of three powerful guns and mind control), and the ability to get across the board quickly really well. Killer Croc especially works well with the Wonderland Gang as with the Wierd Crew strategy, even if somebody does devote the effort to killing him, it will only get them 2 victory points as he counts as a henchman, and trying to contest the objective he is on simply gives him someone to kill.

My result netted me an armful of prizes, including a Lexcorp crew box, Professor Zoom and some other assorted goodies...I got to keep the mask.


Another really good day, which turned out to be surprisingly successful.
Posted by Kieron at 03:17