After poor light last week, a sudden spurt of good weather has meant the I was battling with it being a bit too bright to photograph this week's offering. I got there in the end, but many pictures were taken in a variety of locations. 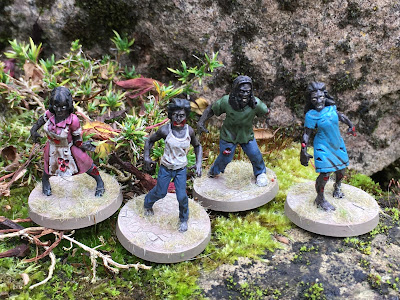 The observant amongst you will have noticed that all of the zombies I've painted are African-American, and this has been a deliberate choice for my week's painting for several reasons:
Interestingly, the lack of equal representation amongst the zombies is something that's been commented on about 'The Walking Dead' TV show. There's some interesting discussion about this issue which raises ideas such as unconscious bias in the casting process, acting (and therefore extra work as zombies) not being viewed as a viable career choice by the black community leading to more white extras being available, and even 'scientific' arguments suggesting that as bodies decompose, the skin would lose pigment leading to more zombies looking white.

Whatever the cause, I prefer a 'freshly dead' look to my zombies, and so, to cut a long story short ("Too late!" they cried.) I felt that there was a need for me to paint some African-American zombies. 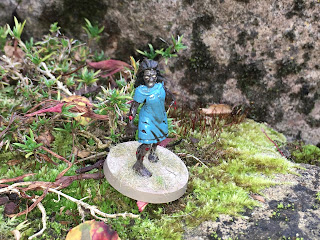 This lady came in the Morgan booster and even though all the sculpts in the game are based on images from the comic series, Mantic have cunningly boxed Morgan and Duane with a walker who bears more than a passing resemblance to Morgan's wife in the TV show - she doesn't appear in the comics. 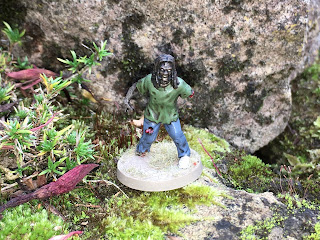 You may notice the use of a flash during daylight in this image. This is because that the bright day was causing me issues with picking out the details on the darker colours I used. You can't quite see, but he's dragging his mangled foot behind him. 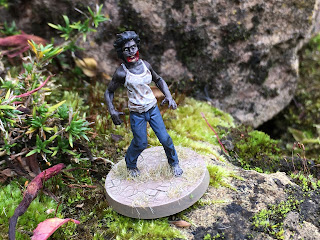 This model, I actually have two of, and the first has already been painted. It's one of two zombies that Mantic were giving out at Salute in April, and my diversity project this week seemed a good way to avoid obvious repetition in my shambling horde. 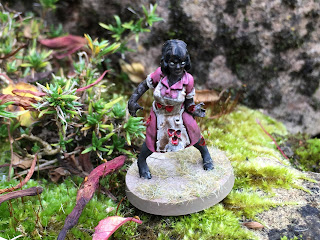 I really liked painting this model. There's something almost cliche about the zombified waitress lurching out of the kitchen in an abandoned diner. I've actually already done a waitress in the same uniform when I painted my Wargames Factory zombies - I like to think that they both worked in the same diner chain, just in different locations (due to basing and sculpt size/style I'm not going to use my Mantic and WF zombies in the same games).

So that's this week done.

Next week you can look forward to Rick. Yes, I know I've already done him, but this time...he's on a horse!
Posted by Kieron at 07:16