Zomtober: Give That Man A Hand 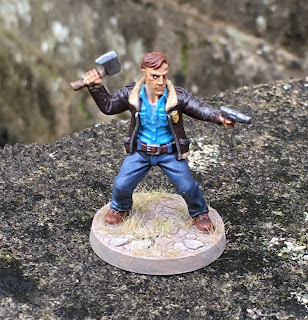 I've had a slightly enforced break from blogging due to being, well, busy. However, Zomtober is here and it's given me a bit of a kick up the backside to get painting again. Starting with my backlog of models for The Walking Dead from Mantic Games.

Rick, pre-amputation, is one of the models in the main game box and, obviously, features in most of the scenarios from the Days Gone Bye expansion, so it's quite important to get him done.

In all honesty, he was mainly painted back in May when I lost my mojo for the Walking Dead, and so he was an ideal candidate for getting finished for the first weekend in Zomtober. I've tried to make sure that his police jacket matches the one I did for Shane, so the can actually serve as partners, should I choose.

If you're wondering what the hell Zomtober is, it a little joint project a number of bloggers take part in each year where you commit to painting at least one zombie or survivor per week dueing October, with the deadlines being the weekend. If you're interested in joining in head over to Brummies Wargaming Blog to sign up.

I've already got Morgan and his son Duane in the pipeline for next week, with some Walkers shambling up behind them. My overall goal this month is simply to make a dent in my backlog, and I'll hopefully find time to do some solo games as further motivation.