As promised, this week's offering for Zomtober is Rick, on a horse, from Mantic's Walking Dead game booster called, 'Rick on a Horse', which features a model of Rick on the aforementioned horse, and a zombie, one of the aforementioned walking dead. It's an example of extremely clear labelling from Mantic, something that other companies could possibly learn from. 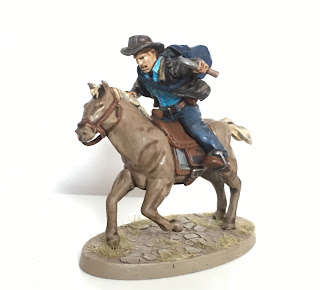 My antipathy towards painting horses has caused many a wargaming project to falter in the past:


And so you can understand why I approached this week's offering with some trepidation. 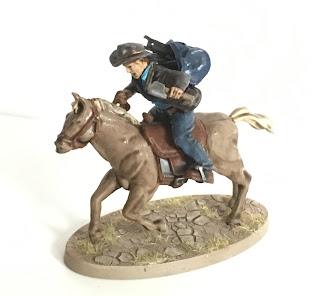 And I have to say, I'm still not happy with the horse. I think I need to go back and maybe put a bit more effort into highlighting it. However, I always reach this stage, where the horse is passable and any attempt to improve it, might actually make it worse and cause me to have to spend even more time painting something I dislike painting. Have I mentioned that I hate painting horses?

Also, looking at the pictures, I've not only noticed that I've forgotten to do the eyes properly, but there's an ugly mould line above the left eye that I'd not seen. 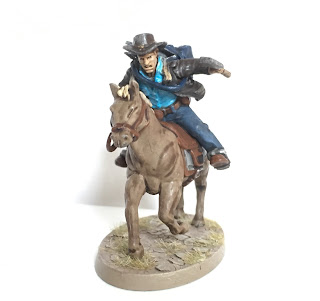 What I don't hate, is Rick. Another cracking and characterful sculpt which I've painted to match the version on foot that I finished at the beginning of the month. I'm very happy with how he's turned out. So much so, that he probably does a good enough job of drawing my eyes away from the hated horse to make my not worry too much about it, especially as this isn't a model I can see myself using all that much. The horse only features in one of the solo scenarios, and in regular games I'm not sure how useful the horse would be, as despite making a character much faster, it also causes lots of noise and so will constantly be moving zombies towards it. 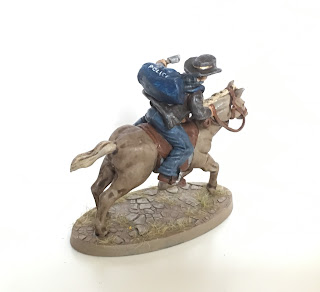 As well as hating horses, I also hate free-handing writing on models, it never goes well. Therefore I love it when models have raised text sculpted onto them, as it helps me out immensely. The lettering on the police bag is an excellent example, and adds a nice detail to what would simply be blank if it were left to my 'skill'.

And so there we have it it for another week. This coming week is half-term for me, and so I have plenty of time to work on what will hopefully be a decent finale for this year's Zomtober. I also hope to find time for a few solo scenarios now that I have the necessary models, and so there might even be a return of my comic strip game reports if you're lucky. See you then.

By the way, I am fully aware, that if they are reading this, my usual gaming group will now be plotting to get me some horses should they draw my name in our annual Secret Santa. Yes, they are bastards. However, so am I, and I am also plotting along similar lines. Mwahahaaaaaaa....
Posted by Kieron at 08:14