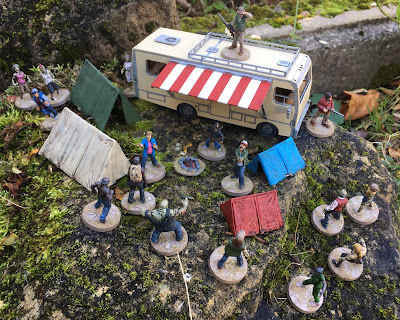 Back in April, at Salute, I'd bought all of the first wave of Mantic's Walking Dead game (along with Glenn, who's technichally Wave 2, but, you know, it's Glenn!) with the intention of painting them before I started buying more stuff. As detailed earlier in the month, I came to a bit of a grinding halt, and so for this Zomtober I wanted to make a dent in my backlog of Walking Dead miniatures.

Suffice to say, I have succeeded in my goal. The end of Zomtober conveniently coincided with half-term, and due to Sheffield and Derbyshire refusing to admit that they are next door to each other, I've been on holiday whilst my daughter hasn't. Therefore I've been able to power through almost all of my remaining miniatures for The Walking Dead. 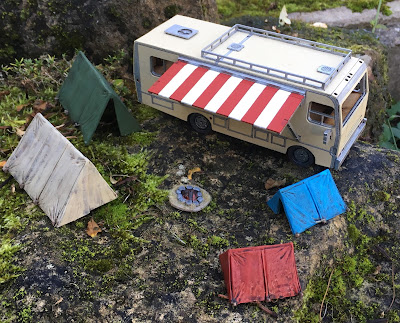 First up, the Atlanta camp. The tents and campfire are from Renedra and cheap as chips. They're not my finest work, but they don't have to be. The larger tents have been painted cream and green to all ow them to also be used as terrain in pulp games and Bolt Action respectively. The smaller ones were done brightly to make the camp seem suitably modern. Ideally, there should have been some different shaped tents in there, and there are several available (Crooked Dice, for example, do a dome tent), but for essentially two scenarios, I'm not going to worry too much.

Dale's RV is an MDF model from Mantic. I'm still not entirely convinced about MDF vehicles, as they are a bit flat and never quite match with the diecast cars I usually use as terrain. However, it's affordable (definitely a factor if you look at the costs of getting an diecast American style RV in the UK), fun to build (this one was infinitely better than the infamous SWAT van from Knight Models) and look fine in scenarios without loads of other vehicles - which is true of Dale's RV. 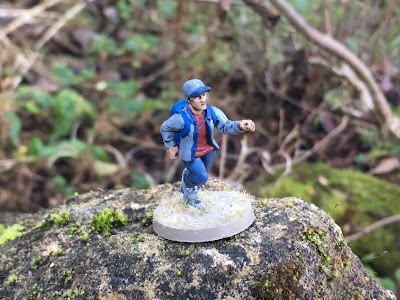 Glenn is a recognisable character from the TV show and is one of the characters who is most faithful to the comics. I like this pose as is suits his role in the game and the story in the early stages as a nimble and resourceful supply runner. Hist feet, however, are massive...which might explain why Maggie falls for him... 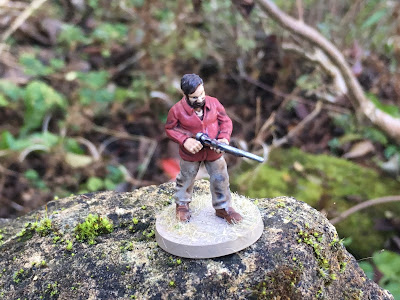 Allen is a character who doesn't really appear in the TV show in any recognisable form, although certain elements from his story-line (losing a leg in the prison, the twins) do pop up. This is a very simple sculpt, with an equally simple paint scheme. 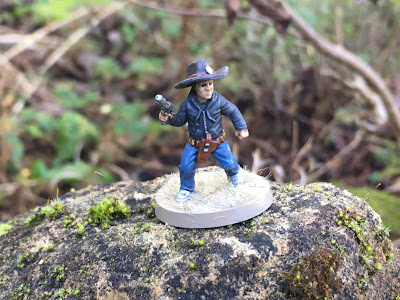 Carl, or "CORAL!", Grimes. This is a cool little model from the starter set. I went with a black for his hoodie, rather than the more standard red, as I'd already given Duane a red hoodie and I did't want them to look like they're using the same shops. Although given that they're both from Cynthiana, that's not beyond the realms of possibility.

There are lots of nice details on the model which made it fun to paint. My only gripe (a small one), iis the fact that his hat, which is meant to be Rick's, is a different style to the hat on the Rick on a Horse model. I suppose this is more to do with models being taken from comic images, and so the mistake is more likely to be due to the artists (of different artists) than Mantic. 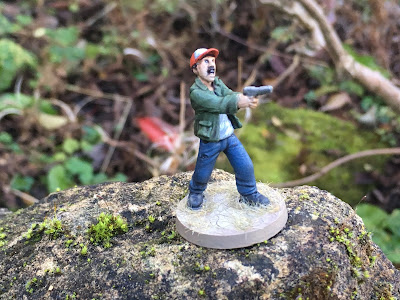 Jim is a character who is briefly in both the TV show and the comic books. He gets bitten before the group leaves Atlanta and in the TV show gets left tied to a tree to allow him to kill himself in his own time.

The colours I went for were inspired by the character Kenny from the Telltale game series. I still have the Lee and Clementine set which is based on the same game and Kenny is a significant character. Interestingly he not only looks a bit like Jim, but Jim's repair ability is a decent match to Kenny as well. My only slight issue that he's ended up looking a bit like Ted Glen from Postman Pat. 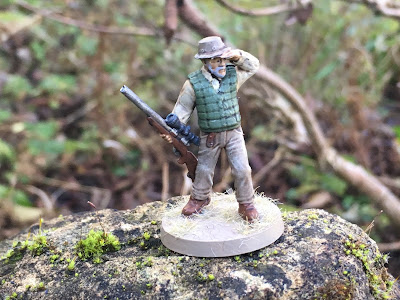 Dale, the unsurprising owner of Dale's RV, was another simple model to paint. Fortunately the comic Dale is more sedately dressed than the TV show version, who favours Hawaiian shirts. He comes armed with a scoped rifle (the equipment cards for which are also provided) which provides the opportunity to take out walkers from a safe distance. 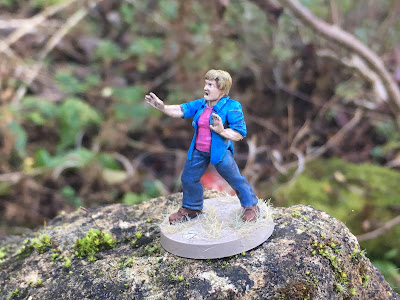 Donna is Allen's wife, and as you can probably guess from her pose, things don't end well for her in the comics. Amusingly, in the game she's a low cost and low nerve character who almost seems designed to die as Allen gets a boost if she does. 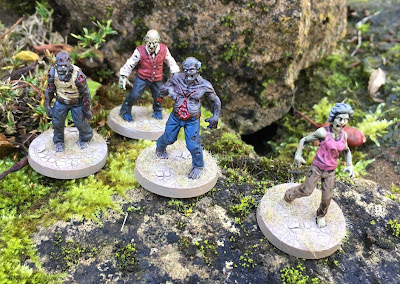 Naturally there were more walkers to do. These four have been done as the inhabitants of an old people's home (it's also the third time I've painted the model on the left, as I keep getting it as a freebie at shows). It strikes me that in the early days of an outbreak there should probably be a higher proportion of old zombies appearing due to the inability of the grey vote to get away quickly, along with the proportions of people in hospitals, which are likely to be the source of any outbreak. 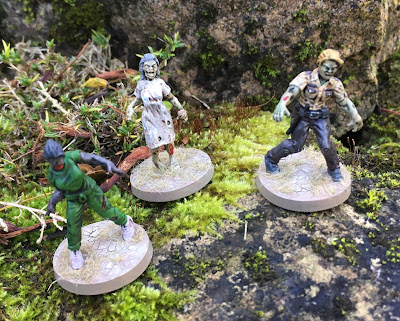 I like the individuality of the Mantic zombies and each one tells a little story. Here are two first responders and a patient. The cop has clearly been bitten on the arm whilst dealing with what appeared at first to be intoxicated vagrants. The patient received a bite on the hand (which is now bandaged) and was treated in hospital before succumbing to the virus. The doctor appears to have been bitten around the mouth. Perhaps she was giving CPR to the patient?

Interestingly, the doctor is possibly the zombie with the least detailed face in the range. One of the nice features of painting zombies are that any sculpting or casting issues are easily covered up as wounds. 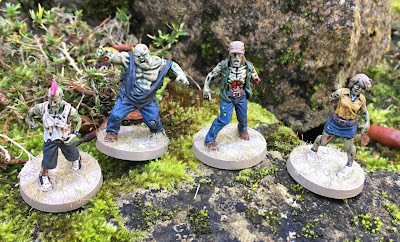 Finally, a slice of Americana. A punk with the strongest hair gel in the world. A plus-size walker who fell foul of rule #1 for suviving Zombieland: cardio. A hillbilly rocking what I can only assume is a mullet, making me want to call him Billy-Ray. Which means that the girl must be Miley. They both seem to be missing an arm which perhaps means they have had an encounter with a survivor wielding a machete, or even a katana?

So that's all of Wave 1 finished. The only Walking Dead models I have left to paint are Lee, Clementine and a Zombie from the show-only booster, Lacey Greene (she came with Glenn and will wait until I'm doing the rest of the Greene family), and a Hasselfree Michonne that I've bought to make use of the free game card that came with Tabletop Gaming Magazine.

I swore I wouldn't buy any more Walking Dead models until I'd finished Wave 1, and so I'm free to spend again...and guess who's going to Leeds Fiasco this weekend.

I've also started playing through the Days Gone Bye scenarios, so you can expect my comic battle reports to start popping up over the next few weeks. I hope you enjoy them.

That concludes my Zomtober for 2017, and it's probably been my most successful for a while. Well done to all my fellow Zombtoberists who've been producing their own legions of the undead. We must do this again sometime...
Posted by Kieron at 09:45