After a couple of false start over the last couple of days, I finally managed to give Super Mission Force a try, after having it recommended to me. 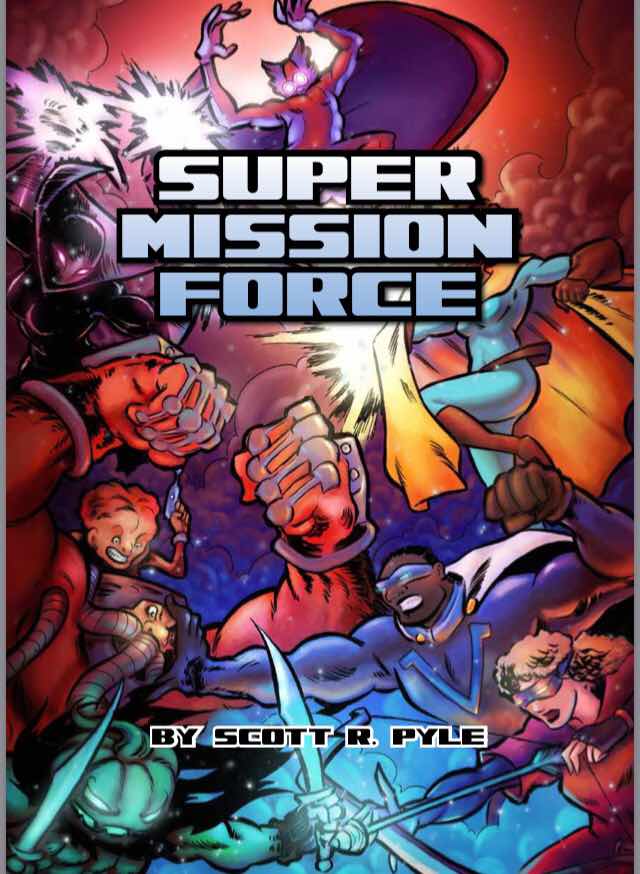 The game apparently began life as a stripped down version of Supersystem, which long time readers may remember I’d rejected a long time ago due to the fact that although it delivered a good game, was too detailed for my casual needs. As such I was wary when I found out that SMF, although sold as a simple game, had a whopping 248 pages!

However, it turns out that those are 248 small pages, with big writing, lots of space and a healthy number of images, and so it’s a much quicker read than you’d imagine. Also, a good chunk of the rules is taken up with abilities that you don’t need to know unless your characters have them.

The game is built around ‘goal rolls’, which are dice pools where you get one success for each 4+ you roll (a 6 counts double) and you’re trying to beat either your opponent’s total or a specific Target Number. Therefore the mechanics are definitely simple.

Character creation is also straightforward, as the game gives you archetypes such a as Blaster, Brick or Mentallist, working on the basis that there’s really not that much difference between characters like the Thing or Colossus. However, there is a bit of customisation available. There’s also the Wildcard archetype which has more choice to allow you to build more unusual characters.

I threw together cards for two teams of characters to test out character creation, and found the rules really easy to use. In fact I spent more time on formatting the cards than on actually building the characters. However, this was helped massively by resources available at the Super Mission Force Roster Repository.

The Brotherhood of Mutants

I set up a small table for this first game, however I did feel that this gave the X-Men a bit of an advantage, as they were a more combat oriented team, whereas the Brotherhood were perhaps a bit more esoteric in their power sets.

Let’s see how they got on. 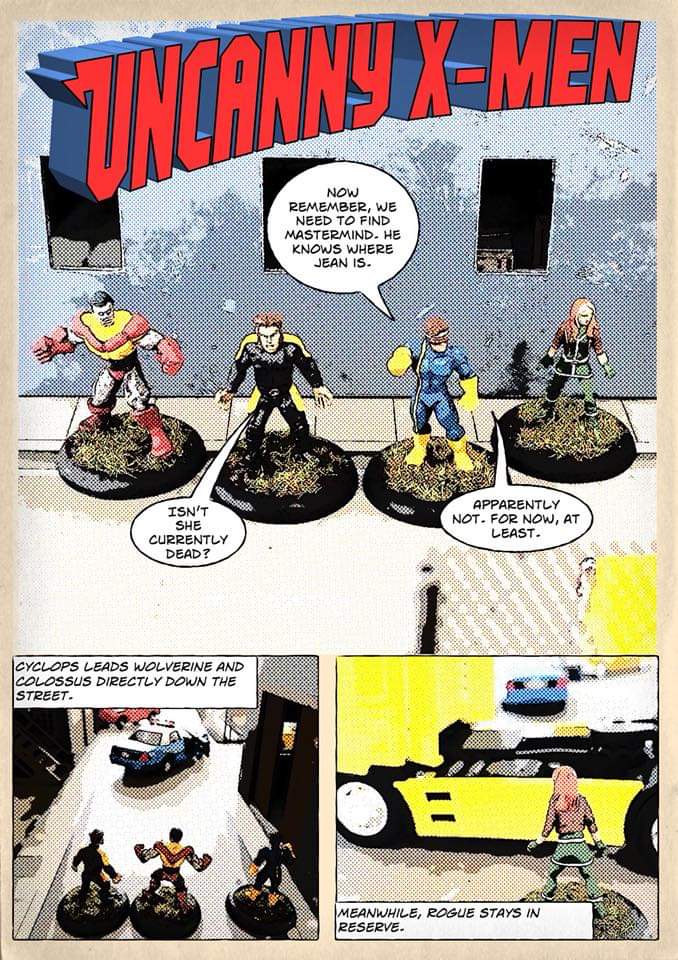 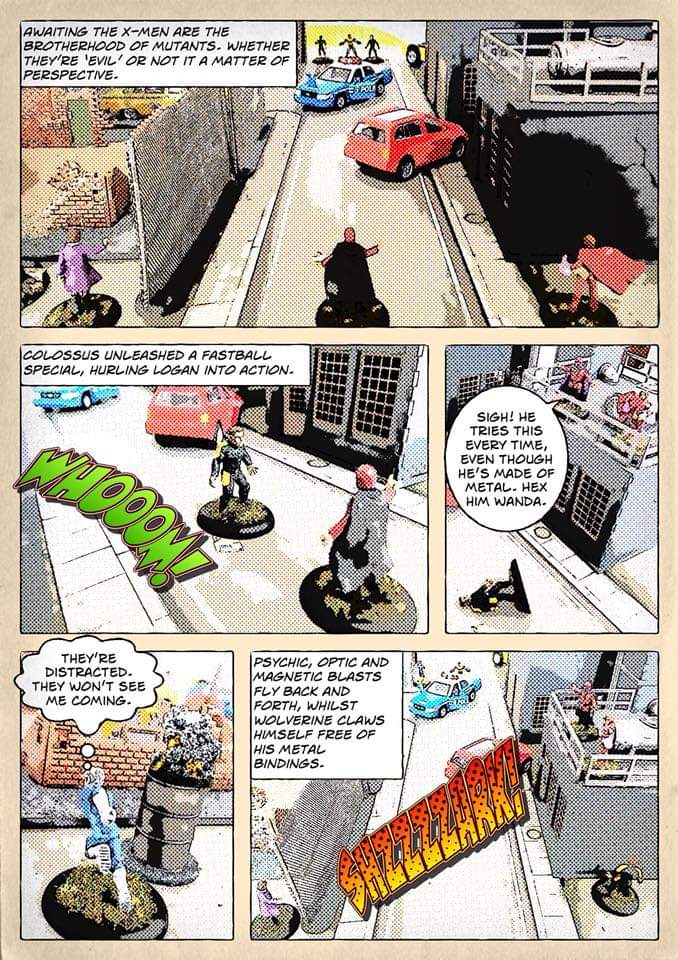 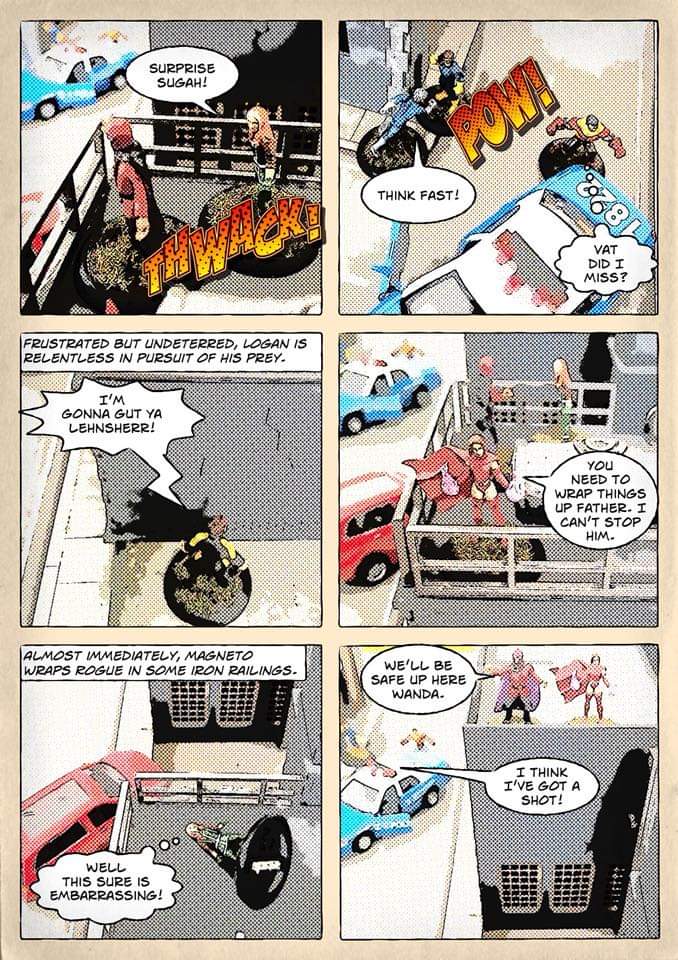 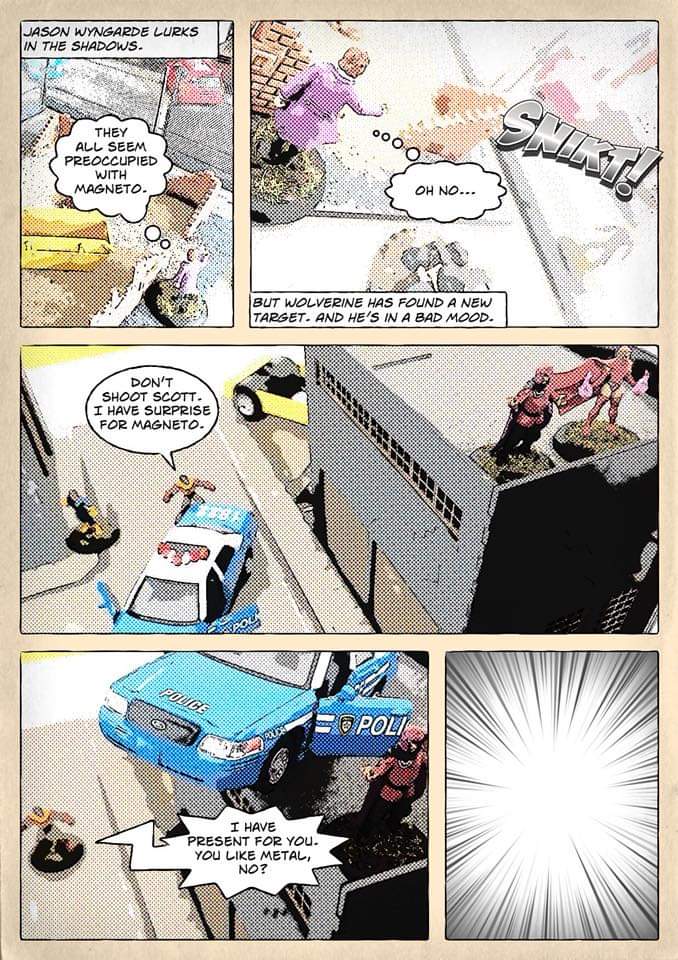 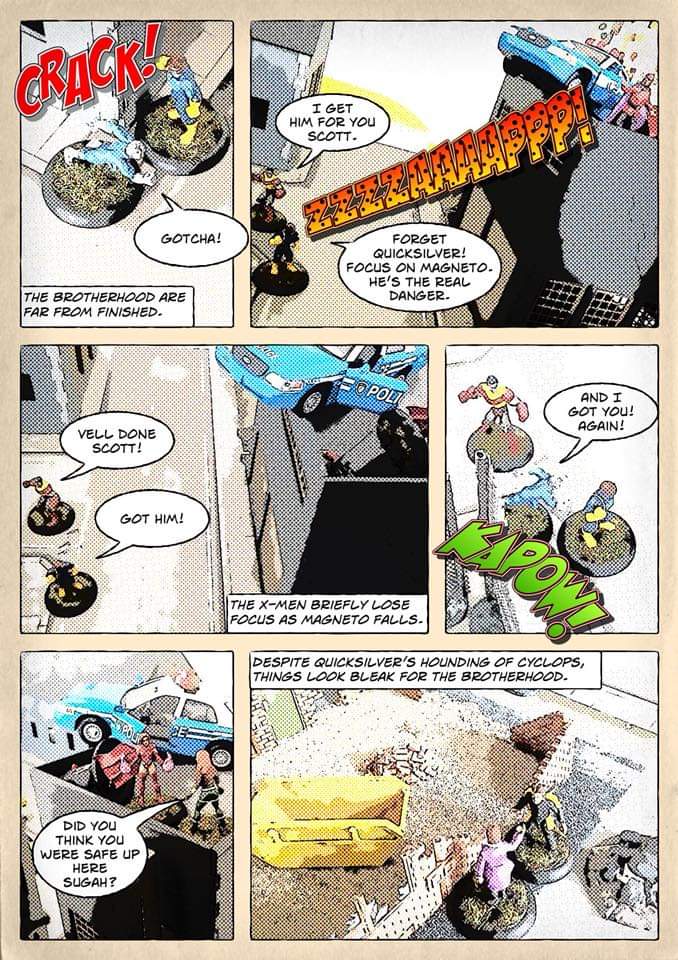 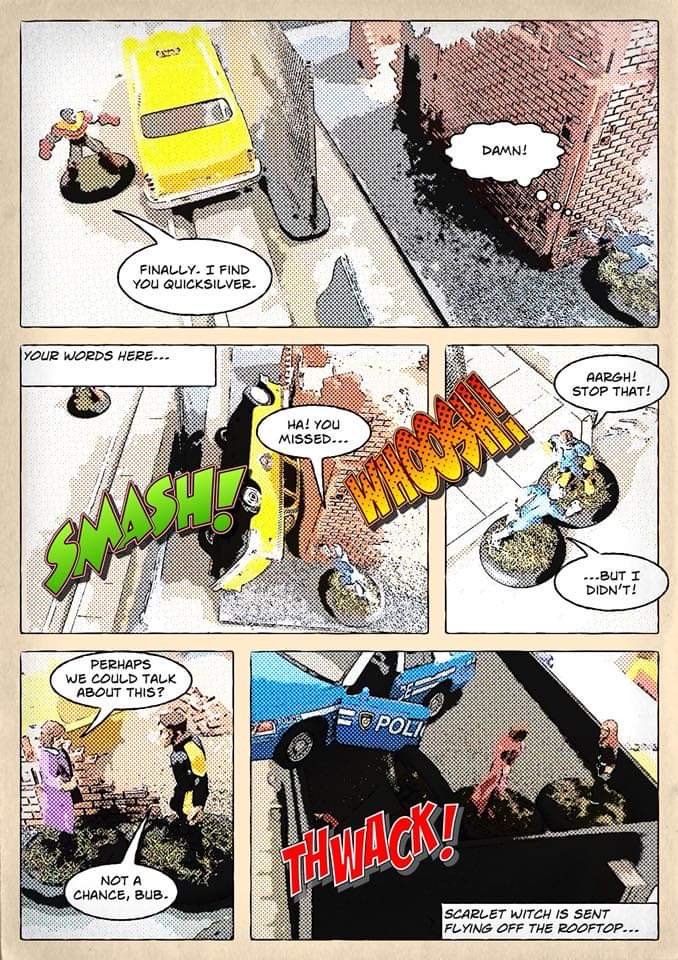 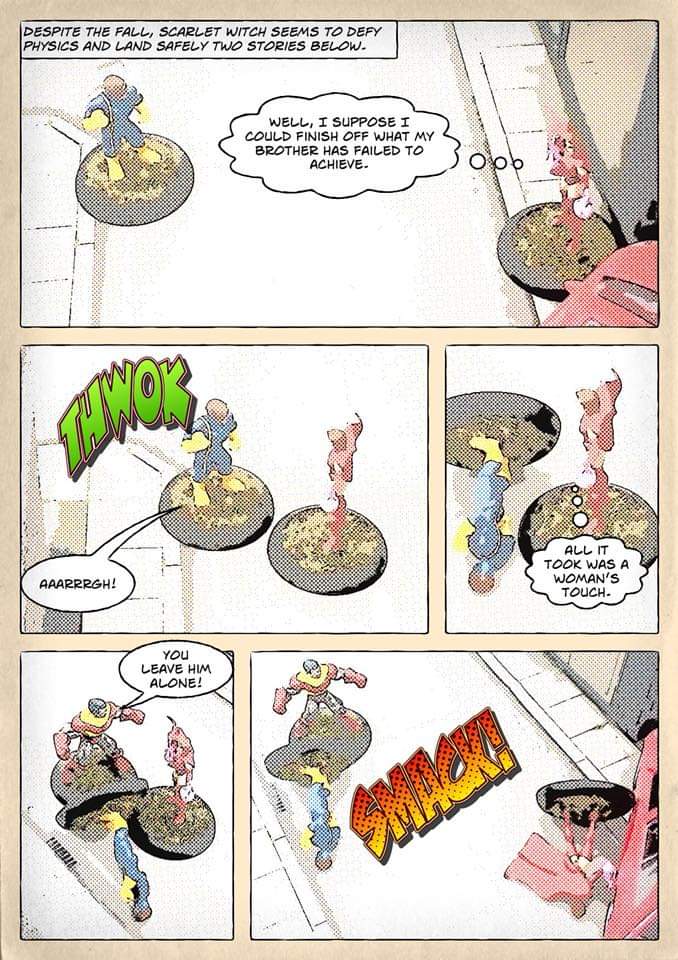 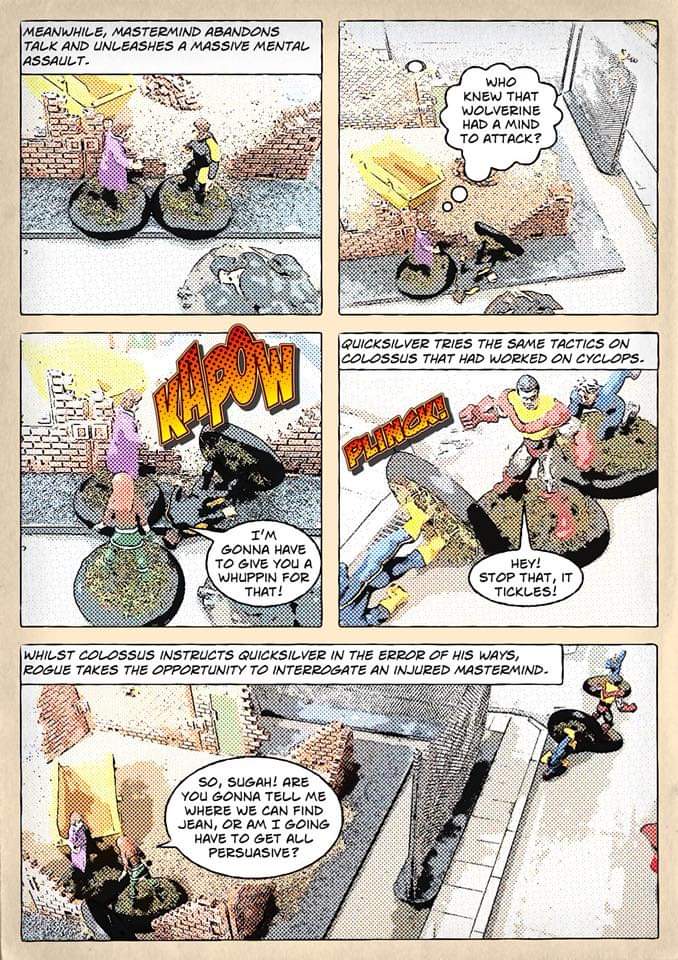 After all that, it was a draw. However, both Quicksilver and Mastermind were on their last couple of body points, and barring Nastermind unleashing another massive mental blast like the one that took down Wolverine (8 goalson six dice!), neither of them really had a chance of dropping Colossus quickly.

Overall, I really like the game. It is quick to set up and play and even in my first game, there wasn’t too much rule checking. The characters felt different from each other (and in character) in how they should play, and despite my initial misgivings, the game was more balanced that I thought, even on a small board.

What’s more, I felt able to do things that aren’t in the rules to give a more cinematic game, for example, actually moving the scenery around when Colossus throws things, which is fun. Also, there’s a campaign system to explore...

...I think that my Marvel project may finall have found a home...
Posted by Kieron at 00:40