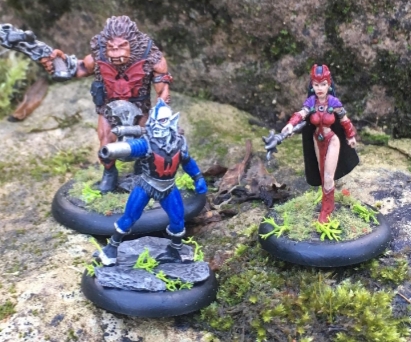 Okay, the term ‘horde’ might be a slight exaggeration, given that there are only three of them, but the Evil Horde are the, accurately labelled, bad guys in the She-Ra stories, and they are what the Great Rebellion are rebelling against.
My first additions to the Evil Horde are a good chunk of its leadership. Force Captain Catra, the savage beast Grizzlor and none other than Hordak himself.
Hordak is one of the many custom sculpts that have popped into existence since the Quest range appeared last year, and it scales with that range well...some would say perfectly.
It’s a really characterful mini and I’m really happy with how he’s turned out, especially the face (although the picture above doesn’t really show this off). I also like that he has the transformed arm blaster, and I look forward to using 7TV gadgets to reflect Hordak’s convenient ability to turn parts (or all) of his body into whatever plot device was necessary.
Catra carries a personal grudge against her former comrade Adora (spoiler: it’s She-Ra!) and has the ability to transform into a large purple panther by pulling her enchanted mask down over her eyes. I’m not sure how I’m going to represent this ability in game yet, and it might require another model to be painted.
This model is Empress Xenovia from Hydra Miniatures Retro Raygun range (the same range that Glimmer came from). This is clearly a more adult interpretation of Catra as despite appearing to wear a longer skirt, it’s actually somewhat more revealing and she’s clearly wearing no pants...how Evil is that?
The headdress and costume are similar enough to Catra’s to work with the right paint job, but I’m currently not sure about her weapon. I’m either going to conver the rod to look more like a Horde stun baton (which she often wielded in the cartoon) or replace it with either a sword or a whip which were Catra’s weapons of choice in print and in toy form. I’ll leave it as is until I decide.
As a side note, the rendition of Catra in Netflix new She-Ra series (which is actually rather good) is very different but really interesting, and the dynamic between her and Adora is really well developed. I would probably break my personal embargo on buying duplicate versions of characters if a modern Catra appeared.
Grizzlor was a minor character in the cartoons who barely ever spoke and was never really fleshed out. He was also the same size as the other characters and frankly looked a bit daft (but not as daft as the toy, which was fluffy!).
This chunky custom sculpt is a real improvement on the character and adds a really imposing model to the Horde. In game he will be a large (and so tough) extra, who will also serve as a unit leader for the Horde Troopers, when I get some.
So that’s another week of He-Month done and it’s time to leave Etheria (as I’m currently out of models) and head back to Eternia. I think we’ll fly there...
That might be a clue as to what’s next.
Although still unhealthy, I’ve at least begun the process of rectifying my painting scores:
Painted: 12
Acquired: 56
Posted by Kieron at 08:33