In a bid to get myself motivated to paint, I’ve decided to make February another He-Month. Basically this means I aim to get at least one Masters of the Universe miniature painted for each week of February. I do have a bit of a He-Man backlog, and so it will be good to get some/all of them finished.
This week (well, today actually) I’ve managed to get three models painted to add to my burgeoning Great Rebellion from the She-Ra cartoons. 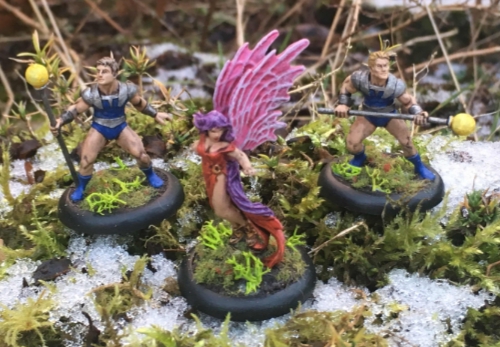 These are Flutterina, and two guards from Brightmoon, the heart of the Great Rebellion. Flutterina is a Reaper Bones miniature I picked up on holiday and the Brightmoon Guards are custom resin sculpts.
Flutterina is not a model I’m overly happy with. My wash heavy ‘style’ doesn’t go well on plastic miniatures with shallow details on, and Reaper Bones have some really shallow details.
To compound the issue, some fool in the 80’s designed he character with an orange dress, pink wings and purple hair. That was never going to work.
However, I’ve got her to a point where I’m happy enough with her as a really minor character. In game terms I’ll be using the stats for the Poltergeist from the Paranormal Exterminators programme guide as it flys, the ghost trait imitates her ability to shrink to the size of a butterfly and it’s telekinetic strike neatly reflects her using her wings to generate powerful blasts of wind.
The Brightmoon Guards are great sculpts, accurately reflecting their appearance in the cartoons, complete with tiny shorts (I bet Queen Angella enjoyed designing these uniforms). They have a very ‘space opera’ feel to them and wouldn’t look out of place in a Flash Gordon game.
I’m not exactly sure what their staff weapons are, but I’ll be using the Security Guard profiles and assuming the staff can be used as a cosh and generate blasts with a similar effect to an SMG.
And so that’s the Great Rebellion so far. Obviously, the most noticeable absentee is She-Ra - I’m still looking at a few options for the best way to represent her.
However, at the moment their limited numbers are not really a problem as there’s nobody for the Great Rebellion to rebel against. I’ll have to do something about that.
This weekend’s work has briefly taken my painting tally back to breaking even - Painted 9, Acquired 9 - however, the respite is only mometary as I’m off to Vapnartak tomorrow, which will include a visit to Crooked Dice, and there’s no way I’ll escape without miniatures. Looks like I’ll have to pick up the pace if my painting.
Posted by Kieron at 09:05