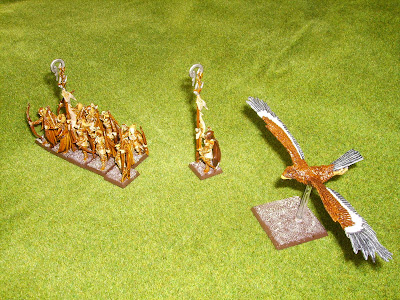 My Bretonnians are still some way away from table-ready (I'll wax lyrical about my thoughts on unpainted and proxies at a later date) and even fielding the grey hordes I wouldn't be able to put out the 2400 points needed for a game I've arranged in a couple of weeks. So, I turn to my other two armies; Vampire Counts and Wood Elves.

My Vampire Counts have been fairing quite well since the advent of 8th edition. I've not played many games, but the VC have won more than they've lost, largely thanks to the addition of a large number of Grave Guard and a certain magic hat. The problem is, however, VC are boring to play - at least to me. March quickly forwards, weather the storm of magic, if you've still got enough guys left, grind to victory. Also, I've still got all of those Grave Guard to paint too.

That leaves the Wood Elves. They're doing less well. During 7th edition, my Wood Elves served me well. They'd slow down, divert and annoy the faeces out of opponents and I'd pick off the smaller units to win. However, in the new edition, not only have small, vulnerable units gone the way of the dodo, but also diverting, march-blocking and avoidance are much less effective and big units of choppy guys now hit Mach 3 on their way across the table. All this has led to my Wood Elves not winning a single game in 8th edition.

I intend to change this.

I've spent some time perusing the interwebz to discover what others are doing to keep the Wood Elves competitive. The main answer seems to be, "BUY MORE TREEKIN!" However, this is directly in opposition to the principles of Cheaphammer. So I looked some more, applied Rules 3 and 7 and have added enough points to my army to bring them up to 2400 points.

Rule 3 came into play with the discovery of unpainted Glade Guard. The Blood and Glory scenario demands standard bearers and my minimalist Glade Guard units were the only place to put them. In addition, ranked shooting means I can increase the size of my units. Ten more Glade Guard added.

Rule 7 always comes up and surprises you. Whilst perusing Wargames Emporium (my FLGS) I spotted a Great Eagle for £3! Sorted. What's more, Great Eagles are one of the few units that can still divert effectively. Great Eagle added.

I know ten archers and a big chicken aren't going to suddenly make my army more competitive, but they are part of a new overall strategy, which I'll go into after I've had my next game - although I will say it doesn't involve more Treekin.

Now that the painting table is clear, it's back to the Bretonnians.
Posted by Kieron at 11:10