Another unit done! Well, I say done...I still want to add a few arrows to the unit to add to the feeling that they're under fire; sticking out of shields, embedded in the ground, etc. But that can wait for now as the main work is done. 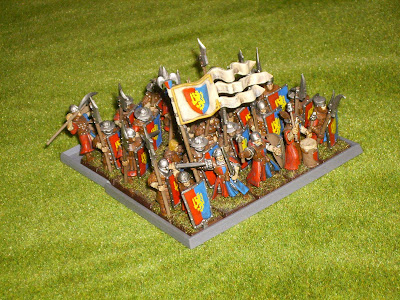 Well, it's only the 19th and I've already hit my June target which is quite novel for me as I'm usually a very reluctant and slow painter. However, this doesn't seem to be the case at the moment, and I have to admit that I think it's the blog that is motivating me. So, kudos to Lee for suggesting this whole project, as it's certainly working for me.

So after the first month, my army now numbers the following:

Admittedly, I've only actually painted 5 bowmen, 5 men-at-arms and 3 knights (the horses were already done), but if you throw in the 10 Glade Guard and Great Eagle and all the fiddly transfers I had to do (around 50!) then it's probably the most productive two weeks of my painting life.

So what to do with the rest of the month?

As mentioned before, I'm going to add a little to the men-at-arms and I might reward myself with a character or two, and finally I might see if I can add a couple more knights as I get the feeling that 6 knights aren't really going to make waves in 8th edition.

I'll do a full army shot at the end of the month as a visual measure of progress (kind of like those height charts on the back of your door when you're a kid).
Posted by Kieron at 13:26