The worst kept secret in blogworld is out...I've been working on a Dragon for my first Storm of Magic game this Thursday. It's an old Grenadier model I've had for years, and has had a couple of repaints in that time (it used to be bright red!). This time, I've touched up some chips in the painting, redone the eyes and mouth and given it a couple of washes. 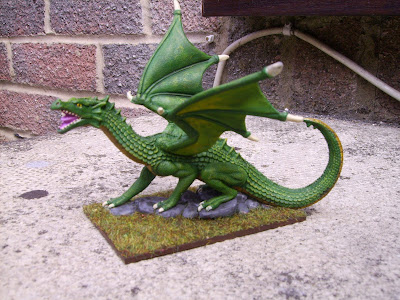 It will serve as a normal dragon in combined Wood Elf/Bretonnian army this week (my only summoned monster) and it will also go into permanent reserve should either army ever manage to cast Transformation of Kadon. Finally, the eagle rider I did last month conveniently fits on the neck and so I've now also got a Forest Dragon for my Wood Elves.

I was going to use an old D&D model as a Baby Dragon too, but as is the case with a lot of the Wizards of the Coast soft plastic stuff, the casting is horrible, so I abandoned that idea 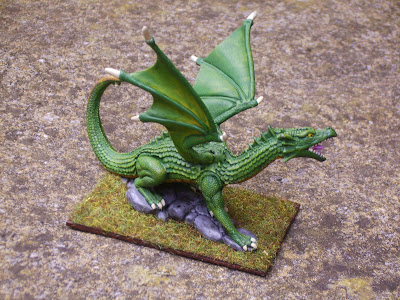 Following some advice, I've also taken the opportunity to use natural light for the photos. What do you think? Better? I might have to drag the entire army outside to take some new pics.

My next update it likely to be a battle report from the Storm of Magic game. I'm not holding out much hope given my record with both armies and the fact that I'm bringing only one monster and my opponent Andy has, I think, bought all the new plastic kits to add to his already monster heavy Beastmen army: Gorgon, Cygor, Razorgors, Chimera, Manticore, Cockatrice and even a Fimir Balefiend!

Still, as ever, I have a cunning plan...(they never work, but it helps keep my spirits up)
Posted by Kieron at 07:23