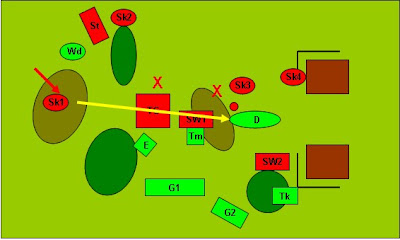 Whilst a unit of Skinks forced the Dryads to flee through the entire battleline, the Oldblood's Saurus unit amazingly failed a second charge on the Glade Guard, and the Skirmishers and Stegadon again played hide and seek with the Wardancers. The Magic phase saw the return of the Net of Amyntok. The Skinks finished off another Eagle and along with the giant blowpipe on the Stegadon, began to whittle down the Wardancers. Combat saw the Treeman munch some more Saurus and the Temple Guard demolish the remaining Wild Riders and then reform to face the Glade Guard.

In my turn there was only a little movement as the Dryads rallied, the remaining Eagle shuffled into redirection position again, and the Wardancers decided to try to head for safety. Magic was another complete wash out and shooting (limited by the Net of Amyntok) took down only a couple of Saurus. The Treeman splatted a couple more Saurus, but the blighters wouldn't break.

The tide had definitely turned... 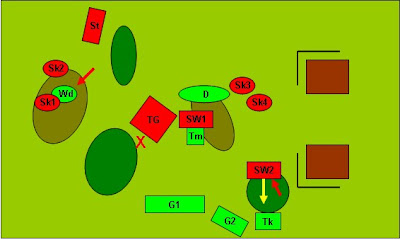 Full of blood lust, the Temple Guard took the bait and charged the Eagle. The Lizardman BSB returned to his unit to join the fight against the Treeman, and Skinks circled looking for targets. The Speed of Light was again cast, this time on the BSB's unit and the Treeman looked in trouble. Poisoned darts took down a few more Dryads and all but two Wardancers. The Eagle was duly splattered by the Temple Guard and the Treeman was beaten in combat and lost a couple of wounds, but held his ground.

Knowing how this was going to go, I decided to make a last ditch rush for points. The remaining Wardancers charged a Skink unit, and the Treekin had another go at the Oldblood's Saurus unit, who were now in a wood and not steadfast. The Glade Guard dropped back fired a desultory volley at the Temple Guard. The Wardancers won, unsurprisingly, and the Treekin lost, also unsurprisingly. There was now nothing between the Temple Guard and the Glade Guard. 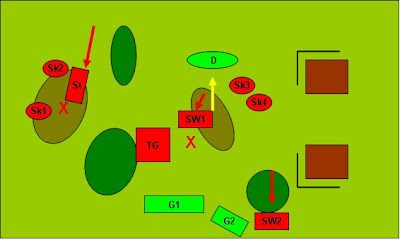 Stuart finished with a number of charges. The Oldblood's unit chased the fleeing Treekin off the table and the Stegadon made an outrageously long charge against the Wardancers. Meanwhile the Temple Guard failed to make contact with the Glade Guard. Speed of Light was cast again and with a lack of viable targets for shooting, we moved to combat. The Treeman and Saurus continued to tussle and the Stegadon steamrollered the Wardancers.

In my turn, the Dryads charged the rear of the BSB's unit and the Glade Guard failed to kill anything significant. With my magic once again shut down, the end of the game saw the Treeman finally cut down by the magic enhanced BSB and the Dryads again break from combat.

The result; a resounding win for the Lizards!

Overall, I'm not unhappy with the game at all. Magic was a pain, and my shooting didn't achieve much, but I consider that balanced out by Stuart's appalling charge rolls. To my mind I made only a few mistakes:
Stuart deserved the win, but for the first time in a long time with the Wood Elves, I felt this was a game I could have won with a bit more thought. I can feel a win coming soon...

(Apologies to Stuart for any mistakes - I think the re are a few in the last couple of turns, but the gist is the same).
Posted by Kieron at 10:28