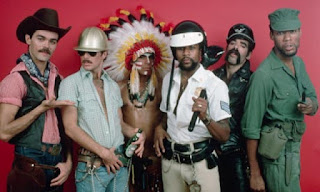 No! Not those ones. Well, maybe the one in the middle...

With the summer holidays started, ive begun to pick up pace and I've managed to get my Native American villagers done. 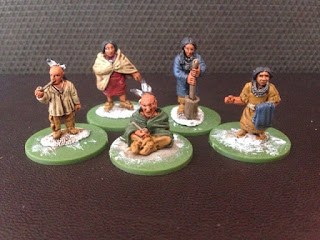 Even more so than with the warriors, I've kept these simple as they'll ultimately enjoy even less table time. However, they'll make for a good objective in scenarios, and I might have a crack at making a lodge at some point (or even a wigwam as a kind of creative trolling :) ).

The miniatures are from Redoubt Enterprises and I'm torn about them. In the one hand they're quite characterful with nice details, on the other, the casting is really rough and ready. The woman grinding corn has a massive mould line down the centre of her face which I couldn't get rid of, and the children are quite flat miniatures. My settlers are Redoubt too and I've found quite a few miscasts amongst them. Redoubt are affordable, but a bit 'buyer beware'. 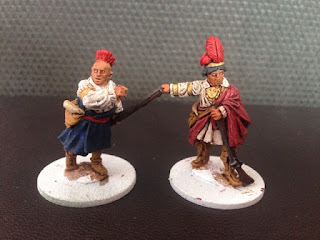 Again, these are Perry and you can see the difference between them and the  villagers in terms of quality. I think I'll take a little flash removal over miscasts and oddly shaped heads.

The chief on the right is clearly based on Chief Joseph Brant, a famous Mohawk Chief during the French & Indian War and so I aimed to paint him in a similar way to the paintings I found of Brant. 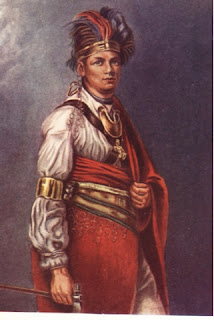 The other Chief was done in colours of a vaguely French theme as I may end up splitting my warband to fight on different sides and I wanted an easy way to decide who was on which side. Yes, I'm aware that the French hadn't adopted the the tricolour at this point, but white would not make for an interesting model. I also figured that blue would work for the handful of natives who fought on the side of the United States in the War of 1812.

So that's all my Woodland Indians done (well, except for a baby in a crib, and a dog urinating against a tree), and now I have a couple of days to get them all based...