Well it's bonus time in June and here's a bonus figure - a Grail Damsel/Prophetess of the Lady. She'll lend much needed magic support to my troops and possibly be packing the Prayer Icon nof Quenelles to grant the unit she's with (probably the Men-At-Arms) the Blessing of the lady (6+ ward save, 5+ vs Strength 5 or more) to give them a bit more backbone before she naffs off to hide with the Peasant Bowmen.

This is a model I picked up at last year's Triples show in a blister pack with a mounted Damsel for £2.50 (Rule 7 again), I got a Battle Standard Bearer and a character model who is going into my Questing Knights for the same price each. 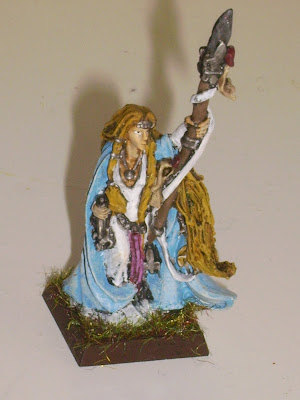 As you can probably tell, the close up of a single model reveals some of the limitations of my painting. Although I personally think she looks better in real life than in the photo. I've never pretended to be very good at painting and my stuff certainly doesn't hold up to too close a scrutiny and won't win any prizes.

However, recognising this I've always aimed for the models I paint to look good on the table top and add to the aesthetics of the game. I feel I achieve that more often than not and I'm happy with Giselle...yes, she's got a name!

There's another six days to go in June so there might be another addition before the month is out, but there will certainly be a full army shot this week. There's also the Blood Bowl final to come in which I don't think I've ever been a dog so under - but whatever happens, you'll read about my side of it (be it gloating or griping) here!
Posted by Kieron at 12:27