Much to my, and everyone else's surprise, my Ogre team, the Tinys 'n' Titans, have managed to qualify for the final of the club Blood Bowl tournament, successfully negotiating their way past Wayne's undefeated (until now, tee hee) Chaos team, the Slaanesh 69ers. 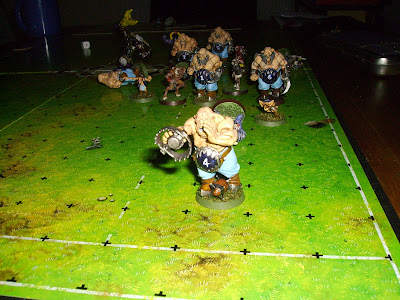 To be fair, I'm slightly baffled myself as Wayne knows his way around a Blood Bowl pitch and his team were phenomenally well developed, sporting Block and Strength increases all over the place.
I did benefit from a distinct lack of failed Bonehead rolls an so was always able to act in my turns. However, I think that a big part of it was from my cunning plan of largely avoiding getting drawn into a big fight in the middle of the field with his Minotaur and Chaos Warriors, and really putting pressure on his Beastmen to reduce his mobility.
Combined with a moments of daring such as a Snotling breaking for the end zone on his own and a desperate blitz and pass combo to prevent a second half equaliser, the dice were favourable enough to allow me a 2-1 win and a trip to the final.
Ah...the final. Not only will I be an Ogre down, but also I'll be facing Tom's Chaos Pact team, the GIMPS (terrible name), from the Pro League and therefore massively advanced. In fact one of two things in my favour if the fact that to my knowledge there will be something like a 450,000 difference in team values.
The other thing in my favour?
I'm ace!
Posted by Kieron at 11:04