First Blood...all over the place!

The Bretonnians have finally marched to battle for the very first time and proved to be COMPLETELY USELESS!!!

The was the first game in the X Gamers campaign we've organised to accompany the project and featured Lee's Chaos Warband raiding the shores of Couronne, only to be met by a hastily mustered militia. 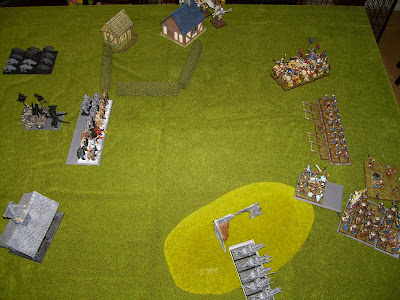 Lee took first turn, as I had opted to pray to gain the Blessing of the Lady, and initiated his cunning plan of walking slowly towards me with troops that were much better than mine. His Marauder Horse whipped out to the flank to threaten my Men at Arms.

From the picture you can see I had placed my archers in the centre, and therefore hindered my own deployment (mistake 1). I then turned my Men at Arms to face the Marauder Horse (mistake 2) and opted to charge the front of his Chaos Hounds with my Pegasus Knights (mistake 3).

Add to this the fact that my first ever use of a war machine was a misfire and that my archers couldn't hit a barn door from ten paces, and you'll understand that things had started badly and would rapidly move downhill. 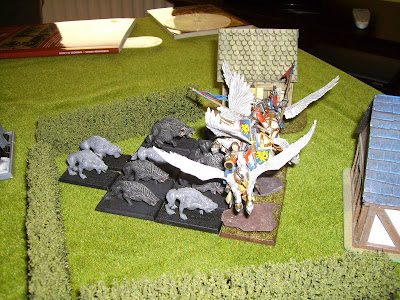 Lee continued to advance and I continued to shoot at him...and miss (in fact the Haunted Mansion was doing more damage than me). I was able to slow him down with a casting of the Curse of Anraheir on his Knights (and once I told him what would happen, Lee wisely opted not to charge) and tried to redirect with my Reliquae.

It was only a matter of time before he got an opportunity to charge and the next turn the Marauders, Knights and Warriors all charged. The Knights failed their charge on my Knights of the realm and obstructed the charge of the warriors and so the Marauder Horse charged the Grail Reliquae's flank unsupported. Over the next couple of turns, the Battle Pilgrims got the upper hand and the Marauder Horse were routed.

Meanwhile, the Chaos Knights had set themselves up for a counter charge by the flower of Bretonnian chivalry. The Knights of the Realm charged... 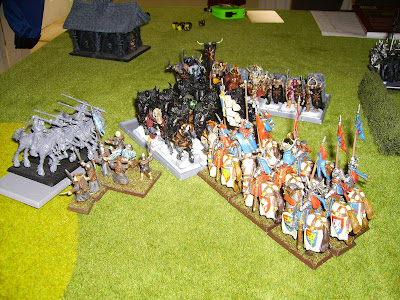 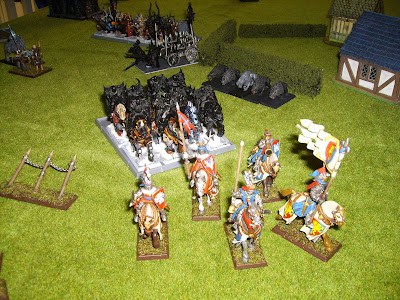 The panic that spread from the destruction of the knights caused this to happen... 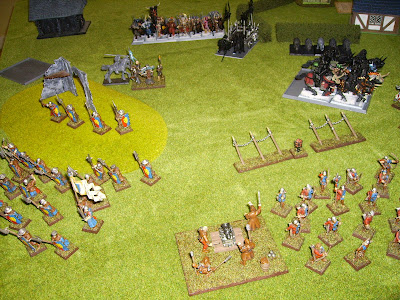 Things I have learned from this humiliating defeat:
Posted by Kieron at 05:37