This weekend I 'ave mostly been paintin' fings wot fly.

The Wood Elves have got another game of WFB coming up on Thursday against Stuart's Skaven and so some of my focus recently has been adding a touch to my army due to the fact that Stuart curiously asked for 2500 points rather than what seems to be the rather more regular 2400.

Do you get that feeling that he's got plans for the extra 25 points that gives him in Lords or Rares?

My army doesn't really stretch that far without being silly, so I set down to add just a touch to it: an Eagle Rider and another 'Great Eagle'. 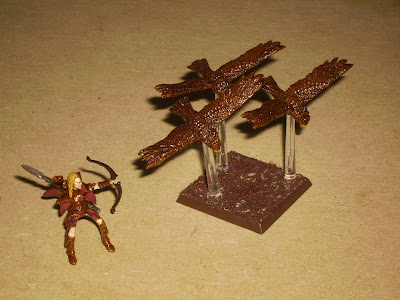 The Eagle Rider is to allow me to use one of the Eagles I already have in a different way and to add that bit more of a threat to war machines that I felt I was lacking against Shane's Tomb Kings. However, a little bit of memory jogging about the Skaven on a few forums reminded me that the Storm Banner would probably completely negate the pricey little blighter, so he won't be seeing action this week.
The Flock of Eagles is a classic bit of Cheaphammer and since it's been a while since I discussed the rules, they give me a perfect segway into a few more:
Rule 9: Shop creatively.
This is linked to Rule 2, but involves models you don't yet own. Whilst perusing your FLGS, look at ranges beyond what you are specifically interested in and open your mind to the possibilities. This is particularly useful when you are stepping away from Games Workshop merchandise, as most other manufacturers are significantly cheaper (this DOES NOT include Privateer Press who clearly make their models out of crystallised angel tears, as they're so expensive).
The Eagles are Great Eagles from the 10mm Hordes of Things range and effectively represent a flock of smaller birds at the Wood Elves beck and call. They also take up roughly the same amount of physical space so the 'line of sight facists' (the arch-enemies of all Cheaphammerers) can't really complain (although it won't stop them, the swines!). GW Great Eagle (£15.50)...my flock (£5).
Rule 10: Stick with your army.
Not specifically tied to the Eagles, but linked to the fact that I'm still plugging away with the Wood Elves.
GW wants you to change armies. This is fact. They introduce a new army with spangly new models and flashy new rules that mean you will automatically win and you're meant to go, "Oooooh...shiny!" and buy it like a sucker, re-mortgaging your house in the process. Then, over the course of new editions, FAQ's and other shinier new armies, you're army is relegated to the realm of the also-rans (Ogreville) and struggles to compete. This is meant to frustrate you and turn you towards the new shiny armies.
DO NOT GIVE IN!!! It is massively cheaper to stick with your army, until you finally get the shiny treatment than it is to start from scratch every year or so. So you may have to add a new unit, or change a few bases to make what you've got work with a new book, but this is pennies in comparison with start up costs.
I've had my Vampire Counts army since I was 11. My Wood Elves are about six years. I'm only doing Bretonnians now because I'm Cheaphammering for England.
And with another perfect segway, over to my current progress: 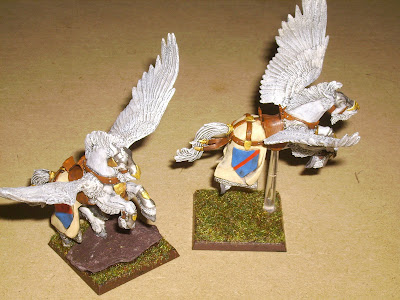 Not much so far, two pegasi (or is that pegasuses?) and one horse, minus transfers and a bit of slate for one of the bases (I need to walk past the house down the road again). I've started work on the other two horses for this month's target, but I have to admit, I hate painting horses. This sounds funny from someone voluntarily building a Bretonnian army (although, in my defence, I didn't choose the army, it chose me - Rule 1), but I find them a real chore. I think this is because horses, being plastic and with limited poses, lack personality or character. I find that other stuff I paint tends to come alive as I do it; horses don't, and so painting them drags.
What's more, I really buggered up the horse. It was originally going to be the BSB's mount, but due to misjudging a colour scheme I've had to do a bit of slavage work and it's actually my least favourite horse that I've done for this army. His rider will be relegated to the back ranks until the end of time because of this. 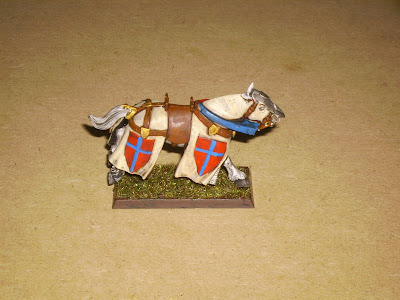 Anyway, by next week I should have two more horse done and be on to the knights (which are a bit of a doddle), including the BSB. What's more I should have a proper battle report, possibly even with detailed maps (although don't hold your breath). Finally, later in the month, I'm hoping to bring you the essence of Cheaphammer in one unit as my first bonus figures, complete with an analytical deconstruction of how a small unit can meet most of the rules in one fell swoop...how exciting!!!
Posted by Kieron at 12:23