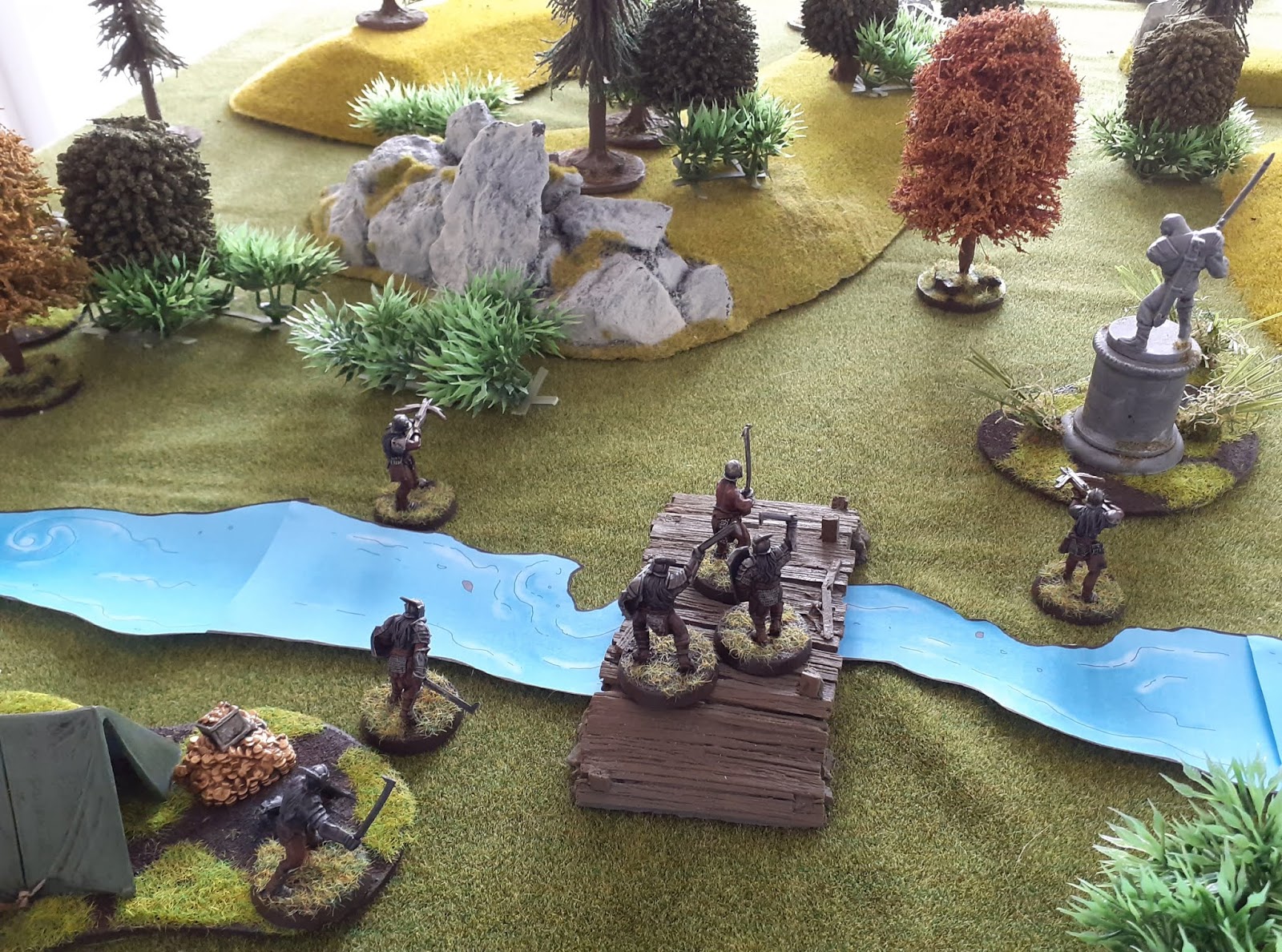 From the chronicles of Brother Rendall...
Is there to be no end to this?
Only hours after we arrived back from destroying the nests of spiders, Master Venkh received a message from his commanding officer. Contact has been lost with the beacon tower of Tor Varden, and it is presumed to have been overrun. We are commanded to proceed with all swiftness to Tor Varden to ascertain the truth. If the tower has fallen, we must learn what enemy forces now occupy it and harass or eliminate them as opportunity presents.
We shall be accompanied once again by the Lady Shevarith and her retinue, Troughton and Wormtail. Nardol, the villager we rescued, has bravely offered to join our quest, but I fear the perils we shall face will be beyond him...in truth, I fear they will be beyond me. 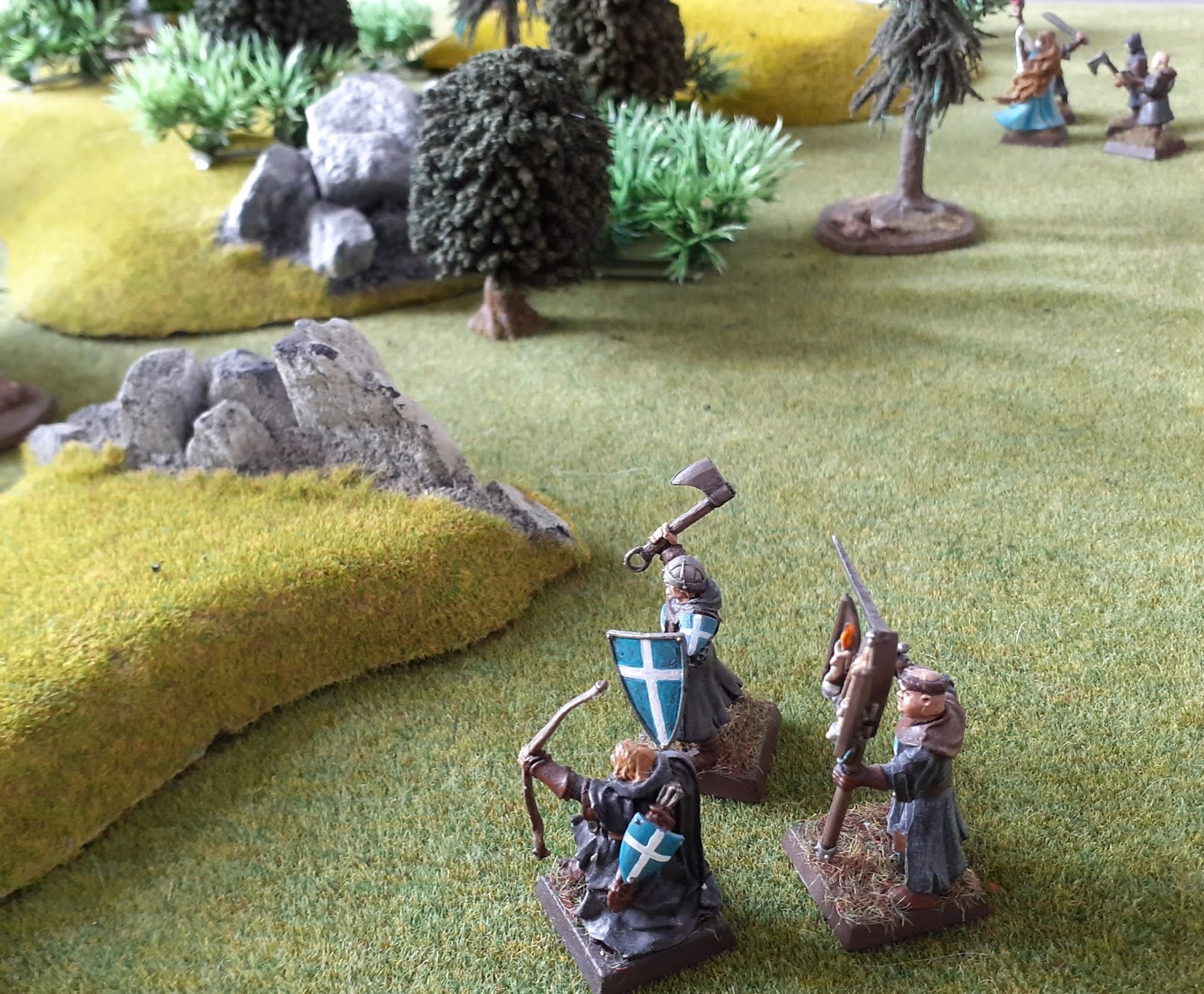 .    .    .
As we made our way towards Tor Varden, the gentle, rolling hills slowly gave way to rocky woodlands, and finally into the boulder-filled dell known locally as ‘the Tangle’. It is an overgrown, unnerving place – a perfect site for an ambush as the large rocks and trees cut lines of sight down to just a few yards in most places. Proceeding cautiously, we eventually heard the Enthel River, which we knew we must cross to reach Tor Varden. As we approached, however, we heard other noises as well, nearly drowned out by the river. Voices, of some inhuman type, a language filled with snarls and guttural grunts. Climbing to the top of a large boulder, keen-eyed Garvin got a clear view down to the river, and he reported that standing astride the old stone bridge was a knot of hobgoblins, and, judging by the large cooking pot they had set up by the fire, they were camped there to guard the bridge. Master Venkh predictably decided that there was nothing for it, the hobgoblins would have to be eliminated, as quickly and quietly as possible. 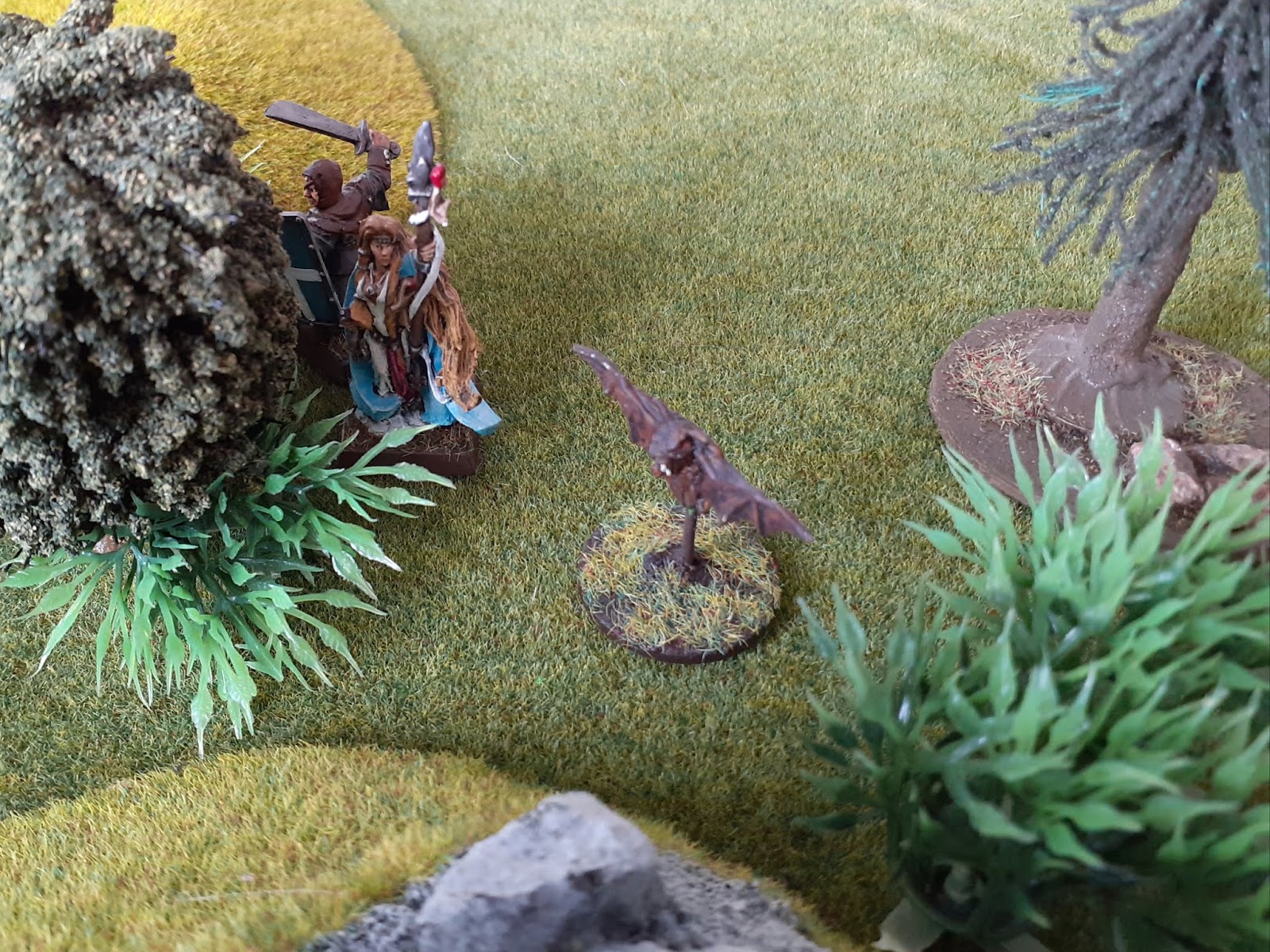 As we stealthily made our way through the undergrowth, our position was almost given away by another of those great, foul bats we had faced in the village, however, Lady Shevarith quickly and quietly brought it down with a blast of mystic energy. 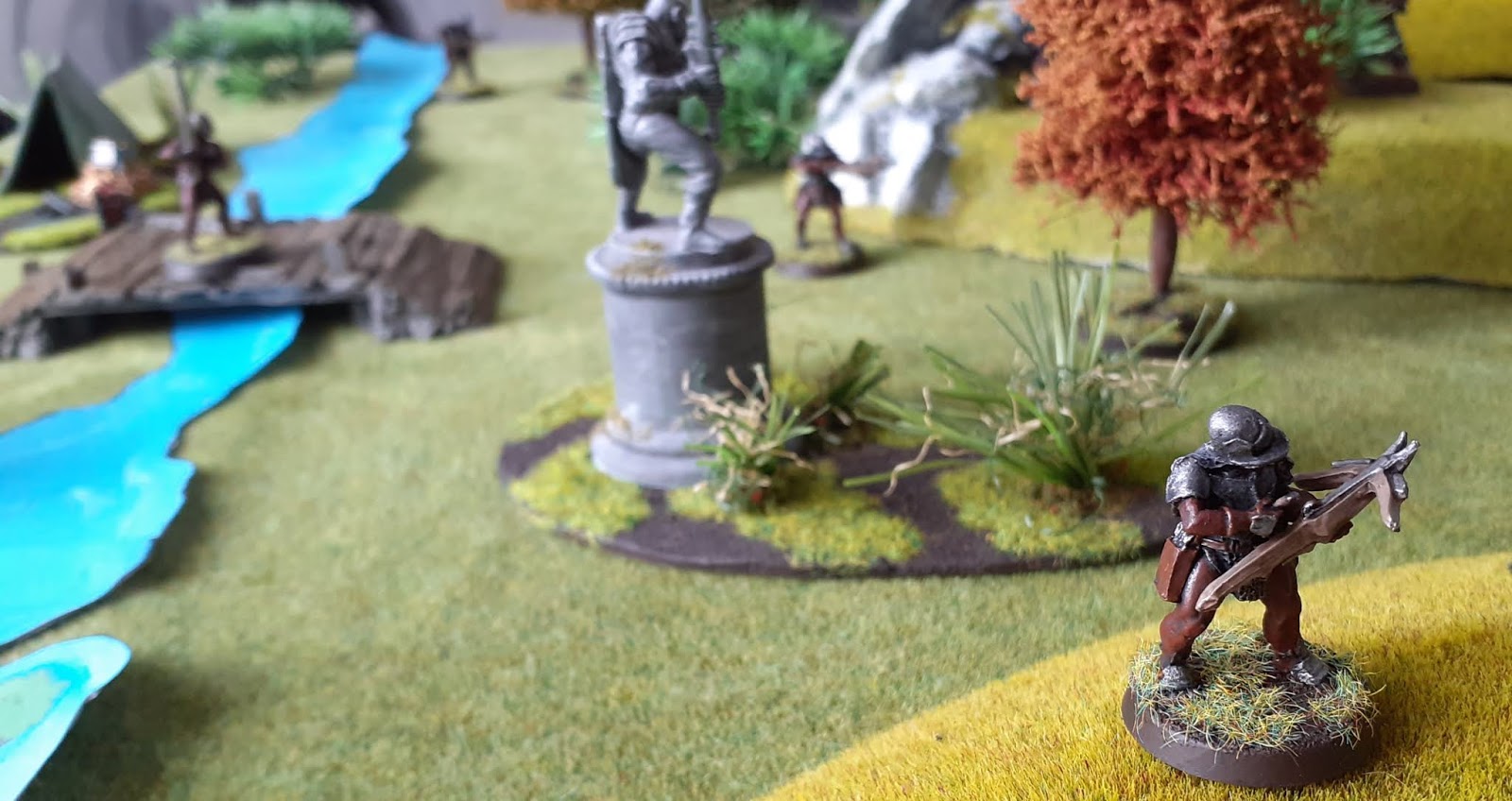 However, the noise of it falling into the undergrowth must have been heard, as we spied some of the bridge guards cautiously approaching our position.

We were spotted though, and we split up to edge closer, trying to choose the right moment to launch our attack.

Indeed, Master Venkh managed to approach close enough that he said he could hear one of the beasts breathing. With us about to lose the advantage of surprise, Shevarith launched the attack with a well placed magical bolt that shot through the trees and stuck the great brute on the bridge, that I took to be their leader, square in the chest. 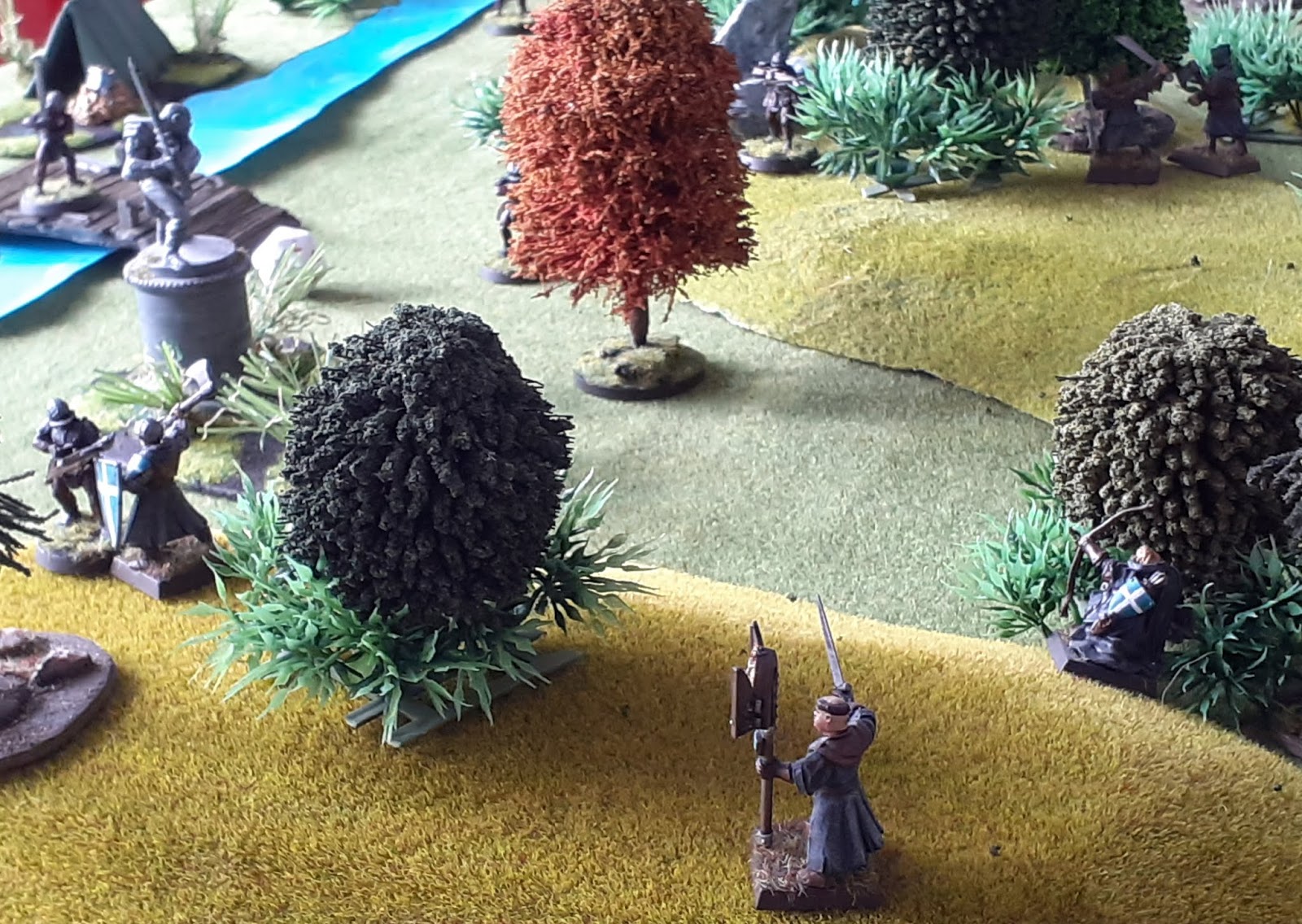 In a move that was totally in character, and without thought for his own safety, Master Venkh charged out of hiding with a blood-curdling yell. Garvin took up a position to fire onto the bridge, whilst I looked on, foolishly standing in the open and only narrowly avoiding a grim fate as a crossbow bolt nicked my shoulder. 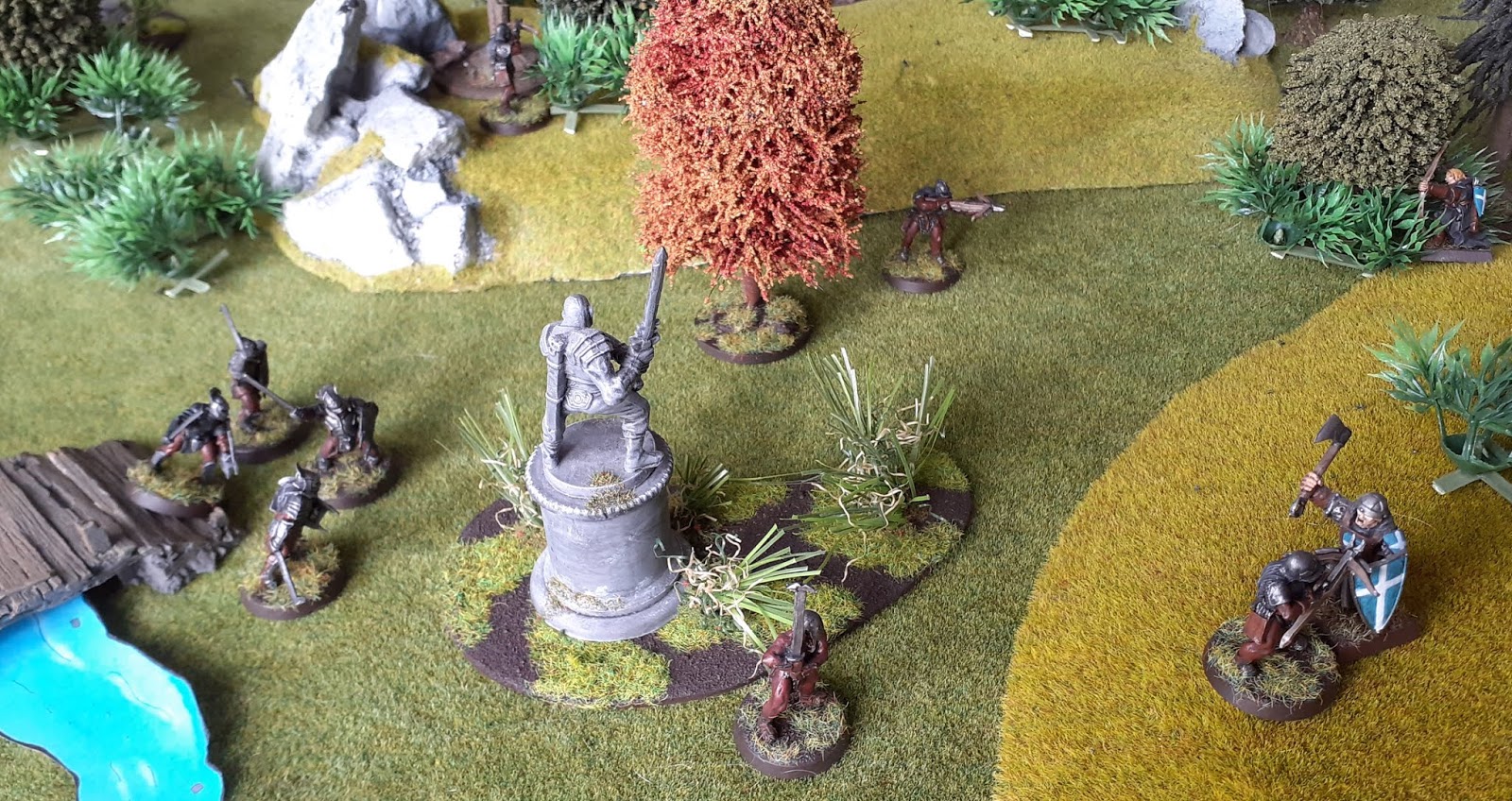 My master's charge somehow failed to bowl over his opponent, but succeeded in drawing the attention of the entire hobgoblin war party towards him. 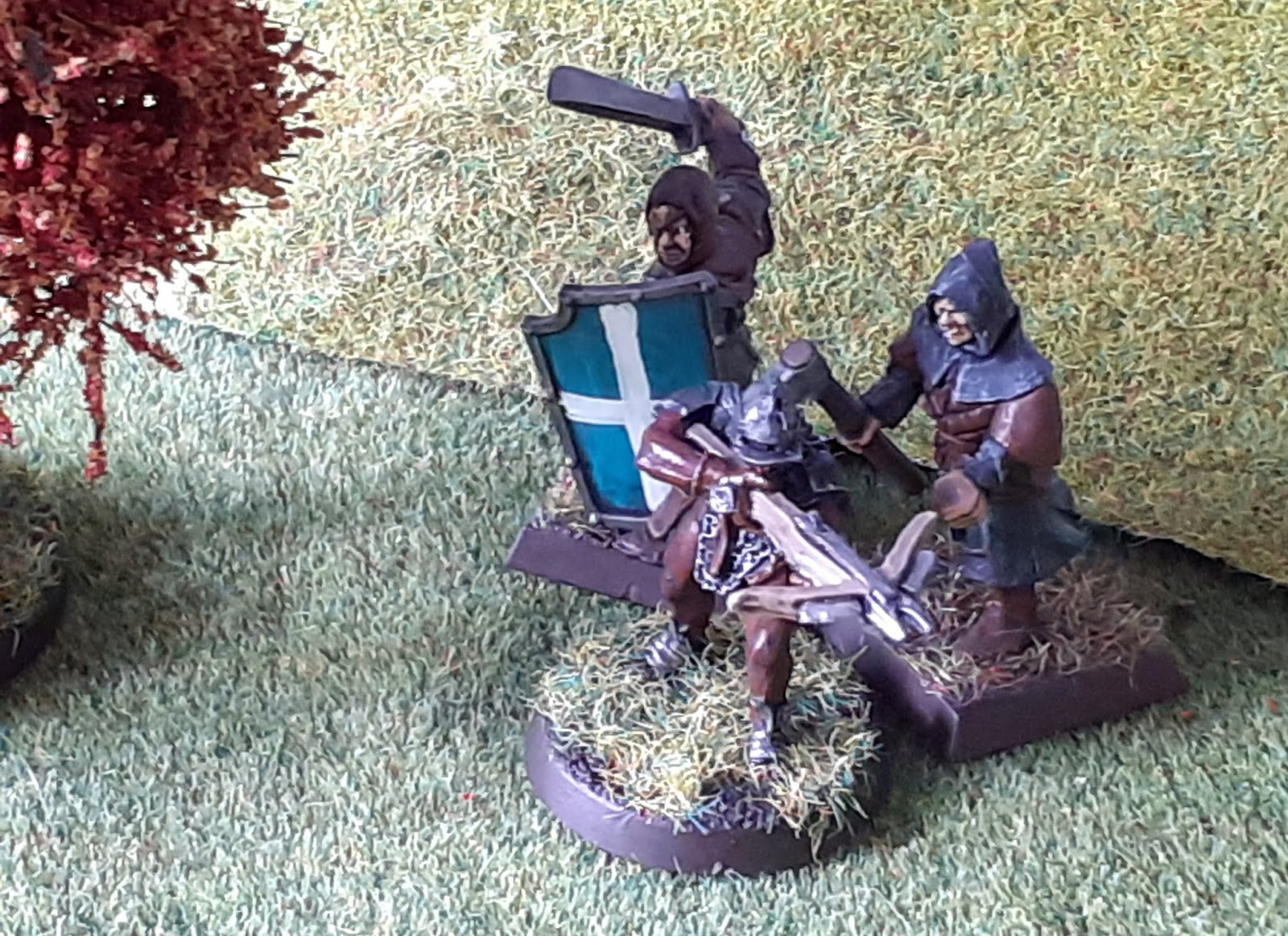 However, this distraction allowed Troughton and Wormtail to launch their attack, hacking down one of the creatures from behind. 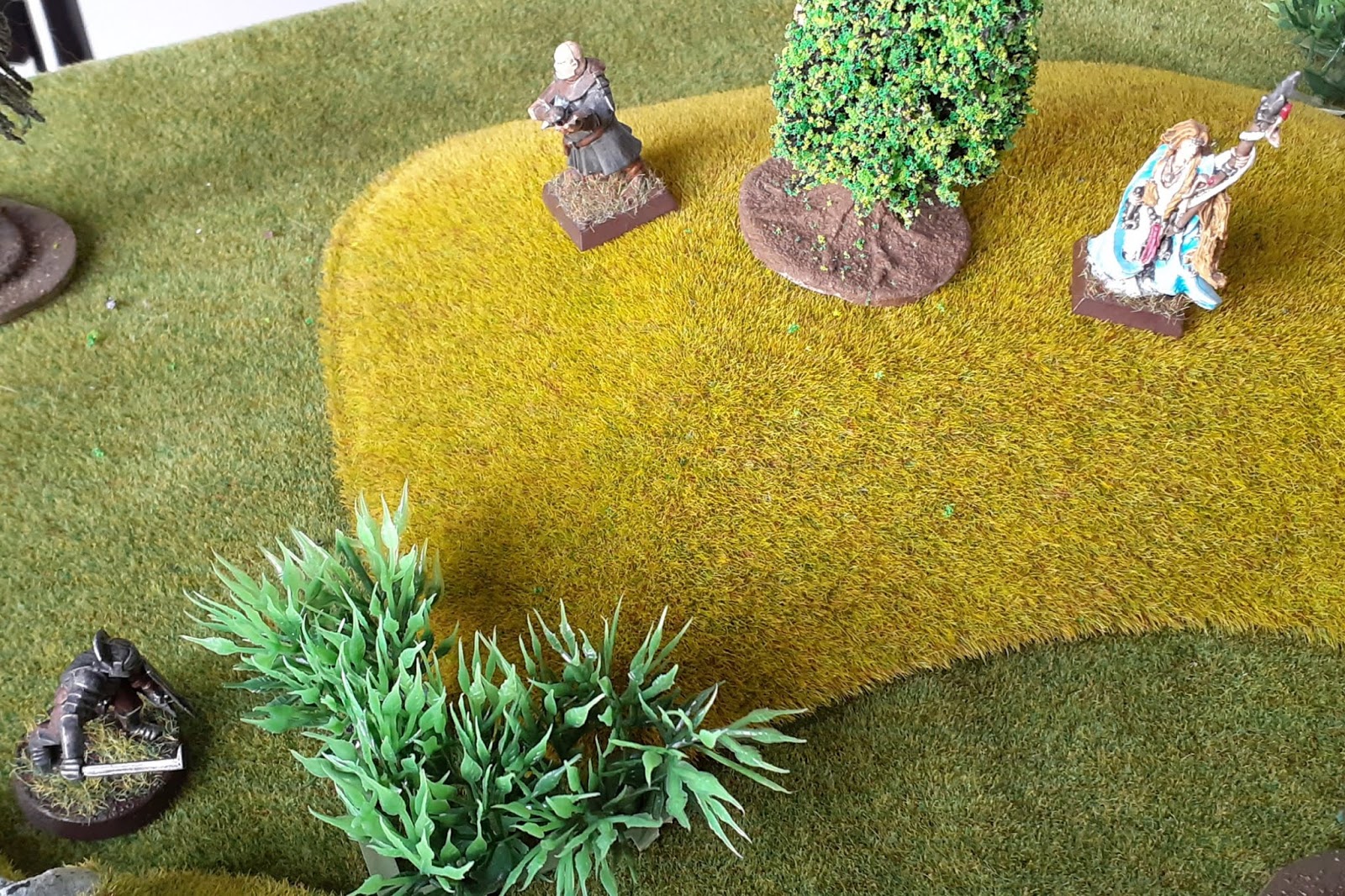 Despite having surprised our foes, we were surprised in turn as hobgoblin we were previously unaware of leapt from the undergrowth towards Shevarith and the foolhardy Nardol. 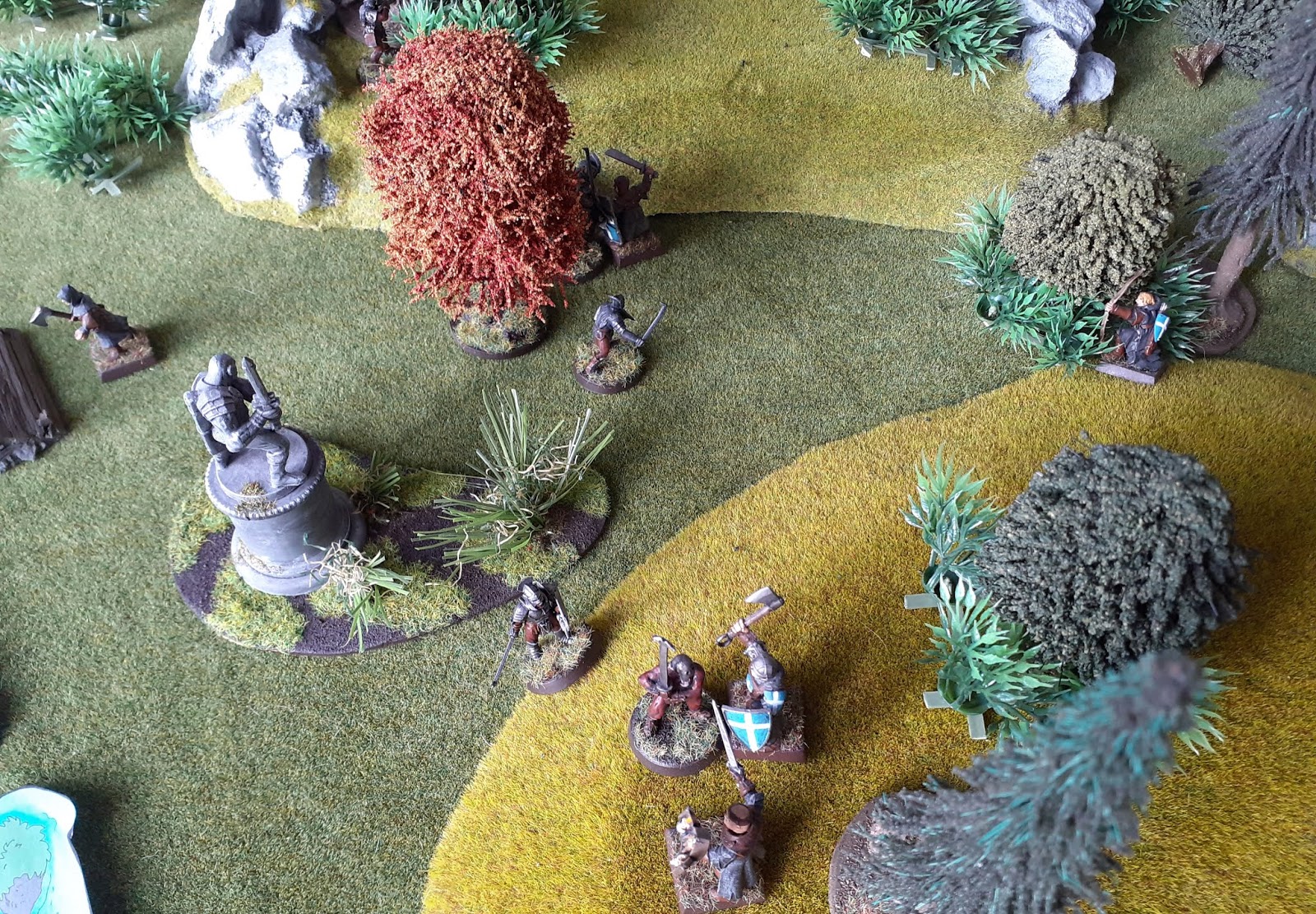 Things looked grim. Although my master had felled his initial foe, others, including the brute, had rushed to take its placed. I hurried forward to aid my lord, but we were sorely pressed. 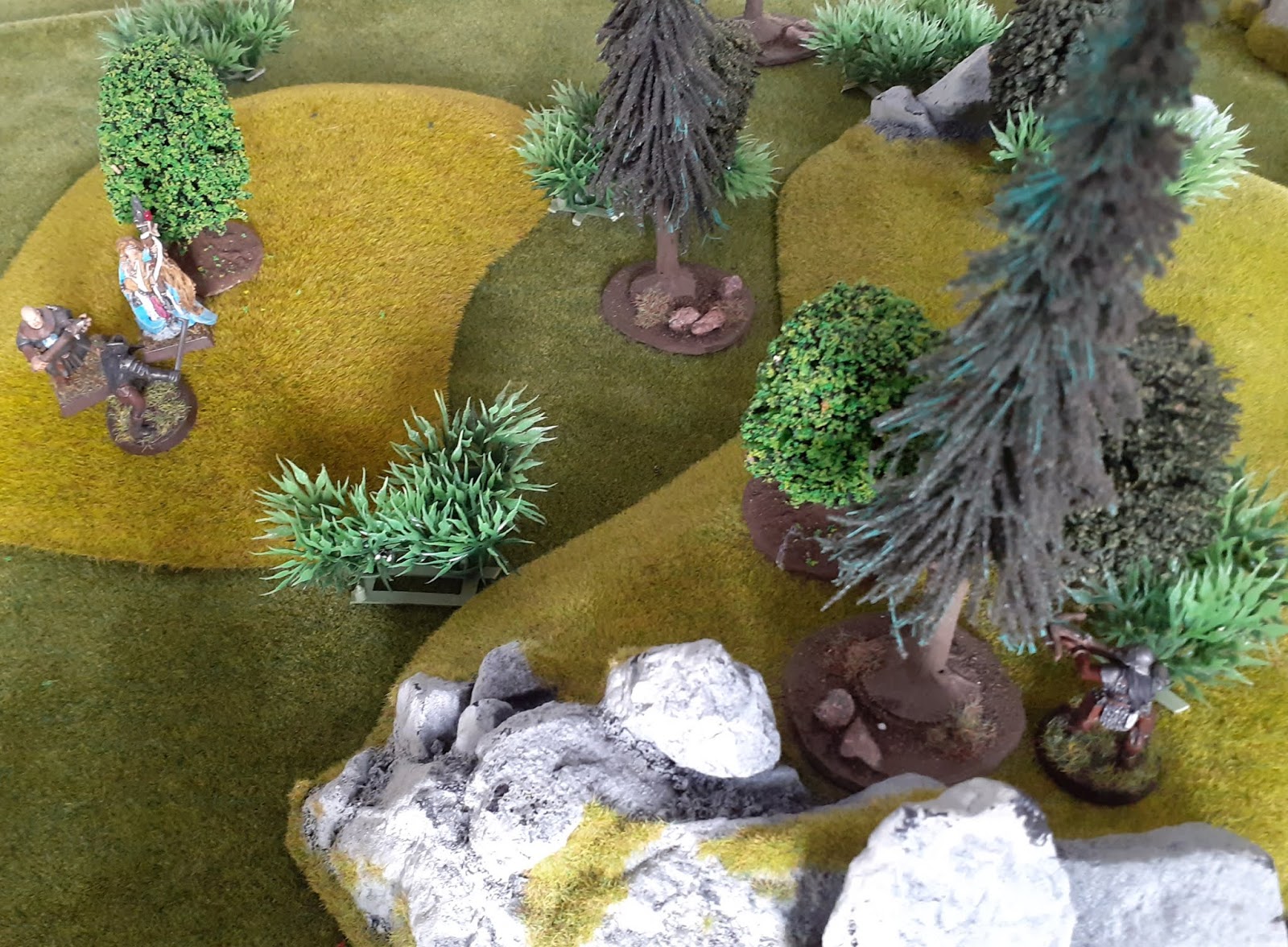 Similarly, the Lady Shevarith and Nardol, neither of them overly skilled in melee wre kept from aiding the main fray by their surprise assailant. 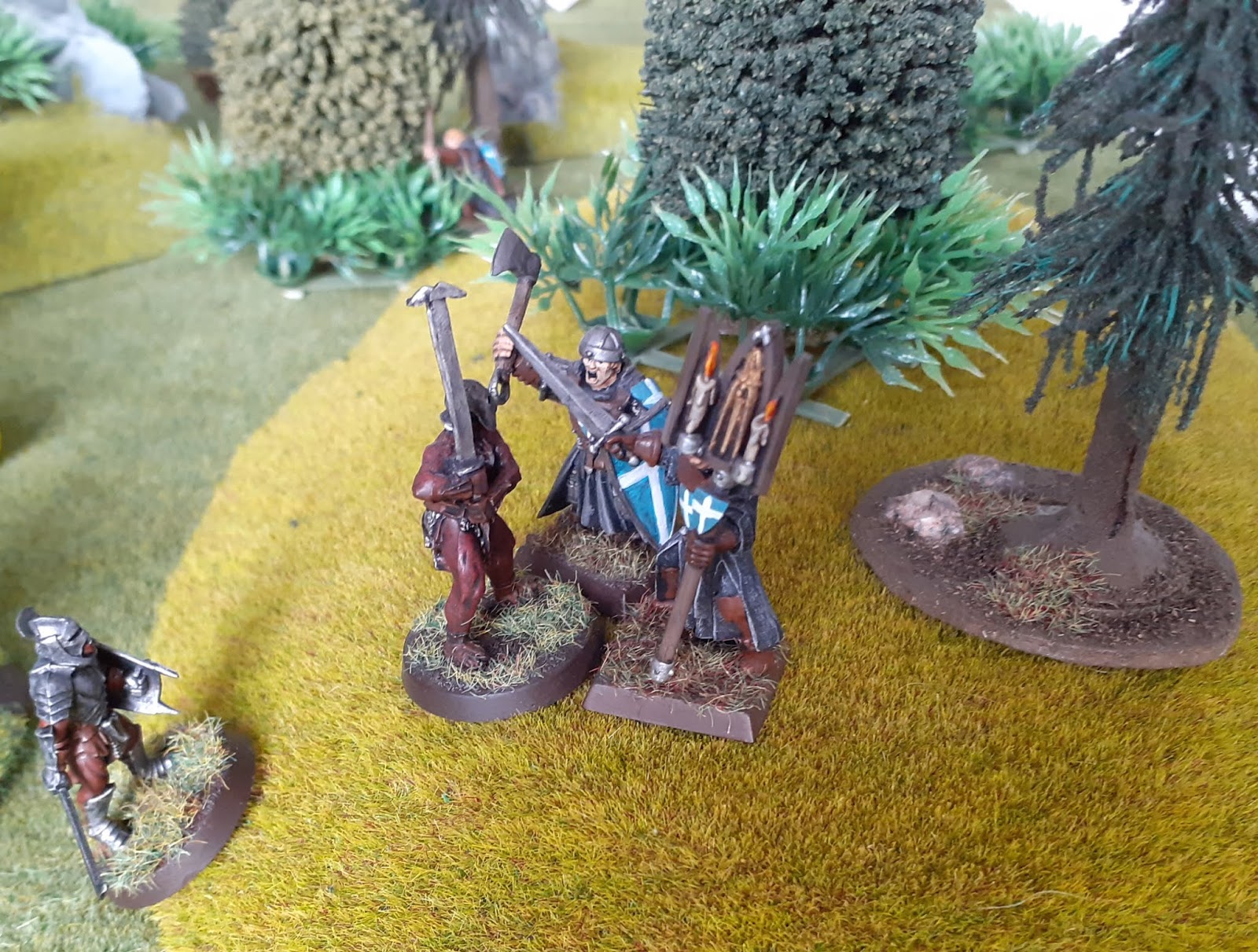 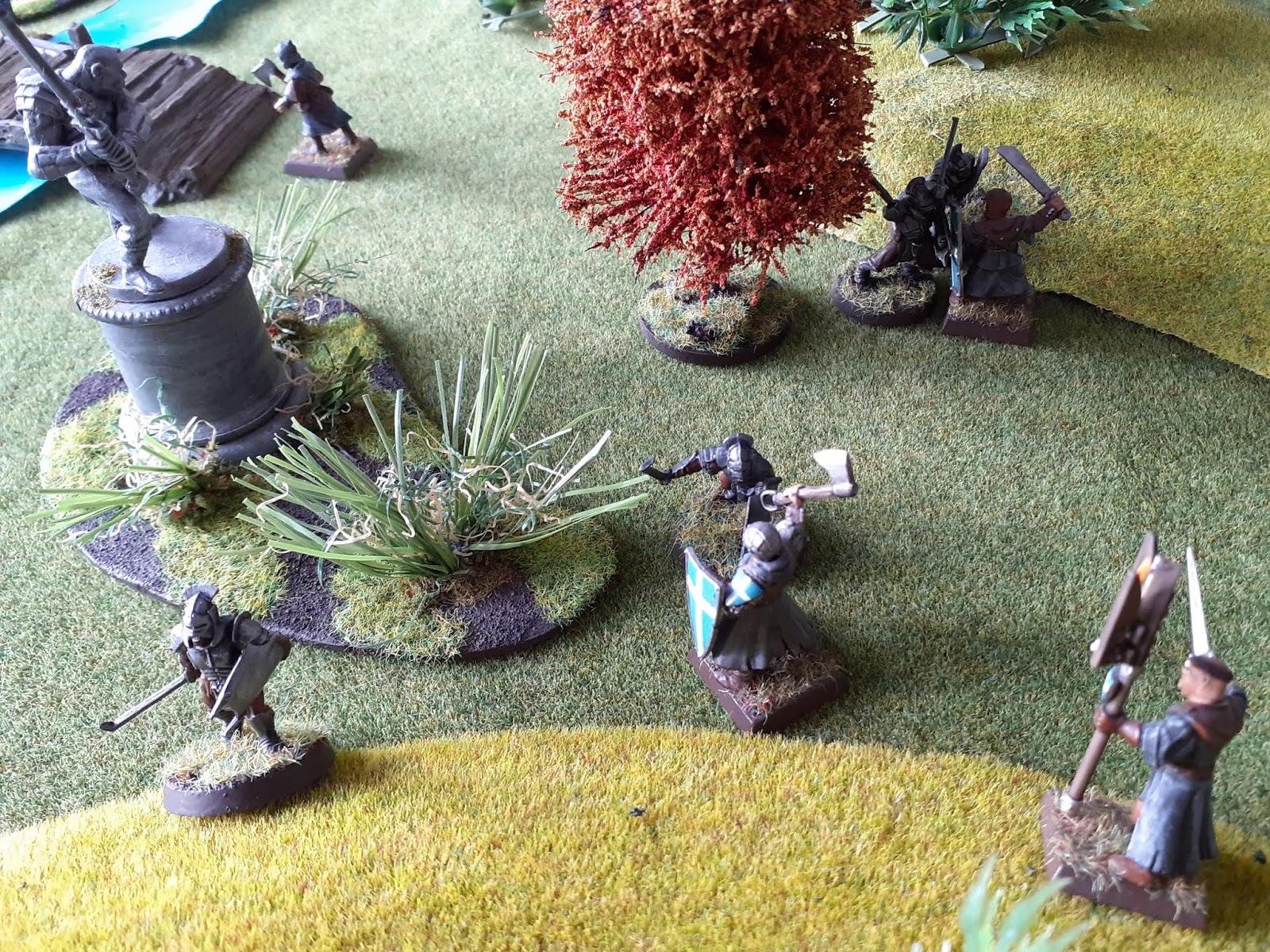 My master then nobly rushed down the hill to draw enemies away from the stout hearted Troughton, who looked like he might be overwhelmed, because it seemed that Wormtail had deserted him and left him to fend for himself. 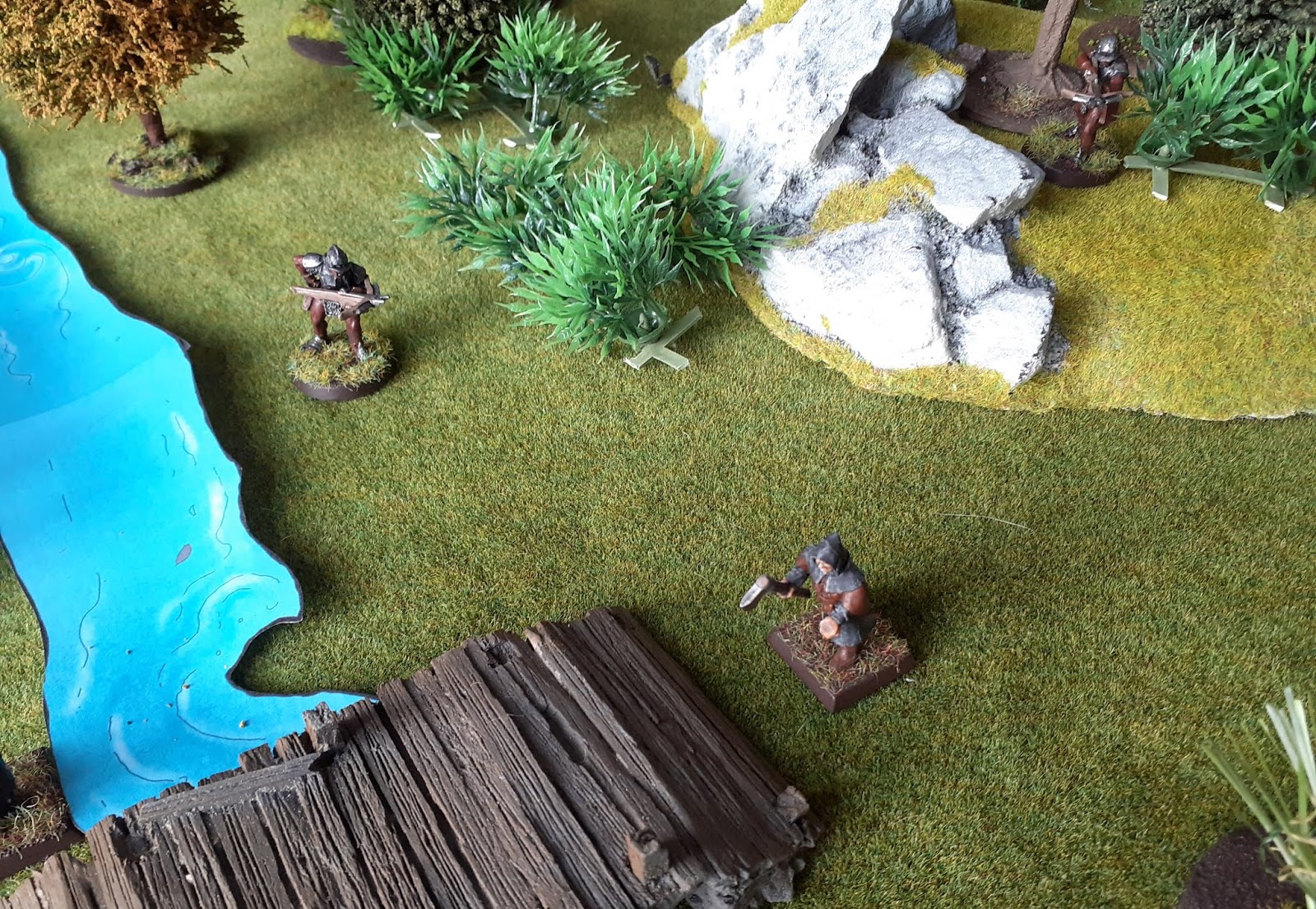 I can only imagine that the ill-mannered Wormtail had thought to loot the enemy camp for his own benefit, rather than stand with his comrades. If this was his goal, he did not benefit as he pitched forward when struck by a crossbow bolt, and did not move. 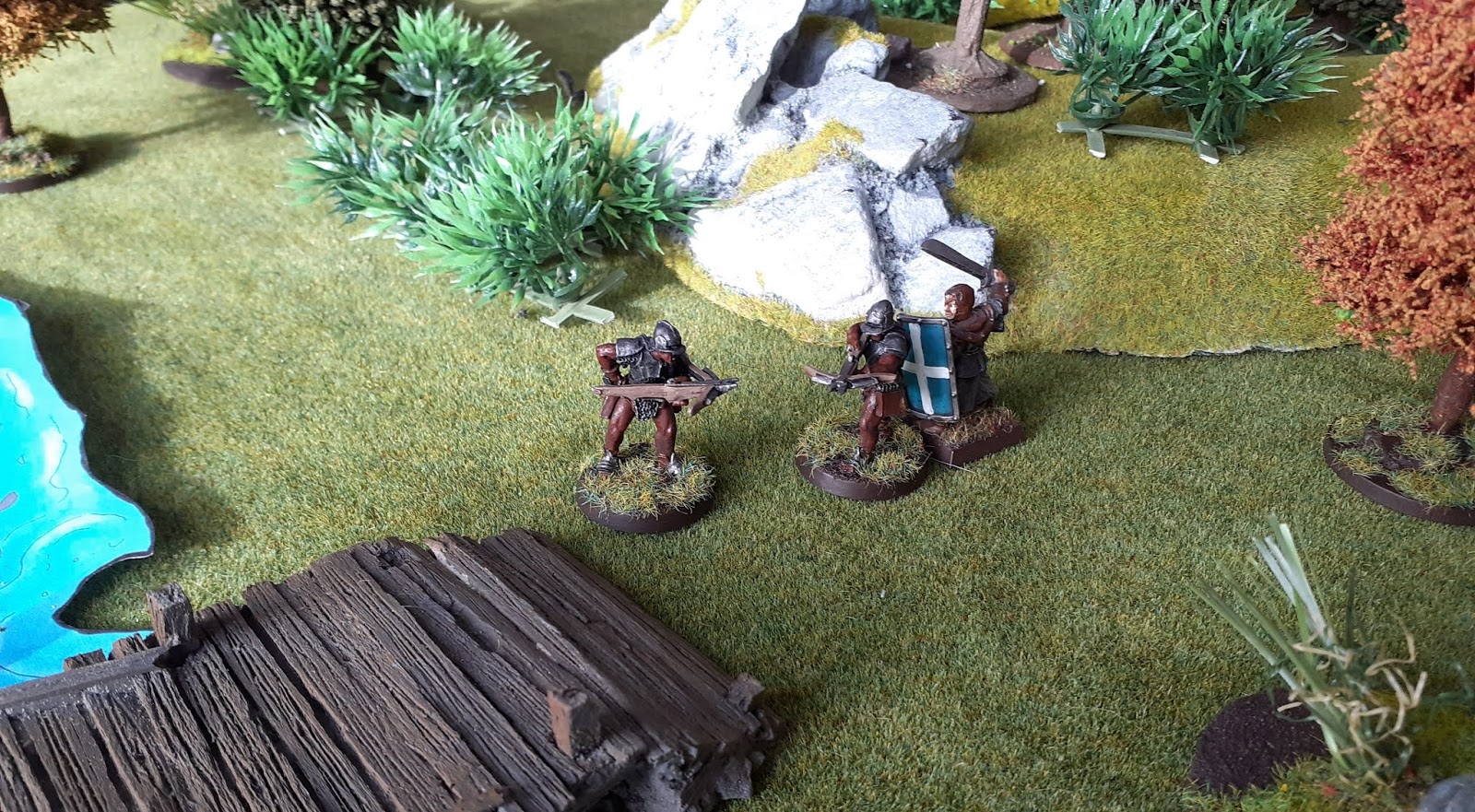 Seeing his 'friend' fall seemed to enrage Troughton, who cut through a swathe of foes to reach the fallen Wormtail. He must have discovered that Wormtail's wound wasn't mortal, as after a moment, he pressed on towards the bridge. 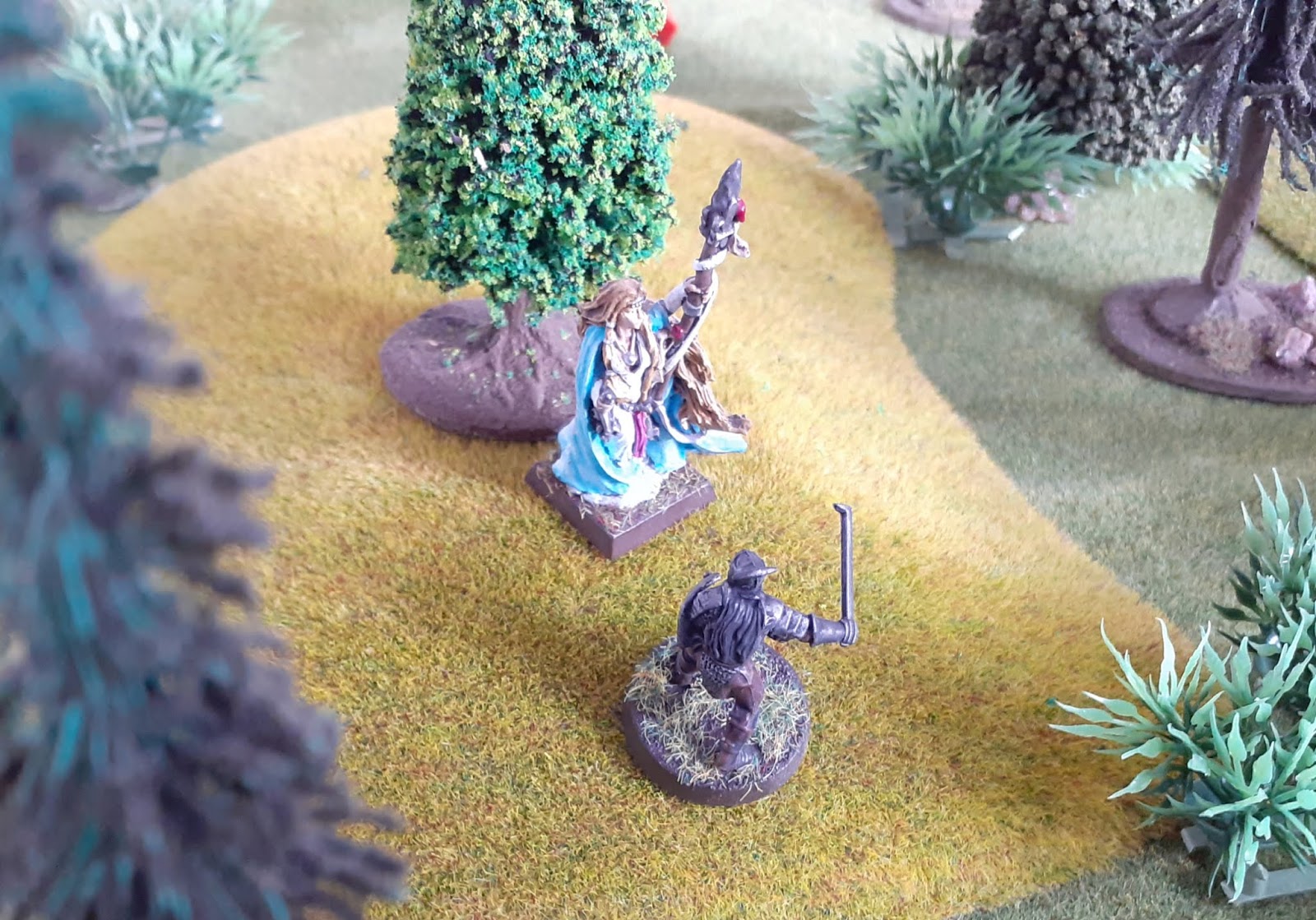 Meanwhile, Shevarith had finally got the better of her for, although the normally serene loremaster was battered and bruised. Nardol had bravely stood with her, but had succumbed to exhaustion and she kindly instructed him to take no further part in the fight. 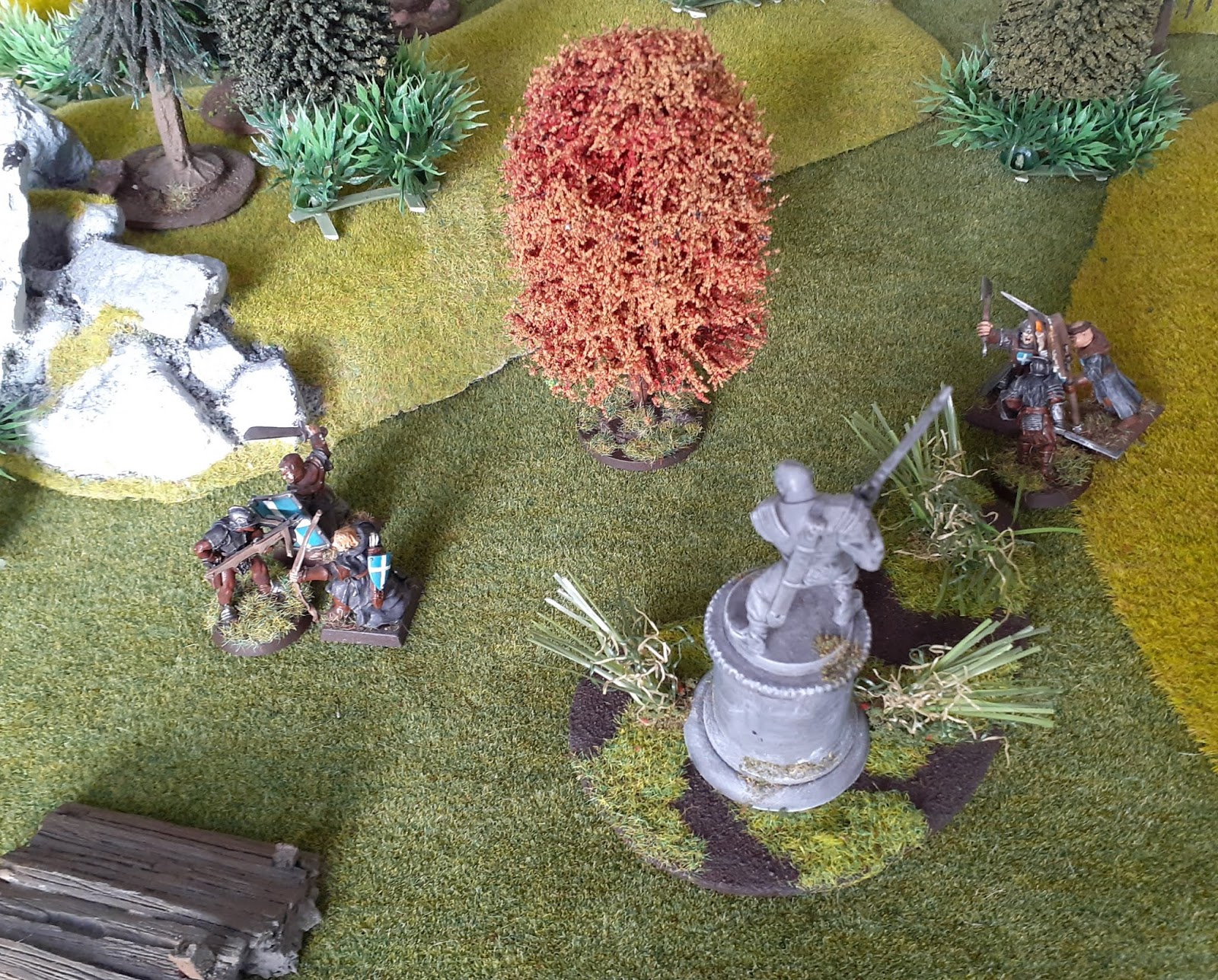 It was at this point that I too was taken out of the fight with a blow to the head as I sought to aid my master. The last thing I saw as my vision swirled was Garvin rushing forward to aid a beleaguered Toughton.

I was later told that the last hobgoblin fell to Venkh's axe, whilst Troughton and Garvin searched the enemy camp, finding a scroll that seemed to detail the enemy dispositions and a potion that Garvin dutifully passed to our master. 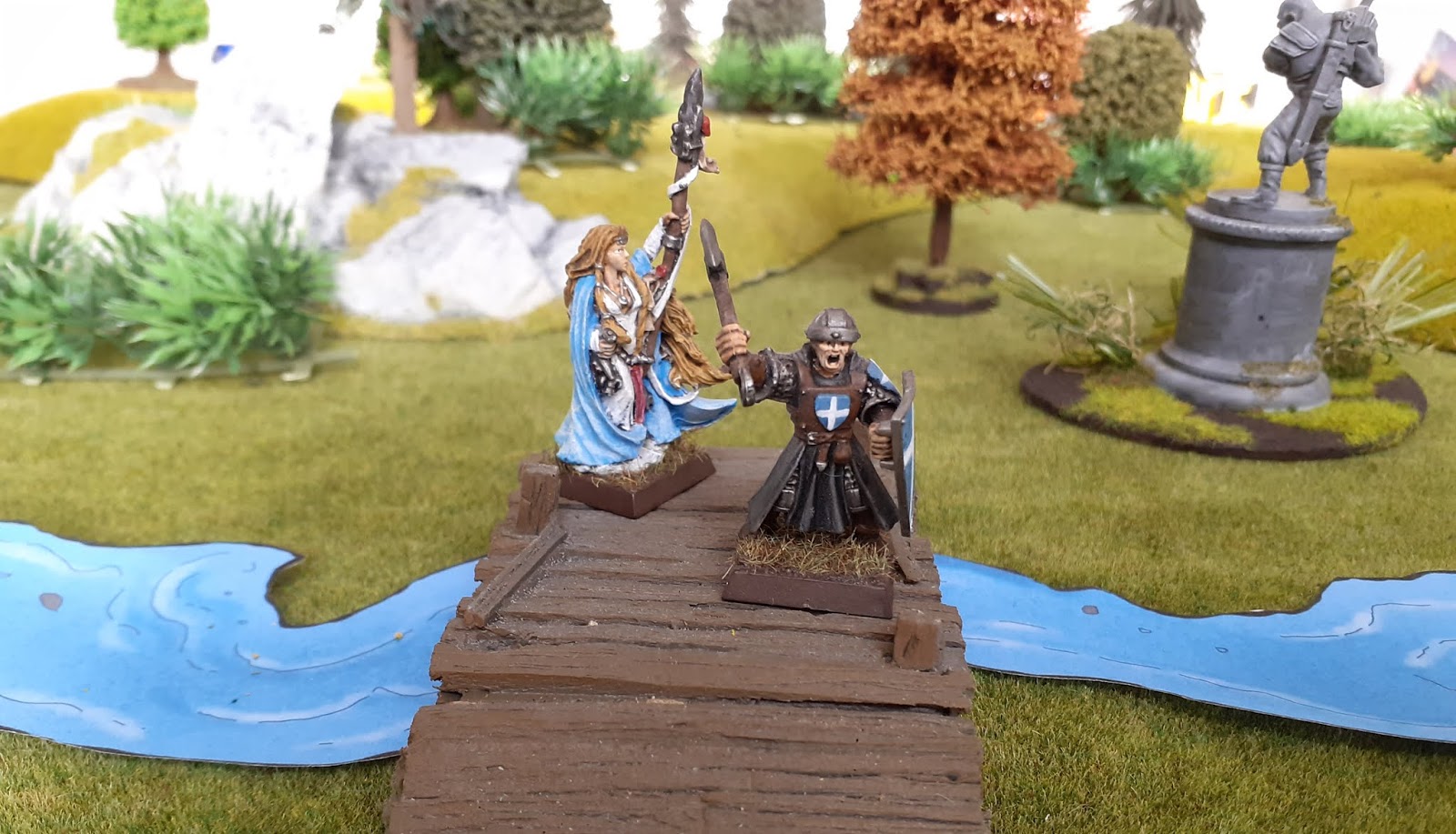 Although we emerged victorious from this fray, it could have turned out differently. Only Venkh and Garvin came out relatively unscathed, Lady Shevarith and Troughton were both worse for wear, Nardol and I had succumbed to our exertions and Wormtail was badly wounded.
We can only hope that this battle would be the worst that we might face, but sadly, I fear that this will not prove to be the case.
Posted by Kieron at 14:39