The Tower of Tor Varden 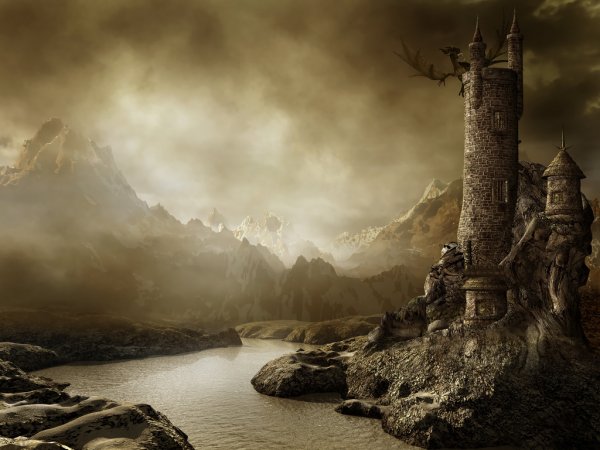 From the chronicles of Brother Rendall...
After the encounter at the bridge, my companions and I, with the aid of the scroll Garvin had found, were able to slip past a couple of other hobgoblin patrols and reach the imposing edifice of Tor Varden. There were no guards posted outside, and very little indication of anyone inside. Then a muffled scream came from somewhere in the tower. It was a sign both good and ill. There was at least one man alive in Tor Varden, but we might already be too late to save him. We would need to move fast. 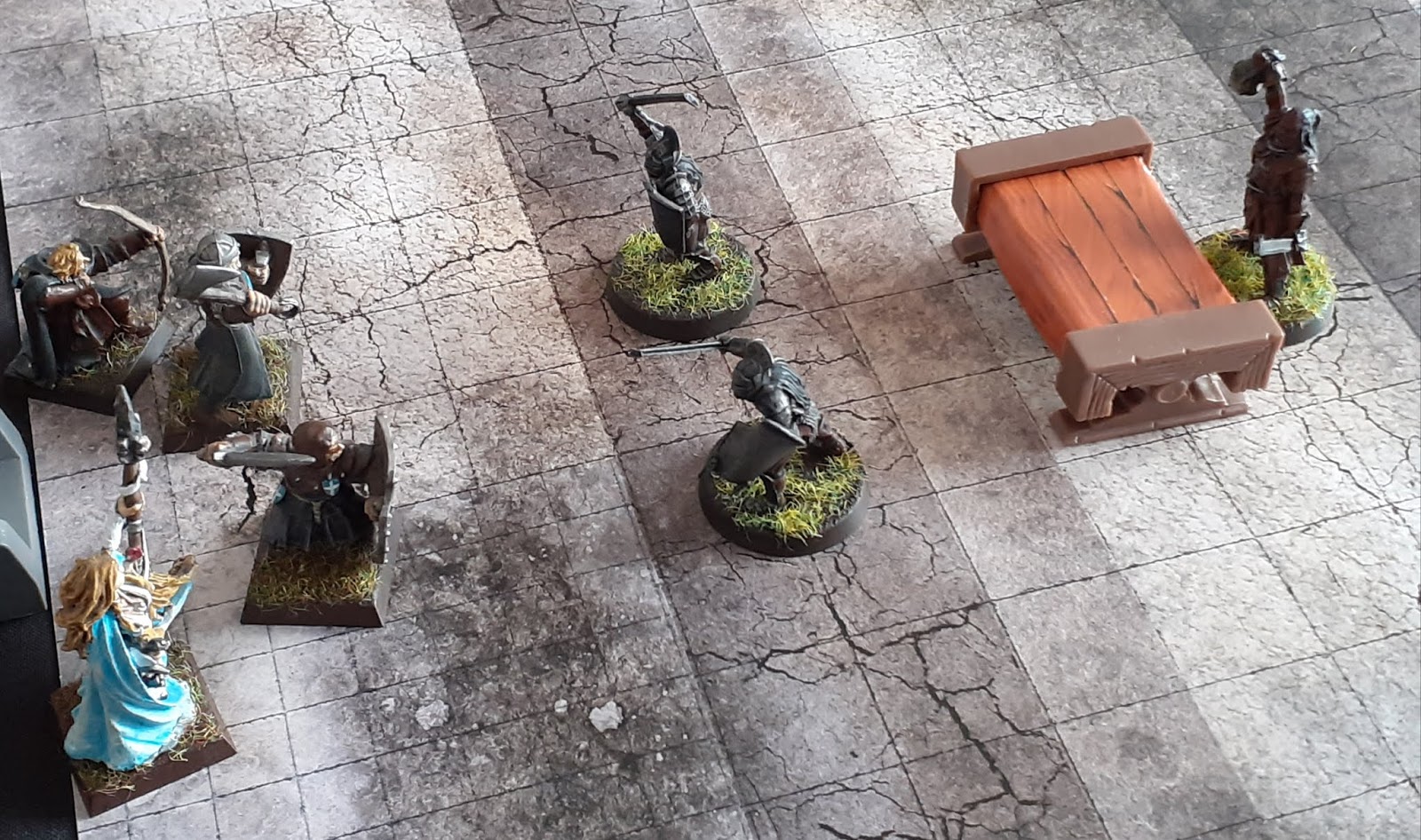 Wormtail's nefarious past proved useful to our goal, as he was able to silently pick the lock to the tower allowing Lord Venkh and Lady Shevarith to completely surprise the occupants of the tower.
The scene that greeted them was a gruesome one. Whatever the room once was, it had been completely transformed into a horrific workshop. The scattered furniture was covered in animal parts. In the centre of the room was a table, upon which lay a disgusting inanimate abberation, stitched together from the corpses of beasts and men. A hobgoblin shaman gibbered and muttered next to it, performing some foul and unholy rite. We could only presume he sought to infuse some sort of blasphemous half life into it. 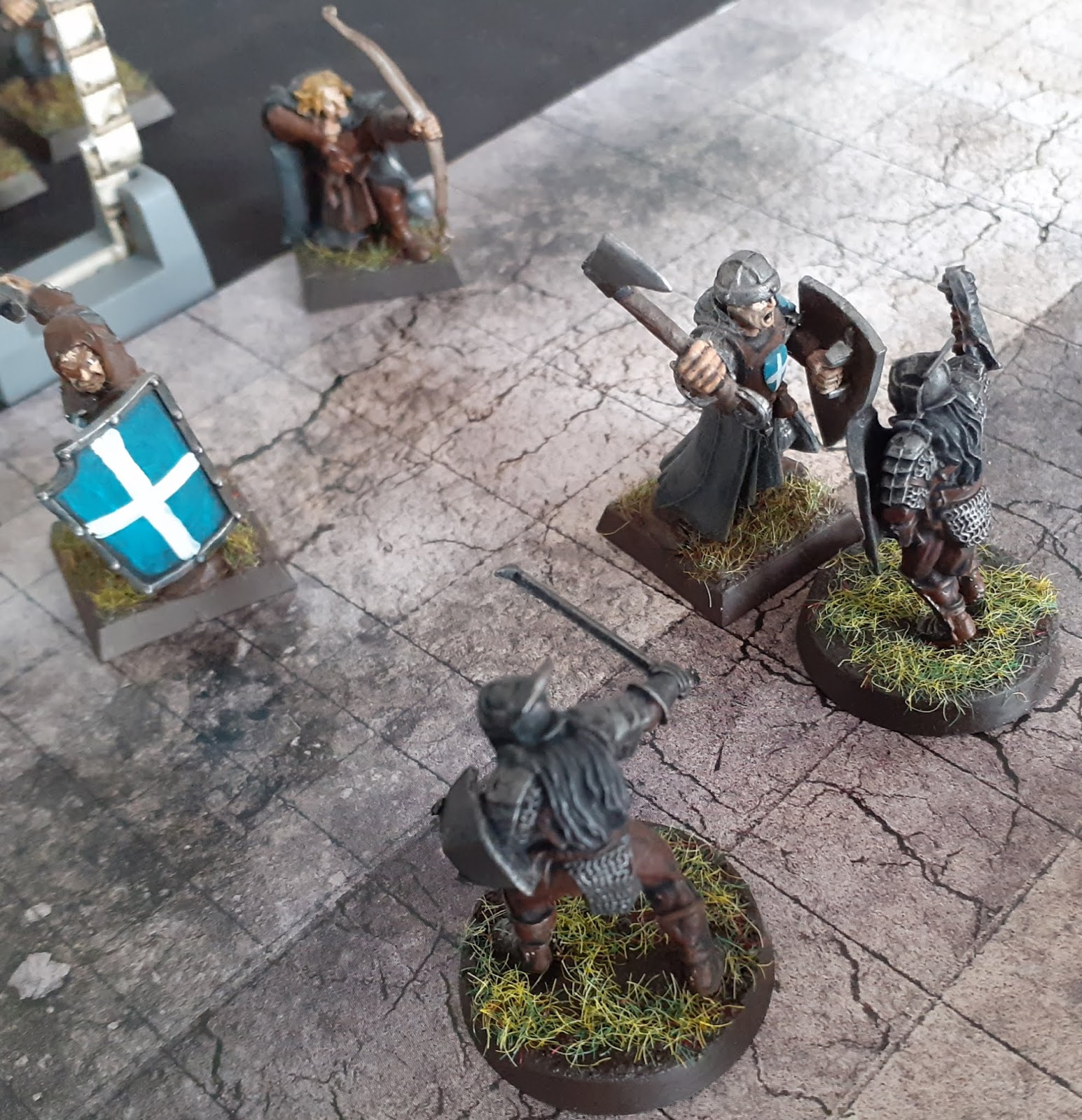 Knowing the rite needed to be stopped, my master burst into the room like a thunderbolt, striking one of the shaman's guards dead before it could even respond.
Troughton and Garvin combined to bring the other one down, but not before the doughty Troughton had taken a stinging blow to the head. 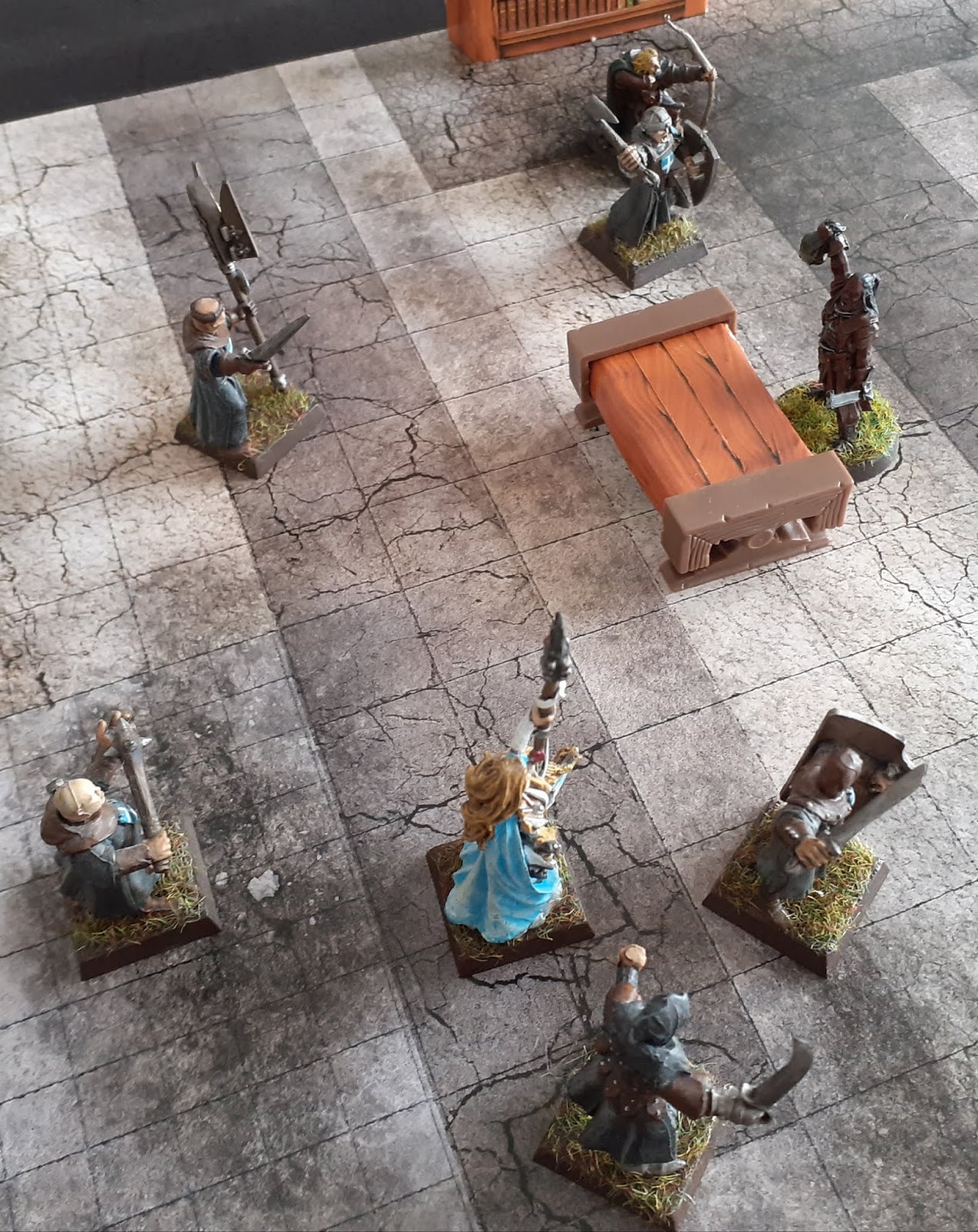 The rest of us swarmed into the room, desperate to prevent the ritual reaching completion. I could sense the dark energies coalescing above the stitched-together monstrosity. 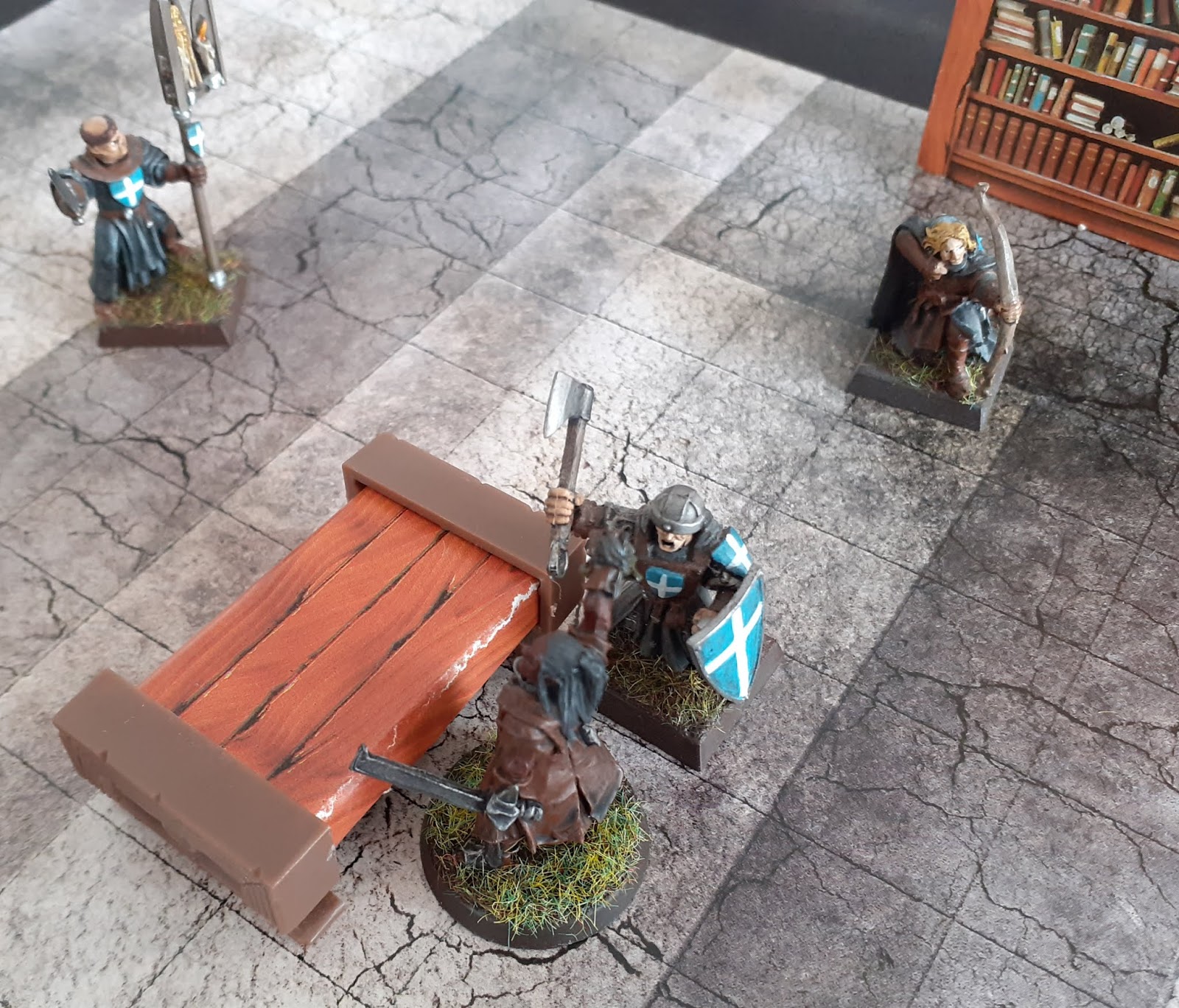 Just as the shaman's screams reached their feverish peak, he was silenced by a blow from my master's axe, and the foul corruption drained from the room. The ritual had been stopped. 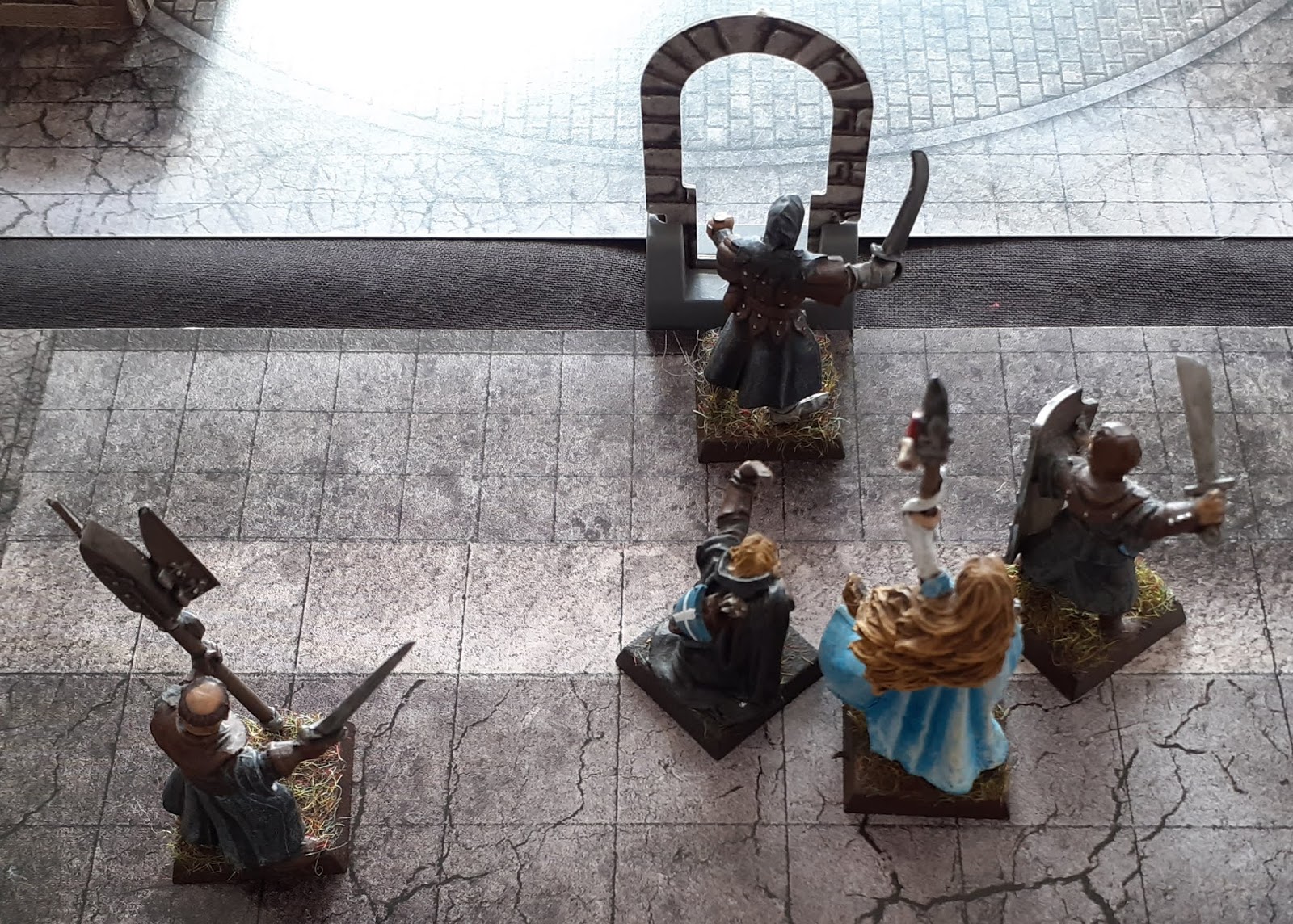 However, there was no time to rest on our laurels, as the rest of the tower was surely stirring at the sounds of battle.
Lady Shevarith ordered Wormtail to dart forward and scout out the next room. 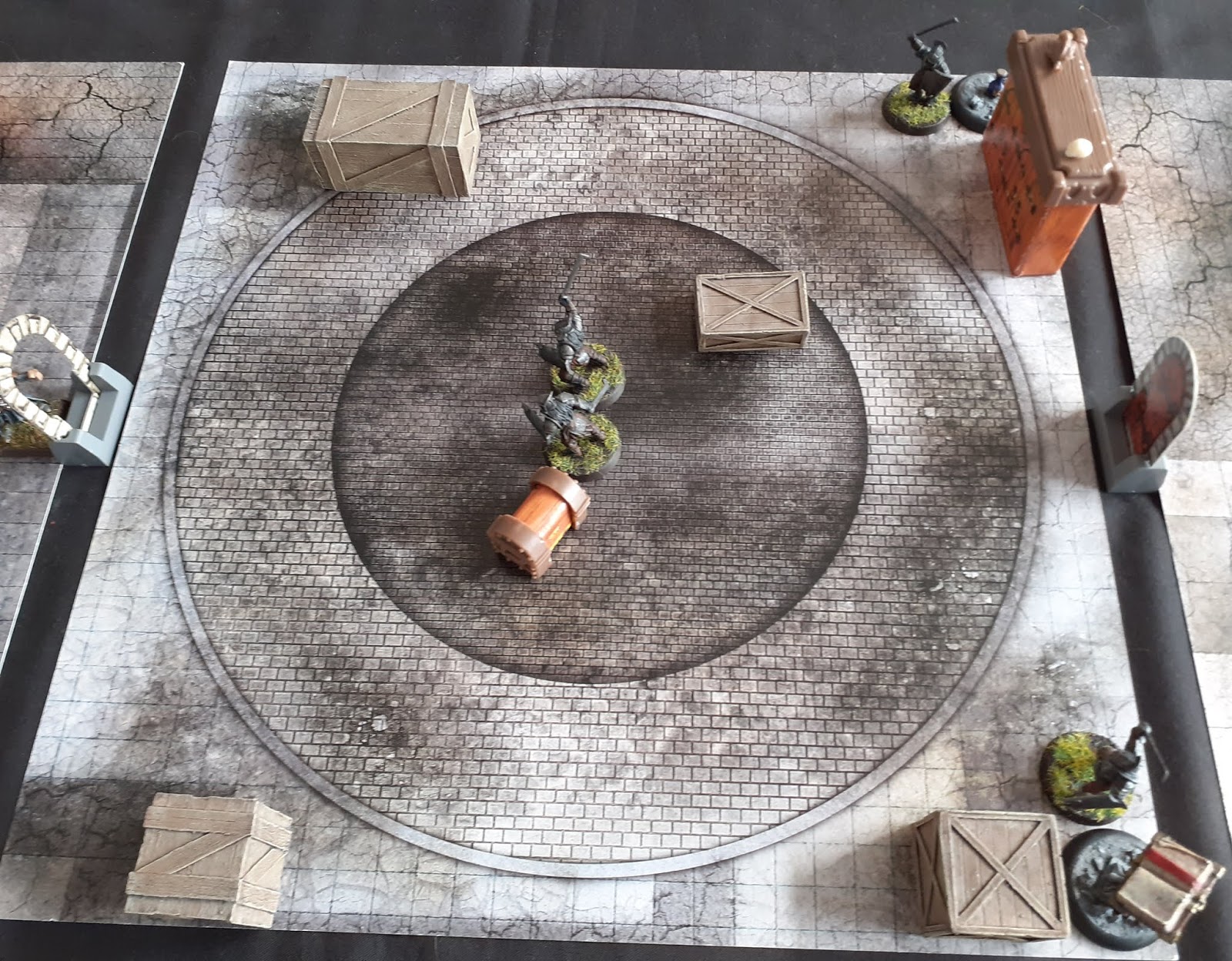 The door swung open to reveal some kind of storage room filled with boxes, barrels, crates, and hobgoblins! 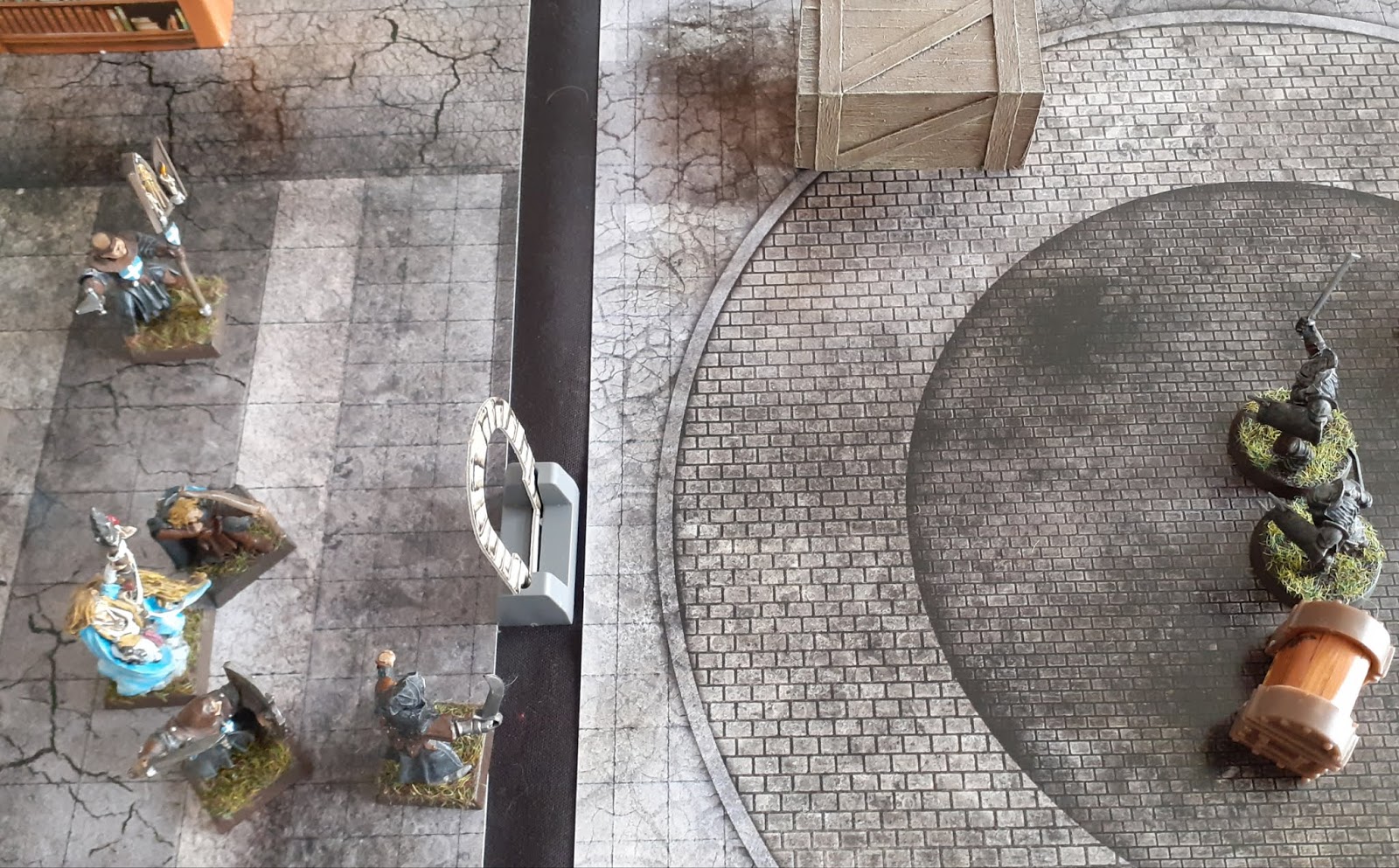 Wormtail quickly ducked to one side, allowing his mistress to send a stinging bolt of magical energy through the doorway, crumbling one of the sloping shapes within. 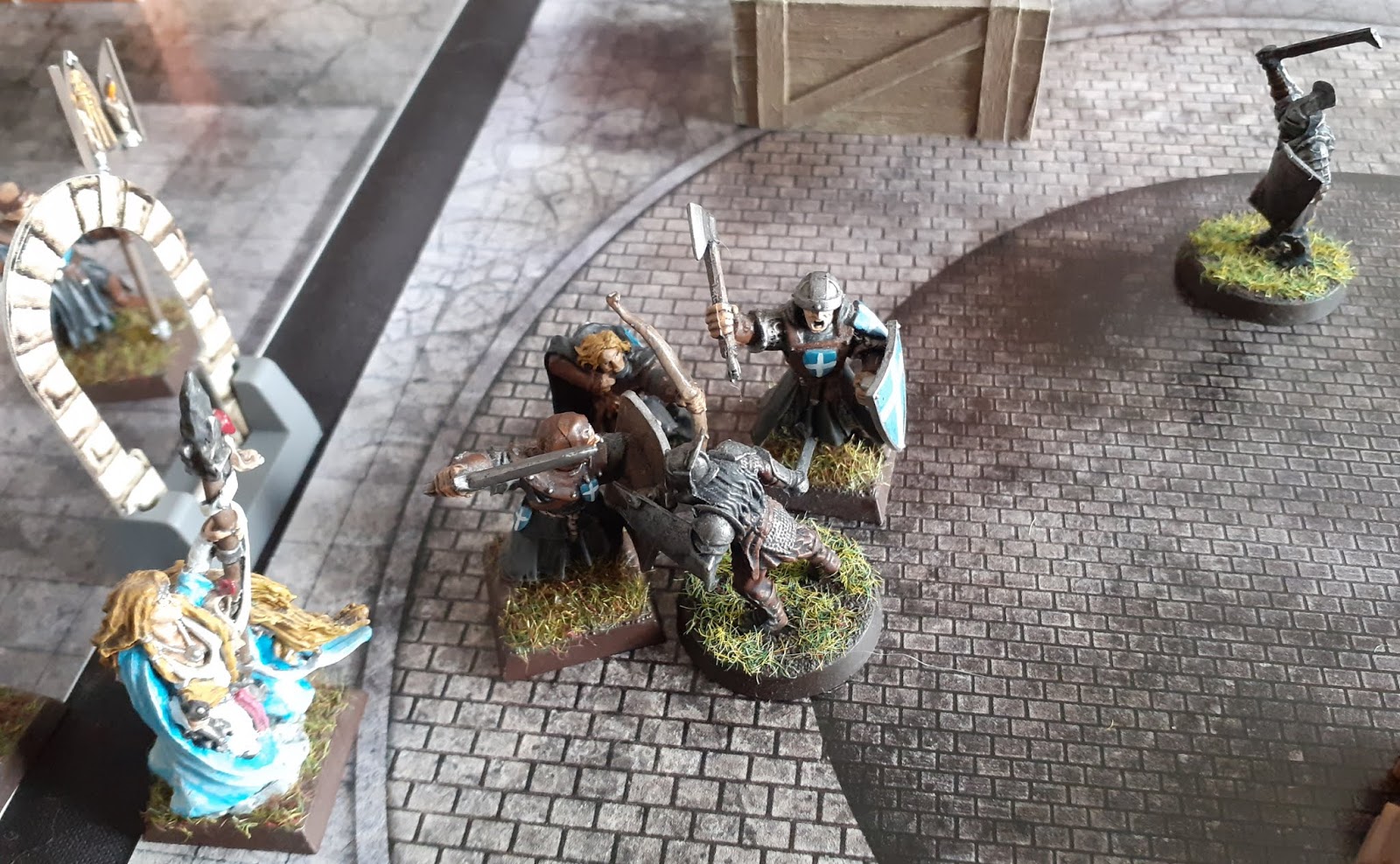 Again, Venkh, Garvin and Troughton surged forwards, surrounding and bringing down another of the foul creatures. However, through the door I saw yet more rushing towards my master's unguarded back 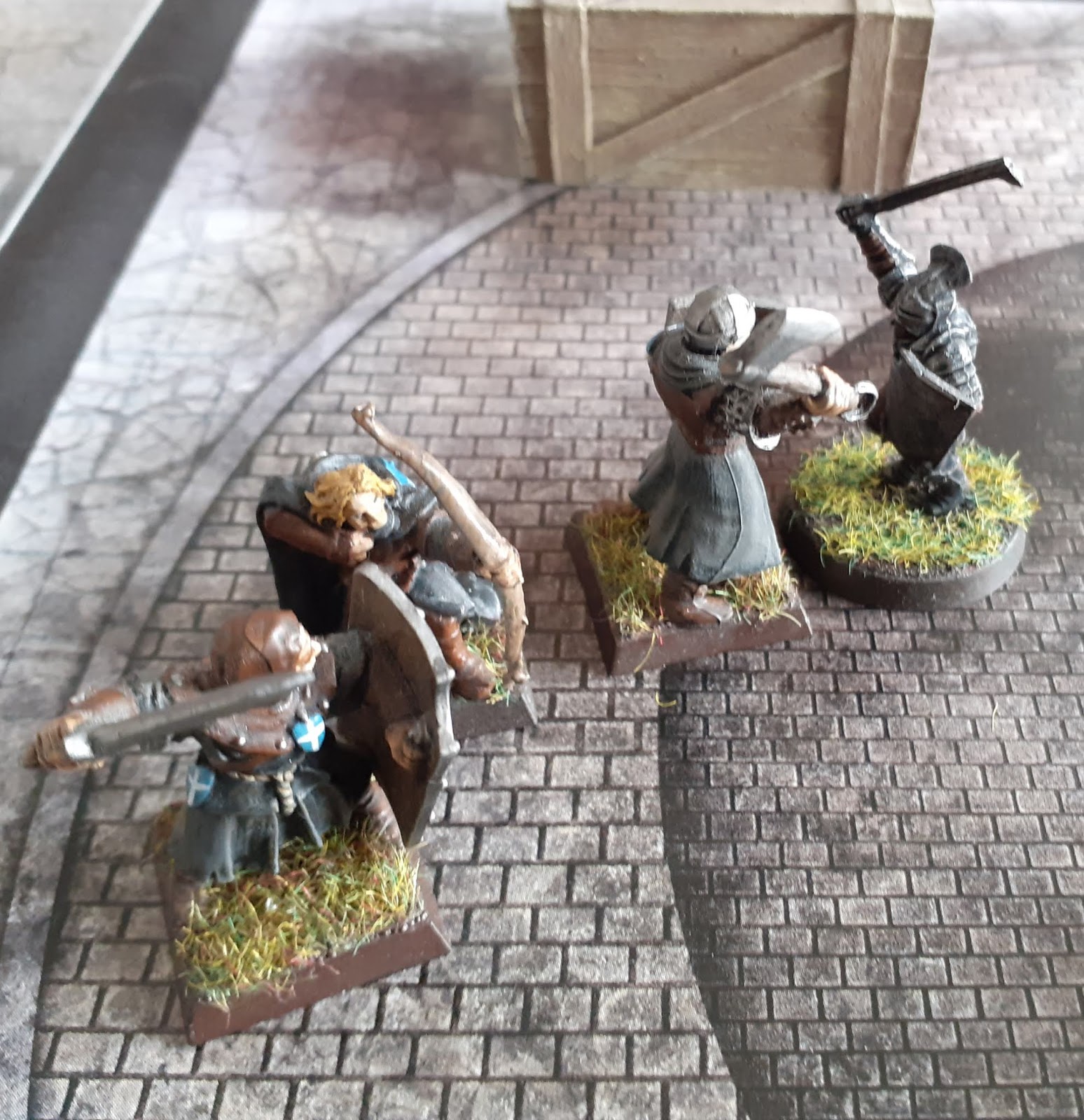 I should not have worried. He spun round with lightning speed, bringing his mighty axe up in a fluid motion which caught the charging creature under the chin an split its head clean in two. 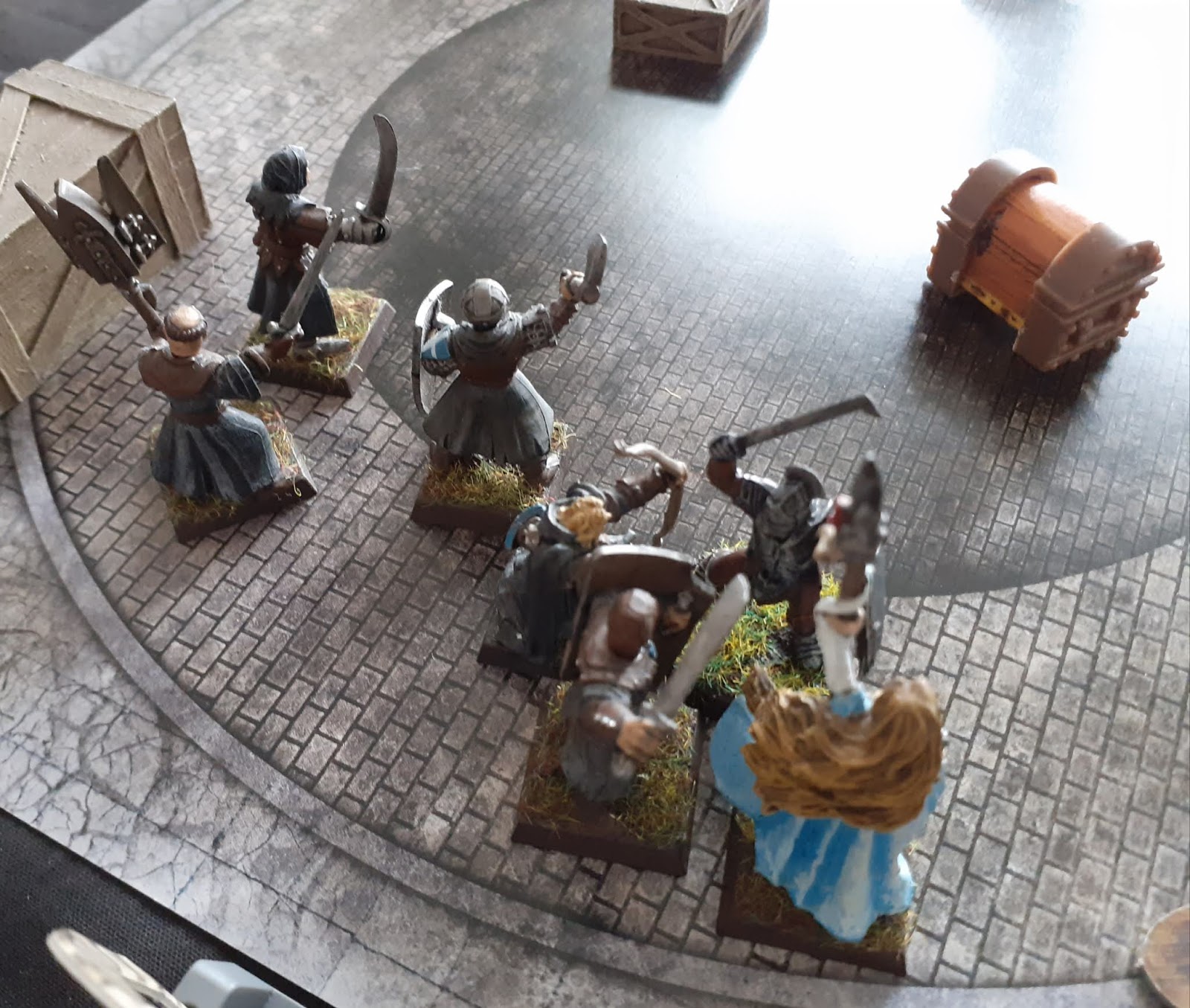 Shevarith lead the attack on the final creature in the room, bringing it down with a rain of blows, whilst the rest of us searched the room for clues as to what had happened here. 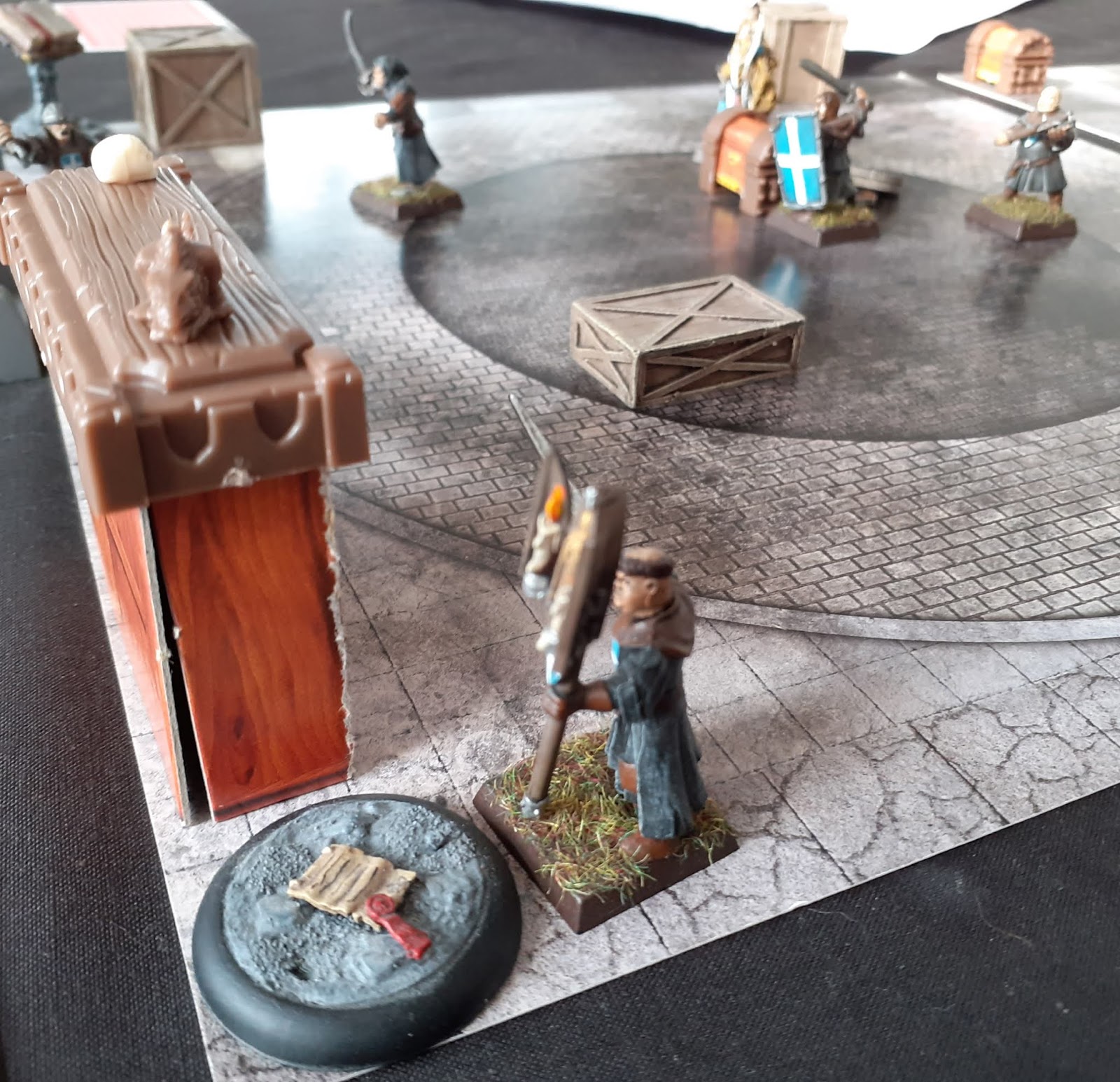 I found a scrawled note which seemed to be the feverish ramblings of a mad man, raving about the 'coming of the shadow knight'. I took no note of them and returned to our mission. Wormtail was more fortunate, however, locating an enchanted philtre of fairy dust and passing it to his arcane mistress who would doubtless know how to make good use of it. 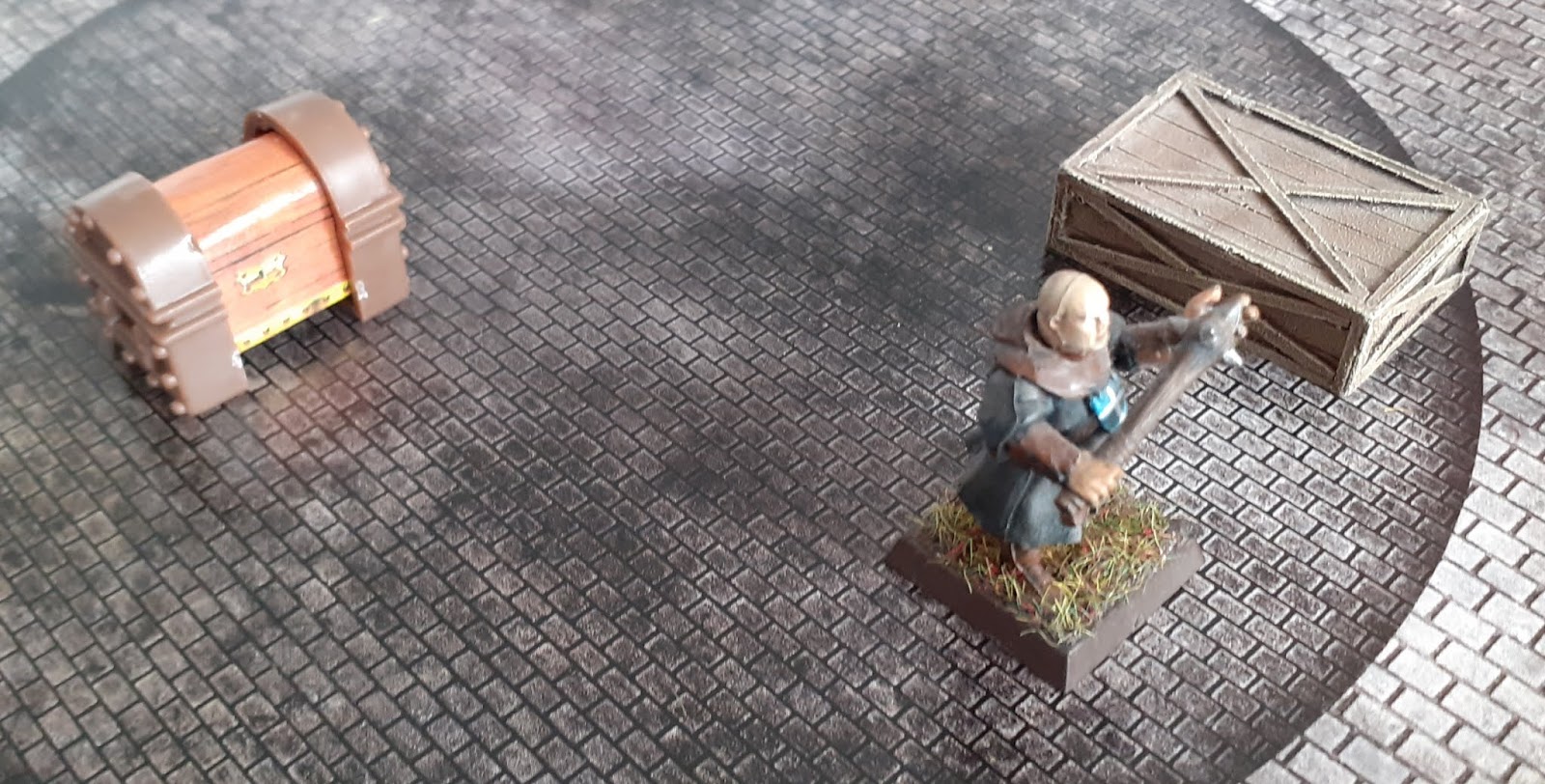 Poor old Nardol was struggling to keep up with our hectic progress, and puffed along behind us through the tower. 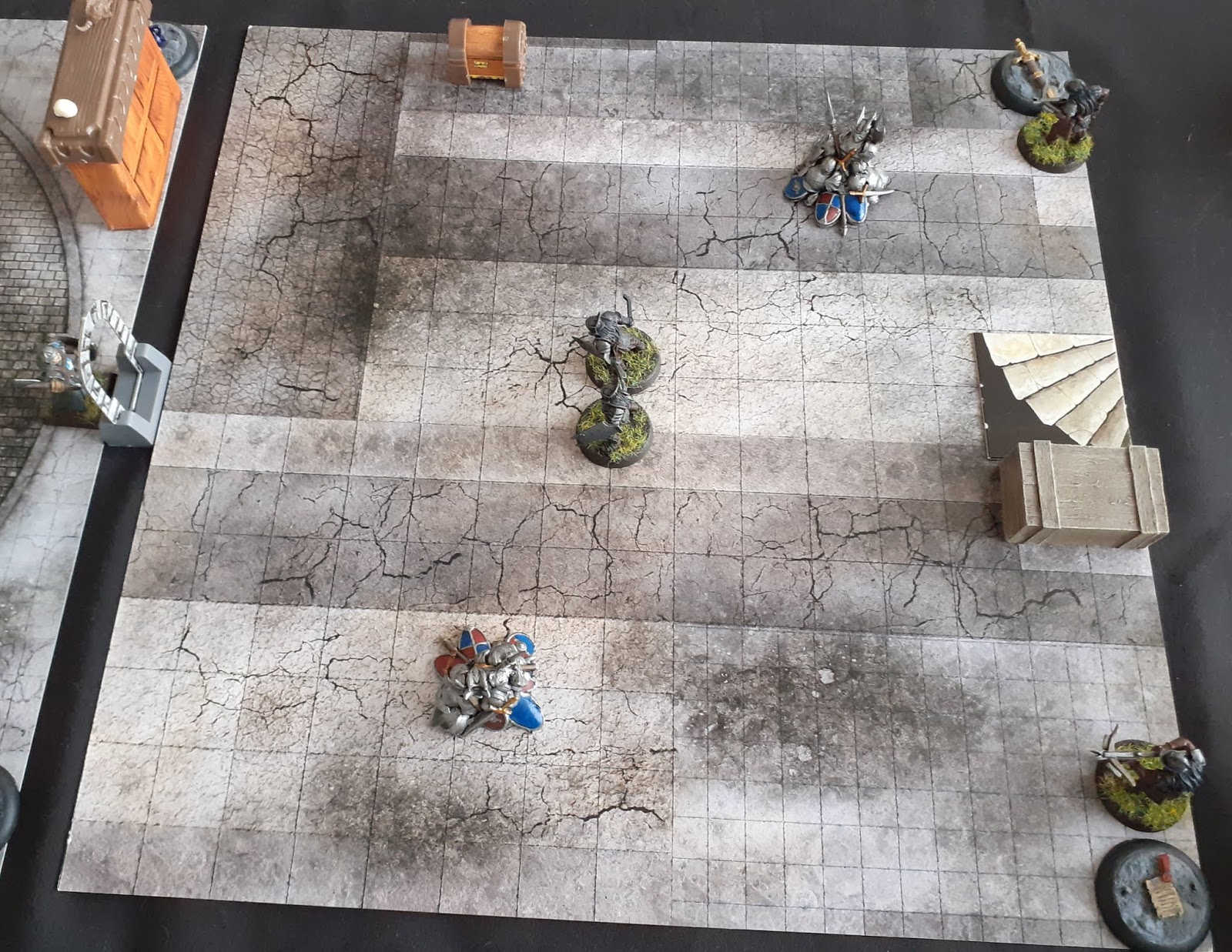 Eager to press on, my lord opened the door to the next chamber, revealing what must have been the tower's armoury, as the walls were lined with racks of weapons and armour.
To our dismay, four hobgoblin had availed themselves of these weapons and stood between us and the upper levels. 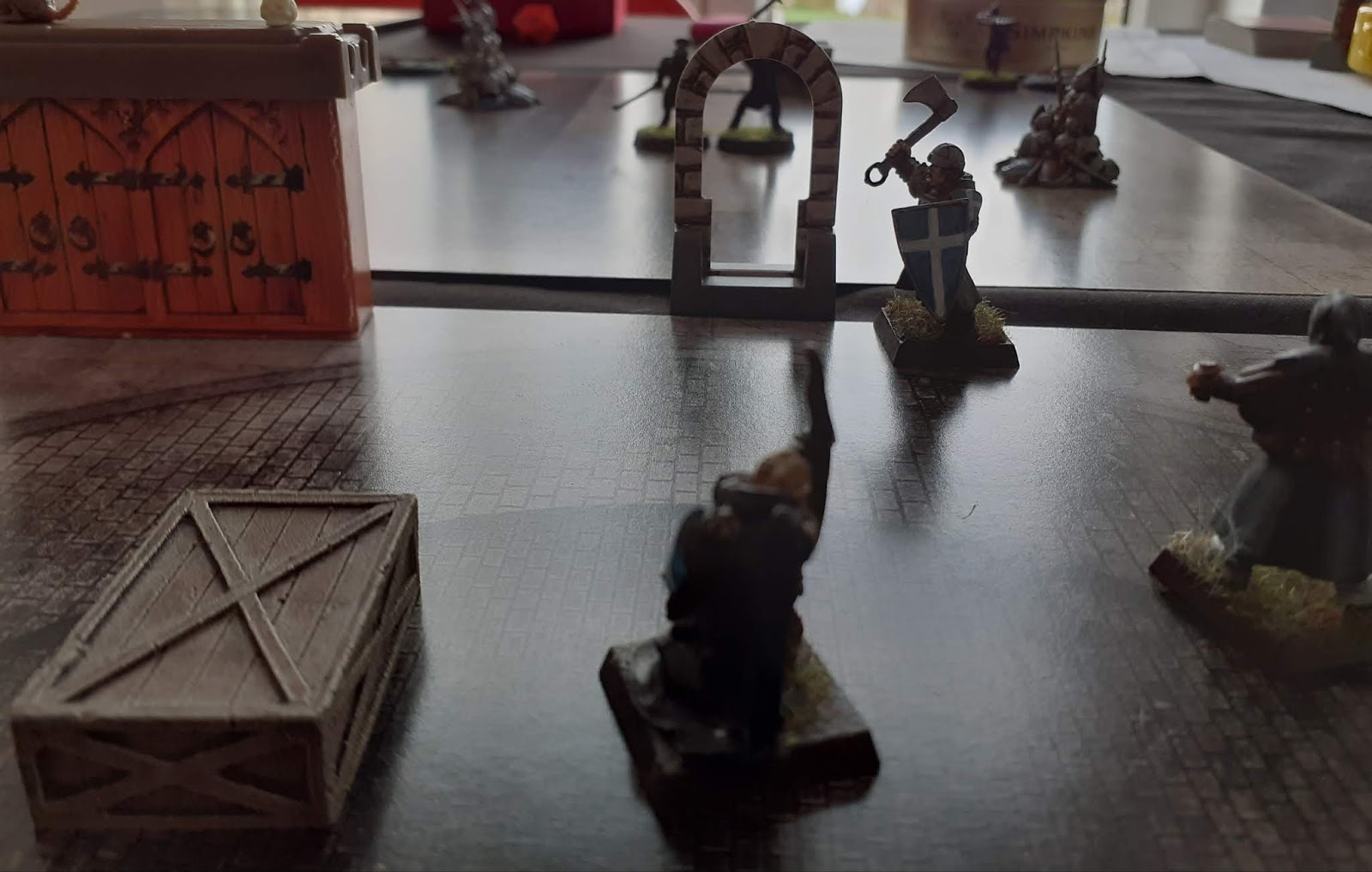 Seemingly having learnt something from the way Shevarith and Wormtail worked together, Master Venkh uncharacteristically stood to one side to allow Garvin to let fly an arrow through the doorway. Has aim was true and there was a gurgling yelp from a hobgoblin that was taken through the throat. 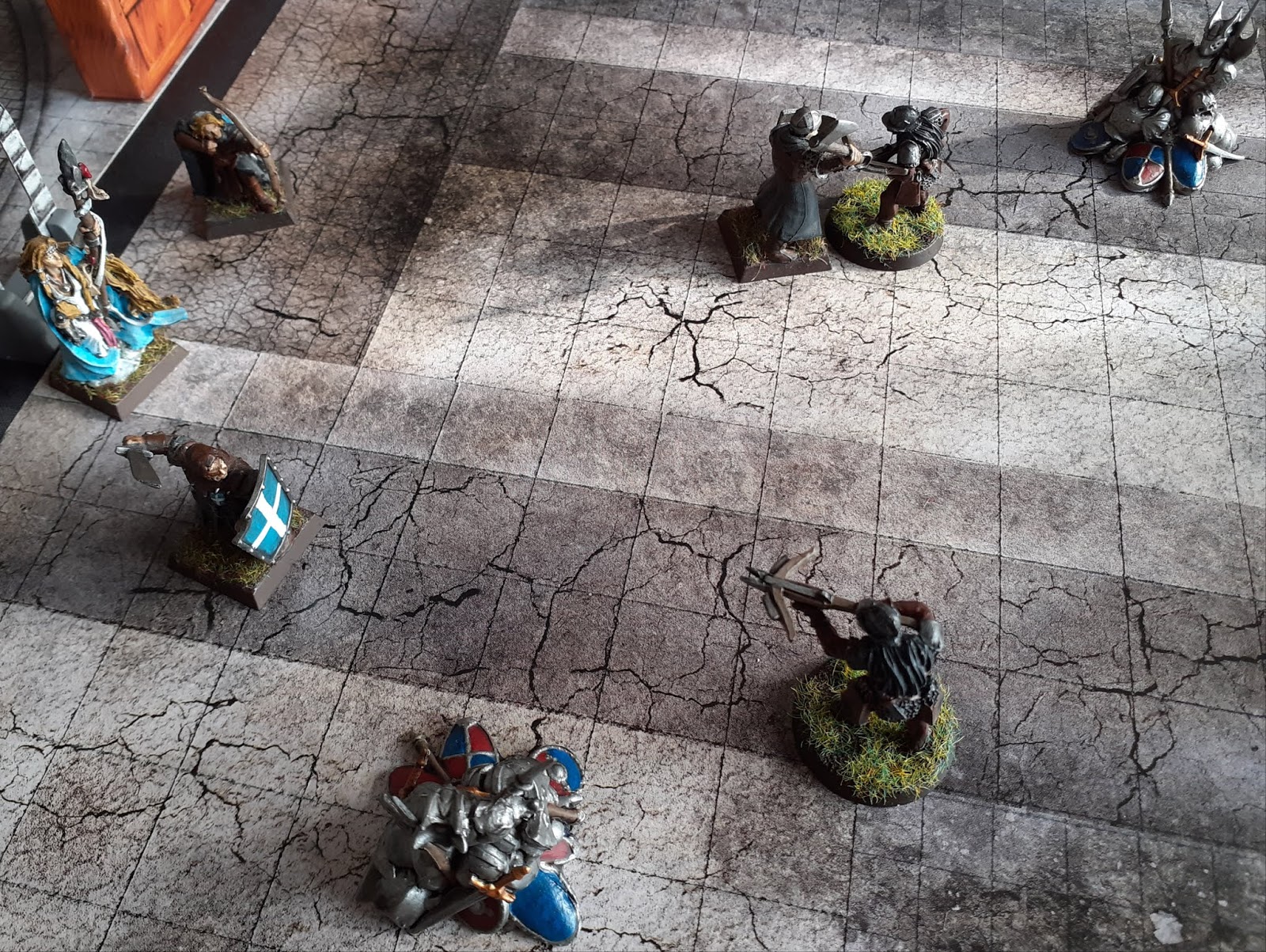 Then my lord's impetuous nature took over, trampling over one creature that sought to bar the doorway and barrelling on, ignoring barbed arrows flying towards him and ploughing into one of the archers, dropping it swiftly with furious hacks. 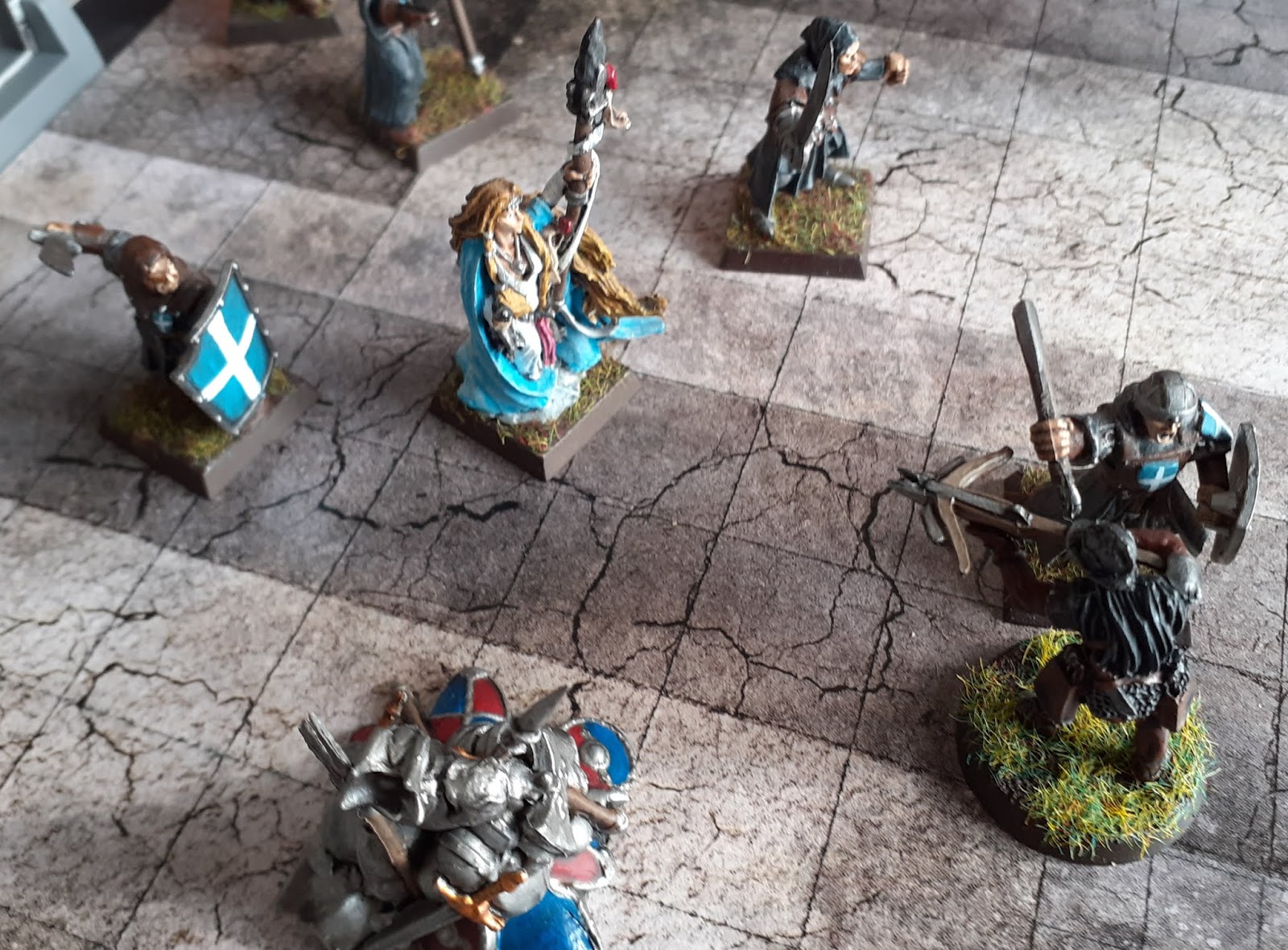 He then charged the last of the creatures, like a man possessed, but met his match in fury, as the desperate hobgoblin hacked back at him beating my lord back. 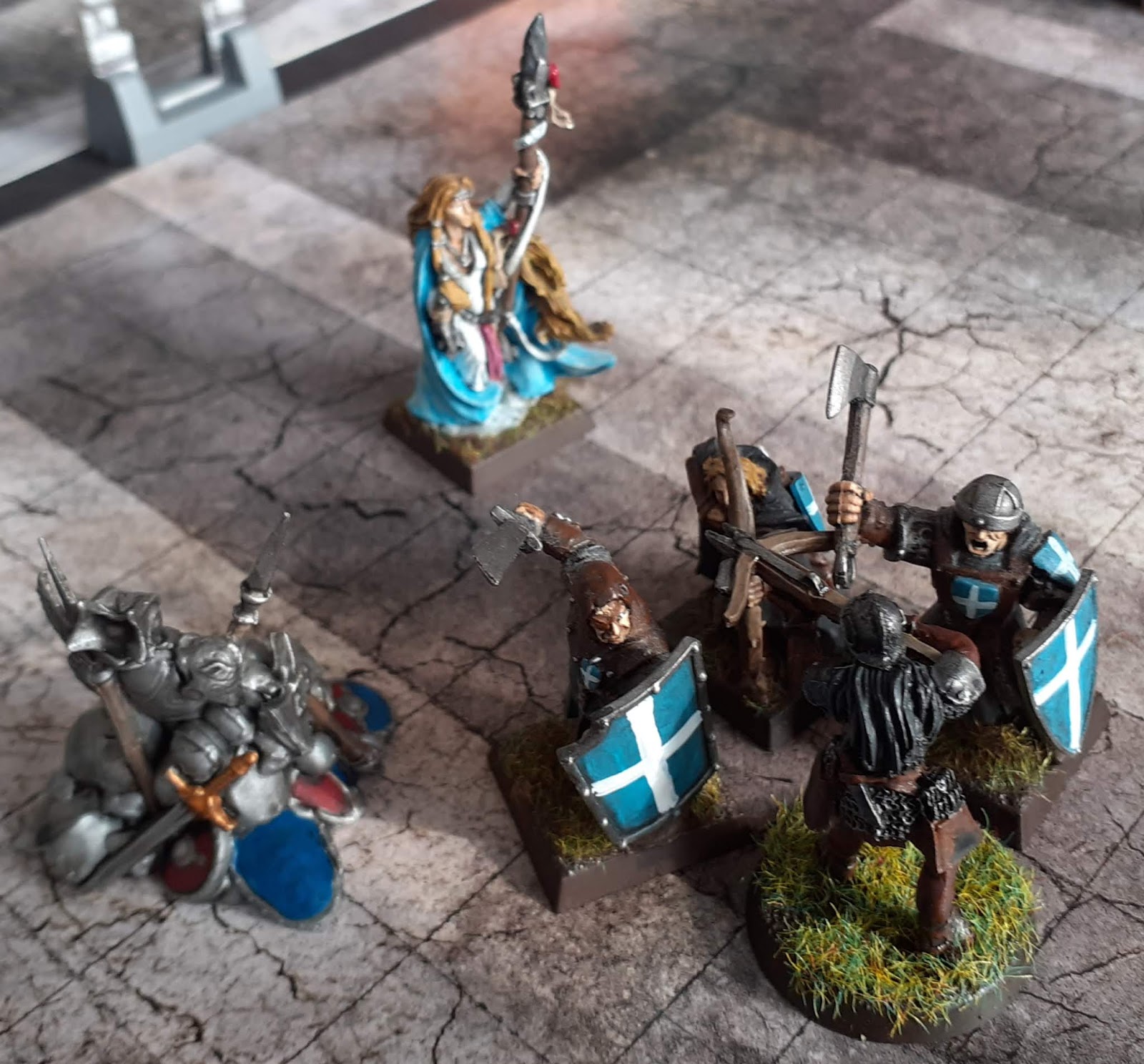 He was joined by Garvin and Troughton, but I have never seen such a furious defence as the hobgoblin put up. Clearly tiring from the wound he had taken earlier, Troughton was sent crashing into a pile of armour and lay still. Fortunately just unconscious. 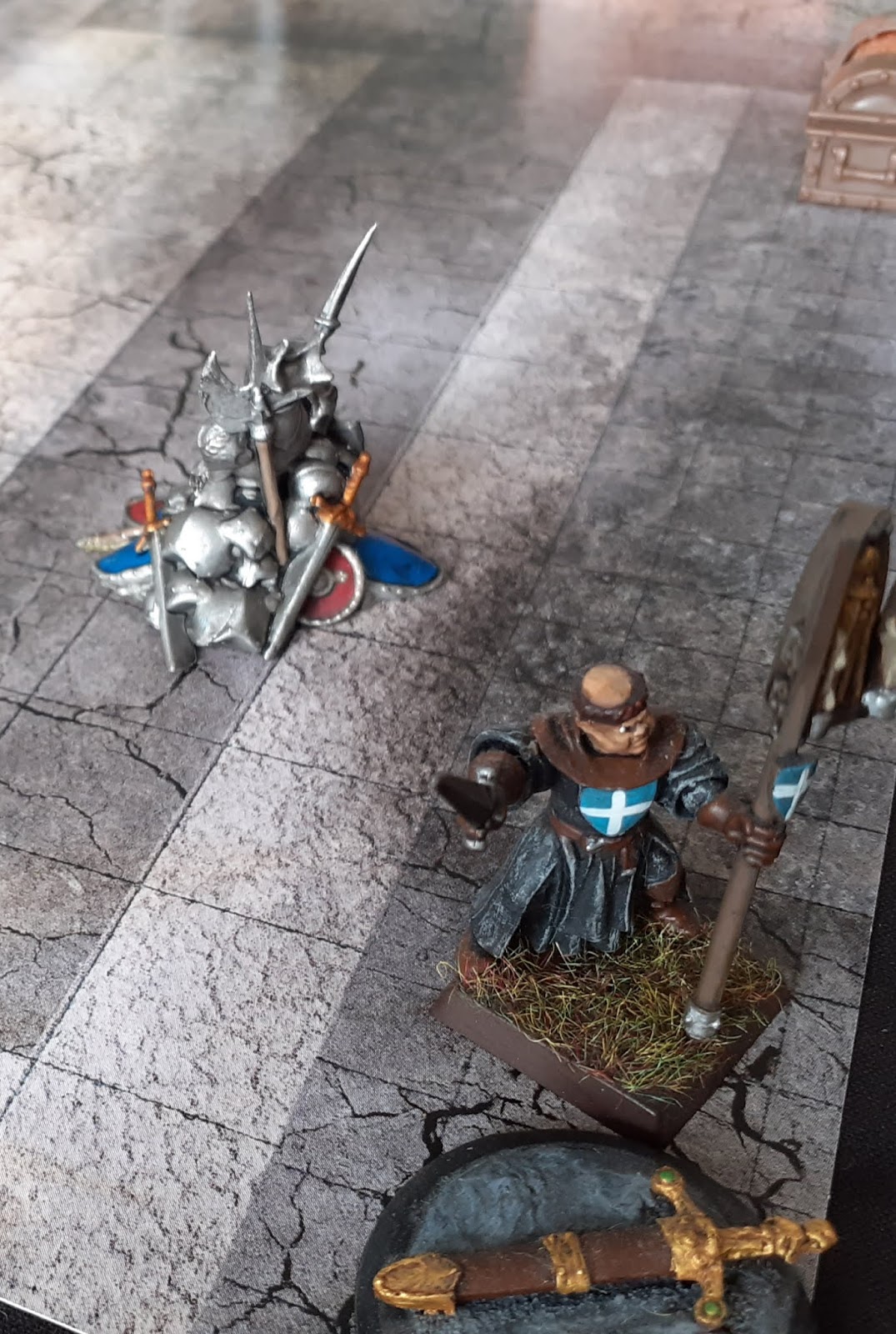 Whilst this was happening, I was searching the room (I had assumed that there was no way a single hobgoblin could best my master and two companions). However, beneath a sword I found some fury leaves, the presence of which might go a long way to explain the desperate battle unfolding behind me. 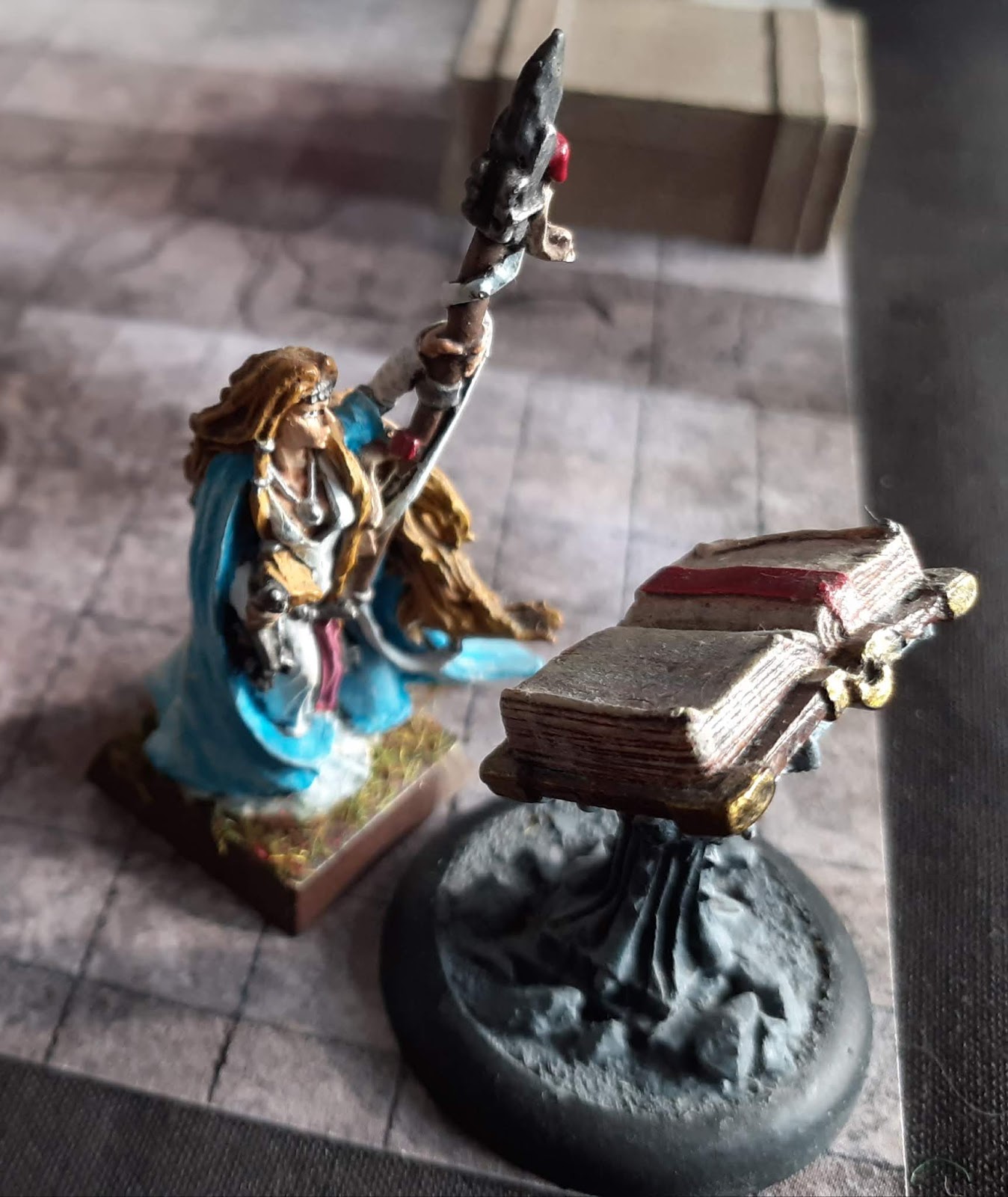 Lady Shevarith has similarly assumed that the hobgoblin would be no match for Lord Venkh and had laid her hands on the tower captain's log, an item which would be of great value should we return to safety. 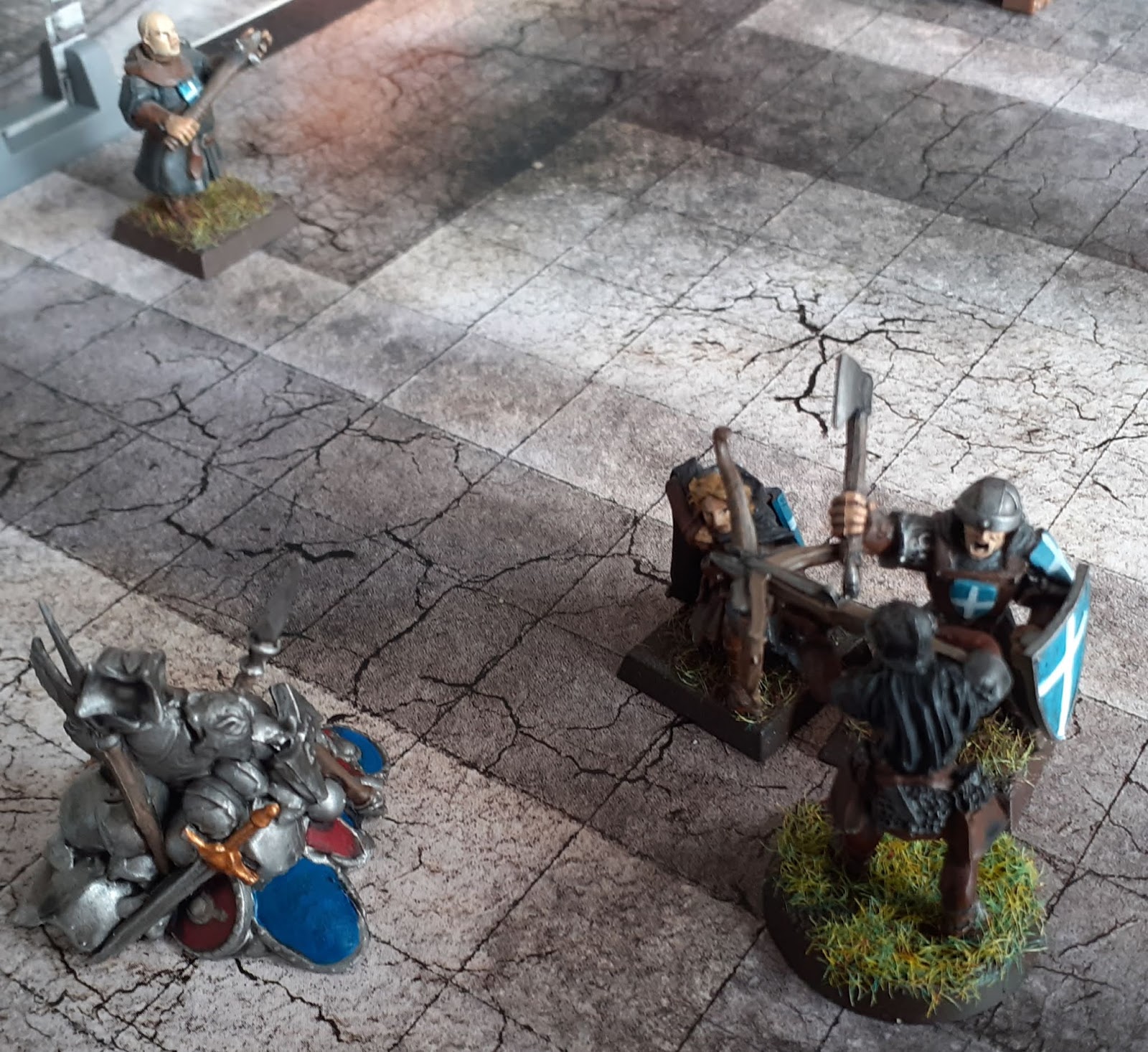 With Shevarith and I otherwise engaged, Wormtail watching the stairs fir attack from above, and Nardol lagging behind, it was left to my master and Garvin to finish off the frenzied hobgoblin.
I thought at one point that my master had fallen, but he had simply rolled with the enemy's blow. I uttered an incarnation of healing to aid him in his struggle and he seemed reinvigorated, clambering to his feet and finally cutting down his berserk opponent.
Pausing only to catch our breaths, patch our wounds, wake poor Troyghton, and wait for Nardol to catch up, we began to ascend the stairs to the beacon...
Posted by Kieron at 11:19