It's not all peasants with pitchforks!

I feel like it's been ages since I last updated, but it's only been a week. Unforeseen circumstances meant that I didn't get a game this week, which was disappointing as it was meant to be the Bretonnians first outing. In fact, the game I never played was the reason I've been so long between posts, as I was working on a bunch of things at the same time to get them ready. I've made a promise to myself to not field unpainted miniatures again, so I worked to get everything in the 1200 point army as close to finished by Thursday as possible, and had succeeded in getting everything done bar transfers. However, because nothing was actually finished, I wasn't able to post an update.

Anyhow, that's now sorted. Transfers are done and it's time for a mid-month update!!! 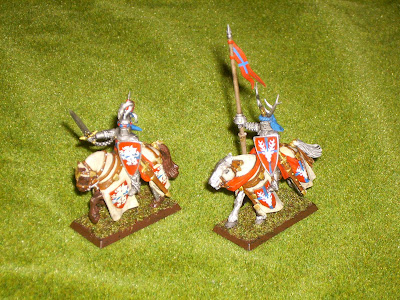 Firstly two Knights of the Realm. A Champion and a Knight bring the unit up to 8, which with the addition of the Battle Standard Bearer who I'll be finishing this week, turns the Knights unit into a pretty decent hammer unit. It also marks the switch from Peasant Rabble to Chivalrous Host that will take place over the next couple of months. 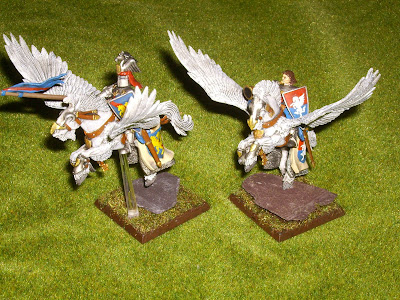 Next, two more Pegasus Knights to create a unit. I've tried to model the unit as if it has just taken off, which is why the Champion's Pegasus is flying whilst the others still have feet on the ground. They're a bit of a bugger to rank up in combat, but I'm really pleased with how they look in skirmish order. This unit is the army's response to war machines. 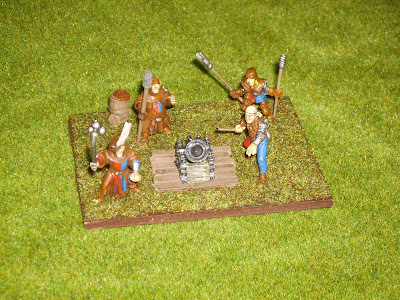 Speaking of war machines...what's this? A mortar? In a Bretonnian army?

Well, yes..but no. Actually it's my 'counts as' trebuchet and it's as close to the most perfect example of Cheaphammer as you're likely to encounter:
There you go. The only issues this kind of creativity will create is that there are those (LOS Fascists!) who will complain that the model isn't big enough. However, the base is large enough to mean that I'm gaining no particular protection from templates, and I'm happy to allow people to draw line of sight to 10cm above the model, so where's the problem?

Fluff-monkeys might point out that Bretonnia doesn't use gunpowder. However, I'd point out that not only is this army based in Couronne which sits next door to Marienburg and so surely some of the nobles have dabbled, but also in Warhammer Armies from 3rd edition, Bretonnia did use cannons and handguns, so there is a precident! So, nerrr...

I do intend to get some actual trebuchets into the army at some point as I like the look of them, however, the mortar will serve more than adequately for the time being.

Looks like I'm on track to meet my target this month. Just the BSB's banner and transfers to go, and then I've got something BIG planned for the end of the month.
Posted by Kieron at 13:55