Well, I've finally managed to get a game of the Batman Miniatures Game. I'll present this as a battle report rather than a review initially, and then sum up my thoughts about the game itself at the end.

For simplicity's sake Matt and I decided to play the game without the variables of objectives, street lights, sewer entrances and strategies. We rolled up the Patrol scenario in which both sides are trying to get to the opposite corner of the board from their deployment zone. Our gangs had the unusual reputation of about 180.

Matt was using his SWAT miniatures from his own Flashbang game as Commissioner Gordon (in the suit with the pistol) and Officers Alpha (MG), Bravo (Sniper Rifle/Shotgun) and Delta (Hand Gun & Invisible Riot Shield). He also used his available funds to equip provide flash-lights and handcuffs to his men.

As Matt was running cops, I broke out the Joker, his main squeeze Harley Quinn and the only henchman in town, Two-Gun Turk. As the rulebook was particularly confusing on the additional equipment for Joker's gang, I simply bought more ammo for Turk. I also used Joker's Kaos Agent rule to reduce the game from the standard 6 turns to five, putting the pressure on both sides to get moving. 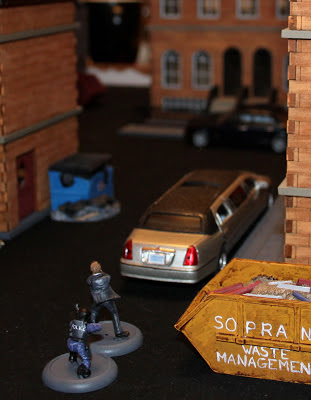 Aware that the Joker is on the loose, Gordon and Bravo move carefully through the poorly lit (no street lights, remember?) streets. 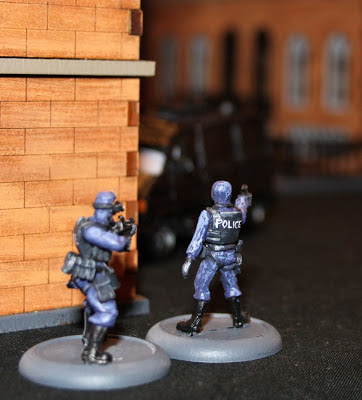 Further down the block, Delta and Alpha move up in support, keeping their eyes peeled for the Clown Prince of Crime. 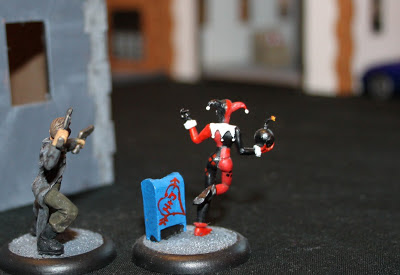 Meanwhile, Harley Quinn and Turk make a run to across the street on another absurd errand for the Giggling Godfather... 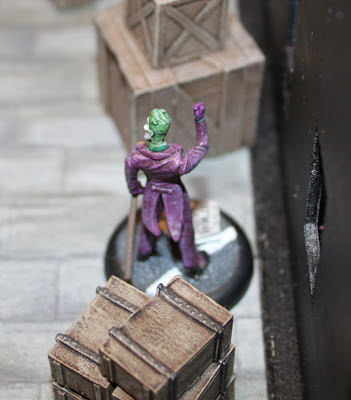 ...who waits in his warehouse lair, laughing maniacally, as he is wont to do. 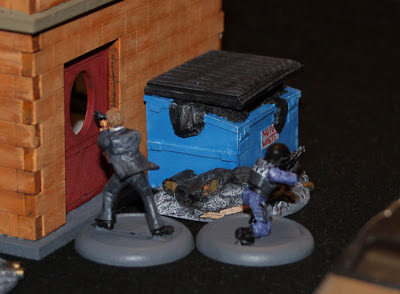 The police continue to carefully search the buildings and alleyways for the dangerous fugitive. 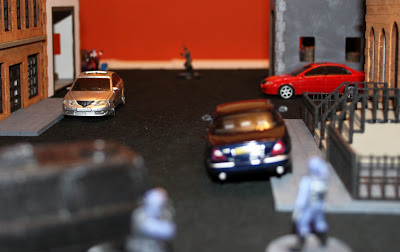 Suddenly, a high pitched giggle and flash of red and white draw the cops attention down the darkened street. 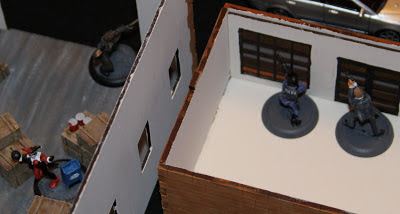 Harley and Turk dive into the cover of a warehouse, whilst next door Gordon and Bravo are distracted by a chattering sound; their eyes are drawn to the curious sight of some clockwork teeth slowly making their way across the road towards them...BOOOOOM! 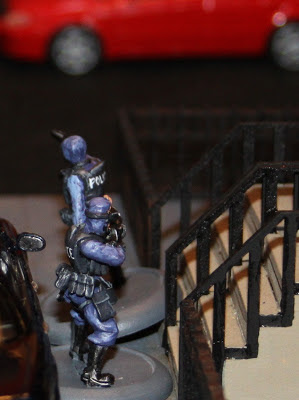 The windows of the building are blown inwards, showering the cops with glass, injuring Bravo. Alpha and Delta run up towards the sound of the blast on the other side of the street. 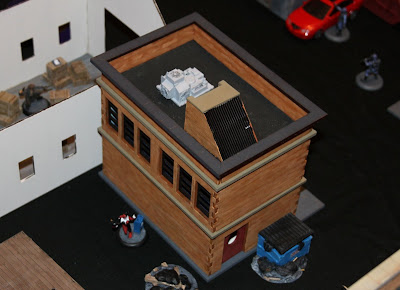 With the cops distracted, Harley slips through a window and makes a run for it whilst Turk lies in wait the ambush the flatfoots. 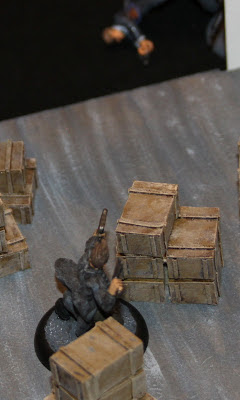 Gordon staggers out of the smoke and into the doorway of the warehouse and a furious but ineffectual fire fight ensues as he and Turk blaze away at each other, mainly splintering wood (it turns out that we were playing the Blink! rules wrong and so cover was far too effective. Suddenly, a booming shot rings out from the warehouse across the street and Gordon crumples to the floor wrapped in multi-coloured streamers (Joker's one shot gun should actually have taken him out of the game on a critical, but again, we played it wrong and just had Gordon incapacitated). 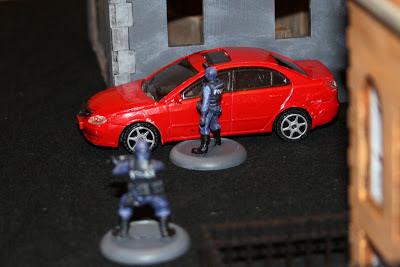 The cops rush to where the shot came from, hoping to corner the assassin. 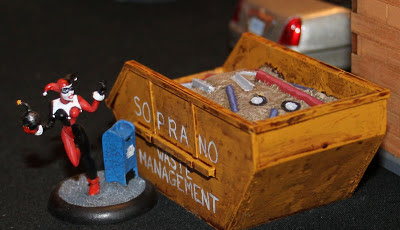 Meanwhile, on the other side of town, Harley Quinn finally reaches to Joker's real target and stashes a small, but highly explosive device in a skip owned by an important player in Gotham's underworld, the detonation of which at an opportune moment is likely to cause chaos. 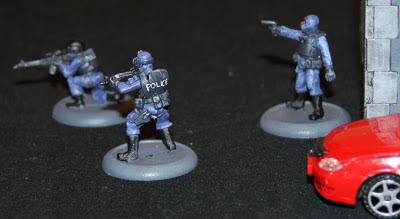 The cops continue to hunt Gordon's assailant and stumble upon the Joker's hideout. Can they apprehend the Clown Prince of Crime? 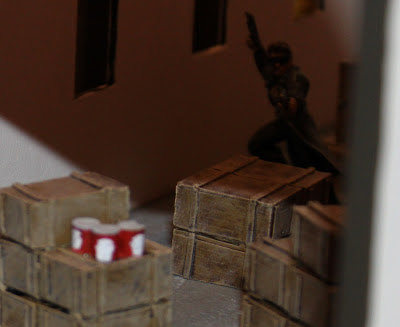 Another flurry of shots ring out as the struggling Gordon is hit again, this time by real bullets, as the forgotten Turk takes revenge for the three years he spent in Blackgate. Gordon slumps into unconciousness. 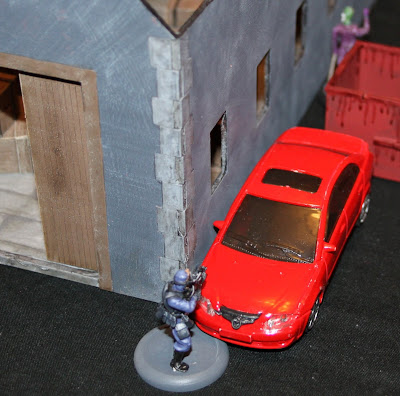 With the cops closing in, Joker slips out the back, one of the SWAT team briefly has a shot on his purple clad form, but he disappears chuckling into the night. Another mad scheme well under way...

When it came to counting up victory points, we had both managed to infiltrate the other's deployment zone, but the game was won by the taking down of Gordon. And so on to the review:

OVERALL
All in all, I like the game, and the things that I don't like are largely due to this seemingly being an early draft. Matt like the game too, and I've already furnished him with some spare Heroclix I had no plans for to allow Batman and Robin to join his cops and the Joker to team up with the Scarecrow, Mr Freeze and some henchmen.

I'd really recommend giving these rules a spin as there's a lot to like. Due to Knight Models' free downloads, you don't have to use their models to play. I'm going to be sticking with this game for my Gotham project for the foreseeable future and my enthusiasm for it has prompted me to get some more stuff painted which you'll see more of in the coming days.
Posted by Kieron at 16:48