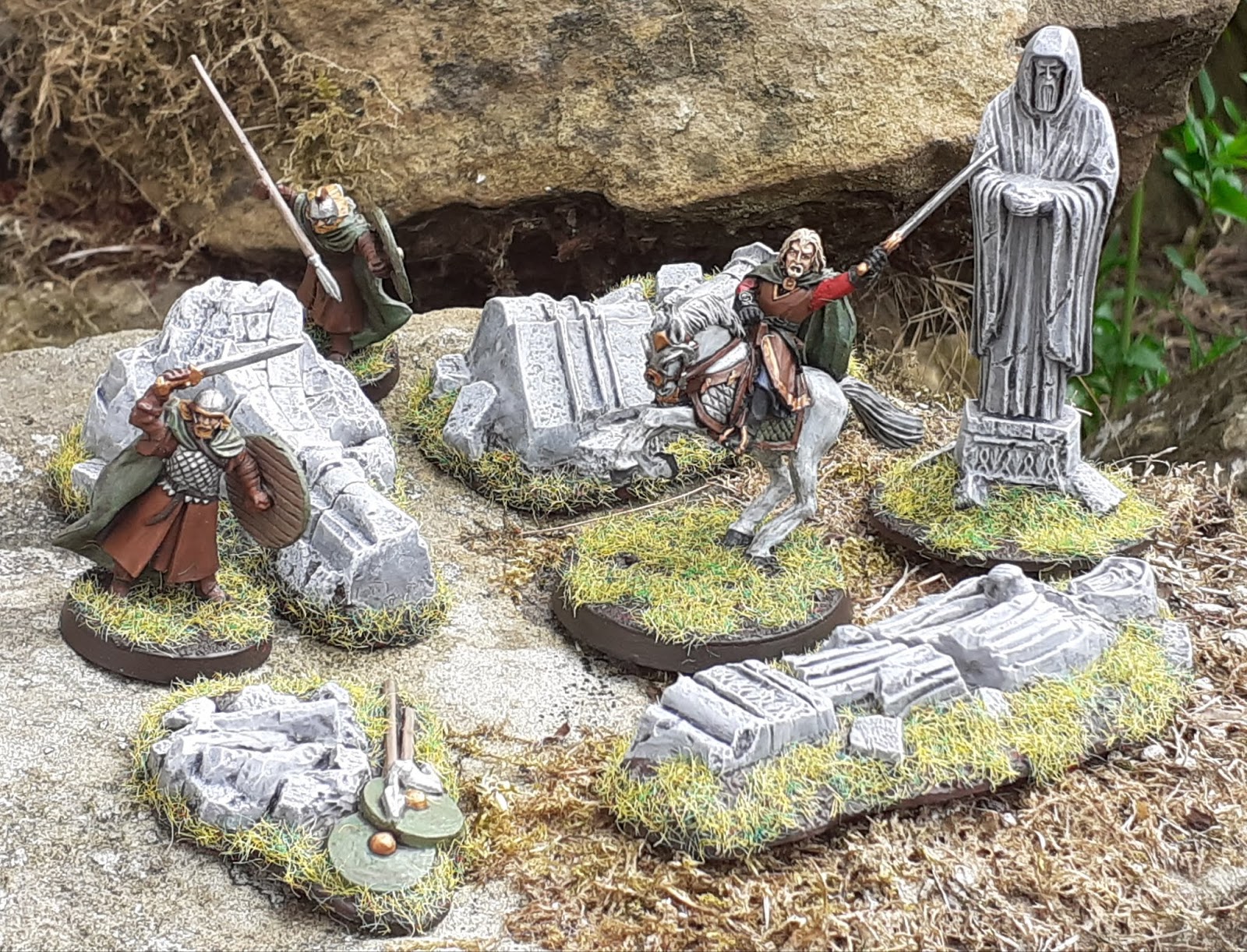 This post simultaneously hold some things I've blasted through like there's no tomorrow, and some things that have been, if I'm honest, a bit of a chore. 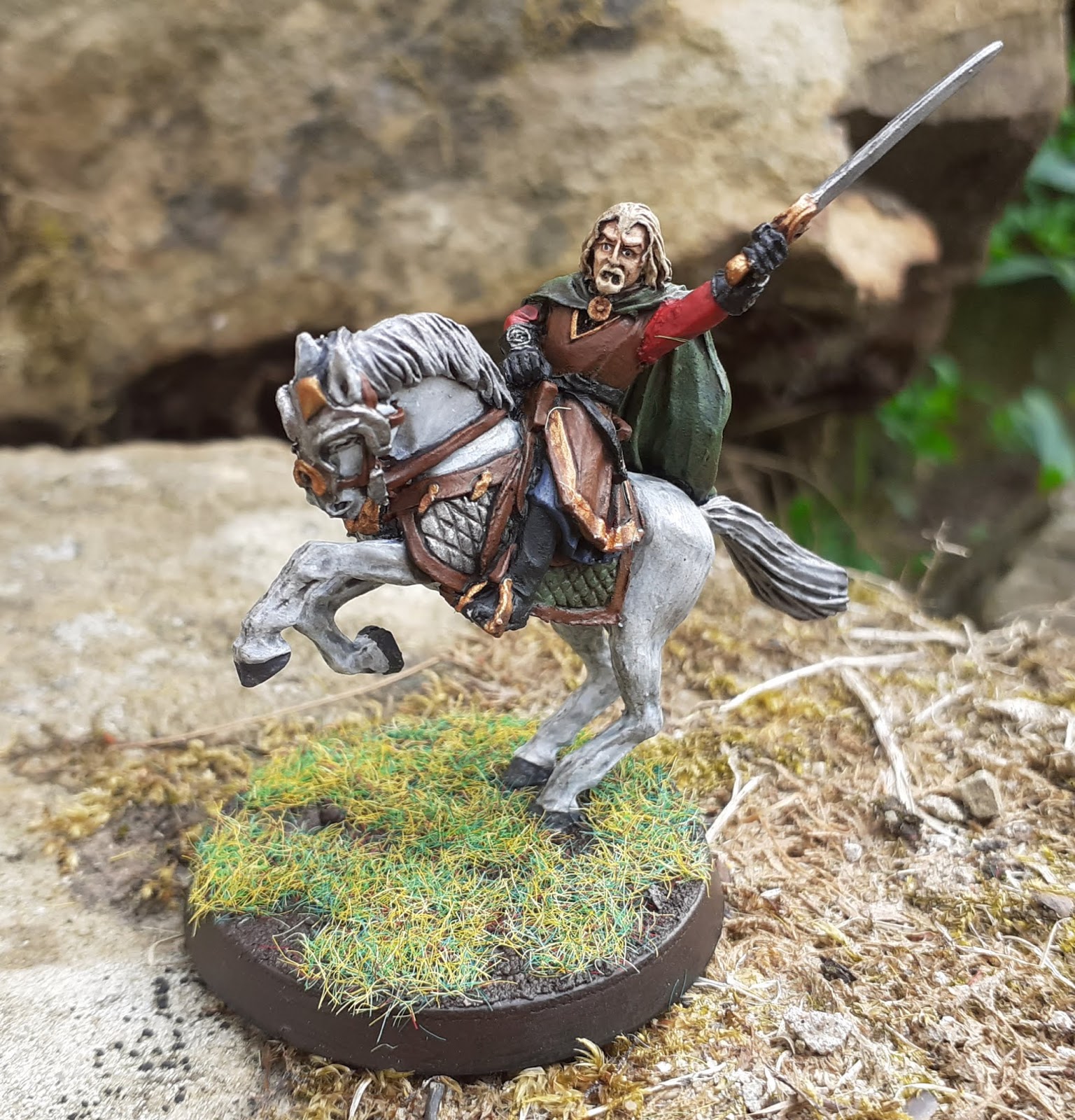 First up is Theoden, who's been neither. He one of the miniatures I got from Mike and so was pretty much base coated already. This made life a lot easier in terms of getting him finished, but I still wanted to take my time and get him done well and he's one of my favourite characters from the books. 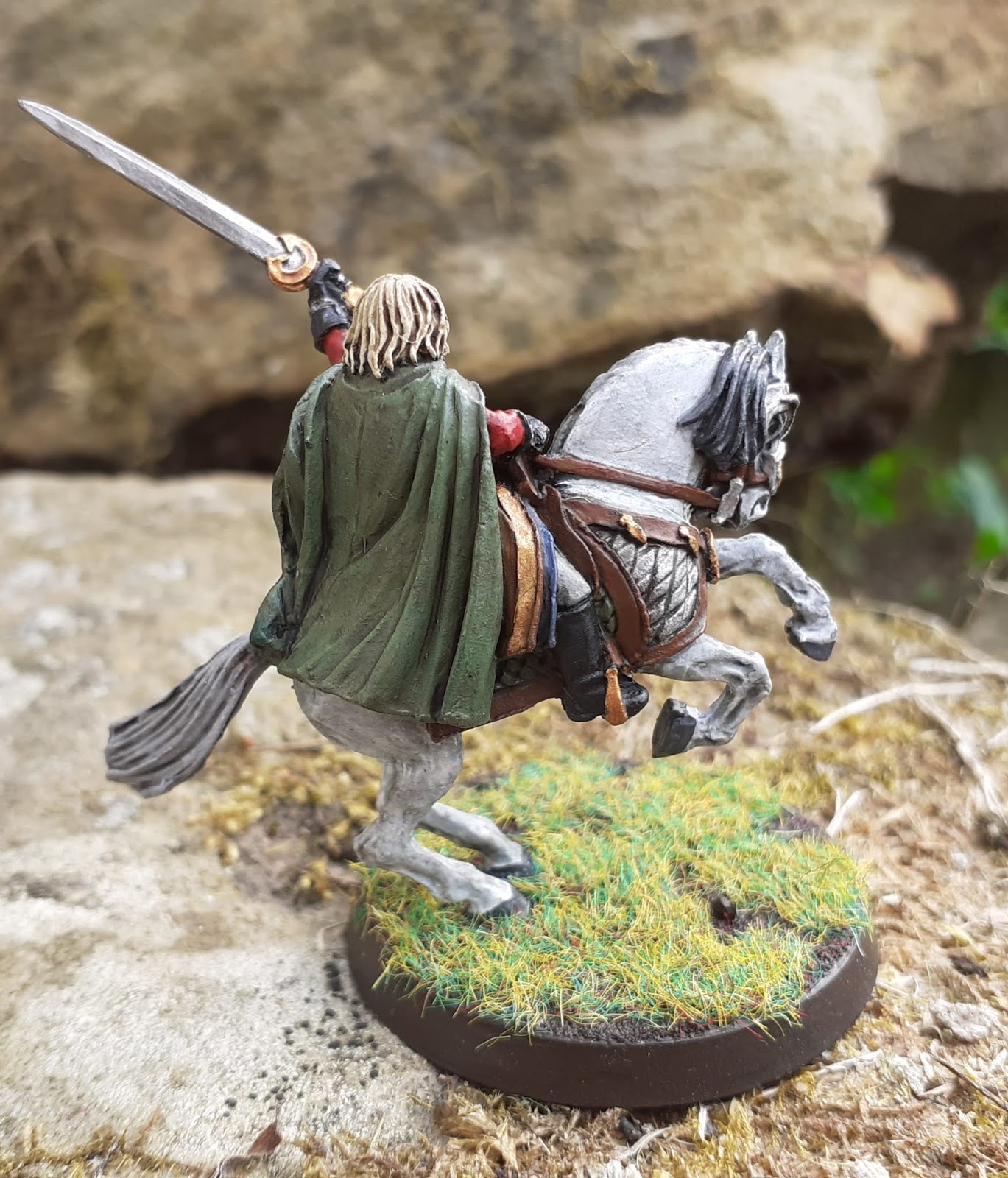 Perhaps this is why he's one of my least favourite characters in the films (at least he is in The Two Towers) because Peter Jackson decided to have him be more bitter and grumpy than I imagined him. It's not a problem for the films, and Bernard Hill does a great job, but he wasn't Theoden as the hero who fights even though he knows he's going to lose until the final film.
In game terms he makes my Rohirrim exponentially better, as pretty much everybody in the army has at least one special rule that kicks in when Theoden's around. This makes him the first name on the team sheet in standard games 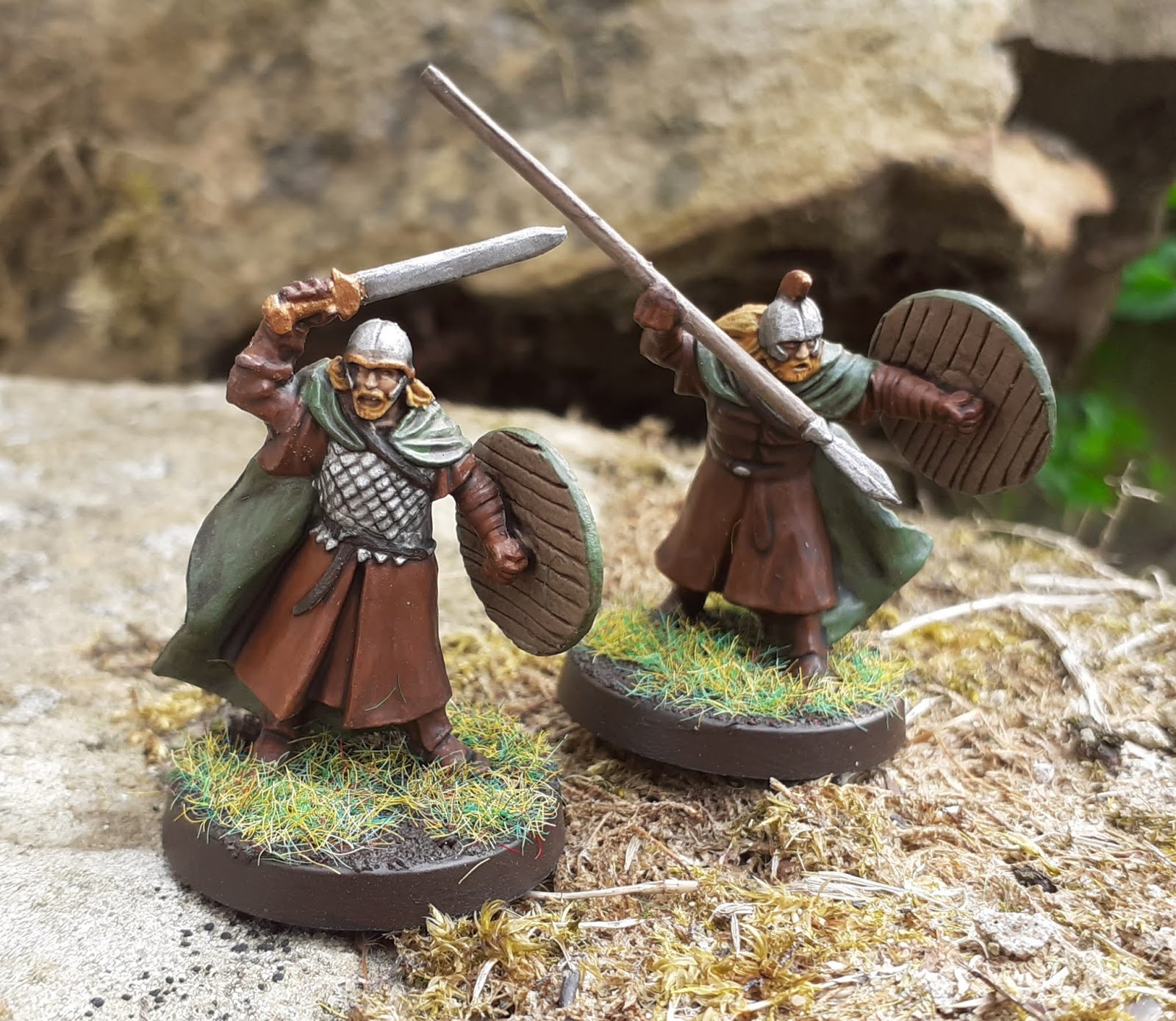 The two Warriors of Rohan are actually conversions of archers, as I already had twice as many of them as I did other Warriors. It was a simple case of trimming off bows, a bit of arm swapping, and sticking two spare viking shields on.
The fact that they have quivers is not a problem, as it makes them ideal for use as dismounted Riders. Also, the plain shields and different offer a bit of variety in what will be a quite uniform force. 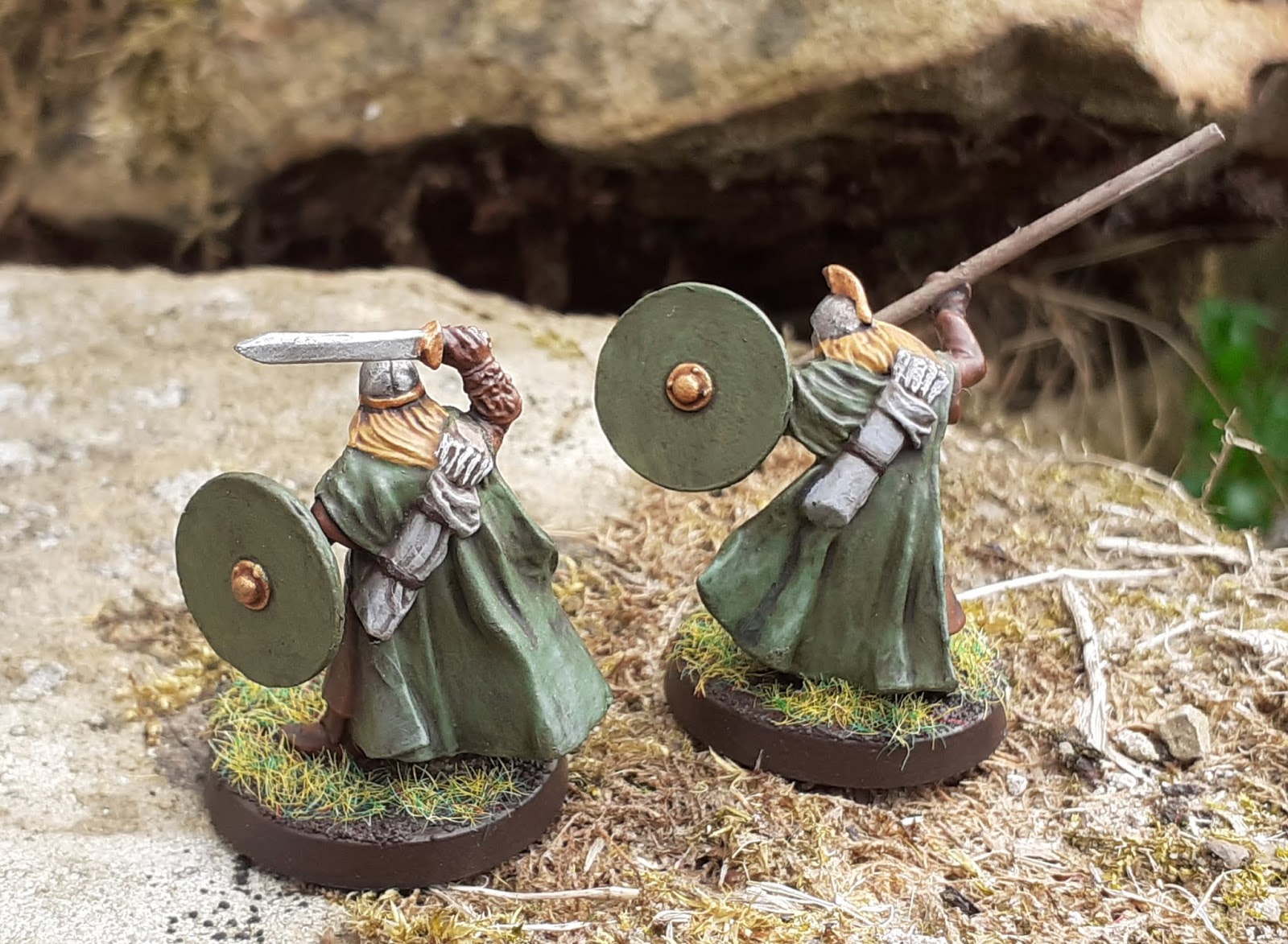 It was painting these two that felt like a chore and took longer than it should. It might be because the plastic Warriors (and to a lesser extent, the Riders) show their age a bit, and the soft details don't really gel with my lazy painting.
This is potentially an issue with another 20 of them winging their way to me via Ebay as I type... 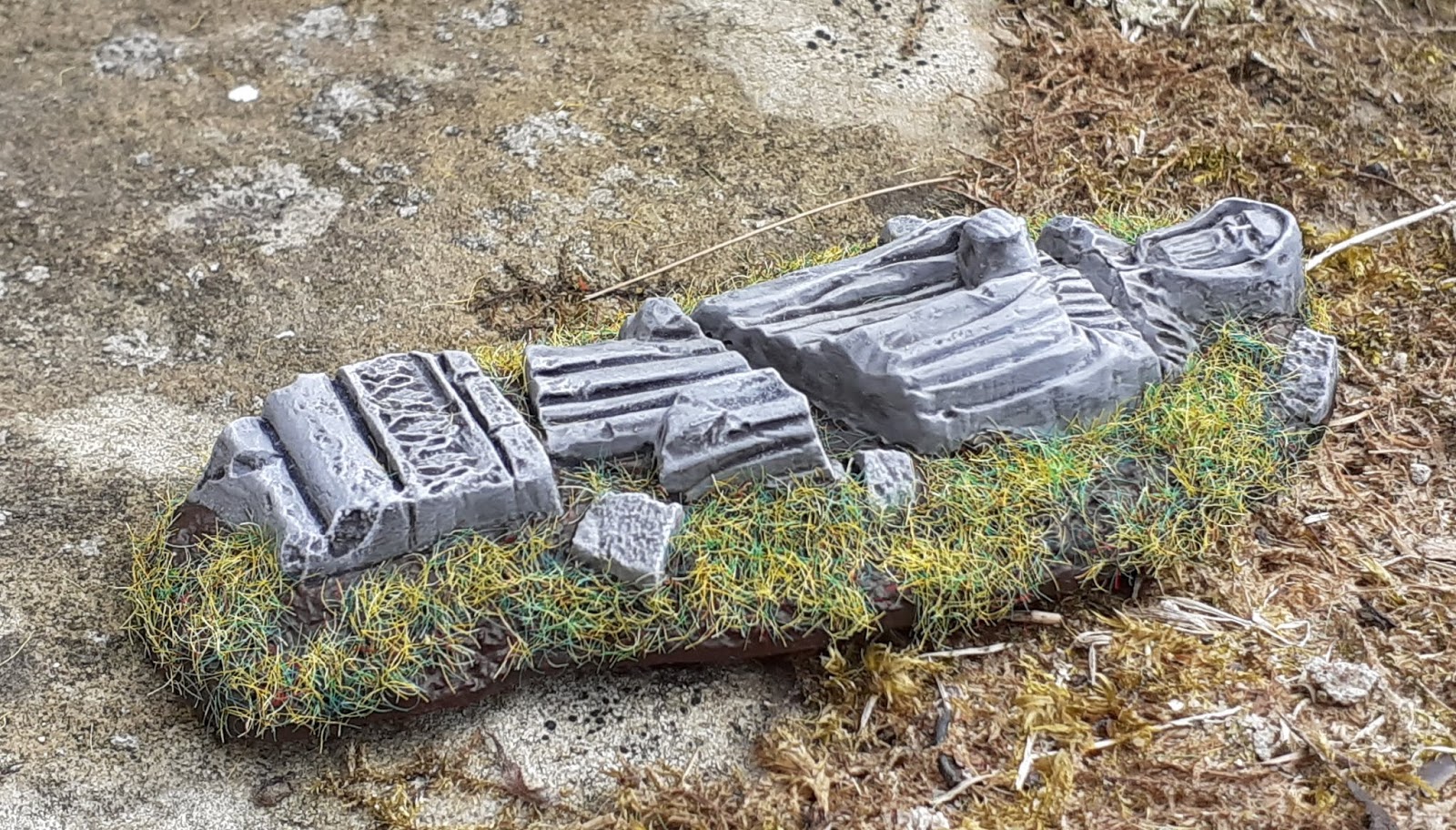 Another recent Ebay purchase, and at the opposite end of the spectrum in terms of speed of painting are these Osgiliath ruins. 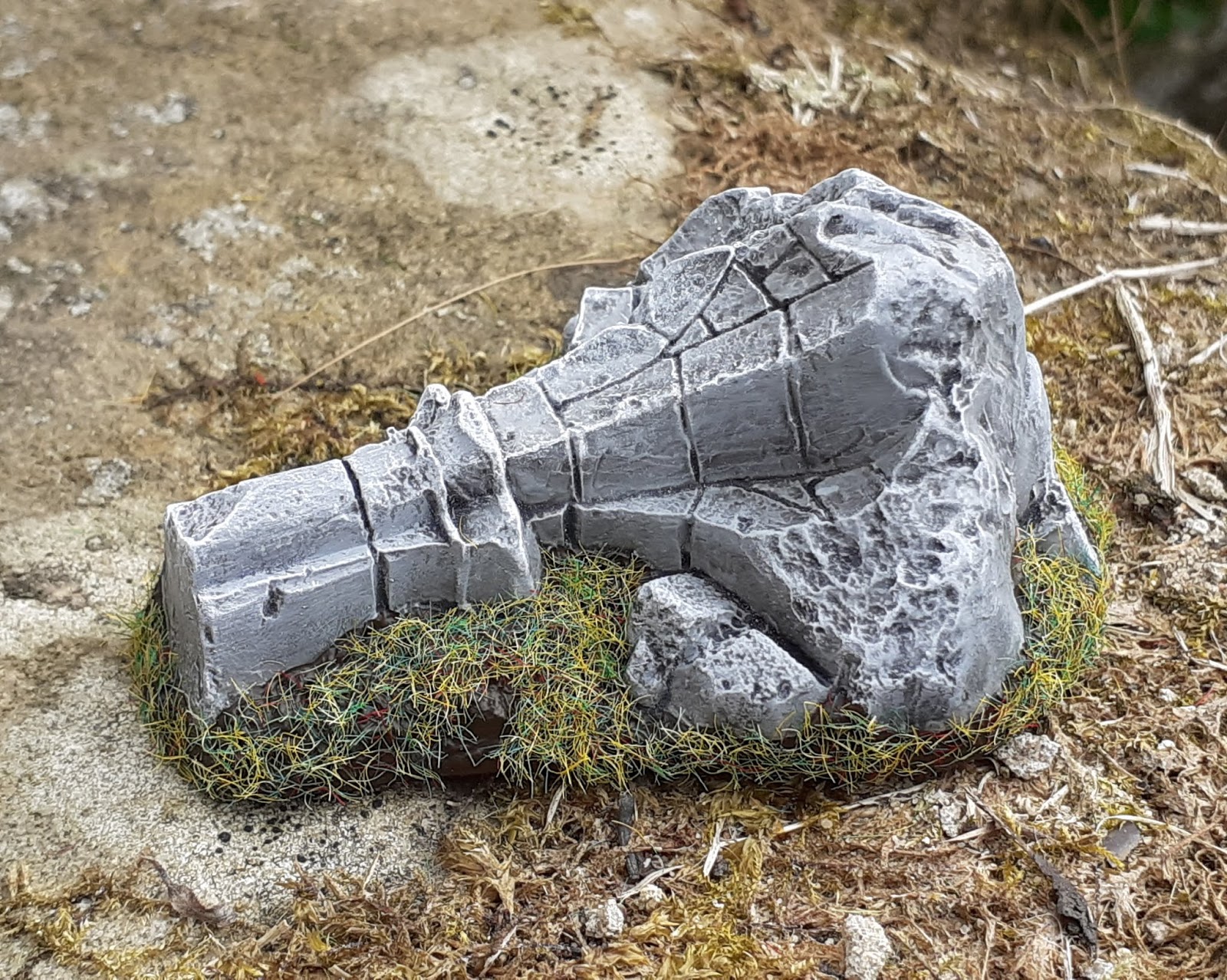 They only arrived yesterday, and in that time I've basecoated, washed, drybrushed and based them to completion. Possibly my fastest ever turnaround from purchase to painted...although they were very easy. 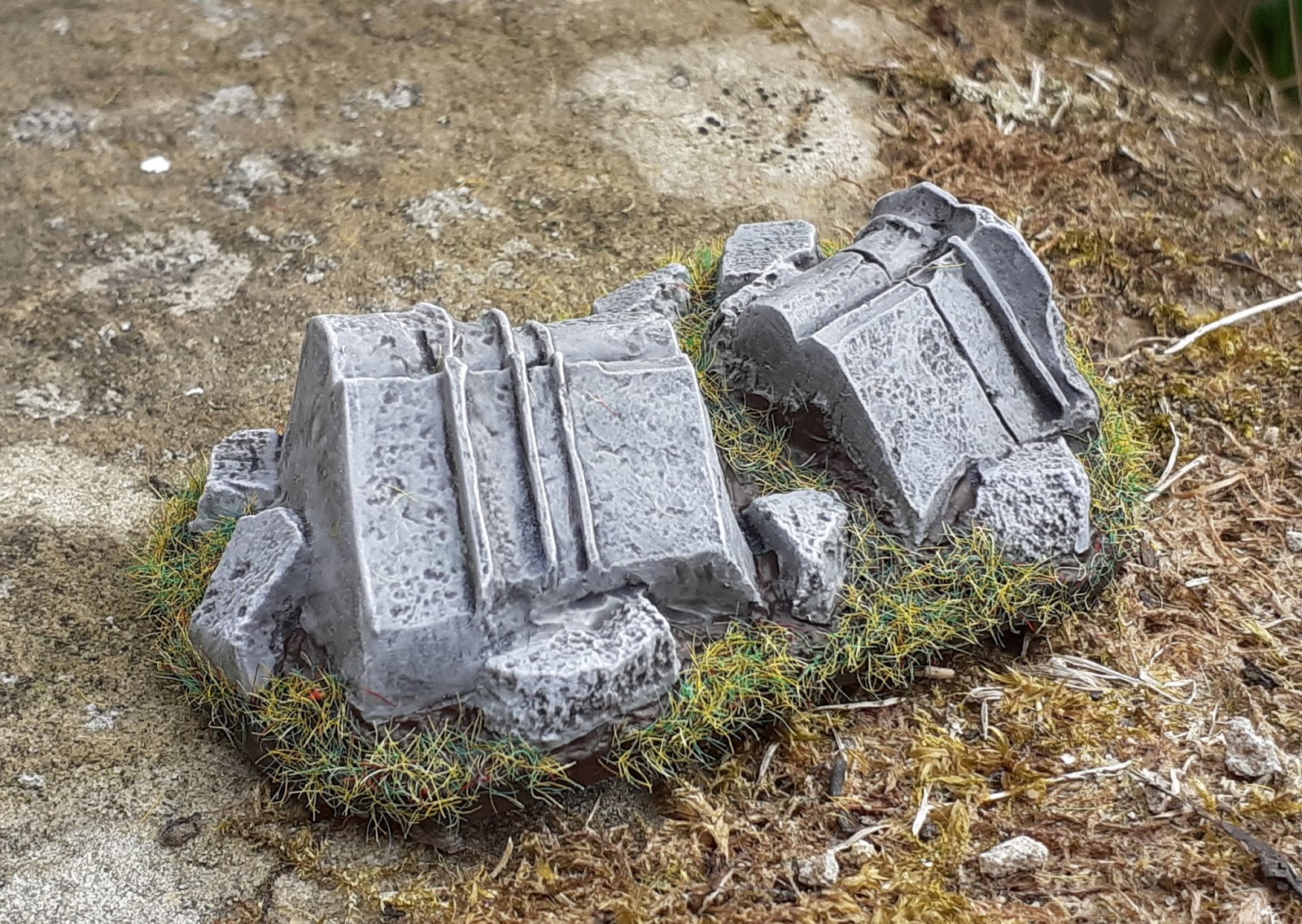 I've always fancied picking up this set as I feel they lend a Tolkeinesque feel to what can often be the quite generic terrain of LotR games. 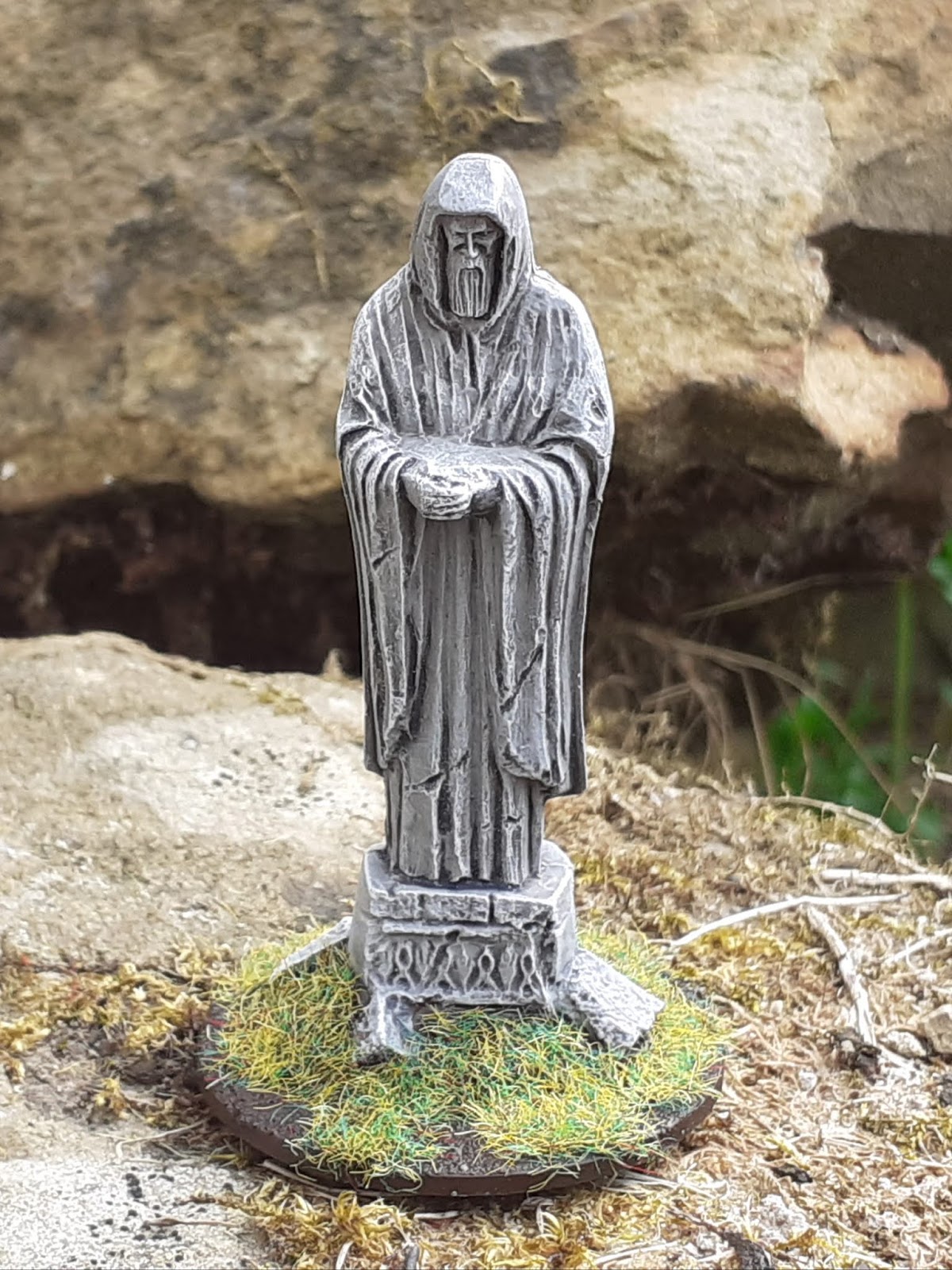 They will be particularly useful when I eventually get round to playing the breaking of the Fellowship scenario from the Armies of Middle Earth book, although I need to paint 24 Uruk-Hai Scouts and build Amon Hen itself, but I'm getting there. 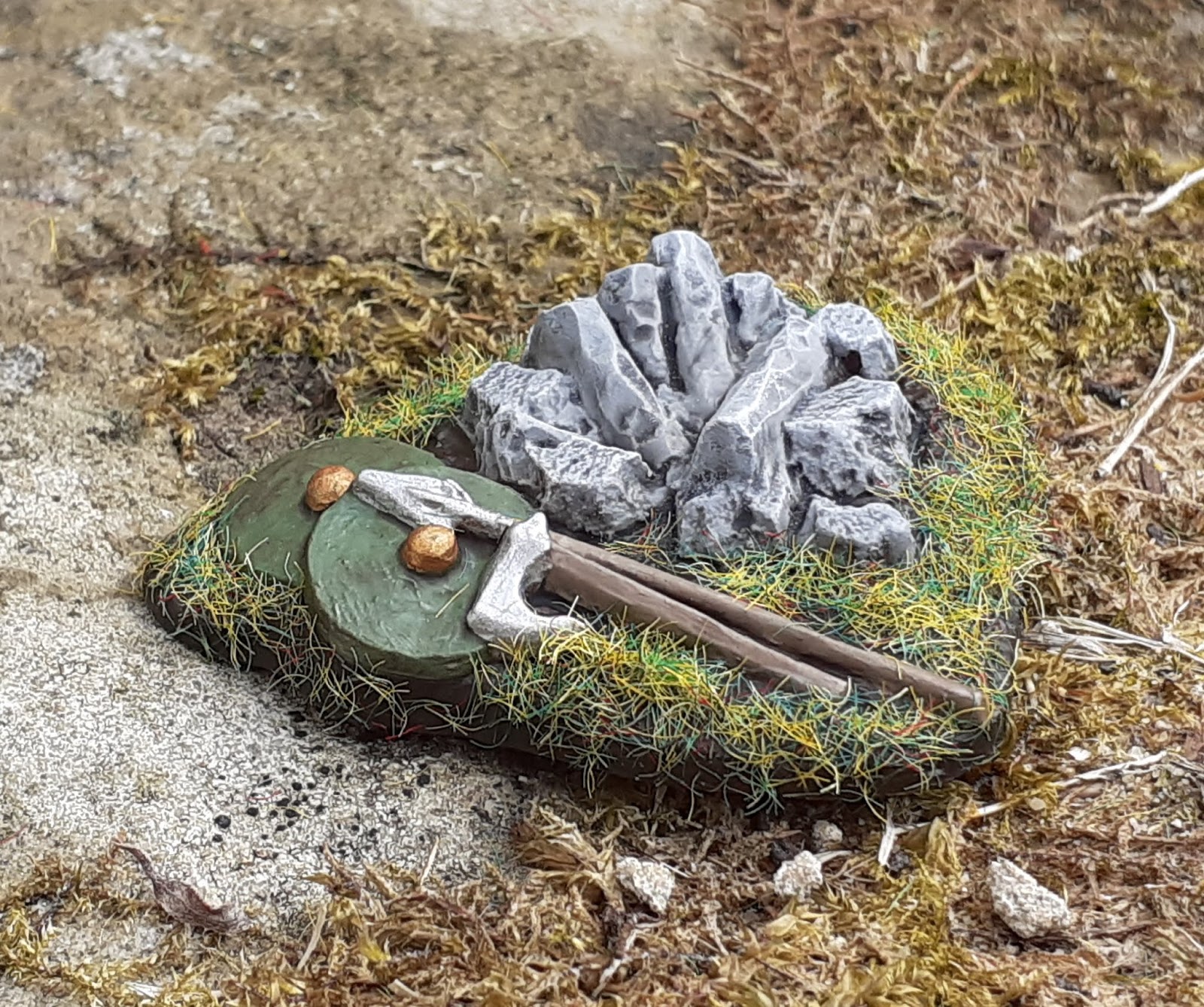 The sprue has a couple of oddities on it. The first being this piece which feels like a bit of a filler in terms of terrain. It certainly won't count as cover and is only a tiny bit of difficult ground.
The other oddity is the One Ring - in plastic. I've no idea what GW intended it to be used for, but when I've painted it I'll use it for popping over Frodo when he puts the Ring on (even though Gandalf expressly told him not to).
Theoden, the Warriors and the Ruins add up to eight models painted, although I haven't painted the Ring so that's six acquired. However, I did chop up a damaged Rider to convert the Warriors, so he counters the unpainted Ring.
Although I'm making headway, as I said, I've got a chunk of Warriors of Rohan heading my way, and possibly more if my Ebay adventures bear more fruit, so I'd better get cracking.
Acquired: 121
Painted: 132
Posted by Kieron at 09:16