Now that the Buckleberry Ferry had been built, the hobbits could try to make use of it to avoid the unwanted attentions of the Nazgul in Scenario 3 of the Quest of the Ringbearer.
This time, I'd set the game up for Pete to take control of the hobbits, whilst once again the Nazgul would be commanded by Sauron's most fell servant, Matt.

Scenario 3: Buckleberry Ferry
Having been helped by Gildor Inglorion, Frodo, Sam and Pippin successfully avoided the Black Riders as they crossed the Shire. 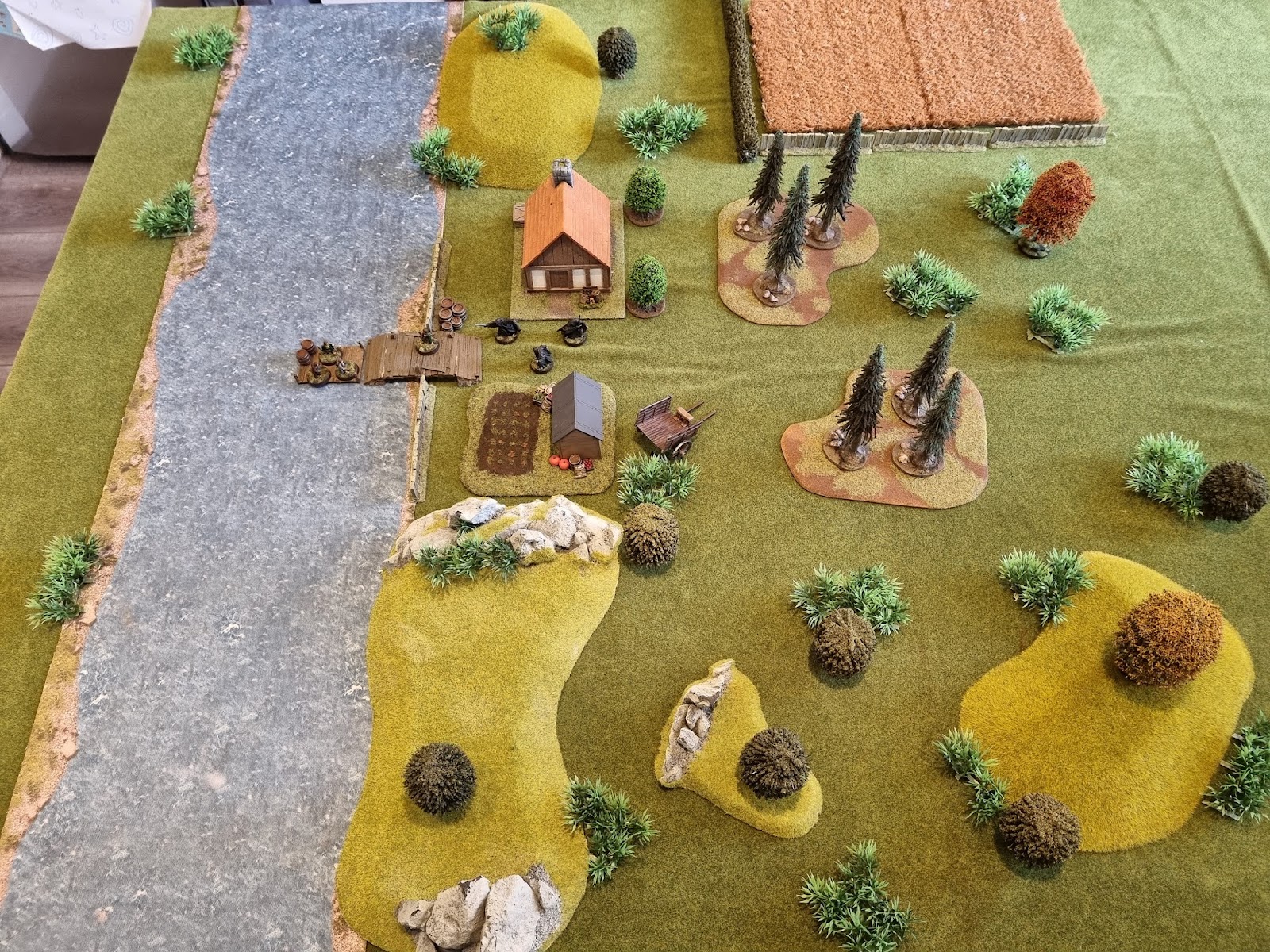 Making their way to the Brandywine River they are met by Meriadoc Brandybuck, who suggests that they make for the Buckleberry Ferry to throw off pursuit. 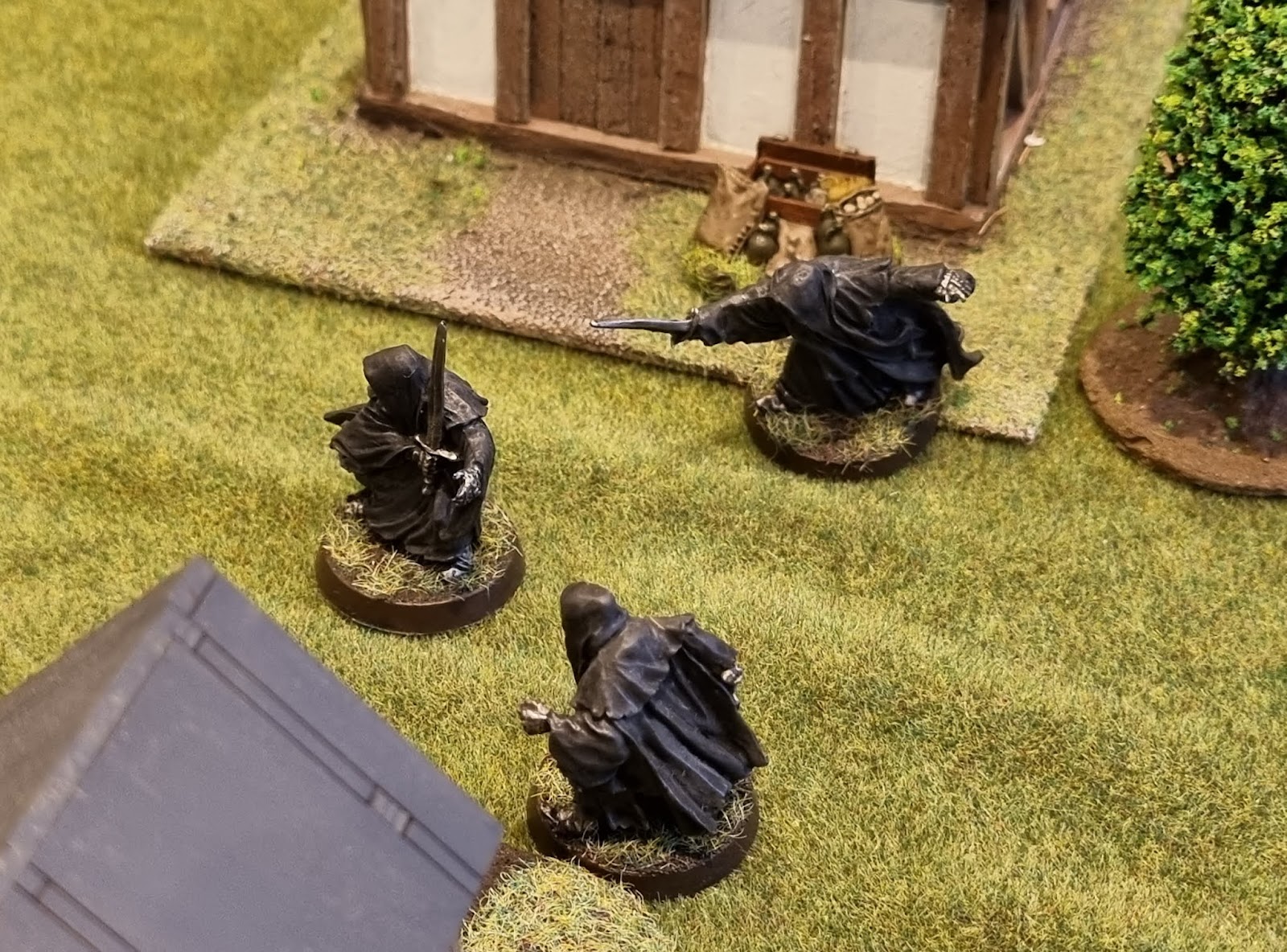 Unfortunately, upon arrival at they ferry, they find that the Ringwraiths have successfully guessed their plan and were patrolling around the ferrymaster's house. 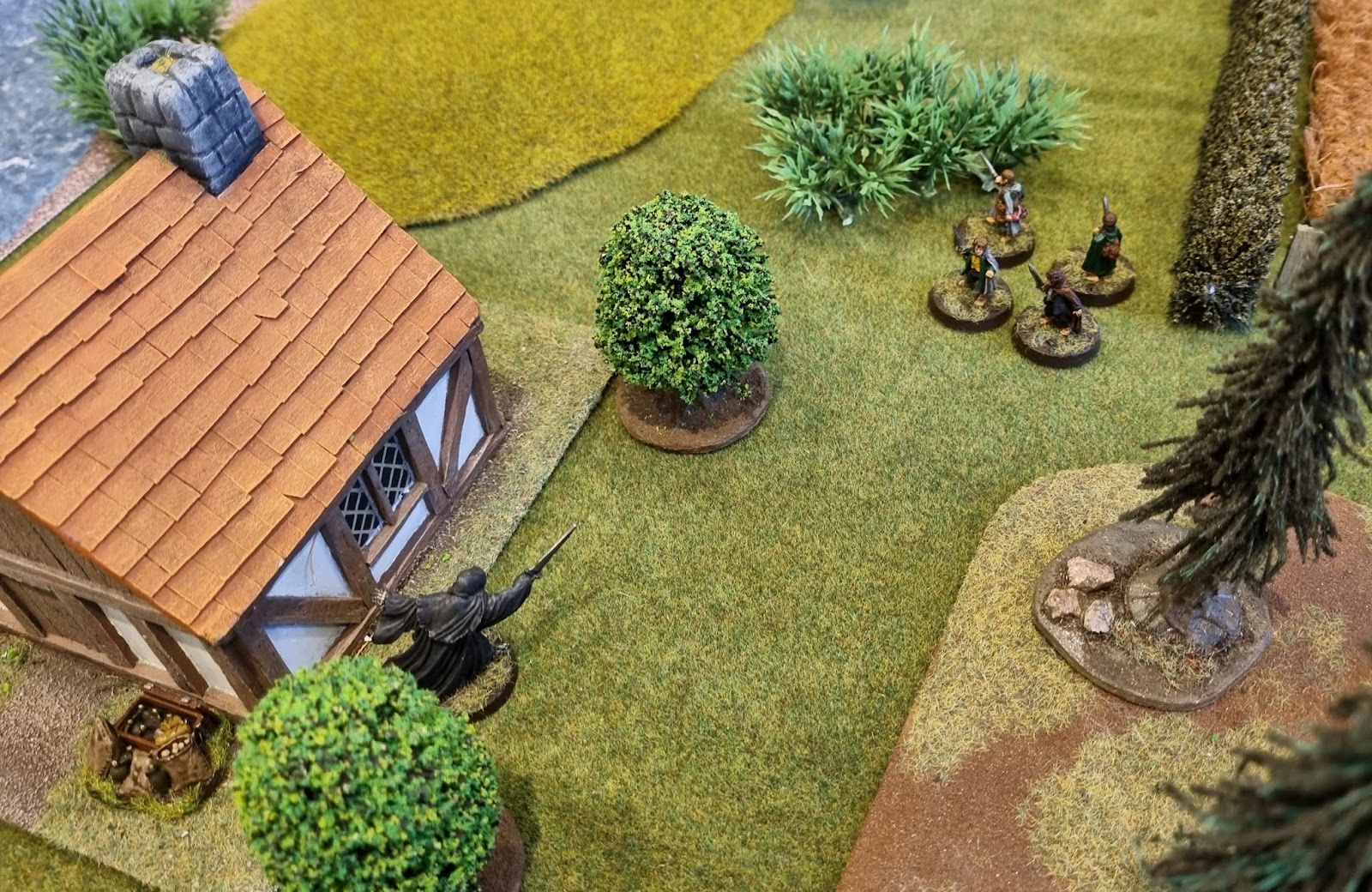 After a little bit of indecision, the hobbits decide to try to sneak round the house to the ferry, even though one of the dreaded Black Riders was snuffling and shuffling in their direction. 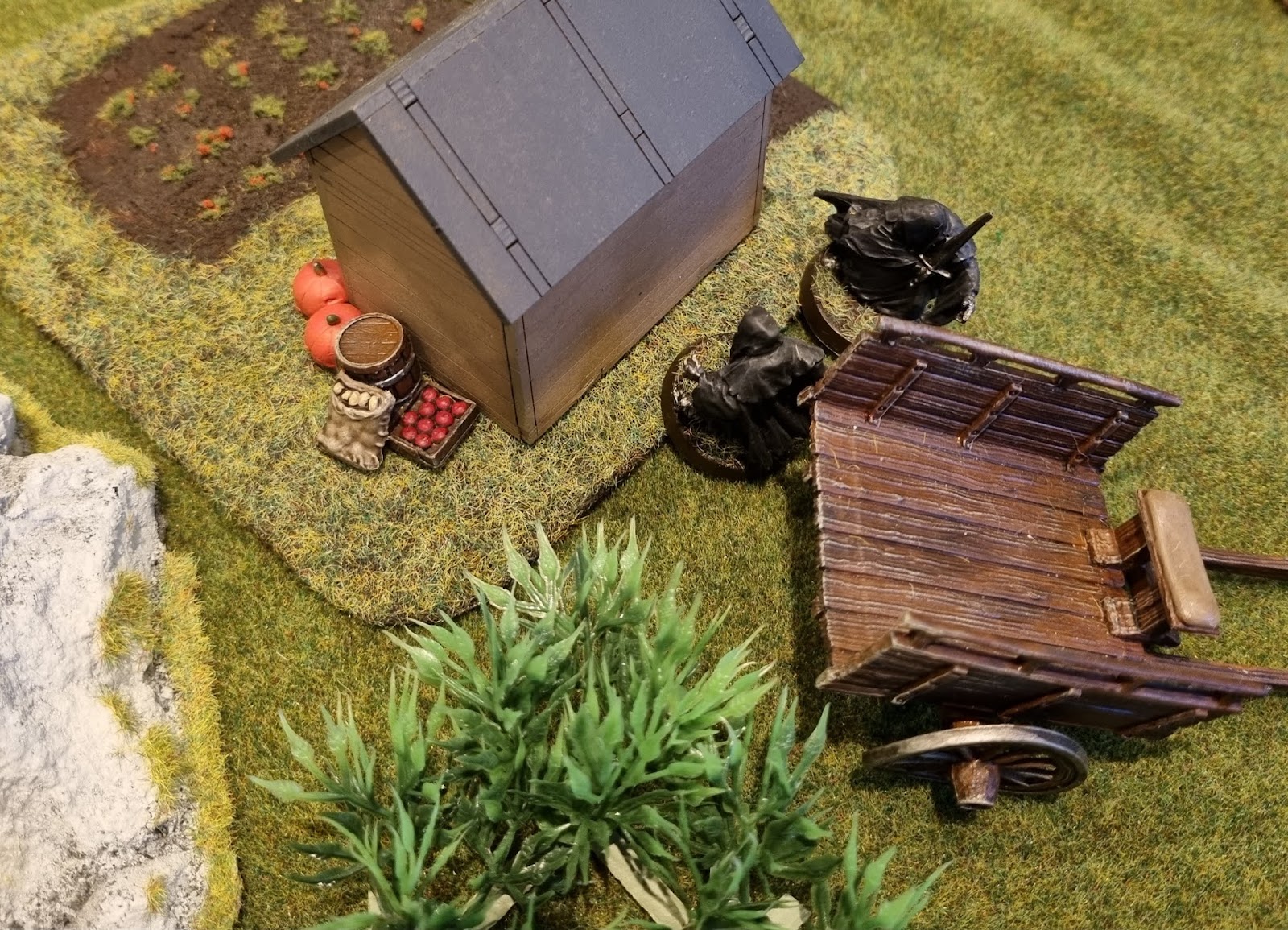 Meanwhile, two of the Ringwraiths had their attention taken by something behind the ferrymaster's shed.
Either that or they'd snuck off for a crafty smoke. 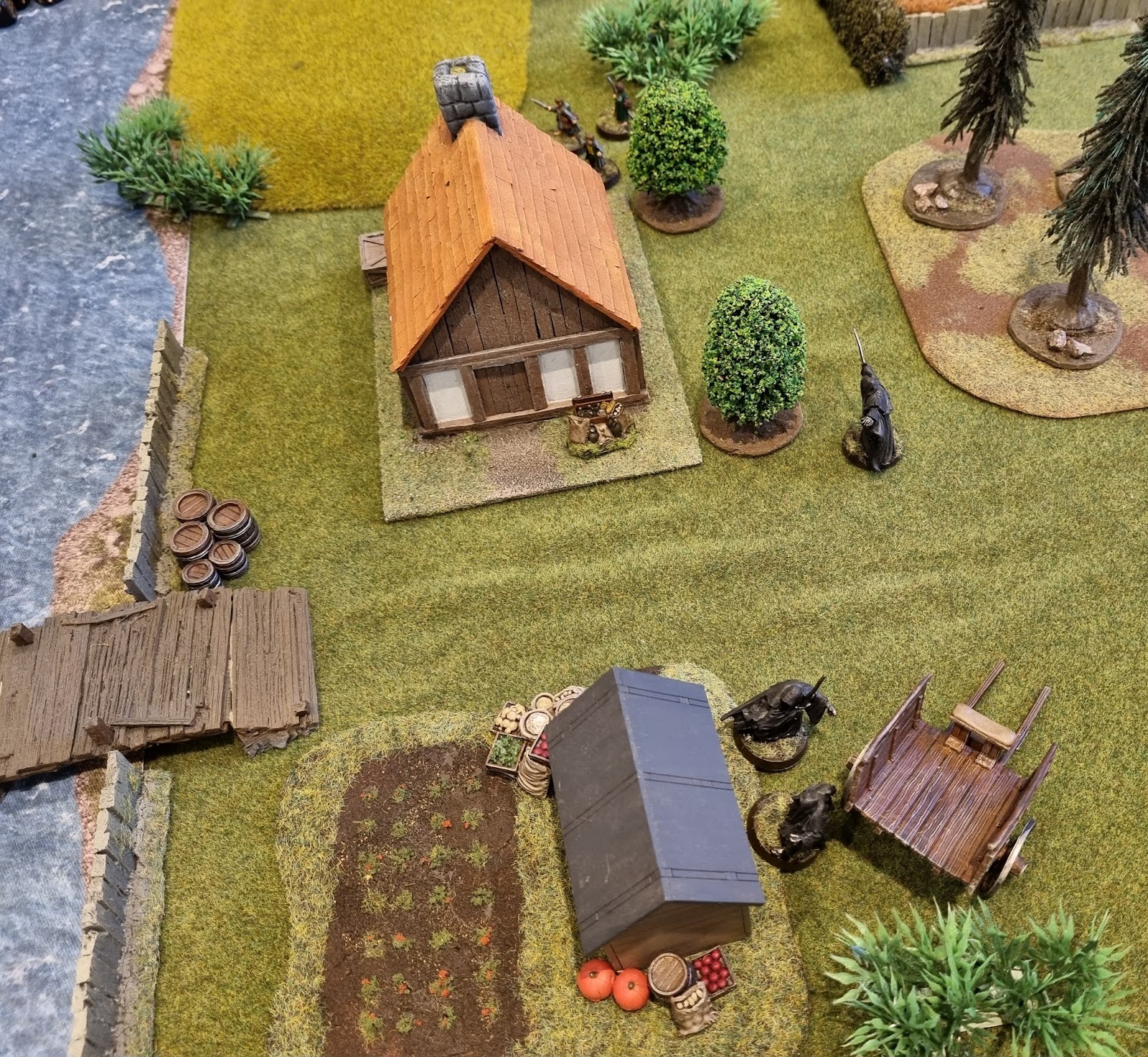 The hobbits took advantage of a period of inactivity from the Ringwraiths to continue to sneak around the house. 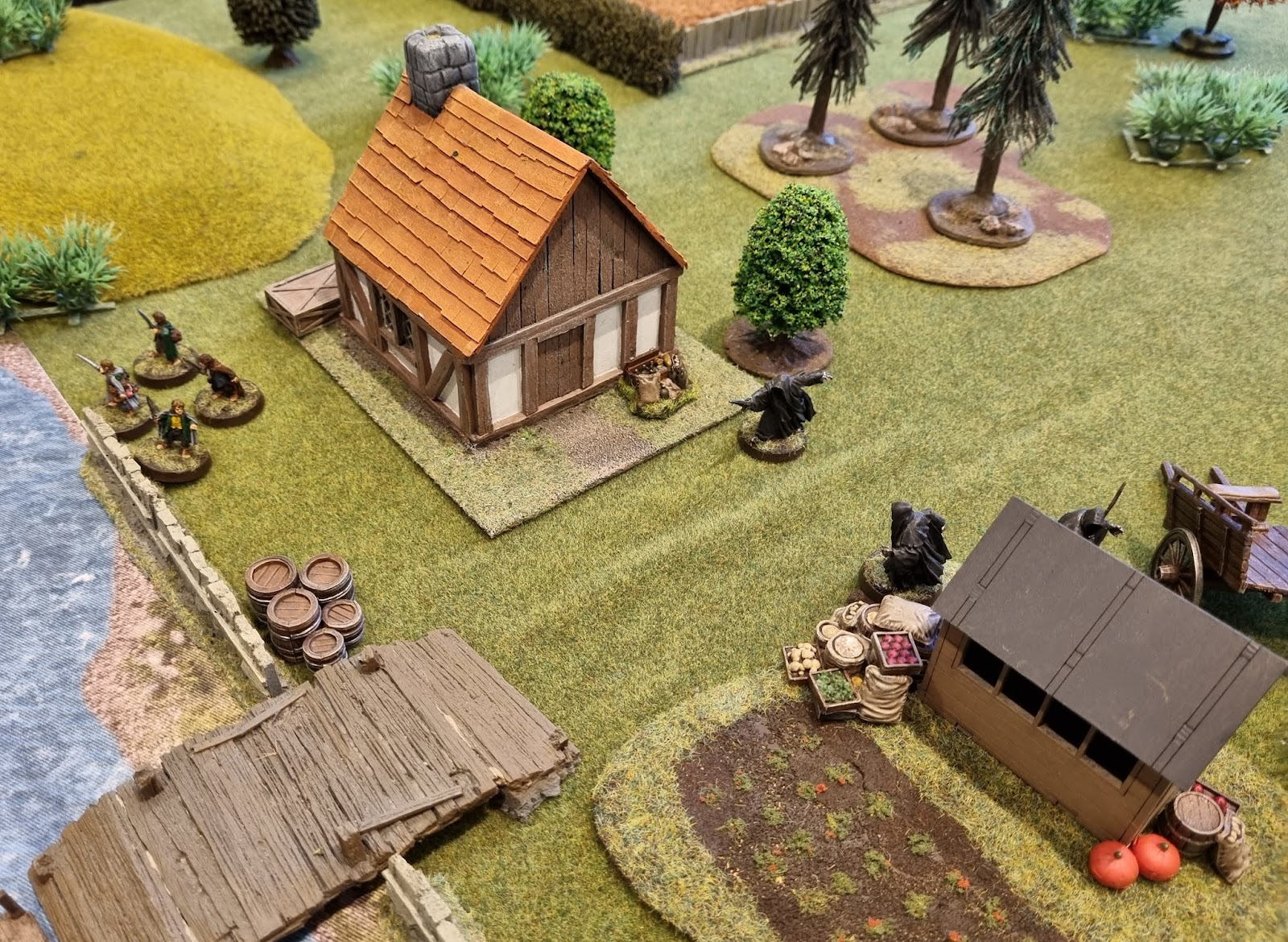 However, ultimately they knew that they'd have to risk getting closer to their pursuers to reach the ferry. 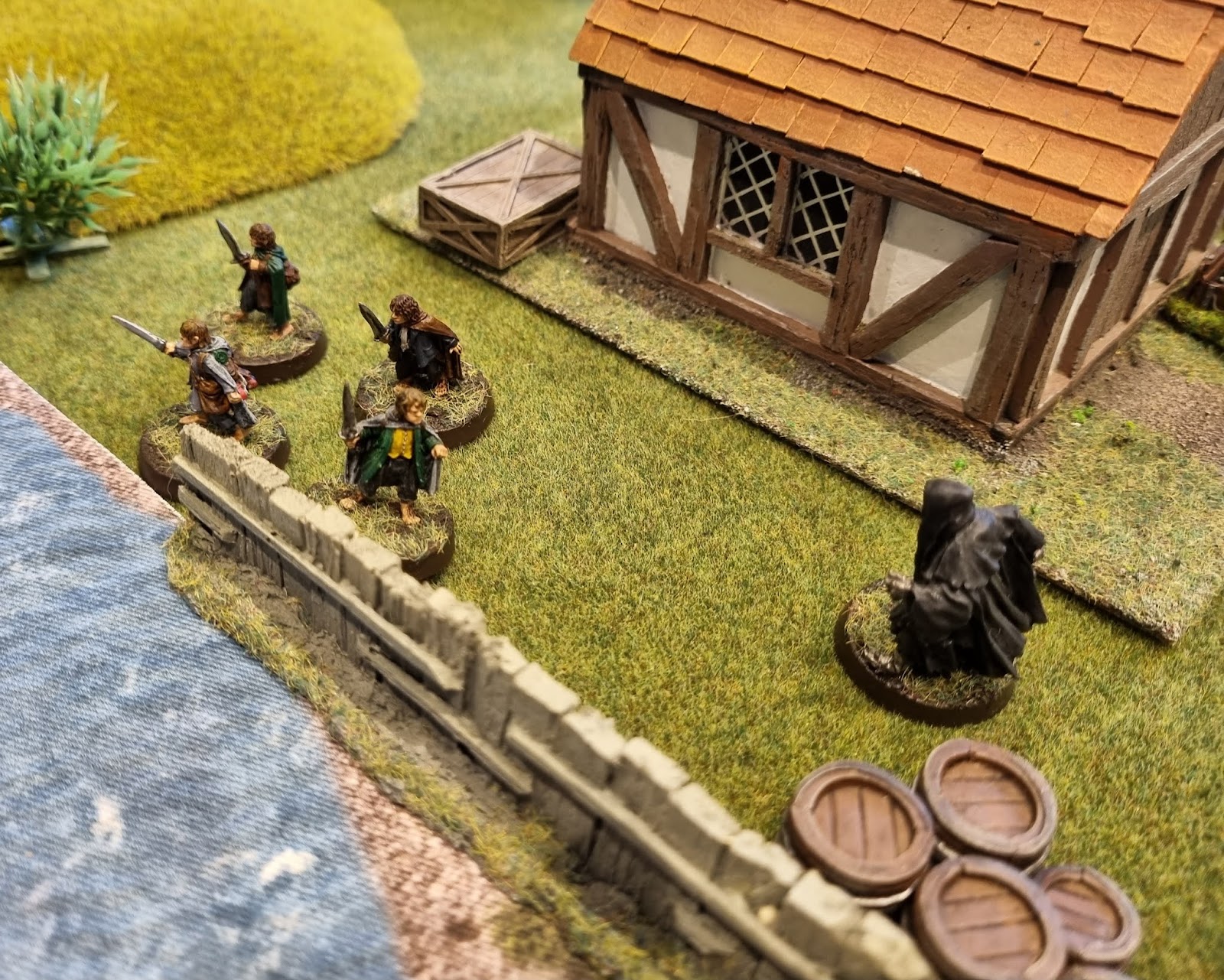 Suddenly a Black Shape swept round the corner towards the hobbits on the riverbank. A piercing, wailing shriek filled the silence. The alarm had been raised. 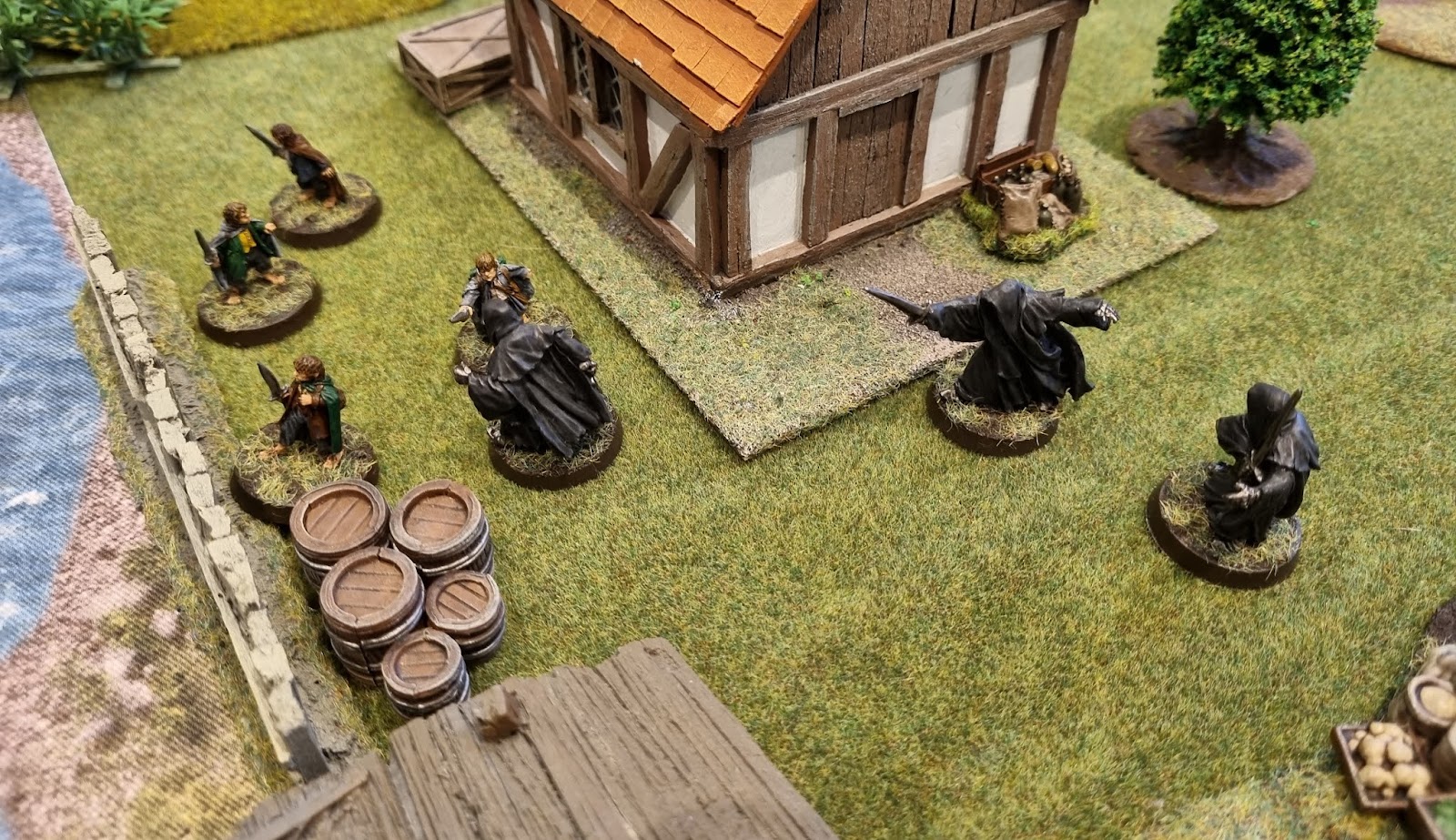 "Back you devil!" shouted Sam, bravely rushing to intercept the Nazgul, but Merry and Pippin lacked the courage to join the fight.
Not wanting to be cornered with the Ring, Frodo scuttled towards the ferry, intent on clambering over the fence to get there. 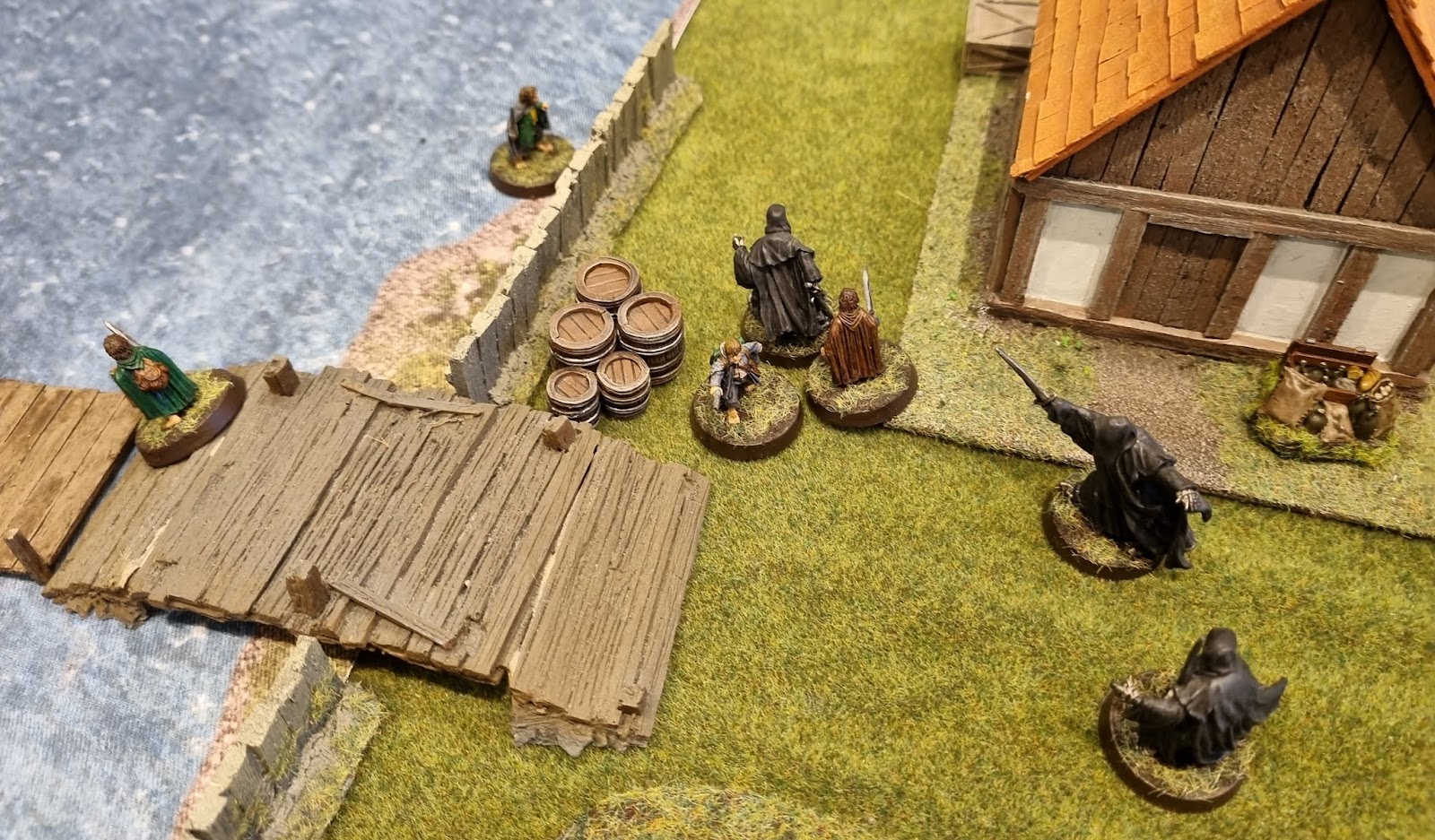 Seizing the initiative, Pippin found his nerve and joined Sam in trying to hold up the servant of the enemy, whilst Merry followed Frodo, who rushed to the edge of the jetty. 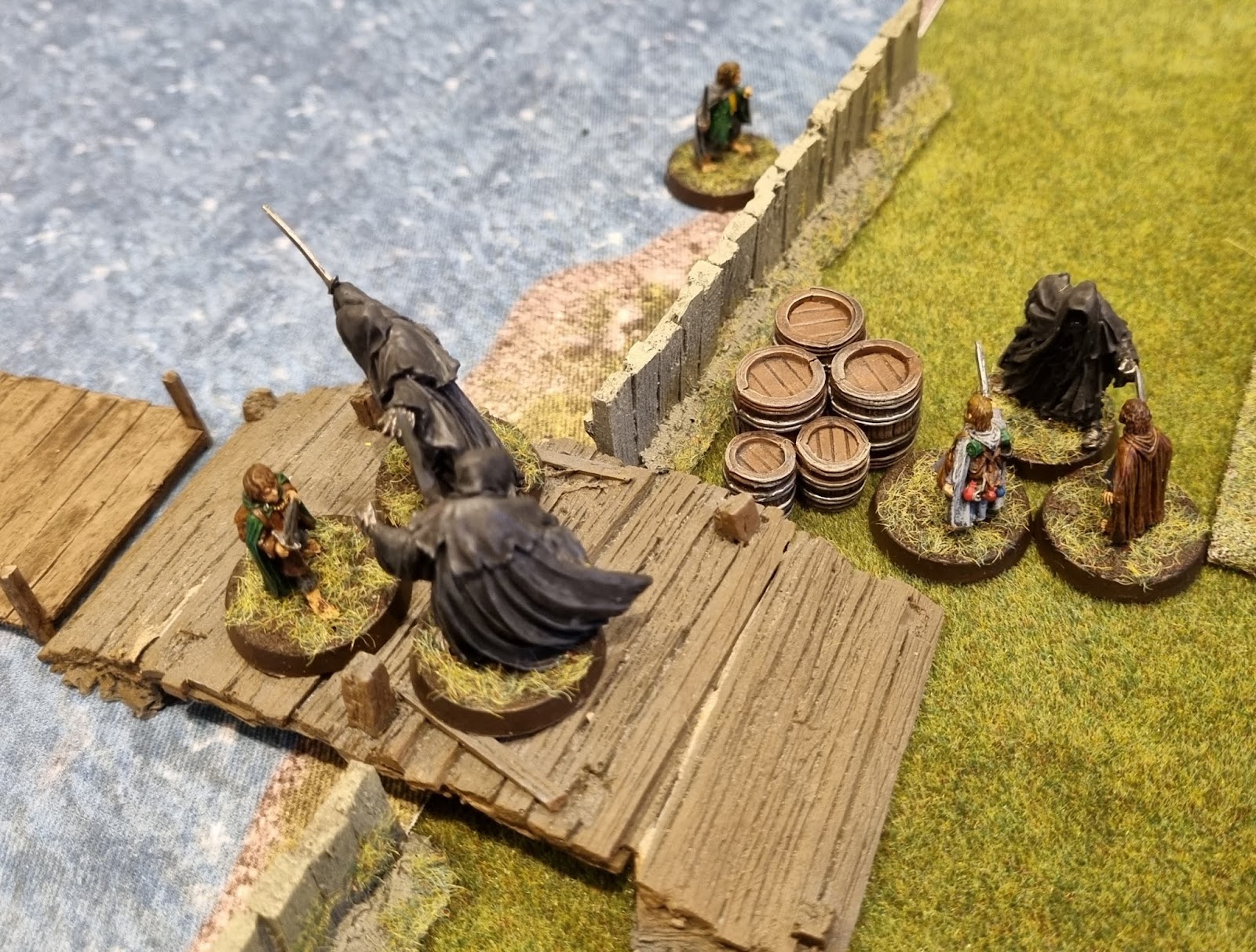 Suddenly, two Black Riders rushed across the jetty towards Frodo, whose mind was filled with sinister, whispering voices compelling him to turn around and walk back towards his foes.
"Come back. Come back. To Mordor we will take you!" 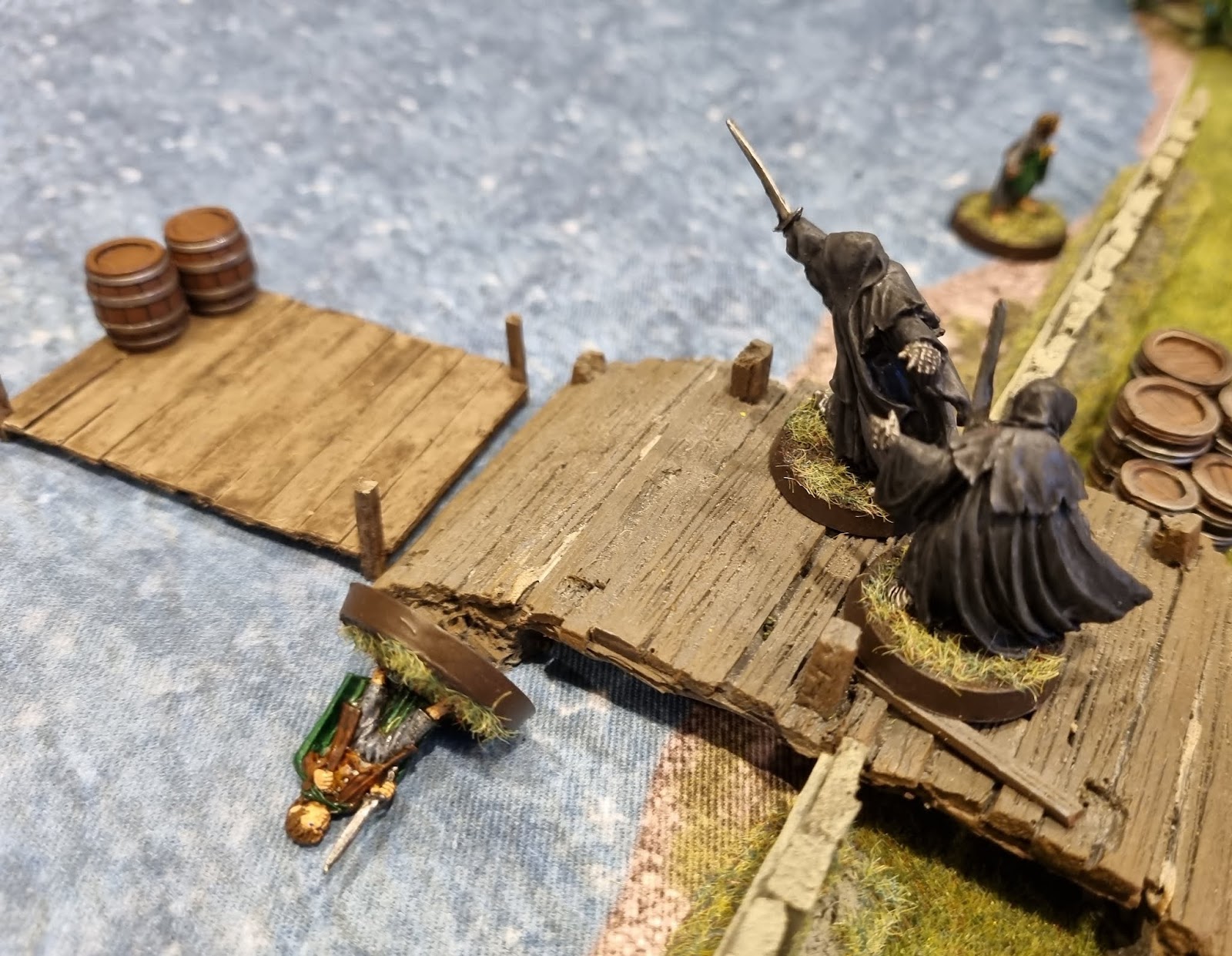 A blade flashed in the moonlight and Frodo cried out in pain, staggering backwards and toppling into the river...
The servants of Mordor were victorious, and Frodo had been struck down, but the quest wasn't over.
Fortunately, Pete avoided rolling a one on the casualty table, creating the first of what are likely to be many fake out deaths, totally in keeping with the movies.
We decided that Frodo was struck and toppled into the water, where the Nazgul couldn't follow, allowing his friends to find him on the eastern bank later and get him to Crickhollow, where a bath and a good meal sorted him out.
As Crickhollow is a rest point in the campaign, this defeat didn't cost the hobbits too much, as Might, Will, Fate and Wounds would all be restored for the next scenario.
This also meant that deciding on the bravest companion (Sam for being the only one to charge the first Nazgul) and 'Fool of a Took' Merry (for achieving nothing other than climbing over a fence) had no real impact either.
Before moving on to the next scenario, we played this one again, this time with me running the hobbits. I did manage to get Frodo across the river to safety, but only by him swimming very slowly, rather than using the ferry (so glad I didn't spend too much time or money on something that didn't actually get used), and losing the other three hobbits. The highlight of the game was Pippin beating two Nazgul in combat.
Scenario 4: The Old Forest
Having rested and recuperated at Crickhollow, the hobbits leave their 'friend' (they call him 'Fatty') Fredegar Bolger to hold the fort, whilst they head off into the Old Forest. 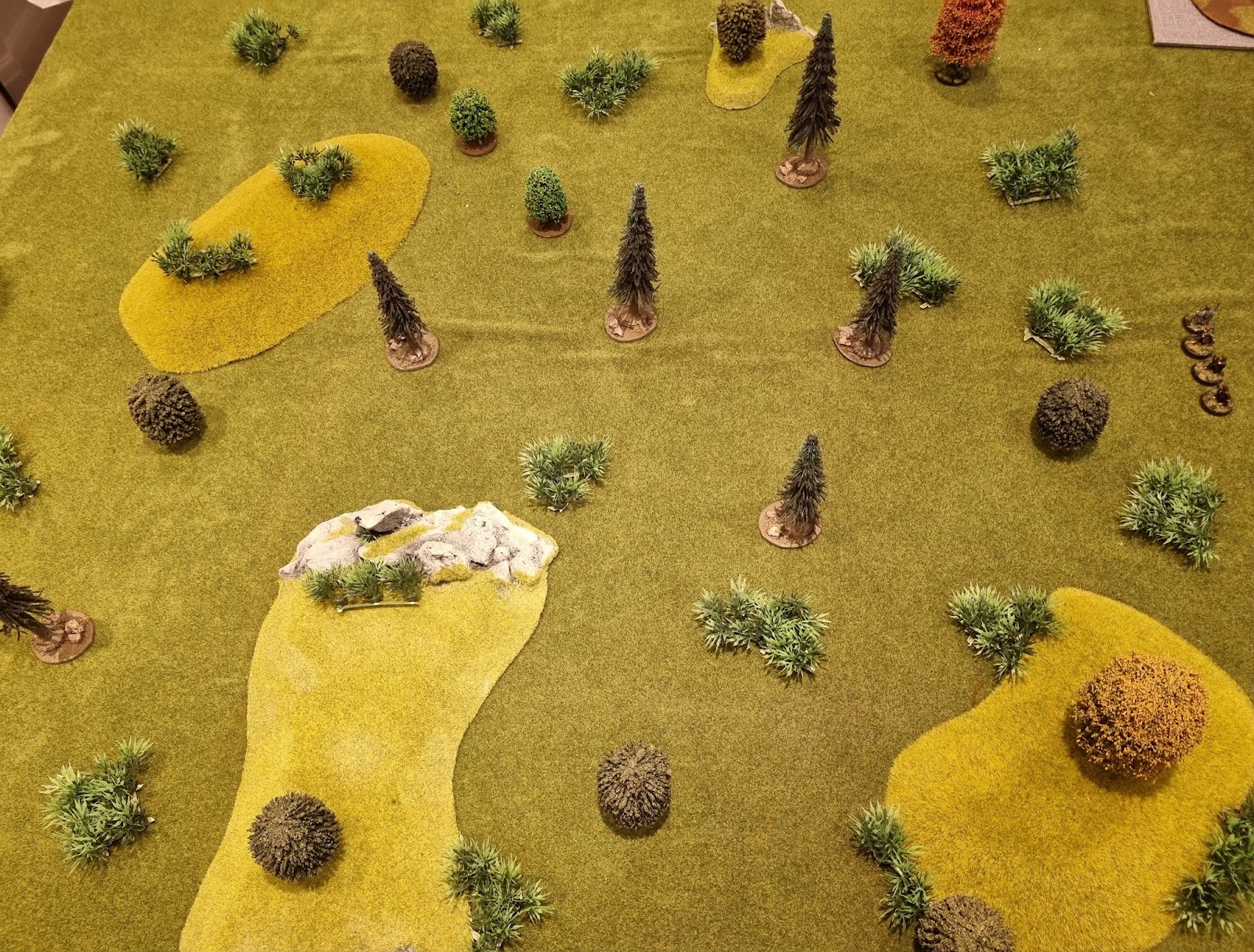 The hobbits would have to make their way across the board whilst the forest itself tried to stop them. I would be running the hobbits, and Pete and Matt demonstrated considerable enthusiasm in throwing trees in my path.
I'll stop at this point to tell you about how, many years ago, I submitted an Old Forest scenario extremely similar to this one to a fan website called The Last Alliance. At the time, this site was the centre of the LotR SBG community and so will possibly have been seen and perhaps played by many of the people who now contribute to the game.
I'm not claiming credit, as this scenario isn't exactly the same as mine (for example, I included Old Man Willow in the centre of the board), but I'd like to think that my original idea perhaps, in a small way, influenced the creation of this one. 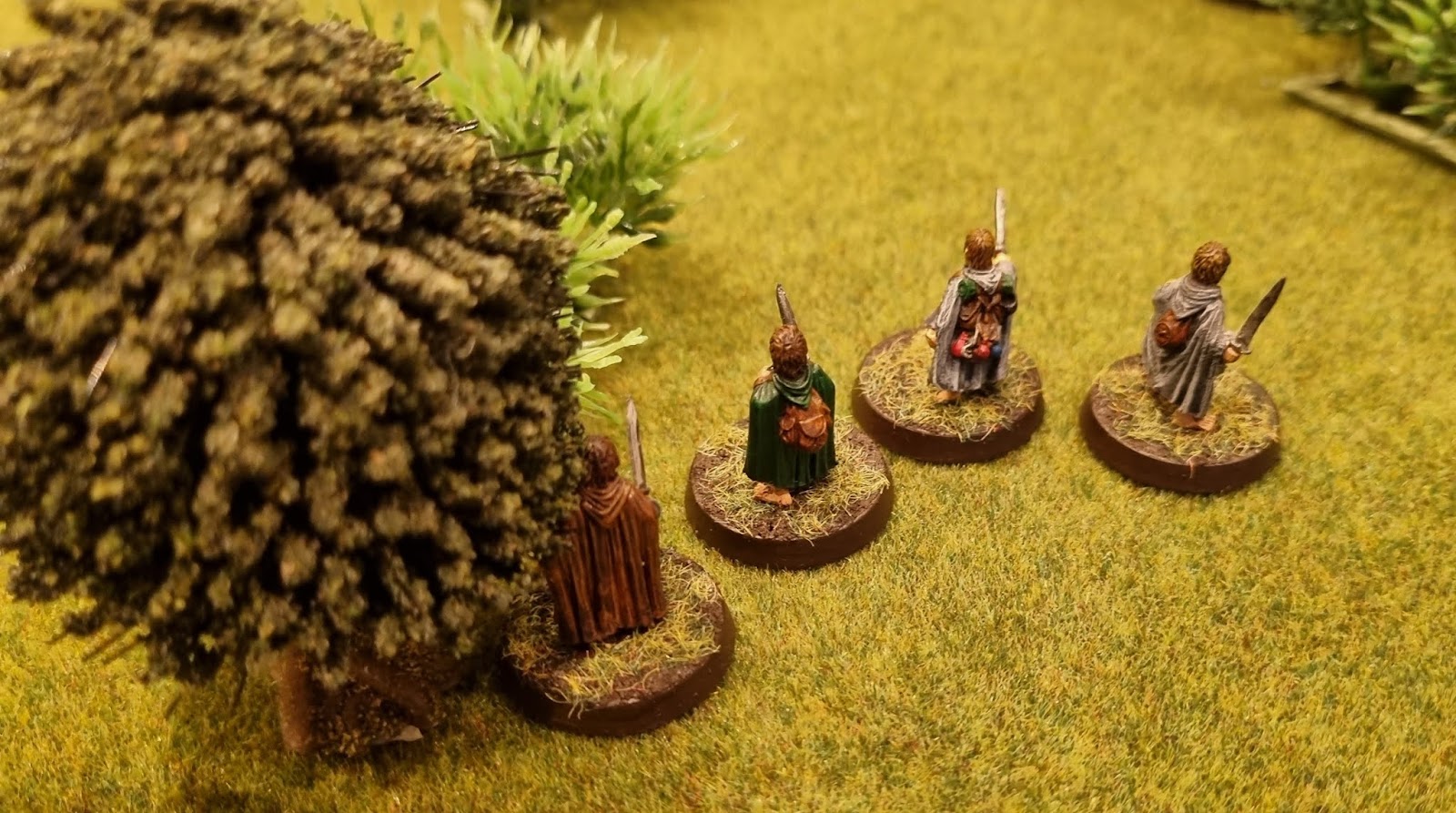 We forgot to penalise the hobbits 2" of movement on the first turn for losing the last scenario, but this didn't really matter as Pippin was immediately set upon by a passing bush. It was driven off, but the hobbits were now aware that the Old Forest would not let them pass easily. 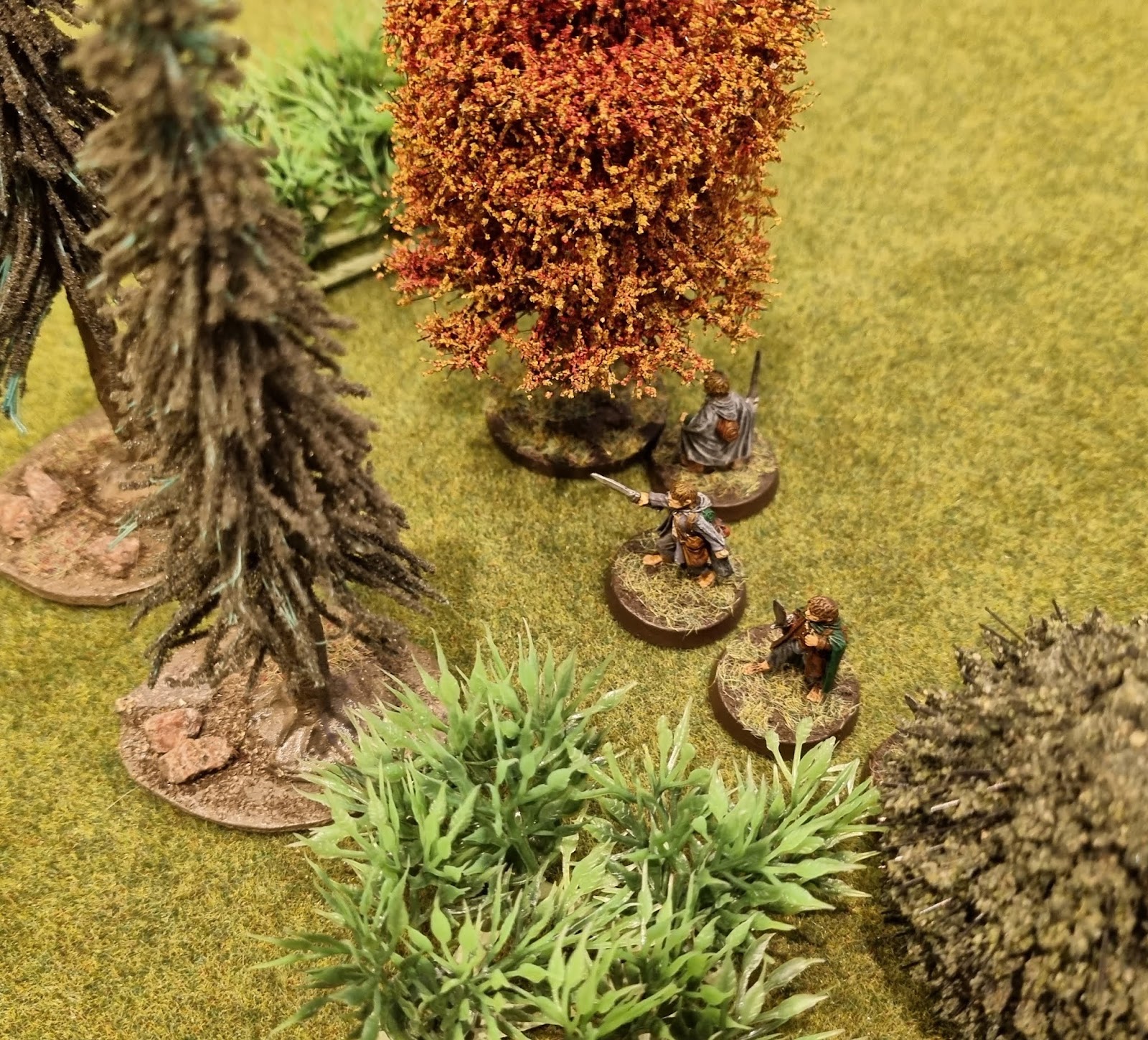 This was confirmed shortly afterwards when they found themselves surrounded by trees. Pippin succumbed to the whispering song of the trees, but immediately shook off the enchantment as the hobbits tried to chop their way clear. 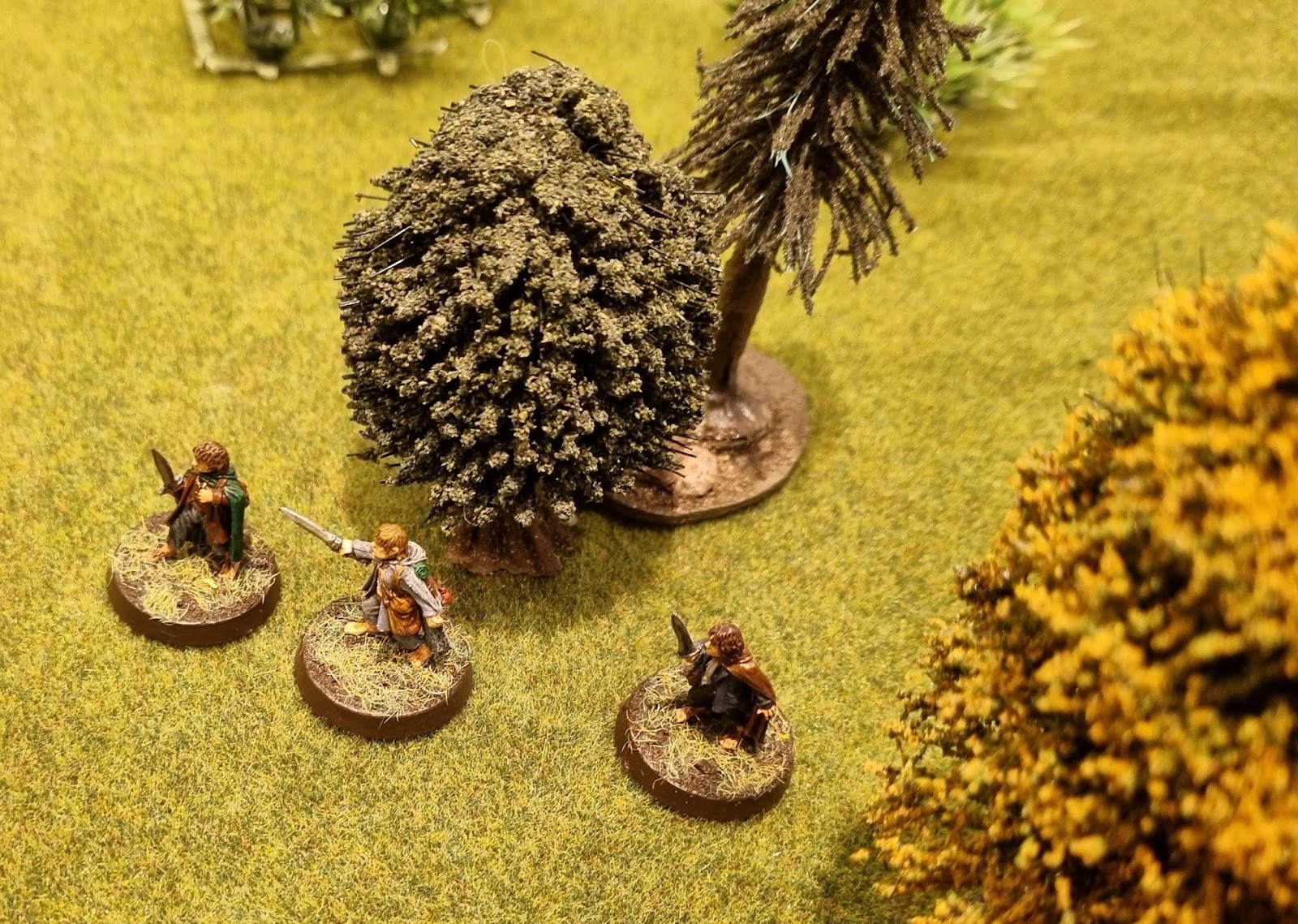 Frodo and Sam took turns to spend might to seize 'priori-tree' and allow the hobbits to begin to make headway. 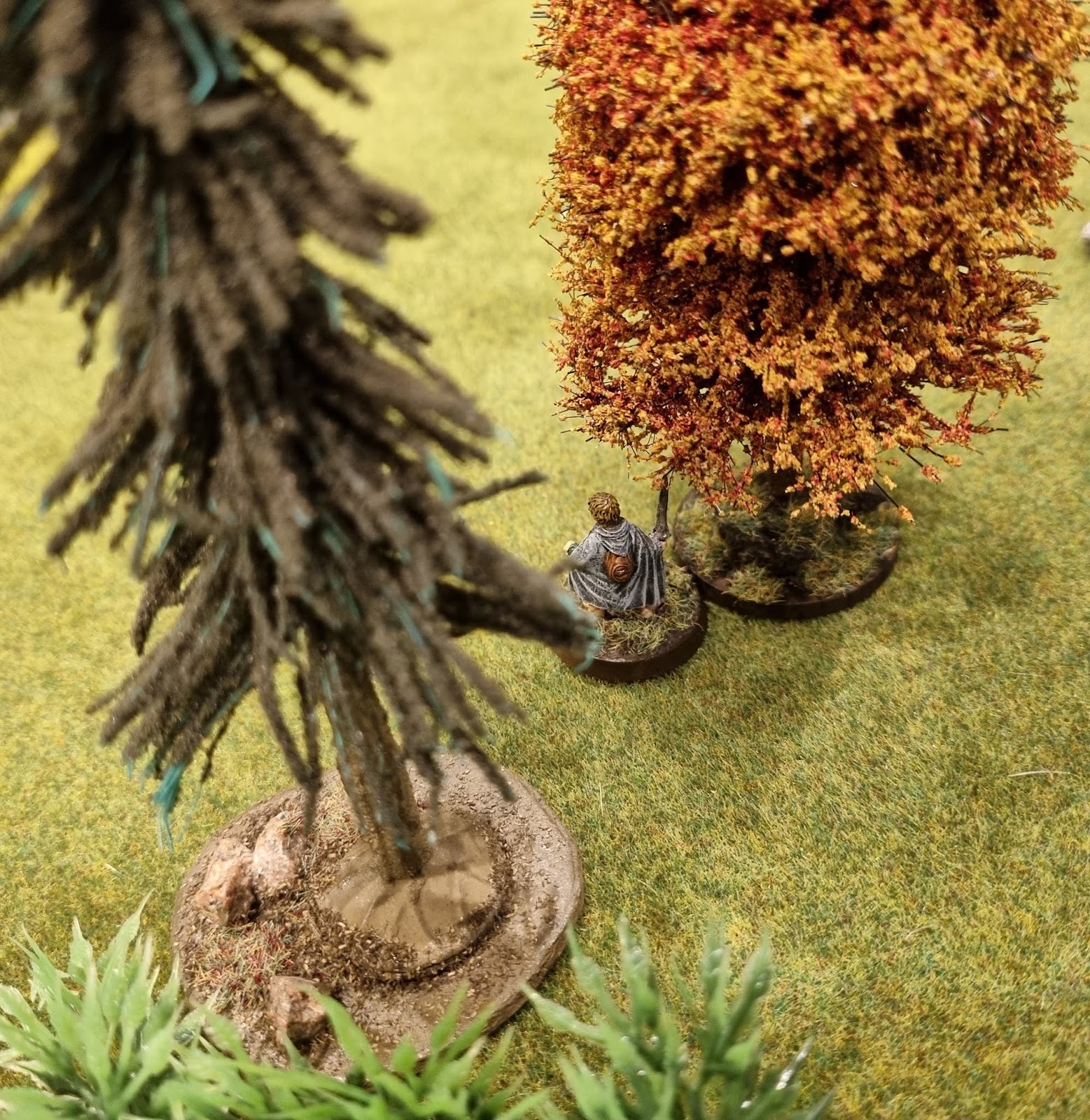 However, Merry found himself isolated and struggled to find his way through the forest alone. 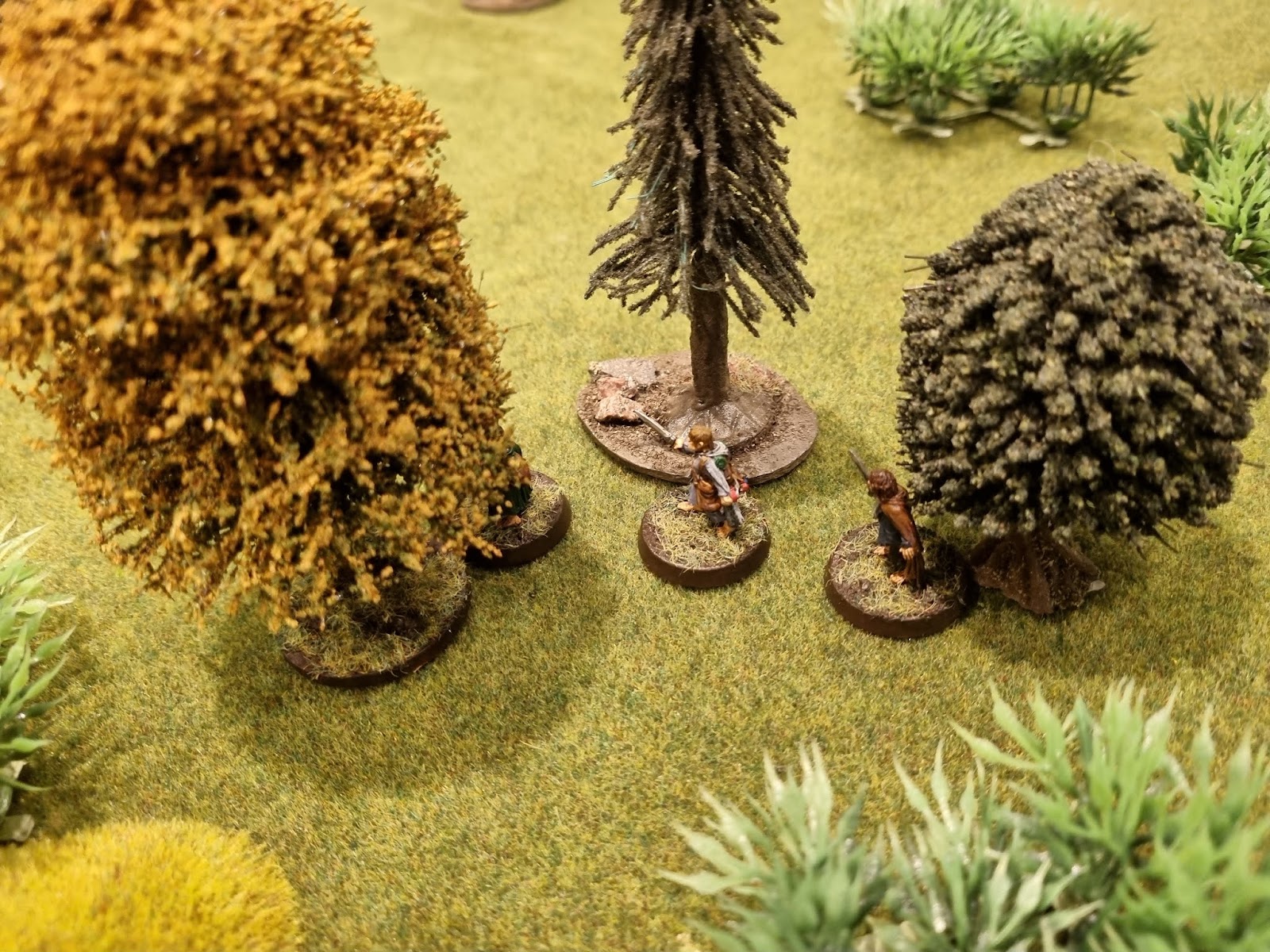 Eventually, Frodo and Sam's stock of Might ran out and the trees once again closed in around them. 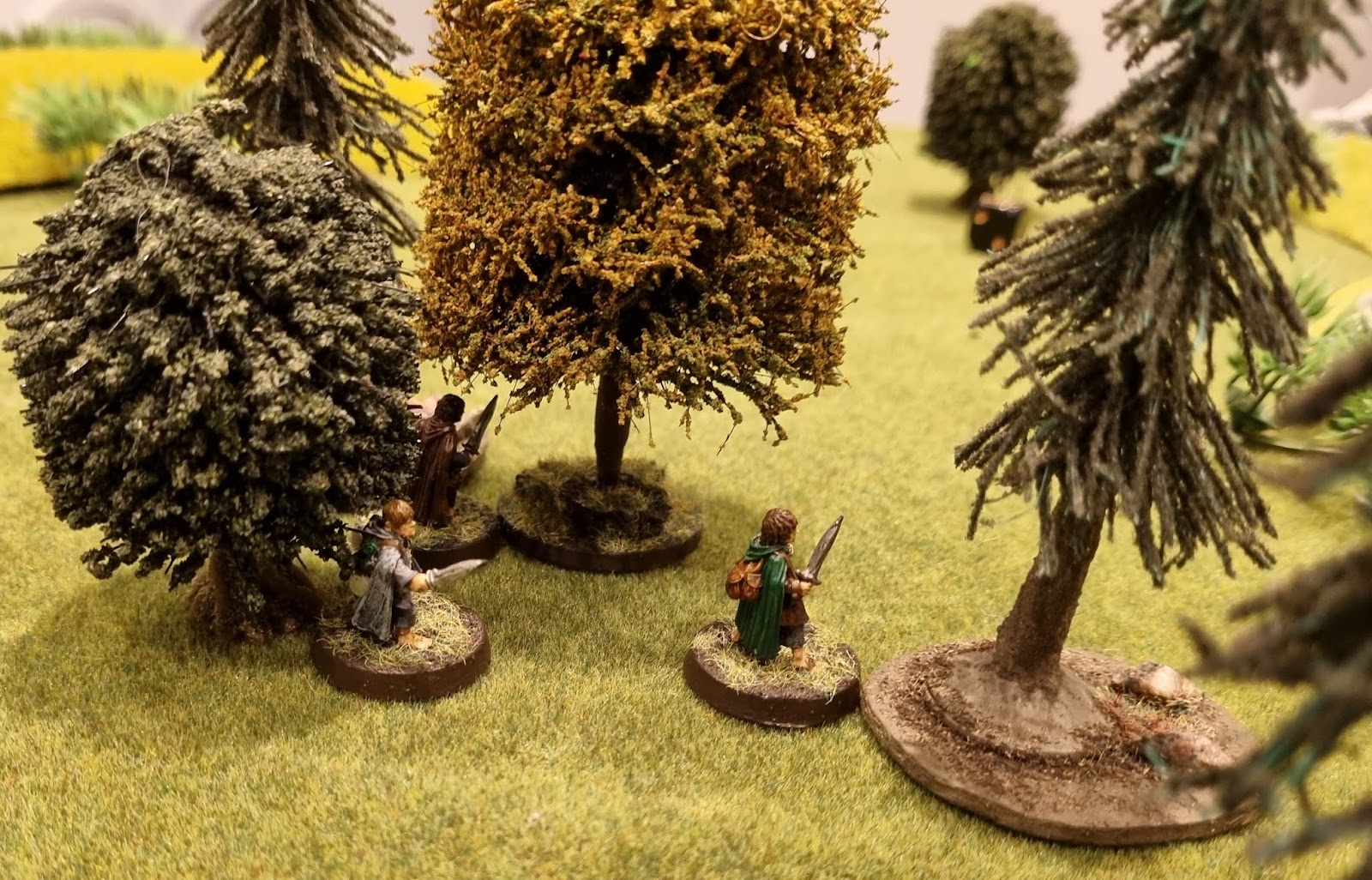 All three of the companions were assailed again. Pippin once again fell into a drowsy slumber which he couldn't shake off. 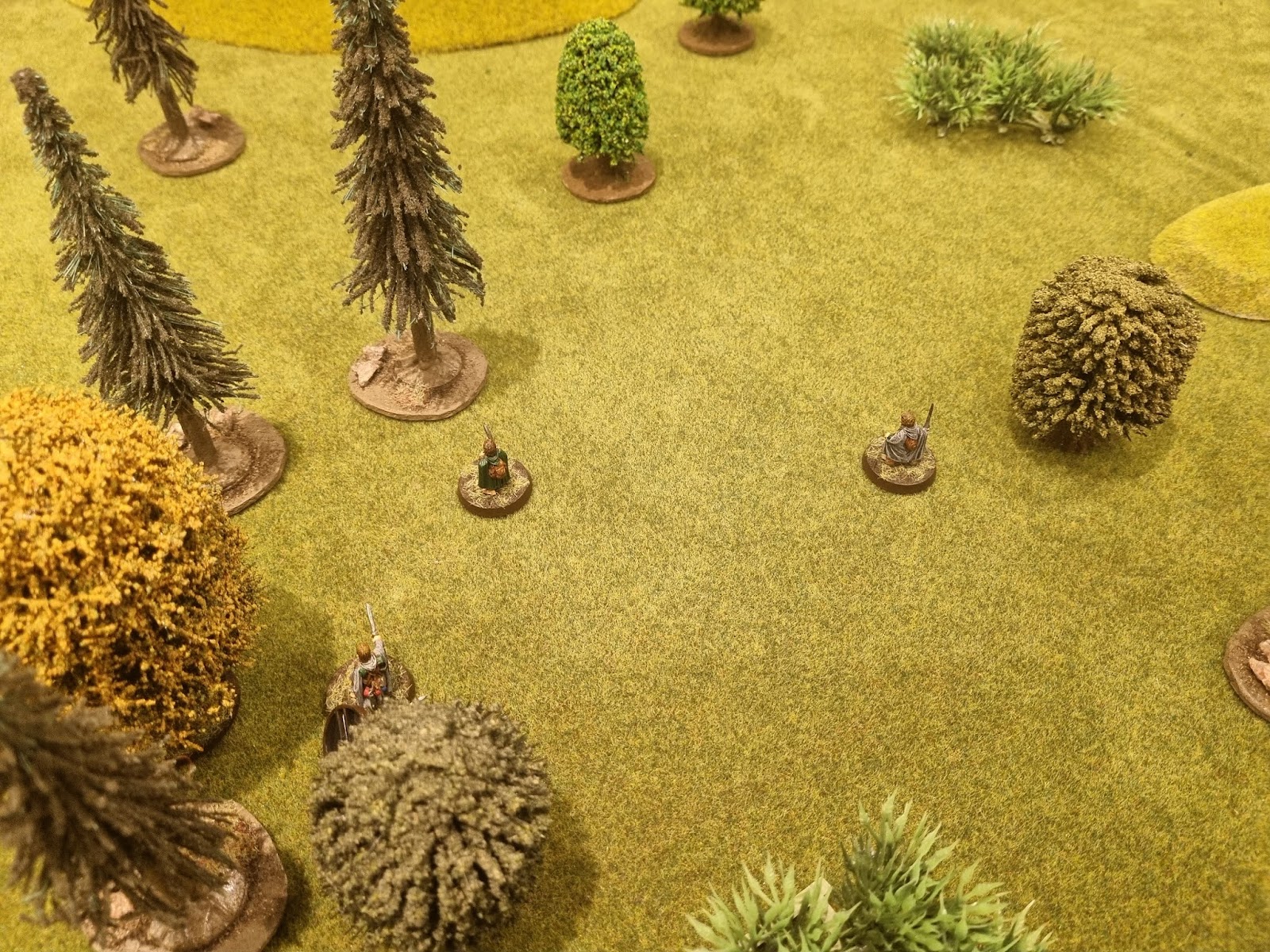 However, whilst Sam tried to help Pippin, Frodo made a break into a clearing in a desperate attempt to meet up with a bewildered Merry. 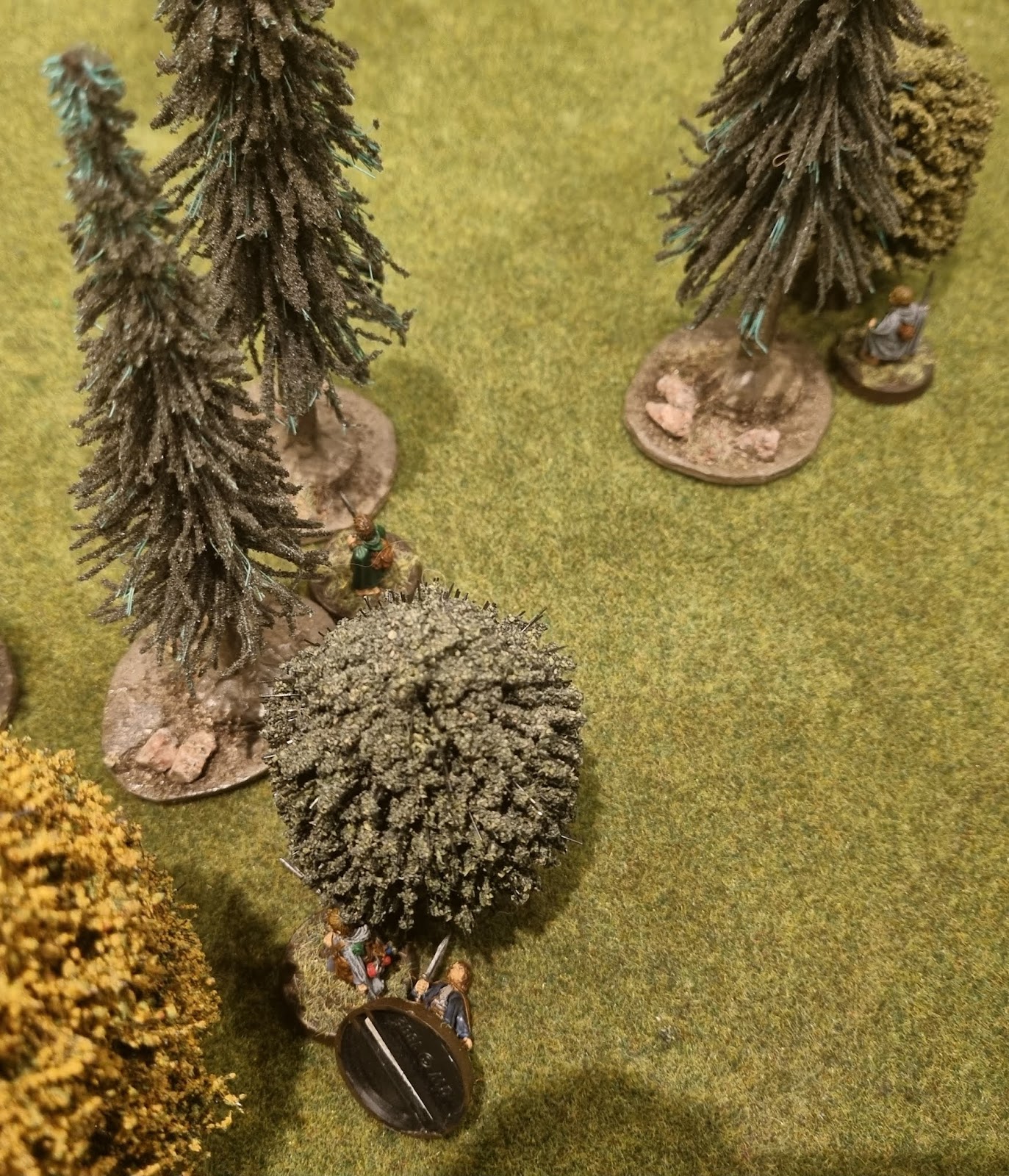 However, the trees once again closed in, and this time their enchantment overwhelmed each of the hobbits. Frodo was the last to fall, but fall he did.
Another scenario lost, but again without serious loss as the hobbits were paralysed, not wounded, and so I chose not to roll for injuries.
We decided that the bravest companion was Frodo, who had nern the last to fall, but unfortunately he only rolled a one for lost points and so would begin the next scenario with just a single might point.
The Fool of a Took was, once again, Merry for wandering off on his own, which seemed a good idea at the Time, but wasn't.
We now move on to the mysterious Barrow Downs, which might be a couple of weeks, as I need to buy and paint a few models for it.
However, if you were wondering how the hobbits managed to escape the Old Forest, that can be answered in the following extract from an unpublished draft by Professor Tolkien himself:
As he slipped into a slumber, the last thing Frodo heard, as if in a dream, was the sound of a cheerful voice singing, "Hey dol! Merry dol! Ring a dong dillo!"
"What the fuck is that nonesense?" thought Frodo.
Posted by Kieron at 03:11

Email ThisBlogThis!Share to TwitterShare to FacebookShare to Pinterest
Labels: Campaign, Fantasy, LotR, Quest of the Ringbearer